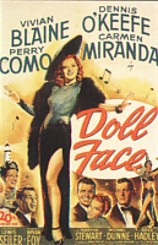 “Doll Face” (1946) is a musical comedy written by Gypsy Rose Lee, based on her early-40s semi-autobiographical play “The Naked Genius”. It co-stars Dennis O’Keefe, Carmen Miranda and Perry Como in one of the only 4 film roles he ever appeared in.

The musical acts in “Doll Face” are often cited as the film’s strong point, as is the zingy dialogue. However, the thin plot is only occasionally spruced up by snappy dialogue, and the sparsely populated dance numbers are far less entertaining than they were intended to be. The music is derivative and occasionally tasteless, which is surprising as the music was written by two important songwriters of the 1940s, Jimmy McHugh (music, “I’m in the Mood for Love”) and Harold Adamson (lyrics, “It’s a Wonderful World”). It’s hard not to notice the opening musical introduction sounds extremely similar to “The Five O’Clock Whistle,” more so than an original composition should.

“Doll Face” begins with a beautiful young singer, played by Vivian Blaine, and her manager Mike (Dennis O’Keefe) in the wings of a theater, anxiously awaiting a chance for her to audition in front of Broadway producer Flo Hartman (Reed Hadley, who is obviously playing Florence Ziegfeld). Blaine makes her way on stage and sings a beautiful rendition of “Somebody’s Walking in My Dream”, which becomes unintentionally funny when a full orchestral score begins to accompany her from out of nowhere. Man, that is one talented piano player. 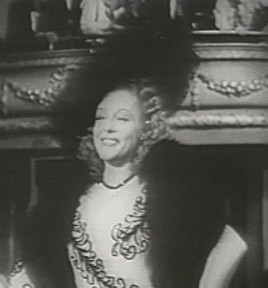 As she charms producer Hartman, one of Hartman’s assistants keeps getting more and more excited, and finally jumps out of his seat yelling, “Woo hoo doll face!” That’s when we realize Blaine is Doll Face Carroll, a local stripper trying to sneak into a legitimate Broadway play. She’s talented, but Hartman doesn’t feel a stripper has enough class for his show. Doll Face and Mike, who previously were speaking in classic American movie non-accents, suddenly turn on a harsh East Coast growl. When accused of not being classy enough, Mike informs everyone that Doll Face was once billed as “The Classy Chassis from Tallahassee, except she’s really from Brooklyn, but that don’t rhyme with nothin’.”

This begins the sadly short period of the movie where dialogue peps up the otherwise bland non-action. When Mike decides Doll Face needs culture or she’ll never get out of the burlesque (pronounced “bur-lee-cue”) business, a stagehand asks, “Culture? Ain’t that what they put on flowers to make ’em grow?”

Mike’s big idea is to have Doll Face write a book, called The Genius de Milo, and hire a ghost writer to add just the right amount of class. He approaches historian Frederick Girard (Stephen Dunne, here billed as Michael Dunne) for the job, and at first reluctant, the historian agrees after seeing the beautiful Doll Face. 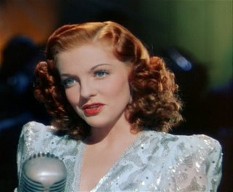 And Vivian Blaine is, indeed, beautiful, if a bit stiff in this performance; her performance in “Guys & Dolls” (pictured) was much better received. Oddly, she won a “best newcomer” Donaldson Award for her role in “Guys & Dolls”, which was made a decade after “Doll Face”. That’s a definition of “newcomer” I was not previously aware of.

Things pretty much progress just as you’d expect them to. Mike’s burlesque show features Doll Face as the stripper and headliner, Nicky (Perry Como) as the handsome young crooner, Chita (Carmen Miranda) with a novelty song-and-dance act, and Frankie (Martha Stewart) as the beautiful young ingénue just waiting for her chance to take over for Doll Face. The standard backstage shenanigans apply: Nicky is in love with Frankie, but she’s got a thing for Mike. Chita is the wise-cracking omniscient whose meddling makes sure the plot goes forward as it should. Unfortunately, Miranda mistakes a no-nonsense attitude with being angry at everyone all the time; one gets tired of Chita scowling in the background of every shot rather quickly.

The burlesque act is clearly supposed to be a popular, huge production, if the crowded lobby and enormous cut-outs of the featured stars are any indication (another moment of accidental humor is the doofy look on the cutout of Perry Como; 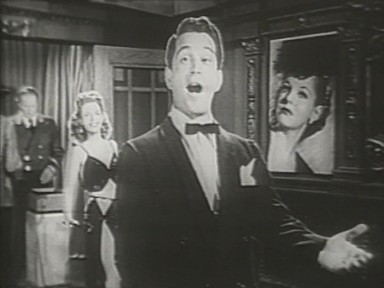 the poor guy must have had a terrible agent.) Despite this being a supposedly large production, we never see more than eight dancers on the stage at once, and the backdrops are nothing more than plain curtains. The numbers are unimpressive, with tuxedoed men in the background just standing around looking bored, or a few clumsy, unsynchronized girls wearing more clothes than a “stripper” rightly should — even for a 1946 film. Stanwyck wore considerably less clothing in “Lady of Burlesque” a few years earlier.

After the uninspired musical numbers, it’s time to introduce plot. The film touches on Frederick’s approach to Genius de Milo, an approach that can be best summed up as “lie, then lie some more.” He creates a fake backstory for Doll Face, including changing her childhood home from Brooklyn to Murray Hill, because Murray Hill is classier. “They won’t like that in Brooklyn,” Chita snarks in a bit of well-timed metahumor. 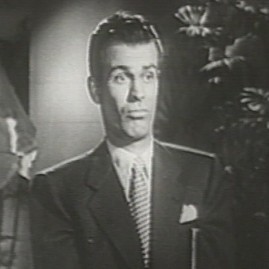 There’s got to be a wrench in the works, though, and this film’s wrench is Frederick, whom Mike is immediately jealous of. During a snazzy party, Mike lets his jealousy get the best of him, and acts like a spastic jerk to Frederick. Frederick’s response is an inappropriate, raised-eyebrowed, pursed-lipped look that just screams, “Girl, please.” Oh, the fun we have in this film.

Except for this one moment of accidental humor, Stephen (Michael) Dunne was truly terrible here, unable to exude the tiniest bit of charisma or charm, and wholly unqualified to play a highly-educated historian. He’s probably best known for starring in several “Alfred Hitchcock Presents” episodes, where he proved himself a much better actor.

By this point in the film, both Mike and Doll Face have long since lost their Brooklyn accents for no clearly explained reason. I guess it’s supposed to represent their new-found class. The newly classy Doll Face accompanies Frederick to a meeting, or a show, or something that’s not fully explained, except that it’s on an isolated island. As they boat over to the island, the boat runs out of gas and stalls, then a fog rolls in. As night falls, Doll Face inexplicably decides to swim to shore — a shore she cannot see — so Frederick follows her, swimming like a goofball so he can keep her leopard-print coat above water. No, I don’t know why. They make it to an island where they sleep in an alcove, waiting for rescuers.

After searching for hours, Mike finds Doll Face and Frederick, and assumes they have spent the night together in some pre-marital shenanigans. His theory is bolstered by the fact that their boat has somehow landed on the island and now runs just fine, so it appears that they deliberately landed on the island to be alone. Doll Face is so upset when Mike 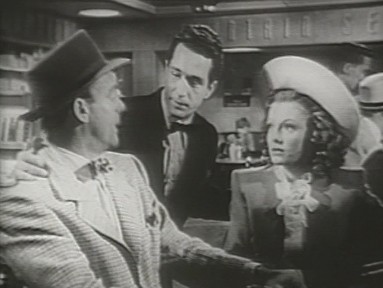 disbelieves her that she dumps him hard and starts dating Frederick.

Actually, she should be upset at Mike encouraging Nicky to resort to beatings to win the beautiful Freddie’s heart. Yes, Mike says that if Nicky would just smack Freddie around a bit, she’d come to her senses. I won’t keep you in suspense: later in the film, Nicky threatens Freddie with a smack in the mouth, and she suddenly loves him as much as he loves her.

Don’t despair, this is not the only nod to tastelessness in the film. Producer Flo Hartman’s show flopped — surely because he didn’t realize Doll Face was all class — so he’s looking for a new show, and wants to use Doll Face’s newly-published biography for his next production. She agrees and we’re off to rehearsals, where we see the swing number “Dig You Later (A-Hubba Hubba Hubba)” performed. This would be a delightful, jazzy bobby-soxer number if it weren’t for the lyrics praising the bombing of Japanese civilians in WWII. Note to Harold Adamson: The instant incineration of thousands of women and children isn’t a proper subject for a lighthearted, peppy song. 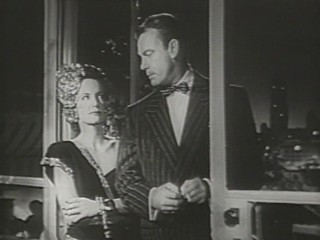 Meanwhile, Chita gleefully causes Doll Face and Frederick to break up, and pushes Mike to try to win Doll Face back. Doll Face wants nothing to do with Mike, so on opening night (in the world’s smallest Broadway theater, a little dinky place that seats maybe 200 people) he files an injunction against the “Genius de Milo” show, stating that Doll Face is still under contract to him and cannot perform for Hartman. The show gets held up while he talks to Doll Face, convinces her to like him again, which she does, the end.

Dennis O’Keefe is probably best known for his small roles in dozens of films, such as “A Star is Born” and “Theodora Goes Wild”, both of which were playing on TCM as I compiled this post. His movie roles dwindled a bit in the 1940s, and by the 1950s he moved to television, where he starred in his own show in the 1959-1960 season.

Gypsy Rose Lee started out in burlesque as a secondary act to her sister June Havoc. When June eloped (reportedly at 13 years old, but really closer to 16 – her mother had lied about the girls’ ages for years) the act ended, and Gypsy found herself doing a solo strip act. Initially stripping in seedy joints, she used “intellectual” humor to make her act more mainstream. With no shortage of ego, she had no problem marketing herself as a genius in the rough or editing her life story to make it more marketable. Her fictional yarns always feature a predictably intelligent stripper who often learns a valuable lesson: the upper classes are inferior and less appealing than the common or middle class. It’s certainly a crowd-pleasing tale, yet Lee felt compelled to tell it too many times. In the 1940s she starred in several Broadway plays, including the Mike Todd-produced “The Naked Genius”. After her novel The G-String Murders was made into the film “Lady of Burlesque”, she had enough leverage in Hollywood to sell the idea of “Doll Face” to 20th Century Fox. By this time, I suspect the public had grown tired of the story. 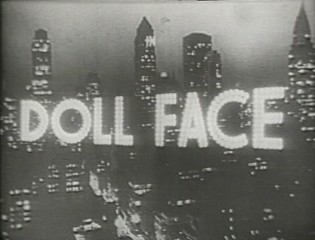 While the film seems to accurately present the type of burlesque acts common to the 1920s and 1930s, it seems to be set in the then-current year of 1946, as the songs and dance numbers are clearly post-war. It’s hardly likely that this could have taken place in 1946, though; burlesque was outlawed in New York in 1937. I would love to know what contemporary audiences thought about this anachronism.