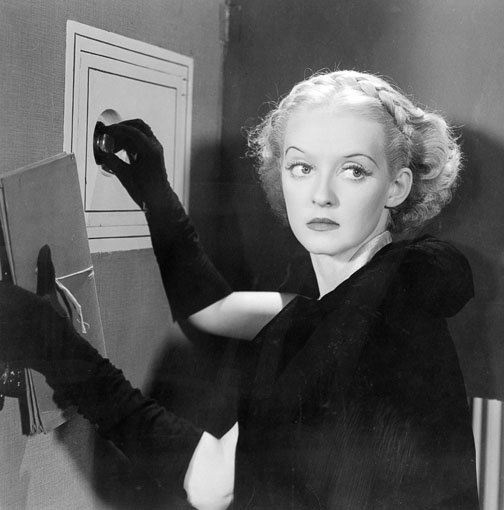 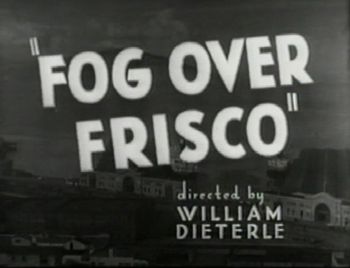 Bette Davis is Arlene, hard-partying step-sister to Val (Margaret Livingston. Again. Sigh.) Arlene is also girlfriend to rich dude Spenser Carlton played by blog fave Lyle Talbot. Arlene hangs around wild bars that are owned and run by gangsters, and even though Val goes with her, she doesn’t realize the evil what lurks about these places, because Val is angelic and perfect and blah blah blah. They even wear color-coded gowns when they’re at the club together, Val in white, Arlene in black. 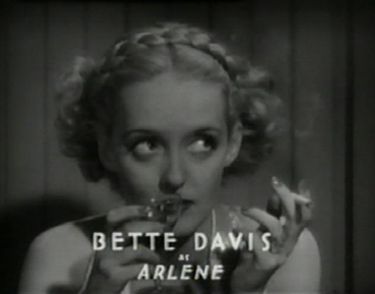 While drinking and dancing at the mob-run club, the boss borrows Arlene’s car and puts a stash of something stolen in her glove compartment. These turn out to be stolen securities and bonds, and Arlene, being the daughter of a famous and wealthy banker, has the ability to fence them for a cut of the profit. Boyfriend Spencer helps with the laundering — he works in Arlene’s father’s bank and has connections — but he’s so worried about the scam that he refuses to do it any more.

Arlene’s father (Arthur Byron) is en epic douchebag the next morning, ranting against Arlene’s partying and pictures in the society notices as though she was the most immoral person in the world. He doesn’t know she’s fencing stolen securities, he just knows she’s in the paper. As though this were some Gothic novel, he pronounces Arlene no good because her mother was no good, and threatens to commit her to an insane asylum if she’s involved in even one more society page scandal. Way to keep the perspective there, gramps.

Val worries about her step-sister, but is also mad at her boyfriend, Tony (Donald Woods), who wrote some of the society articles that have her dad so upset. She basically dumps Tony because of it, and chases off Tony and his pal photographer Izzy (Hugh fucking Herbert. Again. SIGH.) 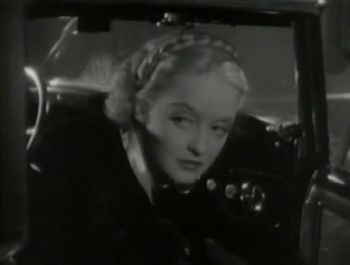 Arlene gets a phone call and runs off to meet the mob boss, but not before putting her engagement ring in an envelope and sending it back to Spencer. After Arlene meets with the mob boss, she goes to meet someone else. At the same time her dad goes to work and discovers the bond scam and calls Spencer in; he’s more upset that Spencer was “manipulated” by Arlene than he is about his own daughter. Oh, he threatens to shoot Arlene, too. Nice.

Arlene meets a man at his apartment, another man who works for her father and who is demanding some scandalous love letters he sent to her back. After this meeting Arlene never arrives home. What has happened to her? Well, for once I’m not going to tell you. Watch it in a week and find out!

“Fog Over Frisco” is not a bad movie, I really kind of liked it up to about this part of the film. Of course, there is the little matter of Hugh Herbert, who is rapidly becoming my least favorite actor in the world. At least he’s standing next to William Demarest much of the time, whose awesomeness somewhat negates the Hugh Factor. Margaret Lindsay is not my favorite actress, at least not when she was younger. I think she’s tremendous in her character roles in the 1950s and early 60s, after she lets go of this smugness that pervades her 1930s work.

Bette is so pretty in this film, vivacious and lots of fun. Her room is a fabulously appointed affair that I tried (and failed) to get some good screencaps of. Still, two small and fuzzy screencaps are better than none: 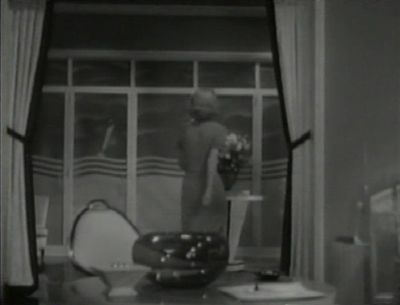 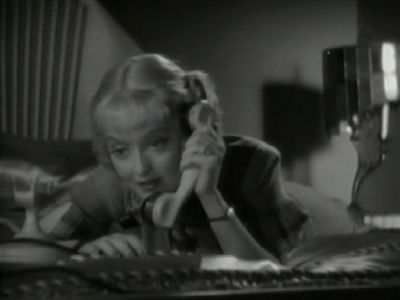