Last week on Raiders of Ghost City! A kidnapped Cathy is rescued by Steve! Idaho Jones wanders off for a while, chasing Bull Bats! Bill, the Wells Fargo stage driver and secret Prussian mole, is felled by poison food! Every single good guy left in the serial rifles through the dead Bill’s stuff! The native Modoc Indians are threatening to attack the town! The raiders fake robbing the Golden Eagle saloon to give Alex and Trina an alibi and protect their secret identities! Steve jumps on the heads of not one but two henchmen! Then Trina shoots both Rawhide (on her side) and Steve (not on her side) and glares at their presumed corpses!

We return to our serial during the shootout where the raiders pretend to rob the Golden Eagle, while Rawhide runs off with a suitcase — this serial is very concerned with luggage — and Idaho Jones shoots as many raiders as he can. In the melee, Hank the bartender, either a cohort of the Prussians or a secret Prussian himself, is killed. None of you will care because Hank was not a character that was necessary in the serial, so he and his ridiculous sideburns will not be missed. Yet the rate at which we are losing henchmen is alarming, and a clear indicator that we are getting close to the end of this fershlugginer thing. 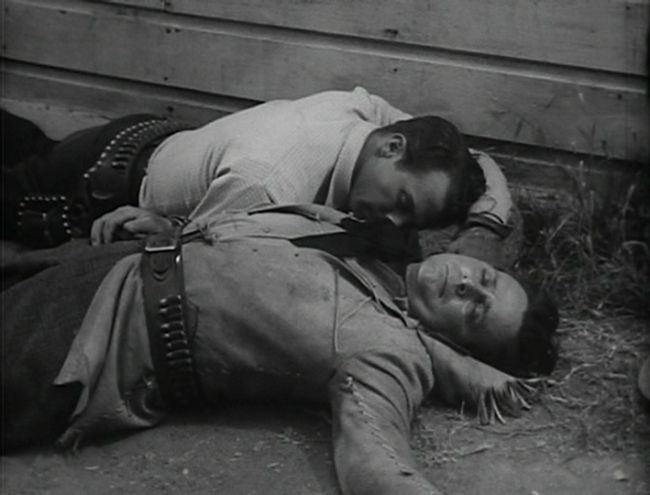 Steve and Rawhide lay spent in the dust.

But wait! Steve was just playing possum! He alerts a recently arrived Idaho of the threat in the window above where Braddock and Trina are watching. 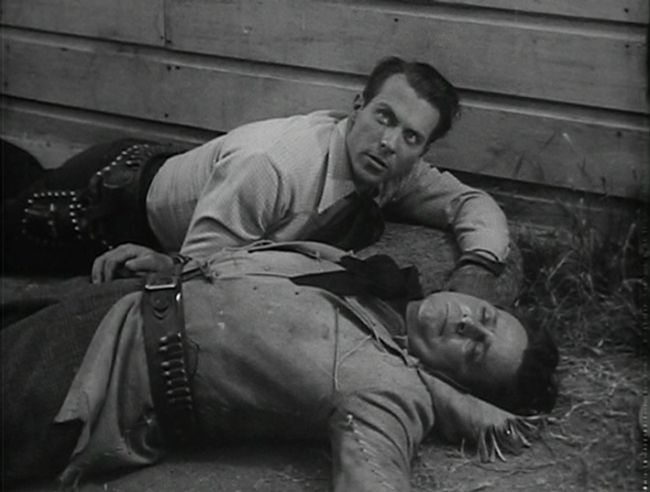 The bad guys retreat and Idaho and Steve run off with this important luggage, leaving Rawhide’s sweaty corpse behind. Farewell forever, Rawhide, and thanks for leaving your fringed jacket to Neil Diamond in your will.

Steve gets to the Wells Fargo and opens the important luggage to find papers detailing the Prussian’s plans. He was able to ascertain this because he can read German. 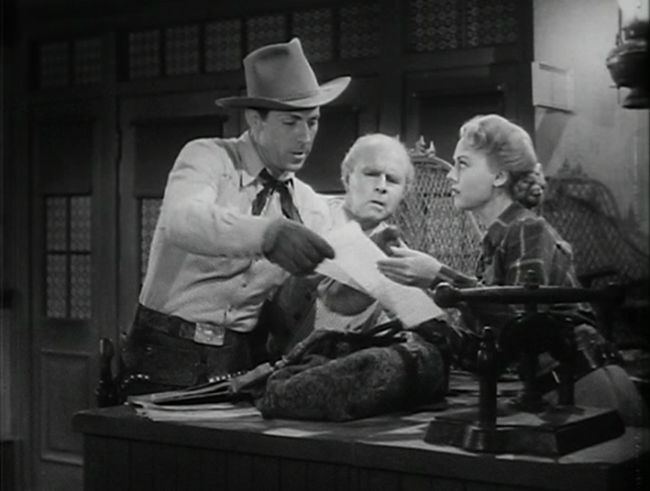 Steve is bilingual. Mmm hmm. Cathy’s expression speaks for us all.

It would be poor form if I did not point out that the recap for this chapter showed footage of henchmen riding out of town with these exact same important papers, though not with the important luggage but apparently in another type of container. There’s even a title card telling us the papers were headed out of town on Alex’s orders. Yes, Chapter 11 has told us that the papers were being ridden out of town and that they were in the Golden Eagle, liberated by the now-dead Rawhide. I love that Raiders is both boring and confusing.

Bull-Bat Jones is mostly fooled by the fake raid on Trina’s and Alex’s saloon and lets them go free, allowing Alex to scurry off somewhere to make sure the stolen gold can be transported out of the country. Meanwhile, Col. Sewell has arranged for the chief of the Modoc tribe to communicate with President Lincoln via telegraph, in an effort to keep the peace. While this serial is blatantly racist about the Native Americans and makes it sound like they’re just over-sensitive savages, I remember a bit about history and suspect the U.S. government was trying to pull yet another fast one on the indigenous peoples of North America.

So the telegraph meeting between the chief of the tribe and Lincoln is scheduled when… wait, did I ever tell you guys what day this was? 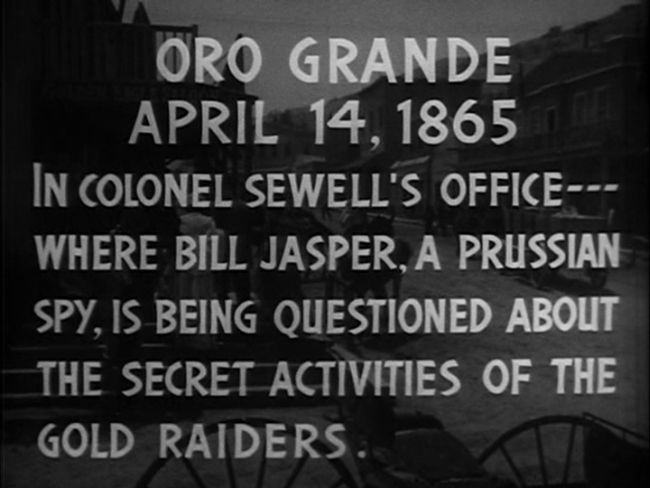 Seems I left out a very important detail in the last recap, which was totally accidental, heh heh heh. Those of you who have seen the hard-hitting documentary film Abraham Lincoln: Vampire Hunter already know what’s in Lincoln’s immediate future: A rousing presentation of Our American Cousin at the Ford Theatre.

So not only will the Modoc tribe be unable to discuss anything with Lincoln, we now know why “president” was overdubbed with “Fesserman:” So the chinbeard can return to the serial even after Lincoln has been killed off. Off-screen, of course, because Raiders is nothing if not tasteful. All hell breaks loose when the news of the assassination reaches Oro Grande, and Trina, the only Prussian with any brains in that outfit, immediately conjures up a cunning plan. She sends Buck out to contact an agent they have installed at the Modoc tribe, instructing the agent to tell the Modoc that Lincoln simply refuses to talk to them, which will make them angry enough to raid Oro Grande. This will provide enough distraction that the Prussians can make off with the gold unimpeded. 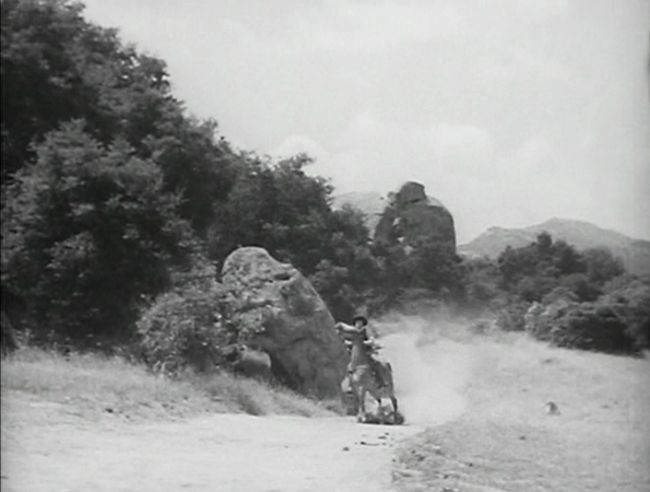 Cap Rock in the background. 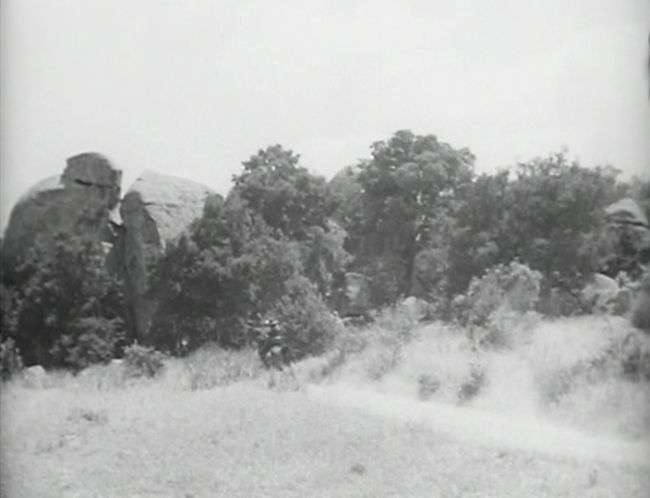 About 30 seconds later, Cap Rock again, this time with flipped footage to make it seem like a different locale. Convincing, non? As EDL said, “How much fun is one location researcher allowed to have?” All the fun, EDL. All the fun in the world.

When Col. Sewell can’t get a telegram through to his men posted near the Modoc village because the telegraph lines are jammed — kind of like the Internet outages the day Michael Jackson kicked it, only for something less important — Idaho Jones is sent out to tell the soldiers what has happened and to try to keep peaceable relations with the Modocs. Because he is an idiot, he goes to the Modoc village instead, as though a man who gets distracted by bull bats would have the ability to converse with people who don’t speak English and enjoy a culture he has no familiarity with. When he gets there, he see the bad guys yukking it up over Lincoln’s death.

“And then he says, ‘Whatever you are, be a good one.’ What the hell does that even mean?“

Soon the Modoc notice Idaho’s presence, and that’s when a bunch of extras in bad wigs and Native American tunics jump on Idaho and try to snuggle him to death. 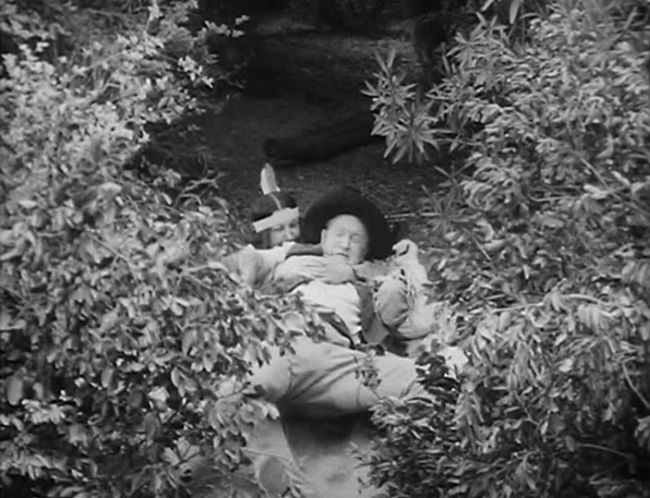 Cathy sees and stifles a yawn. 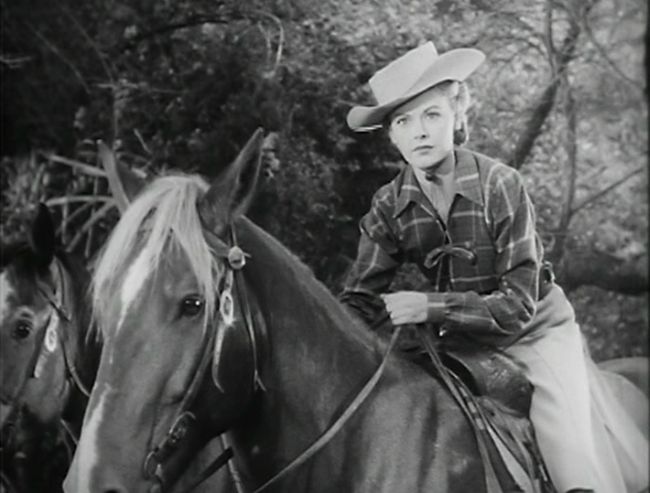 She rides back to town to get help and Buck is in hot pursuit, while Idaho is strung up by both legs by the Modoc, during which he says nothing and has no expression on his face, not even while the Prussian provocateur Burke menaces him with a piece of paper. 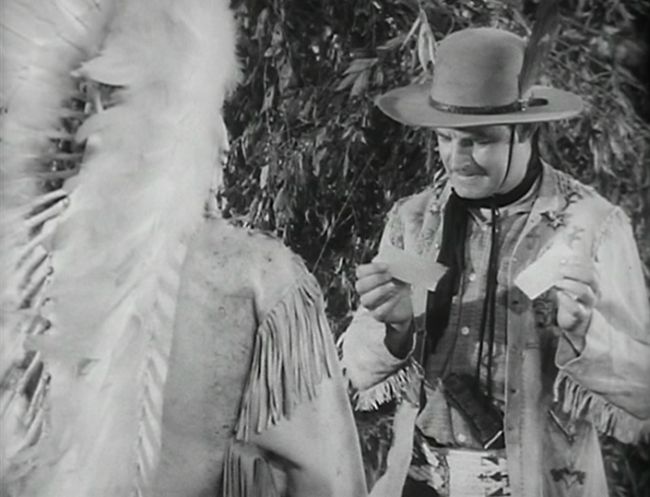 This guy was on “Bonanza.” No, I’m not going to tell you more, you go look it up you care so much.

I would like to take this opportunity to complain bitterly about the number of incidental characters in this serial who have names that begin with B: Burke, Buck, Braddock, Bart, Bill, even Doc Blair. Screw you, serial. I’m going to have more fun with rocks. 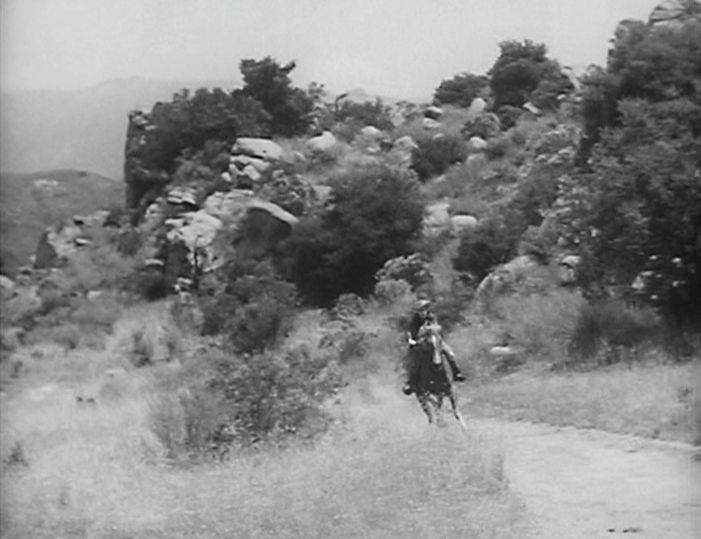 Per EDL, the above scene was also shot at Iverson Movie Ranch, and you’ll notice the shrunken head Andy Capp kind of face in the slew of rocks.

There are a lot of rocks and background hills in the chase between Buck and Cathy which can also be seen in EDL’s screencaps of the 1980 B-movie adventure flick The Tomb. It’s interesting to contrast the scenes because many appear to have been filmed from exactly the same angle. Here are some of the hills: 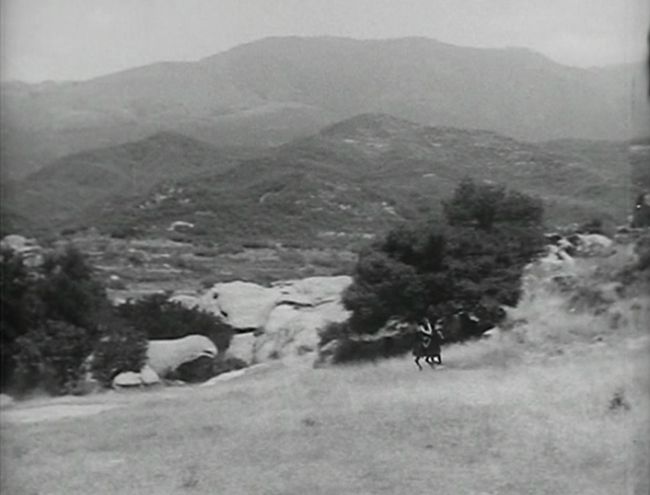 EDL wouldn’t tell me the name of the twin peaks above because he is polite, which is why he refers to that elongated rock at the bottom left as “tamale” and not the name I would have given it, because I am, at heart, a 12-year-old boy. That’s why I can only assume those two hills are called Boobs Mountains. By the way, that sound you hear is EDL regretting ever encouraging my interest in Iverson.

As Cathy and Buck race past breasts and tamales, the Modoc strap each of Idaho’s legs to a bent branch in a sort of informal drawing-and-quartering type of set-up that looks like it’ll be a real bitch to clean after use. Again, Idaho says nothing. We’re shown the Modoc cutting the ropes that hold the branches down just as the serial ends. Oh no! Idaho is going to be ripped into two parts! Except probably not. But at least we got through an entire chapter without any corpse-robbin’.

Before you get all excited, this serial goes for 13 chapters, not 12, so the next chapter is not the finale. (And early readers of this post will know I originally labeled it as Chapter 12, which tells you just how much I wish this serial was over with. Lots much.)

Now, you’ll notice on the poster for Raiders, just to the right of the love that dare not speak its name are two Modoc snooping about, so with the caveat that my hypotheses have not exactly been stellar during this serial, I suspect the finale is going to involve an Indian raid and some dynamite. Or maybe that barrel labeled TNT is just full of TNT Brand hamdingers. Don’t know; don’t really care.