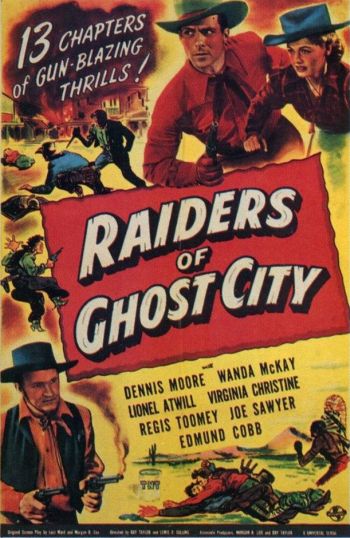 Last week on Raiders of Ghost City! The Civil War ends! Confederate Capt. Clay Randolph discovers the people he has been working for while stealing Union gold are actually Prussians, taking the gold for themselves and not sending it to the Confederate Army as he had thought. He decides to surrender to the authorities and tell them everything he knows about the raiders when Buck, one of the henchmen, rides up behind him and shoots him! Steve goes running off after the killer, but gets his torso caught up in a lariat hung around a tree branch by the raiders. Captured! Meanwhile, in town, Clay manages to give Cathy one of the 1752 coins that have been showing up as clues, but he has no time to say more before the cold hand of Death touches him.

In the recap, there is a little additional footage of Regis kicking it. The new footage is a few lines where he gets closer to revealing who is behind the gold robberies. He croaks before he gets a chance to finish his sentence — and he almost literally croaks, plus crosses his eyes, in a death scene that isn’t as bad as his infamous death in Alibi (1929), but which is not good by any measure. 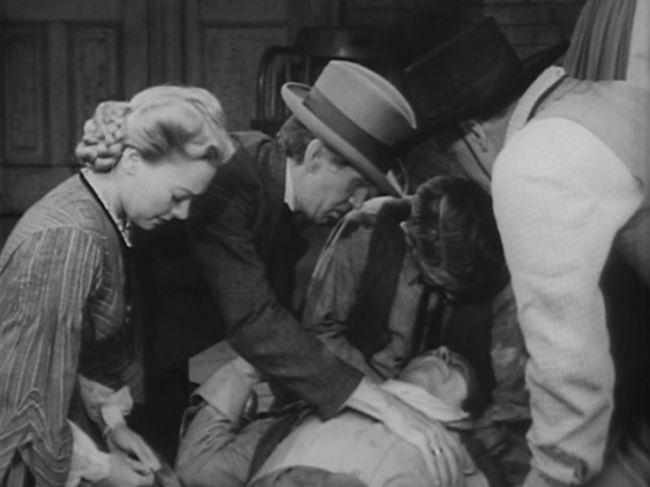 Coins! There are a series of European coins, all dating to 1752, found on the bodies of those killed by the raiders. The one the Toomster was holding was this worn-down little beauty from The Netherlands, but — and this will be exceptionally exciting for coin collectors and trivia mavens everywhere — it wasn’t an old coin at all. 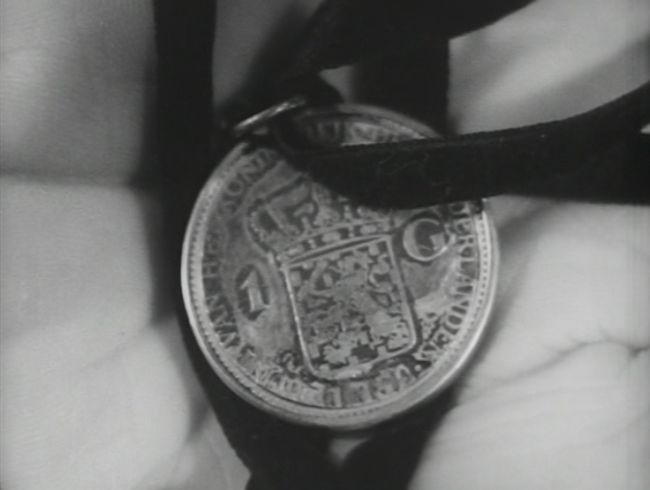 While a background very much like this was used back to the 1700s, those featured the date to the left and right of the shield. By the 1930s, the date was below the shield, just as it is here. The date on this coin used in the film also looks pretty suspicious; if I’d seen that coin the wild or in a collection, I’d know immediately the date was the product of someone scraping on it to make it look older. This was not an old coin but a relatively new coin futzed with by the (wait, “futzed” is a word recognized by spell check?)… er, ahem…  futzed with by the prop people to make it appear to be two centuries old. 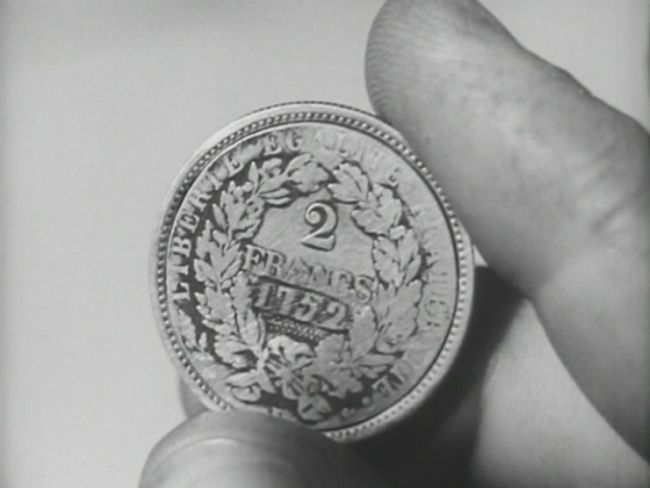 It’s probably a coin from the 1800s, like this one, also modified by the prop department. This one kind of upsets me, because by the time of filming, it was already a 100-year-old coin. Ruined for a serial! It wouldn’t have broken the budget, because even today you can get one of these circulated coins for about US$20. (Yes, I used to collect coins. I am vast, contain multitudes, etc. etc.)

Back to the show: As we saw last week, Steve got himself lassoed by the armpits by Buck (not Braddock; I’ll get to that in a minute) and the rest of the raiders start to shoot him as he hangs there. Steve goes limp and is lowered to the ground. 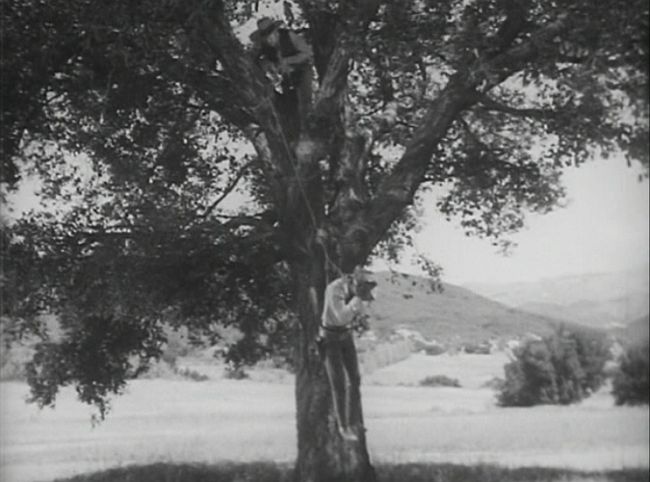 I know this screen grab is a little disturbing, but I promise you the rope went around his pits, not his neck. You can also see the stuntman still holding on to his hat so it doesn’t fall off, despite playing an unconscious man. Production values? Raiders of Ghost City don’t need no stinkin’ production values.

Steve is wounded but unconscious, and the raiders take him back to the mines underneath the abandoned stable in Ghost City. They plan on questioning him, but he pretends to be unconscious at first, and later, he pretends to have amnesia. 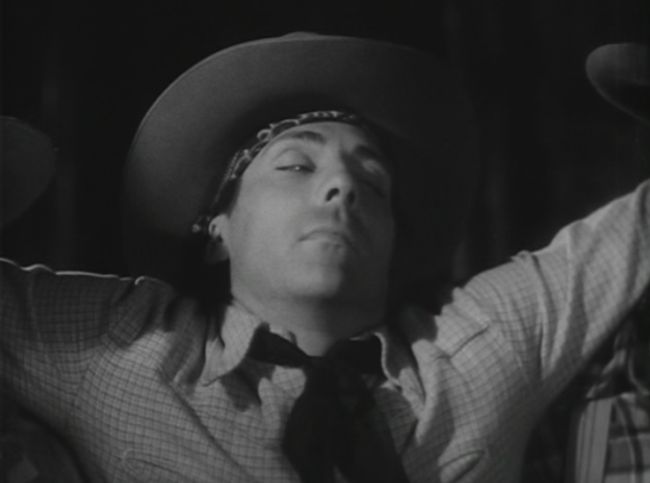 I dunno, man. That’s pretty subtle. I’m not sure the folks in the back row will be able to tell what’s going on. 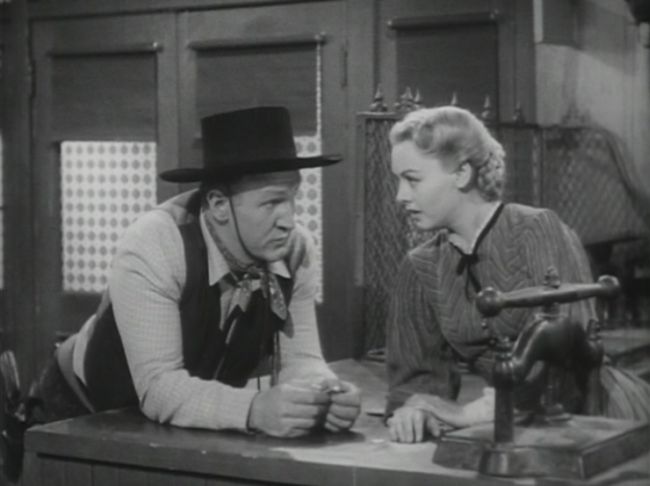 Idaho and Cathy worry about Steve, who they haven’t seen since he rode off to try to catch Regis’ killer. The Union Army has left because the war is over, so Idaho and Cathy have no help — as if the Cavalry was much help in the first place — and they have no idea where Steve could be. Which is rich, considering Idaho and Steve were just in Ghost City in the last episode, and Idaho presumably knows Steve was caught in that Times Square bookstore abandoned building with a half dozen strange men’s guns — no, wait, guns is right — with men’s guns pointing right at him. I can only assume head blows, controlled substances or congenital stupidity prevented Idaho from checking out Ghost City.

Suddenly, the Wells Fargo arrives with a new character! 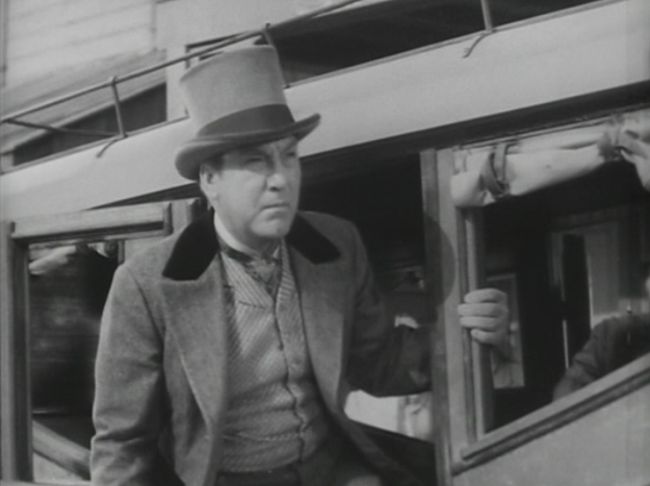 No, it’s not Professor Marvel, it’s Count Manfried von Rinkton, with the super amazing American alias of Carl Lawton. He’s played by Emmett Vogan who was a utility player for decades, appearing in pretty much anything you can think of, except Key Largo. And Moonstruck. Rinkton here, besides having a total weanus of a name, is the leader of this particular group of Prussians out to collect gold for their country. Trina recognizes him immediately and brings him down to the secret code-breaking lair of sexy supervillainy, where he reveals the startling reason behind the Prussians stealing Union gold: 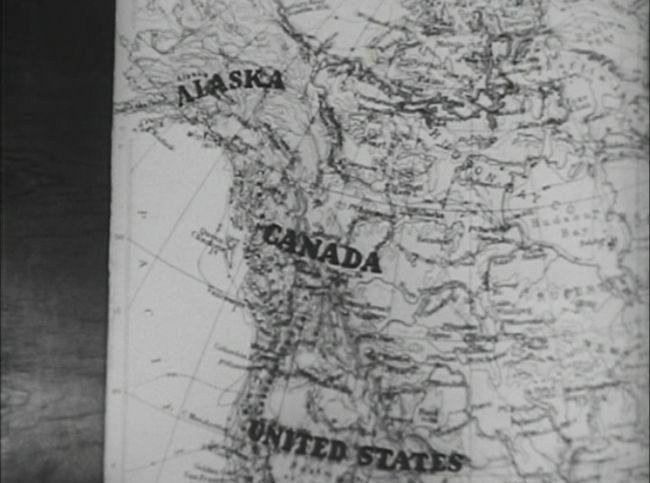 Maps! He wants to buy a lot of maps! Wait, no, that’s not right. Let me check my notes…

Russia is in the market to get rid of that little piece of land up there known as Alaska. Prussia secretly wants it for themselves as a “club” to hold over Canada (still under British rule at the time, until 1867) and the United States. They have been stealing Union gold to fund this venture, which was part of their bigger plan to have a united German empire by 1870, then conquer the world. These are indeed the years just prior to the Austro-Prussian War, so clearly someone broke out their 7th grade history books to craft this fine piece of cinema.

Rinkton shows up in the mines just in time to stop Steve from getting away, after having fooled the henchmen into half thinking he was really injured. Rinkton, being a dirty nasty Nazi er we mean Prussian, concocts this Lynchian idea to turn a natural waterfall in the mines into a tub, tie Steve up and put him in there, forcing him to tell all or drown. 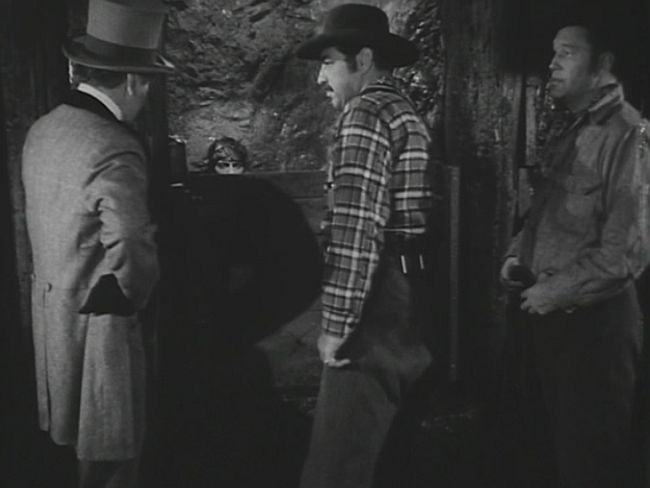 Steve’s angry eyes are peeking out over the top of the makeshift tub, and it is hilarious. I imagine well-established crankybutt Dennis Moore gave everyone this look: Agents, co-stars, parking attendants, carhops, judges, milkmen…

Meanwhile in Oro Grande, Idaho and Cathy finally get their shared brain cell working and realize that local nogoodnik Rawhide probably knows something about all these doin’s and goin’s on. 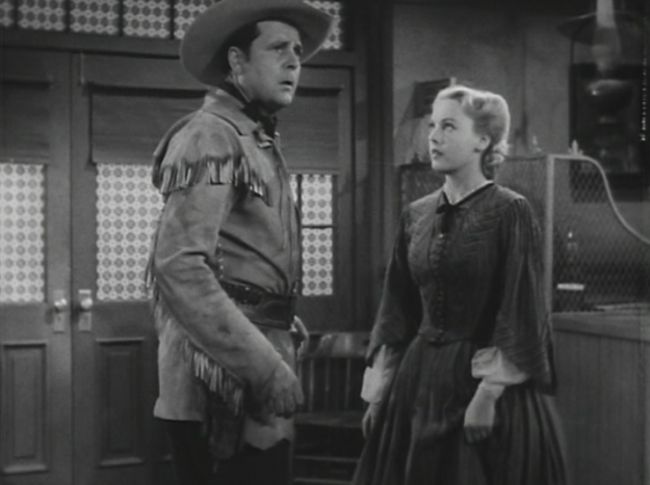 Cathy tricks Rawhide into the Wells Fargo office while Idaho gets the doctor. He returns, punches the hell outta Rawhide, then ties him up and gets the doctor to (get this) pretend to have injected Rawhide with poison! They wave some pills in front of him, pretending they’re the antidote, and tell him he either has to talk or they will let him die. And these pills are (seriously, get this) sleeping pills, which they allow Rawhide to take an entire bottle of once he tells them where Steve is being held. 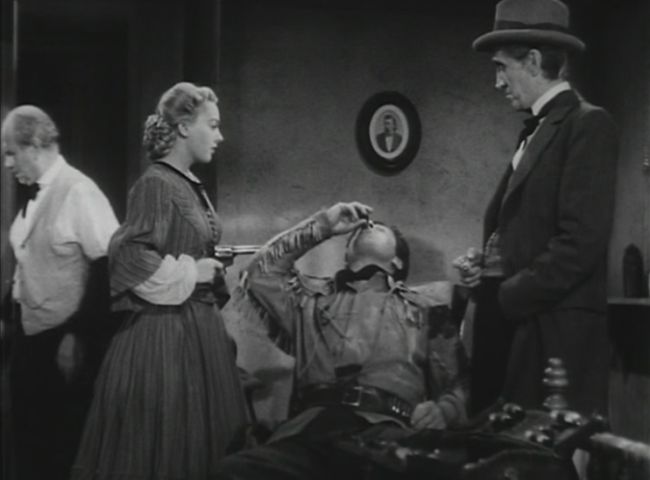 Rawhide gets loopy. “I feel like an angel. I’m flying!”

The doctor just laughs as Rawhide passes out. Yes, Doc, that is a super good example of the Hippocratic oath. Perhaps the town doctor is, like the judge in Warlock (1954), not a real doctor but a doctor “on acceptance.” Either way, this is a shit thing to do. You good guys? You suck. 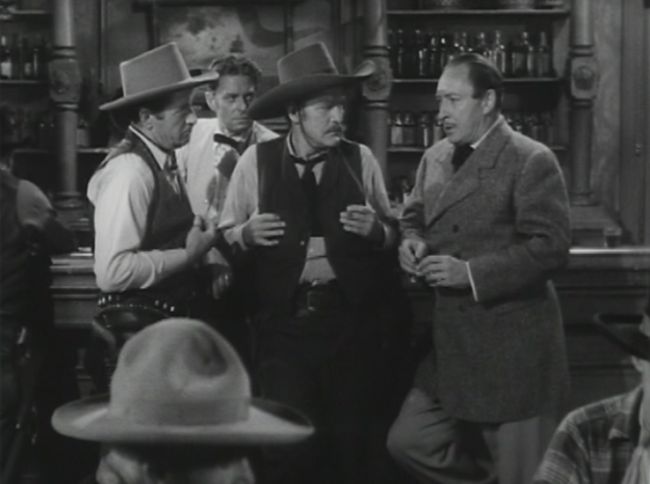 More character clarification time! The guy who rode up behind the Toomster and killed him was not Braddock, as I said before, but Bart, the feller in the center here. Braddock (Jack Ingram) is on the left, Bart (Jack Rockwell) in the middle, and Alex (Lionel Atwill) on the right. Bart has a larger role now, probably in anticipation of Rawhide (Edmund Cobb) being indisposed, which means lead henchman Braddock doesn’t have a sidekick. 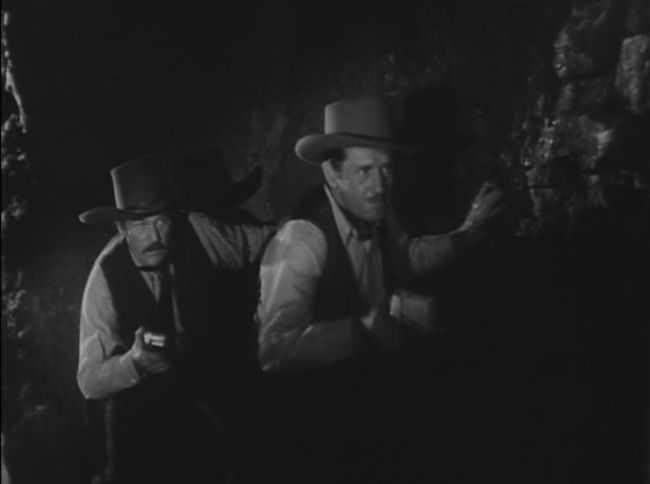 And Bart is indeed Braddock’s sidekick as they go down to the mines, just in time to realize Idaho has arrived in an attempt to rescue Steve, who is moments away from drowning in that torture tub. Idaho is stuck between Braddock and Bart on his right, Rinkton and a henchman on his left, while Steve glugs and struggles and gets the first bath he’s had in two years. 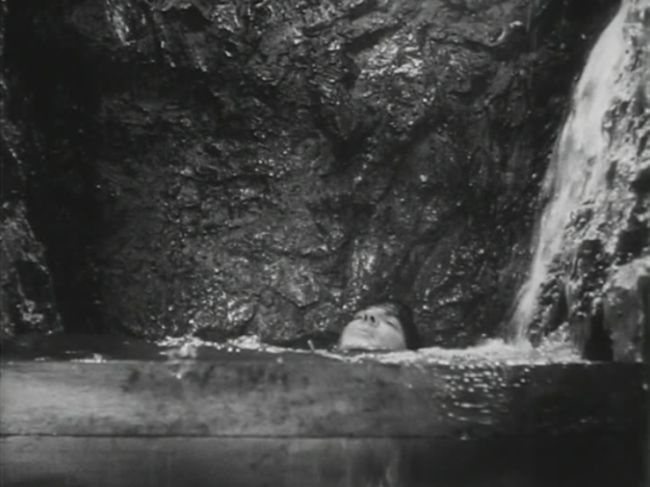 Will anyone survive? Does Bart dress exactly like Braddock on purpose, or is there only one dry goods store in town? Where did Rinkton get that kickin’ top hat? And is Rawhide still asleep? Find out next week when silly things happen to people we don’t care about!