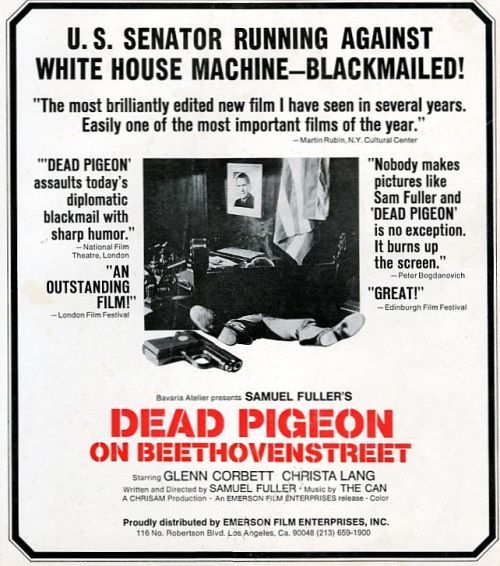 When an American private detective on the search for incriminating photos of a U.S. senator ends up dead in Bonn, his partner Sandy (Glenn Corbett) travels to Germany to find the killer. He and his German police contact Kressin (Sieghardt Rupp) close in on the suspected murderer, but Kressin is wounded and Sandy and forced to try another approach: to pose as a competing blackmailer and lure the man with the senator’s photos out of hiding. To accomplish this, he blackmails Christa (Christa Lang), the woman in the senator’s photos, into working with him to blackmail a series of foreign dignitaries. Soon, Sandy comes face to face with Mensur (Anton Diffring), the sinister blackmailer behind his partner’s death. 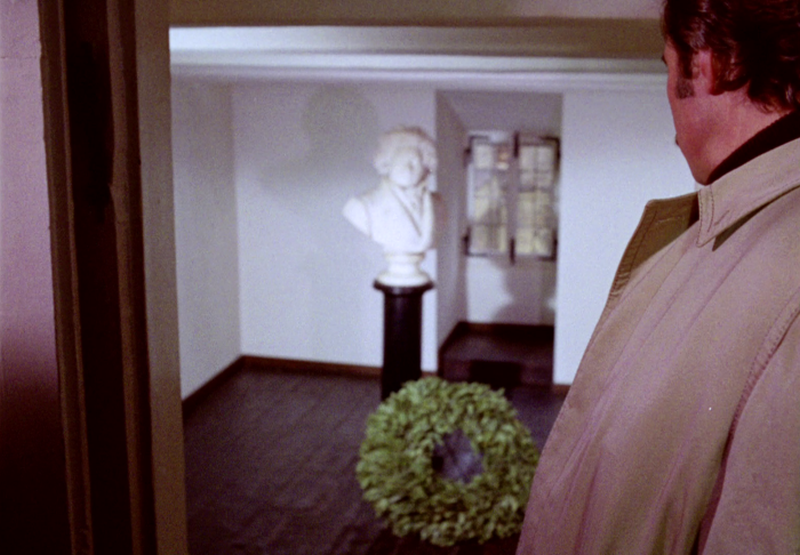 Originally released as an episode of the long-running German television show “Tatort,” Samuel Fuller’s Dead Pigeon on Beethoven Street (1973) is a surreal parody of the crime caper, with plenty of sarcastic humor and references to beloved films noir to make it enjoyable. “I wanted Dead Pigeon to be full of high jinks and hilarity,” Fuller said in an interview. “People expected me to be doing war movies or action pictures. I’d always dreamed of doing a comedy, a film of pure entertainment.”

As enjoyable as it is, whether Dead Pigeon qualifies as “pure entertainment” is entirely for the viewer to judge. Fuller was always amateurish in his work, not out of a lack of talent but as part of a sort of deconstructed style, and though this often makes his work aesthetically unappealing, one should always trust the artist in these matters. At the same time, there’s only so much goofiness one can take in a made-for-TV movie, even one directed by Sam Fuller, before you have to wonder if there is really any there there. Actors stumble on lines, glance at the camera, overemphasize the funny bits, and heads get cut off in the frame, when the film would probably play better if those heads got cut off during an action sequence. 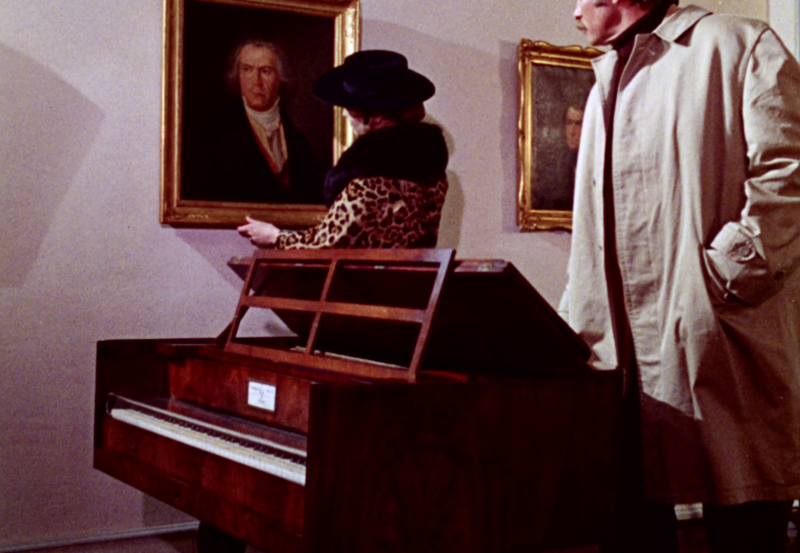 Better men than I (specifically, Jonathan Rosenbaum) have attributed this to Fuller specifically wanting to feature the piano. It makes sense, as Fuller claimed to have slept in this room under this very piano when he was stationed in Bonn during its liberation in WWII.

Ernest Larsen in 1975 described the film as “fascistic,” a term that one should remember was employed by critics with some regularity back in the 1970s. Today, I think we would probably call the film stridently anarchic rather than fascist. The intense violence, commentary on modern morals and determined refusal to give the audience the standard crime film tropes they expect is part and parcel of Fuller’s methodology. At the same time, he can be far too much of a try-hard in these areas. The (in)famous shootout in a maternity ward is ludicrous, for example, one of Fuller’s crazy scenes meant to upset what he perceived as the American status quo. He wanted to upset Middle America, but wasn’t any more sophisticated or prepared to take on massive, entrenched sociopolitical ideologies than the bourgeoisie he was so contemptuous of. Thus, his so-called shocking cinematic setpieces look like little more than pranks, something created by a precocious teen trying to irritate his parents and teachers without actually getting into any kind of tangible trouble.

Some of Fuller’s melodramatic immaturity, intentionally or not, is pretty hilarious. The diplomats are so broadly drawn they would not be out of place in Batman, the 1966 can’t-get-rid-of-a-bomb masterpiece where all the world’s leaders have been dehydrated into little color-coded piles of dust. Glenn Corbett is a big ol’ endearing meathead, though I suspect some of his dumber dialogue in the movie theater is missing (I swear I recall a line about how stupid American film stars sound when they’re dubbed, which is not in this restored version of the film). And it turns out that the completely bonkers finale goes from being merely amusing to laugh-out-loud funny, once you can see it clearly.

Fuller’s enthusiasm for making movies also turns Dead Pigeon into a really enjoyable experience. There are so many references to other films that it’s impossible to keep track of them all. There’s a little nod to The French Connection, an homage to Kiss of Death, a little Kiss Me Deadly sprinkled about, a whole sequence from Rio Bravo… 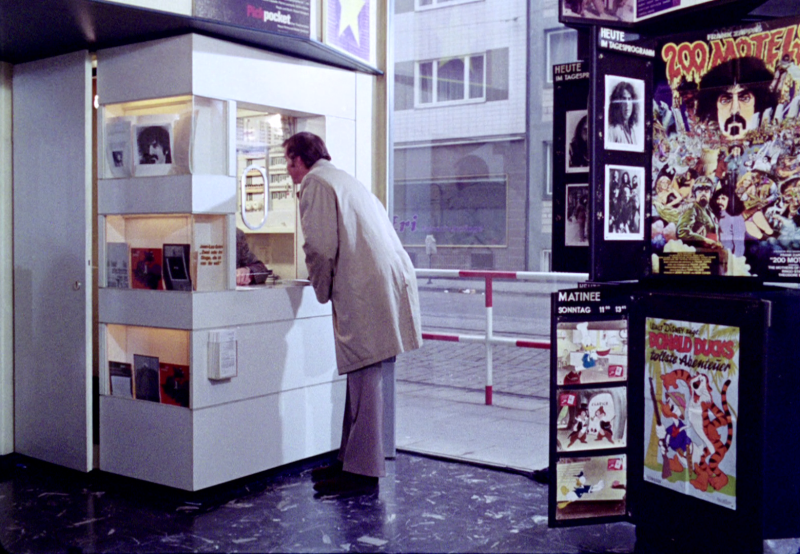 …and a barely-there cameo of a poster for Bresson’s Pickpocket.

Olive Films has recently released a newly-restored version of Dead Pigeon on Beethoven Street which adds back about 21 minutes of footage deleted for the television show, including clips during the opening credits of the crew playing with some film stock and trying not to giggle; this version of the film was re-discovered in 2011. The film has never looked better, and anyone who has suffered through a mushy bootleg will love this release. The audio is better than I expected, despite several scenes in the film where the microphones were apparently placed out in the parking lot, or perhaps inside someone’s briefcase. This release comes a short booklet containing articles by Lisa Dombrowski  and Samuel B. Prime. The film has English subtitles; there are no subtitles for the German language parts, though they’re not necessary as half the conversation is usually in English and easy to follow.