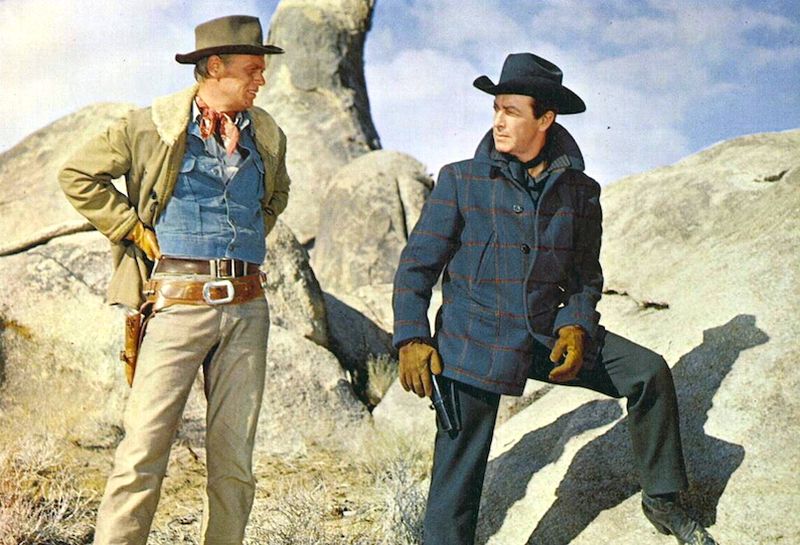 It’s 5:40 in the morning when Jake Wade (Robert Taylor) rides into town, intent on breaking Clint Hollister (Richard Widmark) out of jail.  Clint’s no pal, however, but a partner in crime from Jake’s past outlaw days, and Jake is hoping this breakout will settle an old score between them. After the duo escape and go their separate ways, Jake returns to his job as marshal in a nearby town. His quiet, comfortable life is interrupted when Clint Hollister tracks him down and forces Jake to lead him to the money they took in a bank robbery several years earlier. Hollister’s gang cheerfully drag Jake’s fiancée Peggy (Patricia Owens) along as a hostage.

In a genre so often used to examine modern sociocultural issues, everything from capitalism to the Cold War, The Law and Jake Wade (1958) stood out at the time for being a Western with very few pretensions. What’s extraordinary about Jake Wade is its adherence to so many standard Western tropes, which it then reassembles and reframes into a wholly new work. Part character study, part landscape Western and part action adventure, Jake Wade incorporates them all without inconsistency, resulting in a beautiful, entertaining film.

Though the posters for The Law and Jake Wade (1958) heavily advertised the fact that the film was in color, the palette is delightfully subdued. It’s almost monochrome at times, with washed out reds and blues blending into the gorgeous scenery. All the characters are carefully clad in hats, gloves and long sleeves, making sure they’re well-covered so their skin tone won’t contrast with the natural palette. Clint’s light denim blue shirt and sand-colored leather pants blend right into the dusty, faded land around him, while the brown jackets and hats of others are the same shade as the craggy rocks behind.  Actors’ faces really pop in close-ups, especially Richard Widmark with his blonde hair and perfect white teeth, and Taylor’s ice-blue eyes. 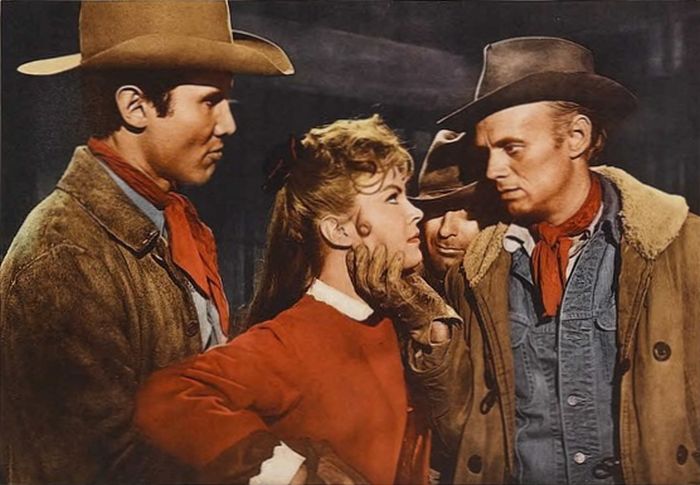 Jake Wade is a beautiful picture to look at, in part because much of the cast is not beautiful, but rather interesting and compelling. Robert Taylor is almost unrecognizable, not only from his early days in Hollywood, but from the romantic period pieces he had done a few years prior to Jake Wade. One doesn’t expect him to look like the same skinny kid dancing in Artists and Models (1937), of course, but the changes in his appearance over just a few years in the 1950s were striking; by the end of the decade, his facial features were weathered and harsh, his frame bulkier, his voice deeper. It made him perfect for Westerns, as did his acting style which, unlike his appearance, had hardly changed over the years. There are those who find Taylor a bit stiff, but in Jake Wade, his trademark reserve absolutely works. Wade was a cool criminal before, the kind of guy who could shrug off a lot of pretty rotten things. He was also the kind of guy who had a limit to the brutality of the life he had chosen, and not only left his criminal past behind but actively tried to forget it, even make up for it by becoming a lawman himself. There’s a lot behind those cranky eyes and widow’s peak, and you can tell from Taylor’s performance that most of it is going to stay right there, all bottled up inside him.

Amongst the strong cast is a stand-out performance from Richard Widmark, whose career morphed, like so many others, from film noir to Westerns. As the scheming Clint Hollister, he flashes the same toothy grin he had in Kiss of Death (1947) a little more than a decade before, though somewhat subdued. There are a lot of similarities between Hollister and Tommy Udo, with both having an unhealthy attachment to their idols, especially once those idols have fallen. But if Udo was an unhinged gangster and psychopath, Hollister was more of a businessman, intelligent and cool under fire, with a sociopathic need to be superior to all those around him. Given the type of sinister and sarcastic dialogue in Jake Wade that he was known for in all his films, Widmark delivers the lines straight, almost as though his character doesn’t realize there is any sarcasm to be had in what he says. 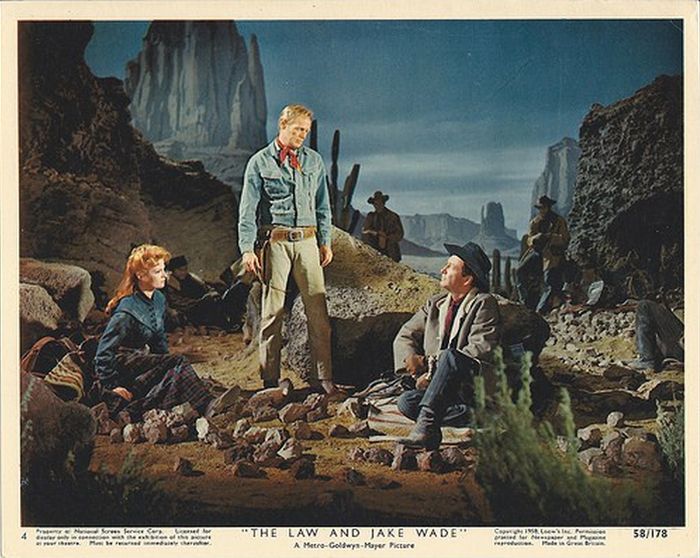 There is also the matter of the not-very-sub subtext in Jake Wade. Hollister is obsessed with Wade, and Widmark refuses to play his obsession in a maybe-he-is-maybe-he-isn’t way. Delivering lines about never having to worry about girlfriends without a hint of irony, and describing his past criminal partnership with Wade in the same way one would describe a romance, he turns what is usually subtext into straight narrative. In response, Wade lets the implications roll right off his back, though at times almost seems to be encouraging Hollister’s feelings. Add in a couple of guilty looks and a faraway stare or two to Taylor’s performance, and it’s a perfect fit with Widmark’s straightforward portrayal.

It’s no coincidence that a woman winds up in the midst of all this angst between Wade and Hollister. In the Western genre, loneliness for the hero is seen as nobility, and often when a hero walks off with his lady love or right-hand man, or heads inside to an unseen home at the end of a film, these happy endings have a far less happy implication: that the hero’s story has ended. Marriage, a home, camaraderie all spell the end of adventures, and a man who gives in to the trappings of civilization is, on some level, as giving up his freedom. But for Jake, the relationship with Peggy is part of his transformation from criminal to law-abiding citizen, complicating his motivations and the resolution of the film.

The entire third act is devoted to the finale of The Law and Jake Wade. Set in a picturesque ghost town just outside the Sierra Nevada mountain range, Jake Wade reveals itself to be a very moral movie. There are some old-fashioned ideas on what constitutes good and evil — incidents that would muddy the waters in modern films were seen as black-and-white back then — but presents these ideals in a compelling, unique way. If the second act set up Hollister’s intelligence and deft control over others, the third act highlights Wade’s resourcefulness.

Though the film is heavy on dialogue, Jake Wade is far from being a cerebral affair. There’s plenty of action and adventure and no little suspense, all with characters that you come to care about, even the supporting roles. The Law and Jake Wade is not just a gorgeous film to look at but an exciting tale, and a solid entry in the American Western genre.

Warner Archive has recently released The Law and Jake Wade on a gorgeous made-on-demand Blu-ray.

–
An earlier version of this review appeared on ClassicFlix in August, 2014.