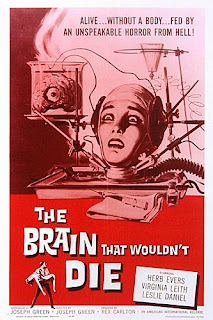 Today I realized TCM was going to show the 1962 cult (and MST3K) classic “The Brain That Wouldn’t Die” tonight, and spent most of my day rubbing my hands together in the internationally recognized oh-boy-this-is-gonna-be-great fashion.

You can imagine my glee when I realized immediately that the film had been edited. Unless I’m mistaken, there’s an icky icky shot of brain in the opening surgery scene. That was missing. There’s some saucy bits with a couple of dancers later on that was excised, and a little PG gore at the end which explains those very obvious blood streaks on the wall of the basement-bar-laboratory.

Oh wait, that wasn’t glee I was feeling. That was irritation.

Years ago I complained about recording a copy of “Rich and Famous” from TCM which had half of the profanity bleeped out. Someone on rec.arts.movies.past-films swore that TCM didn’t add the bleeps, they simply showed the wrong print of the film which had been partially bleeped for television. Sure, okay, that happens. However, the IMDb specifically lists a 70 minute “TCM print” on the “The Brain That Wouldn’t Die” Runtime entry. So is this an edited-specifically-for-TCM version? If so, why?

Some of the best parts of this movie, the bits that make Dr. Cortner go from “deeply disturbed” to “batshit insane”, were removed, and that’s a damned shame. Considering the parts removed are mild by today’s standards, I’d love to know the reason for showing an edited print.