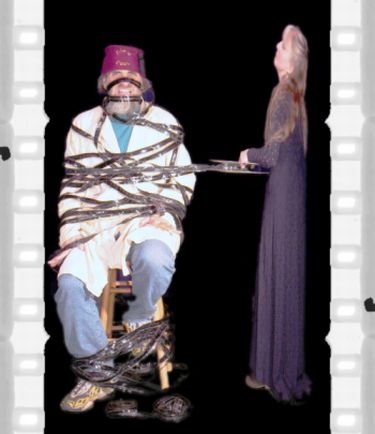 My friend Eric Grayson, Usenet pal and overall mensch — he brought his gorgeous print of Lon Chaney’s Phantom of the Opera to the 2005 Kansas Silent Film Festival, which I enjoyed immensely — has recently started his own blog, Dr. Film. Eric is also the producer of the “Dr. Film” television pilot, a show that features rare classic movies with entertaining commentary. Check out the trailer and more information on “Dr. Film” here and here.

Both the show and Eric’s subsequent blog were very exciting news for me; his first entries have been not only informative but entertaining, and the fez-wearin’ Dr. Film is an absolute panic. I’m proud to feature Eric as a guest blogger today with a terrific post on lost television and film history that most of us don’t even know is missing.

One of the delights of being a film collector is that I get to see things that aren’t “out there” on commercial video. Sadly, the reason for this is often that the films are tied up in copyright entanglements. Another reason is that the artist in question is sometimes unknown and unheralded.

The best expression of my credo on this is from the late film historian and author William K. Everson. He said, “Finding, or even rescuing, a movie is pointless if you don’t share it with an audience.” Here are some cases in which I can’t share these films with an audience. What I can do is let the audience know that these films are extant, and hopefully you can speak for yourselves about getting them released.

What’s this, you say? Edie Adams? A well-known name. I knew Edie. She was wonderful and crazy, manic and unstoppable.

Edie is remembered for two things today: 1) TV fans know that she saved the work of her husband, Ernie Kovacs, from oblivion. 2) She did a lot of commercials for Muriel Cigars.

A great deal of Edie’s work will never be seen again, because she worked on Broadway and in touring musical theater. I was never lucky enough to see her on stage, but I’m told she was great. Edie should always be held in a special place for her work in film preservation. No one, and I mean no one, worked harder at that than Edie did. She got Ernie’s work on PBS in the late 1970s. She played Mae West in a TV docudrama about Ernie, and she worked on a couple of bios in the 1990s, which is where she crossed paths with me.

Edie’s film work is interesting and eclectic, but many of the films aren’t that great. Ernie and Edie both had a tendency to be outstanding in underwhelming films. She’s at her best in movies like The Apartment and The Best Man. If you want to see her talent being wasted, she’s also in a brief role in Cheech and Chong’s Up in Smoke.

Edie was a Julliard-trained singer, and she could do any style you liked. She also was a fantastic mimic. She loved to do Yma Sumac, but I have no recordings of that.

I can show you Edie doing a great impression of Zsa Zsa Gabor on the Danny Kaye show. This deserves a release on its own:

What I can’t show you is my favorite of all her works, which is her own TV show. It was called Here’s Edie, and it was incredible. After Ernie died, Edie needed money. Ernie was in a huge amount of debt. ABC offered her a show, but she wanted only the best performers on it. The network balked at scheduling and expense.

Edie had an inspiration. She told them that they would shoot on Sunday, when most of these folks were not working. The network complained that this meant that the crew would be on overtime. She said that the musicians would all be so good that they would require less rehearsal and retakes, so that the extra expense would come out in the wash.

She was right. And she got great people ranging from Louis Armstrong to André Previn on the show. I haven’t seen all of the shows, but I’ve seen a demo of some of the highlights.

What particularly struck me were some of the illustrated music skits that Edie did. They reminded me very much of the sorts of things that Ernie had done, although they were much more serious than anything he tried. I realized that Edie had been a great influence on Ernie. She gave him a serious streak and a touch of class that I suspect he wouldn’t have had otherwise.

Shout! Factory has released a compilation of Ernie Kovacs material, which you can see here. Full disclosure: I worked on this set and contributed some film to it, although the lion’s share of credit goes to Edie’s son Josh Mills and Ben Model, who sweated over it for months. And it also goes to Edie, who was hoping to get a DVD set out up until she died.

I think Edie deserves her own Shout! DVD set. I encourage you to let them know. You can also visit Edie’s legacy on Facebook.

What? You’ve heard of this guy, too? He was the screenwriter from Psycho and the co-producer of The Outer Limits. Sadly, some of his best work is still not available, and has been almost unseen for 45 years.

There’s an alternate cut of Stefano’s Outer Limits episode The Forms of Things Unknown that was never aired. It was a pilot for a show to be called The Unknown, and it features a drastically different cut of the show. Forms of is one of the best episodes of the show, and I encourage you to check it out on DVD or BD. In the Outer Limits episode, Mr. Hobart’s time machine works, but in The Unknown, he’s only hallucinating. When the blackmailer André is revived, the two shows go in different directions. In The Unknown, he had been faking his death. In The Outer Limits, he’d actually been brought back from the dead.

The most interesting missing Stefano work is a pilot for CBS called The Haunted, which was made in 1965. Martin Landau plays an architect who specializes in saving old buildings and investigates hauntings on the side. CBS didn’t pick up the pilot. It was deemed too scary for TV. Stefano wrote and directed, with camerawork by Oscar winner Conrad Hall. In addition to Landau, Diane Baker and Judith Anderson appear.

Stefano once told me that he felt this show was the best thing he’d ever done, and he never lived to see it again. He thought it was entirely lost.

The Haunted is far from lost. There are a number of prints out there, but there is a nasty rights snag keeping this gem from getting the audience it deserves. The master material is sitting in the vaults of a large conglomerate that frankly doesn’t care about it.

I’m working on a longer article about this that may end up in Filmfax or another magazine some day. In the meantime, here are some interesting tidbits about these shows: http://wearecontrollingtransmission.blogspot.com/2011/02/lost-outer-limits.html

I don’t know what to say about this guy. He’s brilliant and has made some of the best short films I’ve ever seen. That’s not just hyperbole. Working in the late sixties through about 1990, Jittlov made a number of great pieces, from Good Grief (1969) through his most famous work, The Wizard of Speed and Time (1979). The list is incomplete, because I’m not entirely sure how many of these Jittlov made. There are at least five or six, but there may be more.

In an age when Peter Jackson can slop ill-conceived candy-colored dinosaurs across the screen, Jittlov’s economical stop-motion seems more appealing than ever. It is even more impressive to realize that Jackson’s animation came out of a computer, but Jittlov’s was done completely by hand. The short Fashionation is especially nice, set to Petula Clark’s “I Know a Place.” Objects dance in perfect sync to the music, Jittlov floats effortlessly over steps, and even the sun dances across the sky. It’s a rich visual feast, and it’s all over in three minutes.

I first encountered Jittlov’s work in the early 1980s when the Purdue Film Society repeatedly ran their print of The Wizard of Speed and Time. The audience would howl with joy when the film appeared on screen. Jittlov’s green-robed wizard zips at incredible speed through Los Angeles, and then through most of the Southwest, until he slips on a poorly placed banana peel. It is hard to describe the films, since they are unique works, unlike anything else you may have seen. That’s what makes them so great.

I’ve not met Jittlov or spoken to him, but others tell me that he’s difficult and a perfectionist. It shows. More power to him. He famously butted heads with studio brass who wouldn’t listen to him and screwed up opportunity after opportunity.

Embittered, Jittlov made a feature film about his experiences, also called The Wizard of Speed and Time (1989), and even that picture has had distribution problems. It’s currently unavailable on video. Muddy copies of some of his films can be seen on YouTube, but I hesitate to recommend them.

Jittlov’s last major work, to date, has been some effects work on Ghost (1990).

I wish I had a million dollars I could just give to Jittlov and tell him, “Go! Be brilliant. Show me what you create.” I really hope that someone, somewhere, can reach this wonderful talent before it’s too late.

He may be the ultimate unsung artist. Edie and Stefano got time in the limelight. Jittlov created gems that have been seen only by a select few. Jittlov deserves not only a DVD set, but a chance to make more films, unfettered by the idiocy he’s encountered in the past.

Conclusion (about which there is much rejoicing)

The happy moments in film collecting are discovering works like these. Like everything else, the vast majority of unknown films are pretty uninteresting. There are still those rare occasions when we can even rediscover people like Max Davidson, Charley Bowers, or Warren William.

I can’t give the films of Jittlov, Stefano, or Edie Adams an audience. I wish I could. The best I can do is let you folks know about them. Great things come from small beginnings.