I’m still watching a lot of TV, and I don’t know why! Maybe once it gets above 25F outside, I’ll be inclined to do something that involves moving off the couch occasionally. Can’t make any promises, though.

In the last TV Party post, I mentioned that I thought “The X-Files” had lost much of its cleverness by season 6. Although I enjoyed episodes “Drive” and “Dreamland”, the Christmas episode left me cold, and the Nazi-heavy “Triangle” basically Godwinned the series. But then Bruce Campbell guested. Then came “The Rain King,” which I had trepidations about because some people online listed it as one of the worst episodes ever. Worst? No, best! Despite being set in Kansas and not being 100% Victoria Jackson free, “The Rain King” was a solid episode. 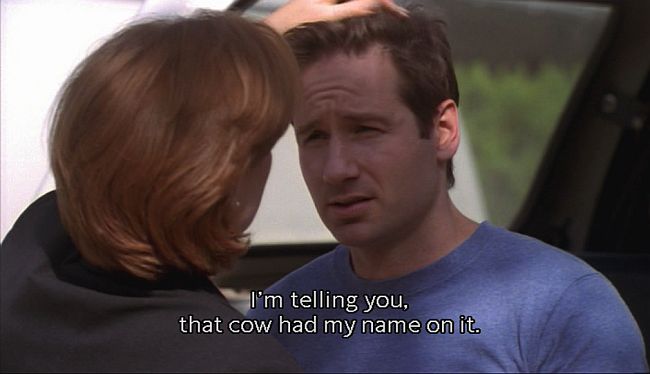 Yet this is not another “X-Files” post. The other two shows I have been watching are John Thaw vehicles, series I bought from Amazon UK for an early birthday present last year.

When I was a kid, my dad insisted we watch “Mystery!” on PBS every Thursday night. I loved the shows on “Mystery!” so much, and I have a lot of pleasant memories of watching “Rumpole of the Bailey,” “Sherlock Holmes,” “Poirot” and a dozen others. Oh, the crush I had on Sam Neill after watching “Reilly, Ace of Spies.” I remember Gene Shalit hosting the show before Vincent Price did, and I became a huge Vincent Price fan entirely because of his years as host.

Introduction by Vincent Price for the first episode of Jeremy Brett’s “Sherlock Holmes” on “Mystery!”, 1984.

One of the last series on “Mystery!” I watched with my dad — dad but not mom, as she was busy having a snit because she couldn’t choose what to watch on Thursday nights — was “Inspector Morse.” I absolutely adored the show. While the series lasted until 2000, the first seasons are the ones I associate with my dad. As you already guessed by my aside about mom’s Thursday night sulk, home life wasn’t exactly rosy by the late 1980s. Probably the last positive memories I have of my life before leaving home are watching “Inspector Morse” be a crankypants to the beleaguered Sgt. Lewis.

A few months ago I decided to rent the series in order from Netflix, but they are missing some key episodes, so I searched for the entire series on DVD. You can buy it in the US… for several hundred dollars. I’m not joking. If you have a region-free DVD player — and you really should — you can get it from Amazon UK for £36. Which is what I did, of course; honestly, you could buy a region-free DVD player and the set for half the cost of the US version of the series. 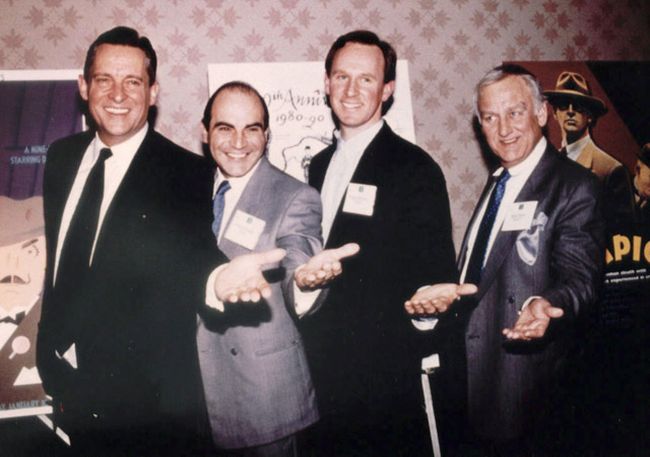 Jeremy Brett, David Suchet, Peter Davidson, and John Thaw in 1990 at a 10th anniversary celebration for “Mystery!” My favorite part of this picture is that it shows a decreasing lack of enthusiasm for hamming it up, from left to right.

“Inspector Morse” is an absolute treasure. If you like mysteries and/or crime dramas, you cannot miss this show. John Thaw is terrific, and after seeing “The Sweeney”, it seems as though it would be easy for him to simply make Morse an older version of Regan as there are similarities in both character and characterizations, but Thaw plays them as unique individuals. Morse is complicated man, educated and an elitist at times, an investigator whose cynicism at first seems logical but is often disproven by the end of the episode. He has trouble with women, with drink, and with authority.

The locations on the show are terrific, and the chemistry between Thaw and Kevin Whatley as Sergeant Lewis is wonderful. Here is a brief scene between Morse and Lewis from the 28th episode of the series, “Twilight of the Gods” (1993):

I haven’t seen much of the “Inspector Lewis” spin-off, but what I have seen is really good. I plan on renting those when I’m done with “Morse,” even though I have a little trouble with how they, erm, dealt with Lewis’ family in the series.

Unlike “Hancock’s Half Hour,” there are no full episodes of “Sweeney” online, but ITV created a lovely, subtle and tasteful trailer for their recent “Cult Classics” series with some very exciting clips from “The Sweeney:”

“Sweeney” is mature, realistic, funny, believable, and altogether charming. The Sweeney are a special branch of the London Metro Police Service called The Flying Squad. They are nicknamed The Sweeney because “Sweeney Todd” rhymes with “Flying Squad.” I admit I don’t fully understand the reasoning there. Two cultures divided by the same language and all that. Anyway, the show focuses on two detective inspectors, Jack Regan (John Thaw) and George Carter (Dennis Waterman). It features a cast of regularly recurring characters and a list of impressive guest stars, my favorite so far being Brian Blessed. Apparently Diana Dors is in an episode, and I can’t wait to get to that.

There’s not really a lot I can say about “Sweeney” except that, if you like 1970s cop shows, you’re going to like this one.