One of my recent hobbies has been finding famous people as bit players or extras in films. Richard Simmons was one of my first fascinations. About a year ago, I watched the A&E “Biography” of Simmons — a friend had insisted that Simmons’ past was sketchy at best, completely fabricated at worst, so I was curious to see what “Biography” would reveal. To my surprise, I learned that Simmons had spent some time in Italy in his early 20s, and was a bit actor in the 1969 film Fellini Satyricon.

Satyricon is a fragmented, sprawling film by famed director Federico Fellini. It leads one through a semi-fictitious early Roman world enveloped by lust, greed, bloodshed, and illicit behavior of all kinds. The camera lingers over hundreds of extras with unique faces and surprising bodies, so it’s no surprise that a young, doe-eyed, very large young man would be cast as one of these human decorations.

“Biography” showed a brief clip of the extra identified as Simmons:

Here’s a bit of a close-up: 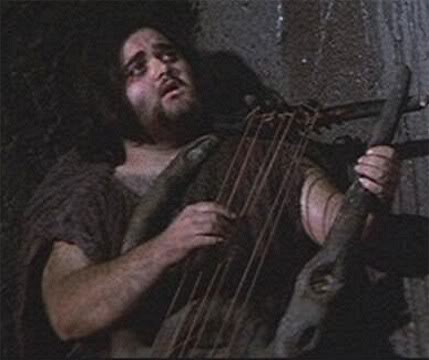 I’m sure that’s the correct clip, and at least one other blogger saw the same thing I did. At the time, I caught only a glimpse of this clip, and was amazed that it did, indeed, look like Simmons. Having rented Fellini Satyricon recently, though, and re-watched this segment, I began to have my doubts… especially since my friend was insistent that Simmons — for whatever reason — was making up much of his early years.

I’ve just watched the so-called “food orgy” scene three times, and I saw no battle-axe wielding centurions in the scene at all, let alone one that looked like a twenty-year-old Richard Simmons. Further, the “Biography” clip is not from the food scene, and as Simmons obviously cooperated with A&E for “Biography”, I would presume he knows which scene he’s in. The young man playing the lyre is about 15 minutes into the film, before the food scene. He’s one of the dozens of unique-looking extras seen in the background as Encolpio leads his slave boy into their underground room for the night.

Simmons has been telling people he was in Satyricon since at least 1981, according to this 1981 People Magazine article. The article, however, also notes that he has no photos of himself from when he was younger and larger, which is odd.

The New York Times lists Simmons as being in Satyricon, but the IMDb does not. The IMDb at one point had him as a guest star on the 1960s series “The Bold Ones: The New Doctors”, which was rerun on Hallmark in the early 2000s and is currently (as of 2008) being re-run on the Retro Channel. I’d love to get a picture of him from that episode and compare it to the Satyricon clip. (Update 2014: At some point over the years, the IMDb removed Simmons from the cast list of that “Bold Ones” episode. I presume another actor with the same name was the actual guest star.)

That said, I did sort of compare the 1969 Simmons with a more recent picture: 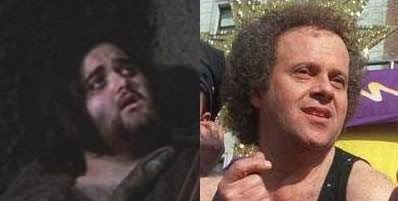 There are definite similarities. And it’s so hard to compare pictures when there’s 30 years and 150 pounds of difference between the two, not to mention the heavy eyeliner and facial hair Simmons is wearing in Satyricon.

Ultimately, the official word from Simmons is that this is his appearance in Fellini Satyricon, whether it looks like him or not.

–
(Note 03/28/2014: This post originally appeared on my first and now-deleted blog, and has been imported over here for safekeeping.)