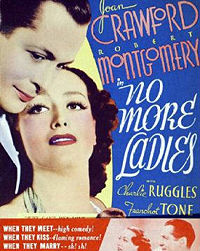 If you’re looking for a film where both fashion designer Adrian and set decorator Cedric Gibbons have gone off their collective chums, “No More Ladies” is for you. This was during Joan Crawford’s fashion plate period, where every film showcased a glamorous new look or two. Or three. Maybe four. In “No More Ladies” she has longer hair, longer eyelashes, and longer gowns with thoroughly silly details. Not content with a simple-yet-fabulous gown, Adrian enlarged many details such as belts, bows and collars to 5 times their normal size. Then he added extra sequins, straps and faux gems, then topped every ensemble off with enormous rings and a dozen sparkly bangles. With all that fabulousness, the eye never knows where to land.

The hairdresser and make-up artists managed to schmutz up the consistency in most every scene. Joan’s hair is longer but curled, and you can tell when one day’s filming ended and another’s began because her curls will differ greatly in shape and size. In the early part of the first bedroom scene she has puffier curls which go down nearly to her shoulders, but later in the same scene her curls are tighter and have drawn up several inches, making her appear to have shorter hair. At the party where Sherrie and Jim meet, Marcia goes from having normal false eyelashes when she’s talking with Edgar to those 2-foot-long monstrosities when she’s sitting at the bar. Changing hairstyles from day to day is one thing, but these mid-scene shenanigans distracted me to no end.

The sets are packed to the brim with fashionable props, and while each piece in itself is lovely, the effect of jamming dozens of lovely furnishings into a single background 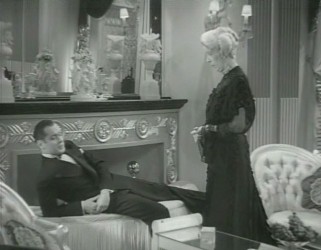 We open with Marcia (Joan Crawford) stomping around her tastefully appointed bedroom, realizing her boyfriend Sheridan “Sherrie” Warren (Robert Montgomery) is 2 hours late for their date. She angrily flings off her clothes and changes into a nightgown as her grandmother Fanny (Edna May Oliver) looks on. This is an odd scene, as it mimics the gratuitous changes of clothes from such pre-code gems as “Night Nurse”, yet manages to be completely banal. Marcia changes into a nightgown with an enormous belt and matching spiked high heels. What comfort! Later we see Marcia wearing several large diamond bracelets and a bathrobe with an enormous fur collar as she gets ready for bed.

Sherrie is a virulent playboy yet is jealous of various flirtations between Marcia and handsome society men. Sherrie and Marcia go to ritzy parties with the beautiful people, including Jim Salston (Franchot Tone) and Carrie Rumsey as played by Joan Fontaine in her first film role. Lighthearted and sophisticated parties swirl around while Marcia’s grandmother Fanny makes acerbic comments and Sherrie’s cousin Edgar (Charlie Ruggles) engages in alcoholic antics. This was back when alcoholism was still comedy gold. As we all know, that changed in the late 1970s when Lou Grant moved from a half-hour sitcom to an hour-long dramady.

Marcia and Sherrie decide to get married. Oh, they know it’s a bad idea, but they do it anyway because they’re sophisticated or something. The reasoning was specious, let’s just put it that way. As soon as they’re married, in fact on the honeymoon itself, Sherrie starts hitting on other women. Eventually Therese (Gail Patrick) arrives and Sherrie starts an affair in earnest, careless of the fact that he’s newly married or that Therese was actually Edgar’s date. Therese is a musician from “the old speakeasy days” and someone Sherrie has had a fling with before. Sherrie doesn’t bother coming home after meeting up with Therese. He uses Edgar as an excuse, unaware that a drunken Edgar has already planted himself at Marcia and Sherrie’s new home, which means Marcia knows immediately that Sherrie is lying. 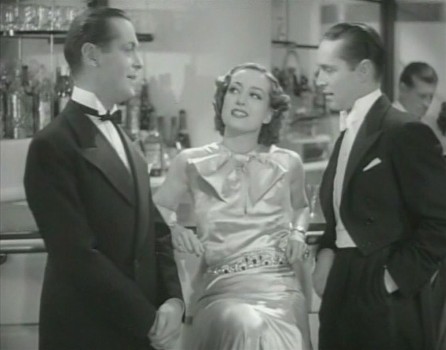 When Sherrie does return home, he makes light of the situation and bluntly says he’ll come up with better excuses the next time he’s out sleeping with women. He wants Marcia to kiss him and forget about what happened even though he’s not going to change, and instead of a kiss she gives him a nice hard slap. The slap doesn’t end the conversation; when Marcia calls the other woman a tramp, Sherrie replies that Therese is “no more a tramp than I am.” He speaks the truth, but just because he’s an honest tramp doesn’t mean he gets a pass.

Slowly Sherrie goes from simply saying he’s sorry for what he’s done to actual contrition. Sherrie’s not exactly a genius; he decides to backpedal furiously and deny that he had an affair, despite previously copping to it. He also claims he’s reformed and won’t do it again, which he pronounces to both Marcia and Edgar, neither of whom believe him. Marcia ostensibly forgives him.

Quickly it becomes clear that Marcia has plans of revenge. She arranges a dinner party where Jim Salston (Franchot Tone) is the main guest. Jim is divorced thanks to Sherrie, who unashamedly slept with Jim’s wife Diana and broke up their marriage. Not only that, Jim is clearly attracted to Marcia and Sherrie is jealous. Jim immediately begins playing mind games with Sherrie, cheerfully thanking him for causing his divorce and slyly noting that he knows Sherrie is already sleeping around.

Jim isn’t the only surprise guest. Just then the ex-wife Diana arrives with her new husband. Diana is a squeaky, annoying woman who has childish pet names for both Jim and Sherrie and is embarrassingly frank about her past marriage and affair. She is now Lady Diana Knowleton, married to Lord Knowleton (Arthur Treacher), a stiff and boring Englishman. Treacher is charming as always and it’s hard not to like him, although it’s equally difficult to not cringe at his character’s stereotype. 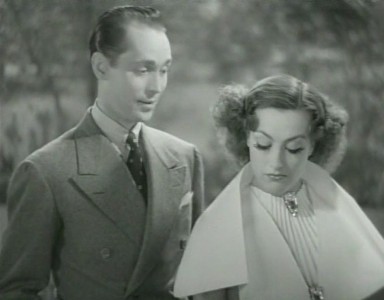 His only purpose is to be the butt of a slew of jokes about how worldly and sophisticated Americans are, while the British are stuffy and lack a sense of humor. Ironic, since Treacher is the funniest person in the film.

Marcia arrives in another ridiculous dress with a 3-foot wide collar and in 2-foot long eyelashes (which I mentioned previously in this entry, and which you can see to the left). This time I also noticed she’s wearing two brooches. What’s better than one brooch… oh, never mind.

Jim professes his love for Marcia. Sherrie arrives just as Marcia is about to respond, but everyone is momentarily distracted by the arrival of the last guest – Therese, the woman Sherrie just spent the night with. She’s a musician and has been hired as the entertainment. Her presence is guaranteed to cause entertainment, that’s for sure.

Dozens of more guests arrive for an enormous party the next day, including handsome character actor Dave O’Brien, best known for his role in “Reefer Madness”. Wild hijinks ensue. Therese begins performing her banjo and singing (she’s terrible, by the way) and Lord Knowelton takes a particular interest in her. Jim and Sherrie continue to vie for Marcia’s affections with Jim making sure Sherrie knows he finds the whole thing amusing in a 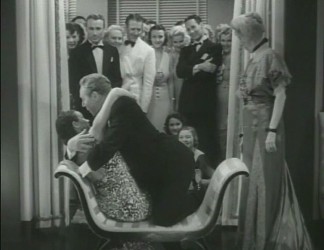 Franchot Tone didn’t have a broad range as an actor, but his smirking revenge persona in “No More Ladies” works really quite well. He has definite emotion behind his character, and while he’s certainly reveling in the schadenfreude of Sherrie’s predicament, it’s obvious he honestly cares for Marcia.

Crawford unfortunately doesn’t exude any depth as Marcia. She often makes a sharp, quick head nod to emphasize a line of dialogue, which would be fine if it wasn’t the same gesture she’d been using since the silent era. Her playful look, which consists of a false overbite and wide eyes, is similarly dated. Crawford doesn’t seem merely bored, she seems downright comatose. Montgomery isn’t stretching his acting wings, either, although he does manage to show some emotion in a couple of key scenes. These outbursts seem out of place, but for no fault of Montgomery’s — the plot is so thin that it can’t withstand any injection of genuine emotion.

Eventually Marcia decides to go for a drive with Jim, “go for a drive” being an obvious euphemism, of course. Sherrie forbids them to go. After a bit of a row they all agree to go inside and play charades. Marcia and Jim are to pose for a scene while everyone else waits behind a curtain for the reveal. While the curtain is closed, however, Marcia and Jim sneak off for a drive anyway. Sherrie is furious and humiliated. He decides to leave Marcia the next morning and get a divorce.

Marcia and Jim return before Sherrie leaves. Marcia says her great plan to live her own life failed because she loves Sherrie even though she doesn’t want to. Sherrie runs after her and starts to apologize, but breaks down in tears. They hug and reconcile. Sherrie says he trusts Marcia but still wants to know what she and Jim did the previous night. She whispers something to him, they both laugh, the end.

In a technical aspect, this was not a particularly good film. The opening montage and Grand Central Station scenes were old 1920s stock footage, the sets were static, and there was some terrible bluescreen during the faux beach scenes. The sets were often overlit, which is common enough with MGM films of the era, but was quite obvious considering the light color of the decor. 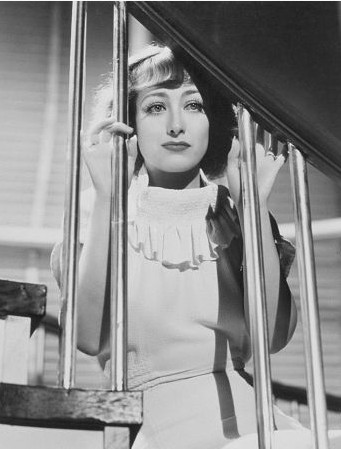 “No More Ladies” was fun enough but overall rather bland film, obviously one of the quickies made during the 50-movies-a-year period in Hollywood. It’s not that it was bad, but the glamour wasn’t glamorous enough, the dialogue wasn’t witty enough, the comedy wasn’t funny enough. It’s as though it was conceived as an upscale piece but no one cared enough to polish up the finished product.

Some of the haphazard nature of the film may be due to its moderately turbulent production. According to several online sources, director George Cukor took over for Edward Griffith when he fell ill, and Cukor and Crawford initially clashed. Further, the film was adapted from the play, but Rachel Crothers — who wrote the adaptation — was so upset with studio changes to her script that she had her credit removed from the film altogether.

For fans of early-30s glamour flicks, though, “No More Ladies” is one to add to the list.