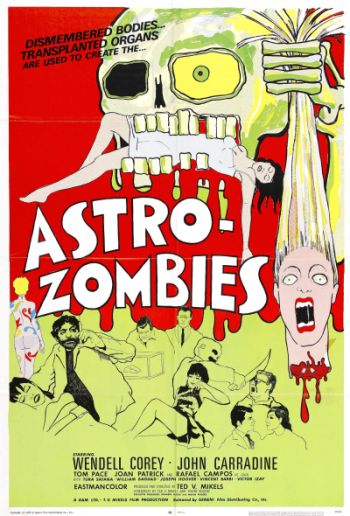 I am ashamed to say I had never heard of The Astro-Zombies (1968) until my husband stumbled across it one night. Wendell (Hic!) Corey? John Carradine? Tura Satana? I’m a fool for never having watched this movie!

Oh, this is a terrible movie, though. I felt downright depressed after watching Wendell try to get through his lines without slurring, and there’s one moment in the film where an agent at the government organization Corey works at says he’s been forced to investigate at bars so much he’s about to turn into a lush. There is a lingering reaction shot on Corey that is so very, very uncomfortable. Corey died less than six months after this film was released, of alcoholic liver disease, at the age of 54. 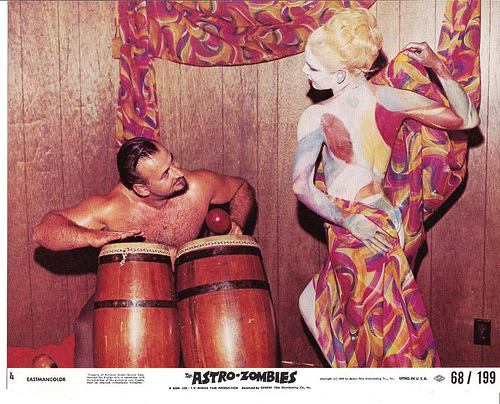 The Astro-Zombies concerns one Dr. DeMarco (John Carradine, being a complete hambone, as expected) created an “astroman” from the body of a dead criminal. It’s part of his plan to get back at “the space agency” for firing him, because he is insane. The astroman quickly becomes a liability, starts to kill innocent people (because it’s fun!) and the rest is, as they say, history.

In 1968, director Ted V. Mikels gave us both Astro-Zombies and the MST3K staple Girl in Gold Boots, and both films share some of the same cast, most notably Tom Pace. Pace is probably (and unfortunately) best known as Buz from GiGB because of the MST3K riff “I’m an icky elf!” Pace, however, is not that bad of a low budget movie actor. His reputation seems to be based entirely on the MST3K riffs and that’s a shame. Most MST3K fans (and, if interviews are to believe, some of the writers and performers on the show) loathe bad movies, which is probably why people who love Z-grade low budget flicks often don’t care for MST3K. I often feel like I’m straddling a philosophical fence by loving MST3K and bad movies, and I do get really irritated when I see someone like Pace reduced to nothing but “icky elf” online. 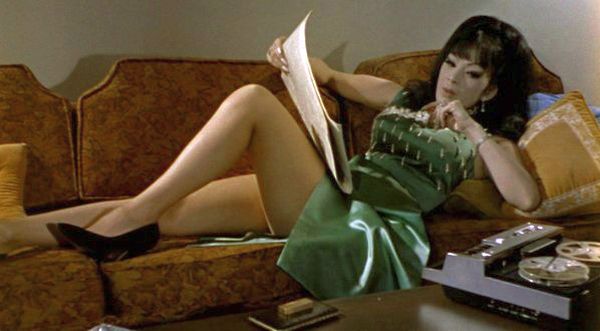 I didn’t have a good picture of Tom Pace, so I hope Tura Satana will do in his stead.

Anyway, Pace often lugs a sloshed Wendell Corey and an inexperienced Joe Hoover through scenes that would have fallen apart without him. Similarly, Joan Patrick puts in a solid performance that is much better than the film itself. As Joe Bob Briggs has exclaimed more than once, “This movie killed their careers! And they’re good people, too.” Patrick never worked in movies again, and Pace lingered in a few television roles before disappearing for good. (He may or may not be the well-known Shreveport radio personality. Perhaps someone will read this one day and either confirm or deny.)

The problem with Astro-Zombies is that, like so many indie quickies of this era, it puts the actors through actions that do not make even an ounce of sense. Screams and gunshots that are obviously easy to hear are ignored. Doors are left unlocked. Traps are set that wouldn’t work even if they had been executed by people who knew what they were doing. 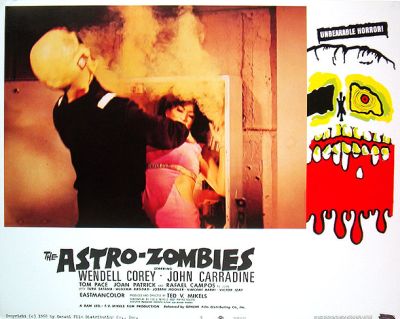 There are a few redeeming factors. One is John Carradine who, bless his heart, tries his damndest to instill some kind of logic to his mad scientist role. His sidekick Franchot (played by William Bagdad) has a few honestly funny facial expressions; I was particularly fond of Juan’s evil side-eye, too. Also, at the end when a solar-powered astro-zombie loses his recharging panel (true story), he is forced to grab a flashlight and hold it to his forehead for the rest of the film. Pure Z-grade gold.
Further Reading:

Tomb of Anubis’ review, where he refers to the lady in the opening credits as being killed “by some goofball in a bad Halloween mask wielding a weapon that looks like a trowel duct taped to a hand tiller.” He’s not wrong.

Astro-Zombies at Wrong Side of the Art