Thanks to my BBFF Ivan, I managed to catch a first season episode of “The Virginian” titled “The Accomplice,” guest starring Bette Davis. 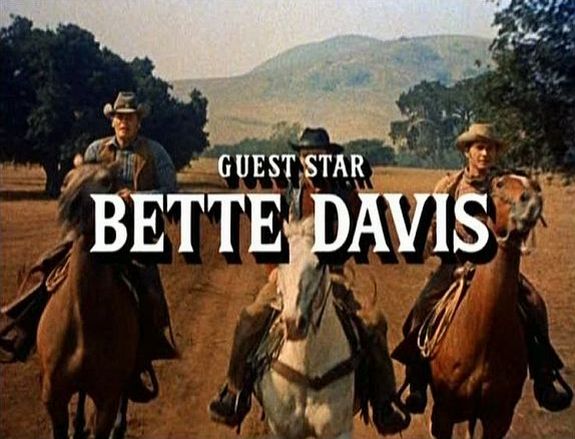 A normal person would have gotten a capture of the title screen instead of a credit… but by now you all know I am not a normal person.

Bette plays Celia Miller, spinster bank teller, whose bank had been robbed a year earlier by masked bandits. The manager was killed during the hold up, and one of the robbers was recently apprehended. The robber named Trampas (series regular Doug McClure) as one of his partners in crime. Since Trampas is a regular on the show, it’s obvious he didn’t commit the robbery, so the show focuses on whether he will be unfairly convicted or not.

Trampas is arrested and taken back to the town where the robbery occurred, and The Virginian goes with him. They are both astonished to find two bank employees, Celia (Bette) and Mr. Darby (character legend Woodrow Parfey), confirm Trampas was one of the robbers. It soon becomes clear that Mr. Darby’s account is unreliable because of his poor eyesight, but no one can figure out why Celia, a well-known resident with an impeccable reputation, insists that Trampas was involved. When the arrested robber’s real accomplice arrives in town pretending to be a newspaperman, all is clear: Celia wants $10,000 from the accomplice for her cooperation in identifying the wrong man, allowing the accomplice to go free.

Bette gives a perfectly cromulent performance as a lifelong spinster who is making a last desperate attempt at living the high life after being cheated of her youth. But it’s not an inspired performance, and she looks positively irked throughout much of the proceedings. This was an odd time in her career, a period where she was getting excellent, but dwindling, film roles, while she also did mediocre guest shots on television.

So. Let’s talk about Bette’s lipstick. 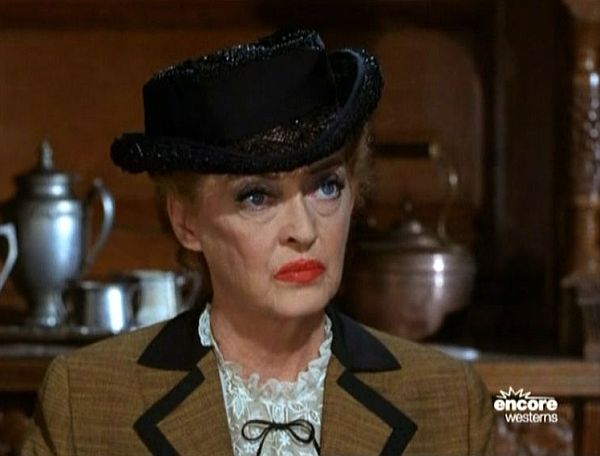 What the heck? Her lipstick is crooked on the left (her right) upper lip in every scene, and it’s always applied well beyond her lip line. The latter I could understand a bit, but the crooked smear? I can’t even imagine what lead up to this. So distracting. 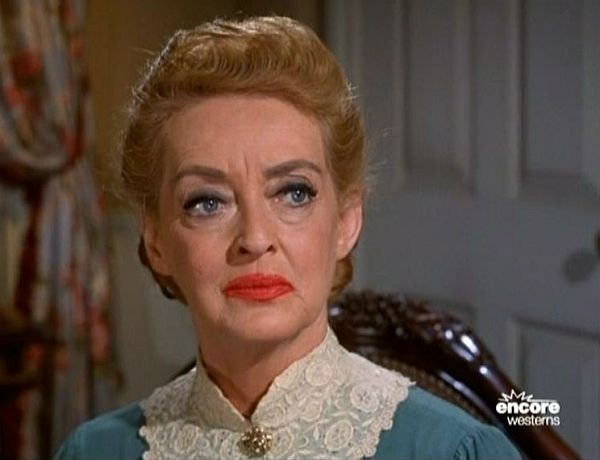 That lipstick!  Why do I care?  I’m obsessed with understanding that which cannot be understood.

***
Spoilers for The Nanny: 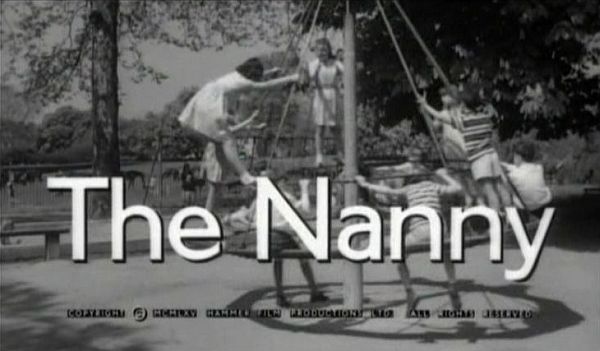 Three years after her guest stint on “The Virginian,” Bette appeared in the Hammer thriller The Nanny. A film that has developed quite a cult following over the years, it wasn’t released on DVD until 2008, and is not often shown on television. The film explores a now-common theme of children becoming victims of those they should trust the most. It’s an excellent movie but with a singular flaw that the mars an otherwise spotless thriller: Joey, the so-called victim. His character tries to be part sociopath, part innocent victim, part scampy kid, part rebellious pre-teen, and part holy terror. Joey really needed to be narrowed down a bit to give the plot more focus.

Bette Davis is Nanny, the haggard 50-something caretaker to Joey. Nanny has spent her whole life caring for others, as she was nanny to his mother Virgie and her sister Pen many years ago. The 10-year-old Joey is off in a special school for disturbed children, we eventually learn, because of an incident two years prior where his young sister drowned in the bathtub. Today, he is being sent home because the school can do nothing with him. He terrorizes his teachers with pranks like faking his own hanging, and he shows no remorse. His distant father could care less about Joey as long as he’s behaving himself, which he never is, so father yells and threatens all the time; when nothing improves, he just leaves. Joey’s mentally unstable mother can’t really care for him properly. He’s left under the care of Nanny, whom he hates, but he can’t explain why except to blurt out overly dramatic claims about her being a murderer. 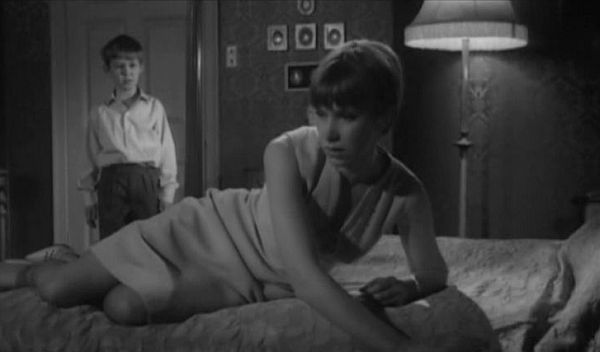 That’s the crux of the flaw I mentioned earlier. This is a very bright child, yet his character flips inexplicably from precocious schemer to whining toddler, and for no other reason than it best moves the plot forward. The only way the film could perpetuate the idea that no one believed Joey was to make him a rotten little sociopath in the making, as well as have him unable to express himself in a way that was believable at key moments. The problem is that he is often coherent and logical, completely at odds with the moments where he is almost nonsensical.  I suppose it’s possible that these moments were accidents of writing or directing or acting and that he was never supposed to be believable; this theory is bolstered by a scene toward the end of the film where the boy relates an event in a way which makes it clear that no one should have trusted his word.

Nanny spends much of her time caring for emotionally unstable Virgie, and she also works hard to keep the peace between Virgie and her cold, unsympathetic husband. She’s patient with Joey despite his violent outbursts, pouts, and cruelty to his own mother. Nanny runs the household and even runs a little interference between Virgie and her wild sister Pen, played by the always fabulous Jill Bennett. Nanny is invaluable, competent, and in control. She is also an older woman now, never married, no life of her own, one of the servant class who has sacrificed their own lives for the comfort and care of others.

We learn through flashbacks that she had been summoned away to see her own sick daughter on the day Joey’s little sister drowned. Nanny had to sneak away while the kids were left playing alone, and the little girl fell into the bathtub, knocked out cold. Nanny’s adult daughter was living in squalor and had, moments before Nanny arrived that day, died of complications from a botched abortion. The man who was with the daughter when she died berates Nanny for not being there for her own daughter, and we see in Nanny’s face the fight between her role as servant to take care of the daughters of others versus trying to take care of her own illegitimate child. When Nanny returns, she fills the tub without seeing the little girl laying unconscious within. The girl is dead by the time she is discovered and Nanny cracks, imagining the little girl is still alive.

Joey’s flashback for the same day tells us that he had been deliberately cruel to his little sister, inadvertently resulting in her playing near the tub. When he hears a thump from the bathroom, he either doesn’t realize what’s going on or he can’t be arsed to go check on her. Now, an 8-year-old shouldn’t be responsible for the welfare of his younger sister, but we don’t see this incident until we’ve already endured over an hour of Joey being the most irritating child on earth. Joey shows no emotion about his dead sister. It’s just an immediate “Nanny is crazy, therefore I’m a victim” reaction which apparently propels the entirety of his behavior from that moment on. 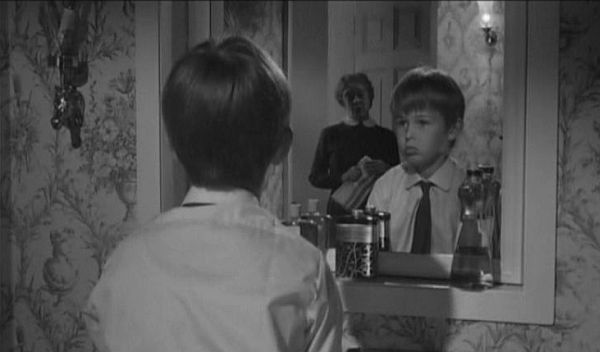 At any rate, he’s not a reliable witness to the situation. This goes some way to mitigating his inability to tell people what happened, but frankly, even if he had been a reliable witness, the lead-up to the incident deliberately paints Joey as someone who was a hateful little shit before his sister was killed. The flashback plays as yet another example of him being self-absorbed. I suspect the film meant for the audience to think that he was partly responsible for the situation anyway.

This would be fine, except for the ending: When Nanny is apprehended, Joey runs to his mom and tells her now he’s going to help her and fix everything and take care of her. It’s played like a mother and son reunited, when the dialogue sounds all the world like it should be foreboding. If it had been filmed with sinister music, dark angles, and the revelation that Joey is glad that Nanny is gone because now he can run free as a sociopathic little brat, that would have made sense. My ending: “Oh, I’ll take care of you now,” he says while hugging his mom. One angle shows his mother happy, the reverse angle showing him with a smug-yet-evil Martin Stephens-esque grin. FIN. There, I fixed your picture for ya. 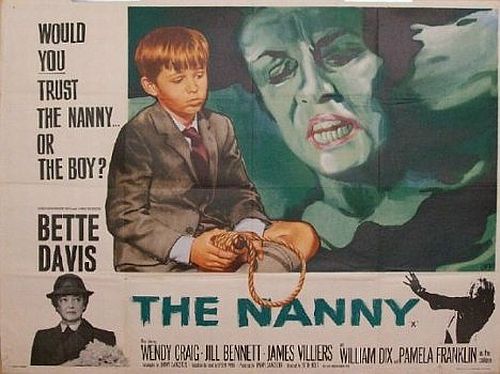 In all seriousness, I do not think this is a bad film in the least. The performances by Bette, Jill Bennett, and Wendy Craig are nearly perfect. The fluidity between present day and flashback is remarkable. Some of the cinematography is uninspired and occasionally repeated, but it’s still compelling. The endings of thrillers are hard, if the number of weak endings I’ve seen in my lifetime is any indication, so I understand and I forgive, because I am benevolent. (Stop laughing.) The Nanny finale was unrewarding and unbelievable, but at least it wasn’t The Bad Seed or Leviathan.

You Wanna Read More:
“The Nanny” at Son of Celluloid
The Nanny at Dawn’s Chick Flicks
Cinebeats Review of “The Nanny”