Today’s brilliant guest post is another from my friend and yours, Ivan of Thrilling Days of Yesteryear who, like Scott just last week, has beaten me to blogging about one of the essentials of WTF cinema: Madam Satan. Interestingly, this post documents the exact moment Ivan realized that I have really horrible taste in movies.

From the She Blogged by Night Film Archives: “Who wants to go to hell with Madam Satan?” 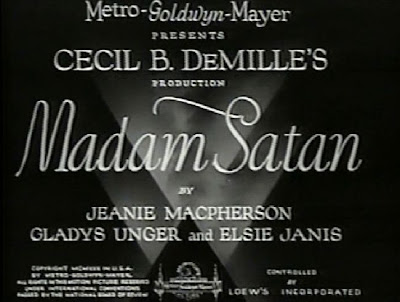 Ivan G. Shreve, Jr. again…and as promised (while our gracious hostess spends a lovely vacation day gathering sea shells by the shore), I finally managed to complete a viewing of Madam Satan–the 1930 WTF musical romance directed by Mr. Sin-and-Salvation himself, Cecil B. DeMille. DeMille, who had made his fortune with Biblical-themed epics like The Ten Commandments (1923) and The King of Kings (1927) at Paramount Studios, went slumming at the Tiffany’s of the movie bidness, M-G-M, for a trio of pictures—this one, the earlier Dynamite (1929) and The Squaw Man in 1931. In Satan, DeMille makes a triumphant return to the sort of bedroom farces he helmed early in his career with star Gloria Swanson (Cece wanted Swanson for this movie, but her paramour at the time, Joe Kennedy, waved her off the project)…well, for the first fifty minutes, anyway. Then he stages a shindig on a zeppelin complete with hedonism, deco sets (courtesy of Cedric Gibbons) and eye-popping costumes (Adrian) that will literarily leave you agog…and it’s this portion of the narrative (before it reverts back to the boring marital stuff) that makes Satan the curio it is today. (The zeppelin shenanigans were originally filmed in Technicolor but sadly do not survive in any known form.) Oddly enough, Satan was one of the filmmaker’s few box-office disappointments. 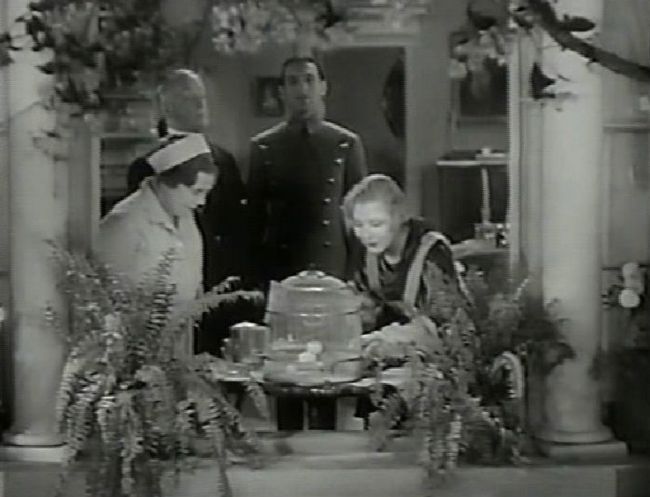 As the picture opens, we find wealthy socialite Angela Brooks (Kay Johnson) giving a canary a bath (it’s been suggested that DeMille is exercising that bathtub fetish of his, particularly since later in the film there’s a sequence set in the Central Park reservoir) and if you can explain to me why someone of Brooks’ station has to perform this task when she has a coterie of servants at her beck and call standing around watching this, I’d love to hear it. In fact, she scolds one of them (the chauffeur) when she discovers a woman’s powder puff in her hubby’s boudoir and when the driver transparently covers up for Mr. B by explaining that he (the chauffeur) uses it to “polish the nickel” (is that what they called it back then?) she says to him: “I suggest you buy yourself a chamois.” (I don’t know why I found that so funny, but I did.)

This brief exchange is the first in a series of hints that Mr. Brooks—who goes by “Bob,” and is played by veteran character thesp Reginald Denny—is enthusiastically catting around despite his being manacled to Mrs. Brooks…and while it’s certainly understandable why he carries on so (Mrs. B is the kind of woman who’s just a few years away from being annoyed that Groucho, Chico and Harpo have crashed her manse’s society party and are mercilessly mocking her and her upper crust pals) what I don’t understand is why she doesn’t kick the guy to the curb and be done with him. Anyway, Bob and his pal Jimmy Wade (Roland Young, one of the movie’s highlights) drunkenly stumble into Casa del Brooks, much to Angela’s displeasure because the maid has tipped her off to this little newspaper blurb: 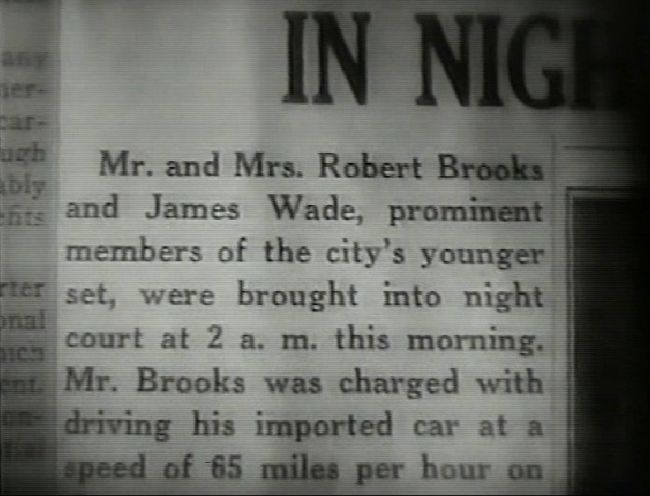 I’ve always believed that the stigma of coming in at that time of the morning completely spiffed is lessened if you’re wearing top hat and tails—items of clothing that Bob and Jimmy continue to wear (though they’re in the stages of peeling them off) as they take a shower and sing a few drunken choruses of “Ain’t Gonna Rain No More.” 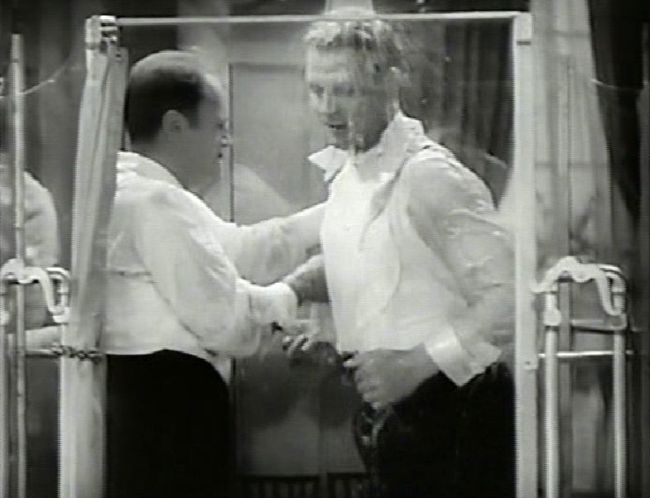 After shooting her hub a few disapproving looks, Angela wanders off to prepare Bob’s sleeping quarters and the smug Bob lords it over his pal Jimmy that “she doesn’t even suspect.” Bob is apparently an errant husband because of his passive-aggressive spouse—he says to Jimmy: “I wish she’d throw something at me.” “So do I,” cracks Jimmy, and the audience murmurs in agreement. 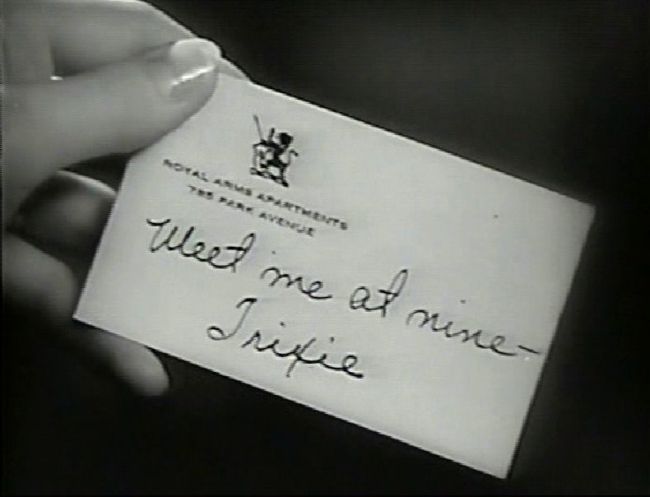 Unless this is a note from that nice Mrs. Norton upstairs, this does not bode well for Bob. Actually, he’s already in the hot seat—Angela confronts him with the article in the paper, and the two men attempt to wallpaper over their faux pas by fibbing that the “Mrs. Brooks” mentioned in the item is, in fact, “Jimmy’s wife.” Angela amusedly allows Bob and Jimmy to dig a deeper and deeper hole for themselves but she’s clearly not buying the bullshit. 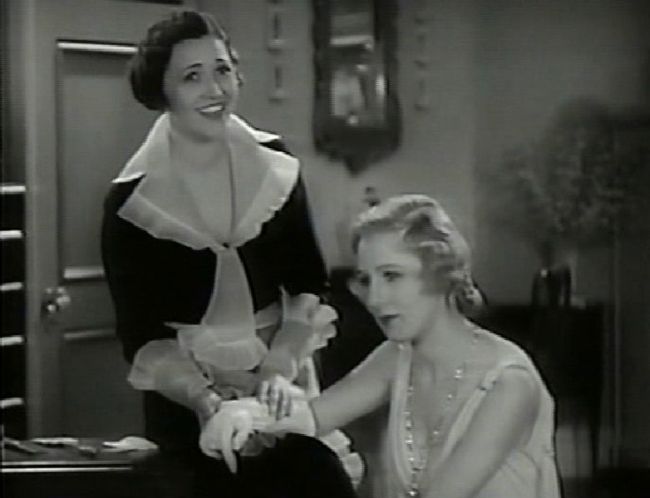 The highlight of all these road apples is when Bob justifies his adultery by telling his friend: “I’m a romantic guy…I crave warmth and affection, and all I get is frozen justice.” (Now in five fruit flavors, kids!)

Because Bob spent the entire day sleeping one off he’s missed the concert he was supposed to attend with Angela…who, when she expresses dismay to her maid Martha (Elsa Peterson) that Bob is such a hound, gets a life lesson sung to her by same. (I swear I’m not making this up.) Mr. Romance and his ice-covered spouse eventually have a heated discussion about his proclivities (Angela rightfully diagnoses that her hub is affected with Peter Pan syndrome but again, stubbornly wants to stay with him) to the point where Angela packs a bag and threatens to leave. Bob makes the magnanimous gesture of leaving first… 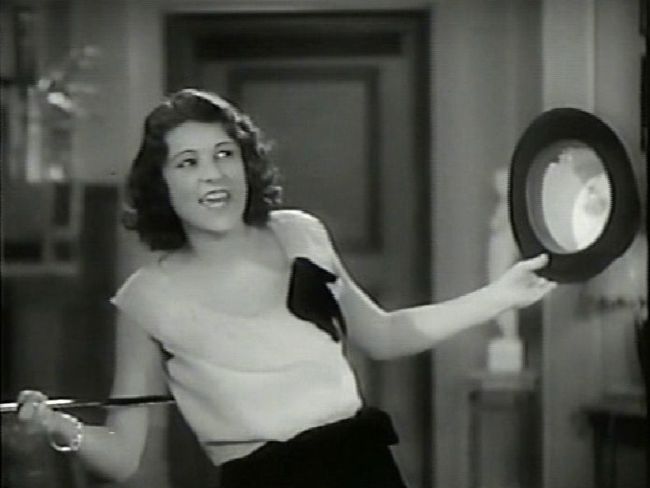 …to this bit o’crumpet. For those of you who aren’t as far ahead in the narrative as you should be, this is “Trixie”…and I’m still trying to figure out why DeMille and scenarists Jeanie Macpherson, Elsie Janis and Gladys Unger thought it entirely plausible that Bob wouldn’t have dropped the patrician Angela like a bad habit when he’s got Lillian Roth waiting for him. The singer-actress, who’s probably better known for her tumultuous personal life (sketched out in the 1955 film I’ll Cry Tomorrow, starring Susan Hayward as Lil) than her early onscreen performances in such films as The Love Parade (1929) and Animal Crackers (1930), is the other highlight of Satan–she also gets the film’s best musical number, the hotsy-totsy “Low Down.” An unapologetic man-eating bimbo, Trixie gets a visit from Jimmy who warns her that the wife of her sweetie is… 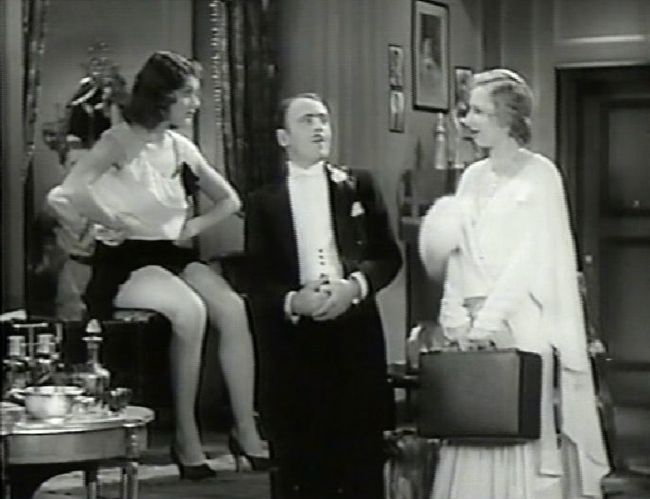 …going to walk through the door. (Quel inconvenience!) Roth and Young have to pretend that they’re husband and wife in order to keep Denny’s infidelity a secret from Johnson (as if she hasn’t already doped it out by now) and fail miserably at the masquerade…though they do manage to inspire a chuckle or two. This nonsense continues for about another twenty minutes of the picture, and then Denny’s Bob arrives at his paramour’s crib–where he doesn’t learn that his wife is lying in wait for him but instead thinks the woman hiding in Roland Young’s bed is Rollie’s current squeeze (though Jimmy does tell Bob she’s a married woman…and because DeMille establishes that Bob is a textbook cretin he doesn’t suspect a thing). Alone in the apartment with her competition, Johnson does deliver a line of dialogue in Roth’s direction that I plan the use the next time such an occasion arises: “There’s nothing secret about you…you’re common and cheap!” (Snap!) 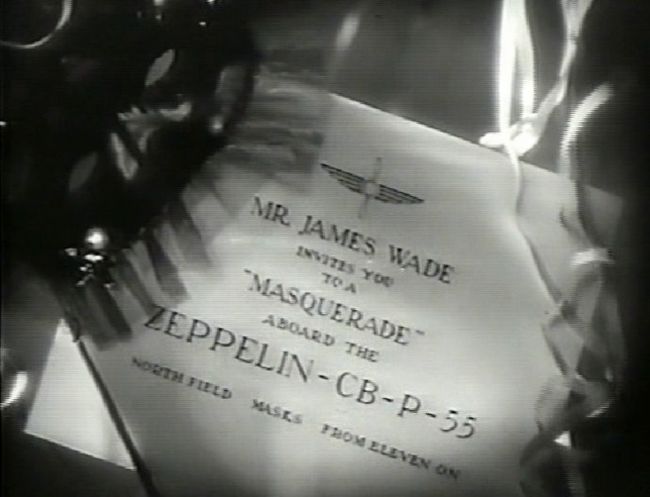 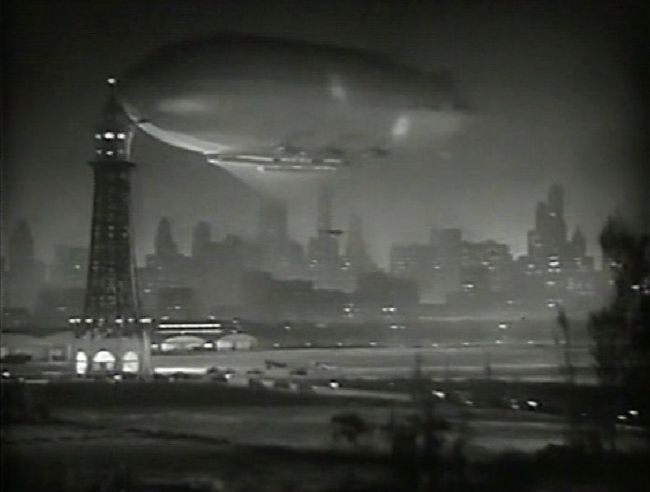 After a musical number or two, we see a parade of amazing costumes–Trixie and Bob show off their finery and though it just might be me that getup Trix has on in this photo looks like it could put an eye out if she’s not careful. She brags to Bob that no one will know her in her outfit but when she’s greeted by another partygoer by name and she asks how he knew it was her he cracks: “I knew you by your appendix scar.” (Apparently “little Trixie” is the original good-time-had-by-all.) 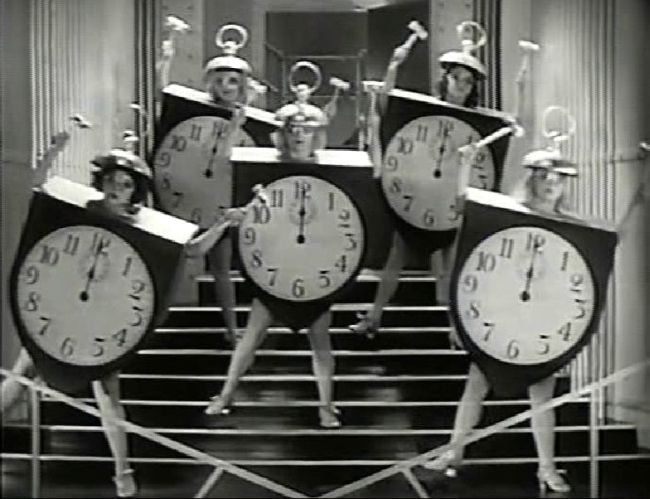 Uh…yeah. Just an indication of things to come, folks. I must apologize for the less-than-stellar quality of the screen caps, by the way–Madam Satan has been made available for purchase as a MOD (made on demand) DVD through the Warner Archive but neither Stacia nor I possess the wherewithal to purchase a copy. (Promotional DVDs, of course, are always welcome—contact us for details on where to ship them.) I’ll save most of the costumed highlights for those who’ve yet to see the picture but I did want to point out one particular item of interest… 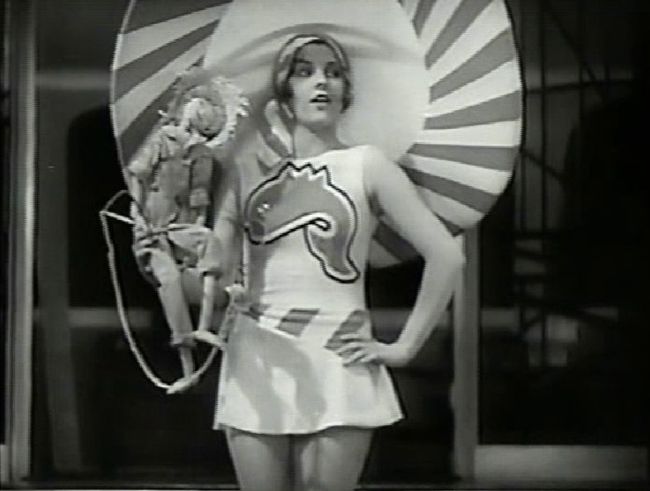 This lovely gal billed as “Fish Girl” is stage actress Martha Sleeper—a longtime Thrilling Days of Yesteryear fave because she appeared in many of the silent comedies cranked out by the Hal Roach Studios in the 1920s, working alongside the likes of Charley Chase (Long Fliv the King, Crazy Like a Fox), Max Davidson (Pass the Gravy) and Our Gang (Thundering Fleas). (She also appears as “Ethel” in the Laurel & Hardy talkie two-reeler The Chimp.) 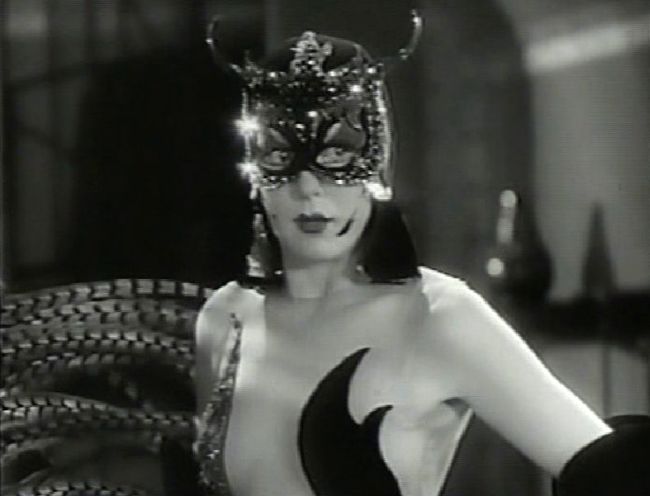 And of course, we can’t leave out the titular vamp of this celluloid opus, Madam Satan…who sports garb that allows one’s imagination to run through a field of clover and a Gallic twang that immediately made me think of John Cleese’s classic Holy Grail exclamation: “Of course we are French! Why do you think we have these outrageous accents?” Madam does a little musical number announcing her arrival, and then competes with a pouty Trixie for the title of “Belle of the Ball” (they auction off the women, in case you were wondering) and wins handily thanks to the horny men who have fallen under Mrs. Satan’s sway. 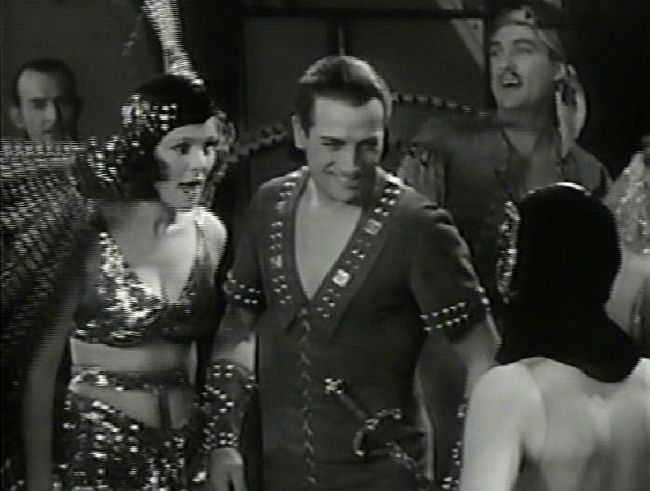 Angela/Satan and Bob sing, dance and flirt shamelessly with one another for most of the remaining moments in the film–and Bob is such an annoying prat that you keep wishing someone would push him off the zeppelin. Fortunately for the audience, the scenarists of this little clambake allow the aircraft to be threatened by a thunderstorm and the passengers are forced to scramble for parachutes; Bob is made a last-minute hero by giving his chute to Madam Satan (who donated hers to the temptress Trixie, with the promise that she’ll stay away from Mr. Satan) and he emerges with only a few scrapes and bruises after a dunking in the Central Park reservoir. There is also a coda in which Mr. and Mrs. Satan patch things up, if you’re still awake by then. 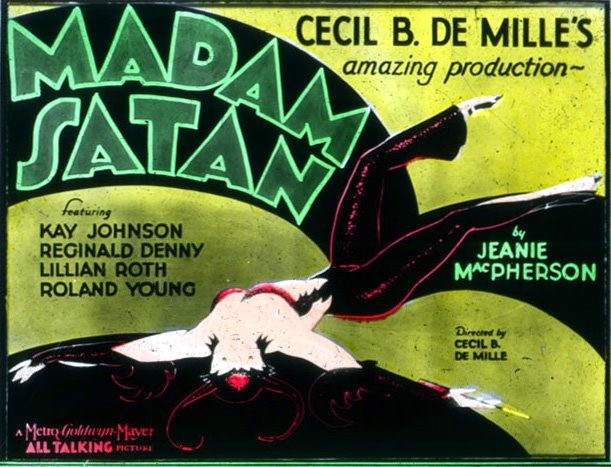 I had read of Madam Satan’s reputation in film books and as such, it became a film I desperately wanted to see—so thanks to the SBBN lending library, I was able to do so without having to pony up the prohibitive tariff being asked by the aforementioned Warner Archive. I have to tell you—had I gone the Archive route, I would have been gravely disappointed…I’m not suggesting you not watch Madam Satan if you haven’t seen it; I’m only explaining that I personally don’t think it lives up to its hype. Jonas Nordin of All Talking! All Singing! All Dancing! describes Satan as possessing “great moments, some good dialogue and funny situations but they are just raisins in a too heavy cake” while my pal Hal Erickson edges a little closer to my personal opinion by describing DeMille’s “farrago” as “an exercise in incoherence.” Still, for lovers of camp and general WTF 1930s nuttiness Madam Satan can’t be beat.  And really—any film that features a bit character named “Spider Girl” is certainly worth a look-see…though whether or not she possesses the same powers as the radioactive arachnid-bit Peter Parker goes unexplained.