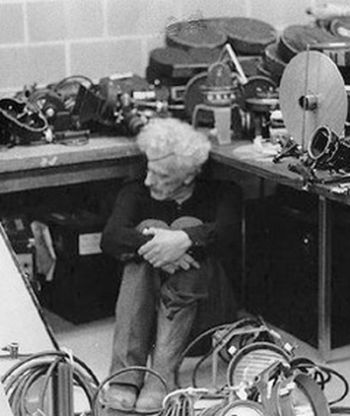 “That’s the way film should be. An artist should not moralize. A person who has the audacity to make a film in the first place should never consciously put his own neuroses on the screen.”

Wet Dreams is a 1974 compilation of short films about sex, with segments directed by Max Fischer, Lasse Braun, and others, including a somewhat surprising entry by American director Nicholas Ray. Though the origins of this film and its production are apparently lost to time,  the internet attributes the film’s creation to an unnamed wealthy Dutch man, often described as eccentric. Elsewhere, Mark Betz in Beyond the Subtitle reveals that the project was spearheaded by International Film Festival Rotterdam, while John David Slocum claims Wet Dreams director Max Fischer produced the film entirely by himself; this latter theory was repeated in 2005 by Vanity Fair. Fischer’s heavy involvement is hardly in question, and the rich, nameless Dutch eccentric seems to have been a real person, but neither appear to have acted on behalf of International Film Festival Rotterdam, nor is it verified that the film showed at the festival at all. Wet Dreams, for all its artistic claims, seems to have been just another 1970s porno, albeit with a somewhat unusual pedigree.  Fischer and another Wet Dreams director, Dusan Makavejev, would make the cult-sex film Sweet Movie that same year. Lasse Braun, director of other 1970s adult films such as Sex Maniacs and Kinkorama, also contributes to Wet Dreams, as do many others. 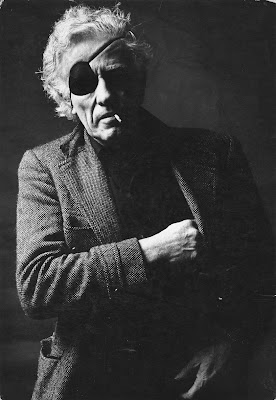 In 1971, Nicholas Ray began a two-year stint teaching at Harpur College at SUNY Binghamton. He and his students collaborated to make We Can’t Go Home Again, a film created while Ray and his students lived for two years in a commune, filming mostly at night. Derek Malcolm of The Guardian describes the situation as Ray being “surrounded by obsequious young acolytes,” and interviews in the 1975 documentary I’m a Stranger Here Myself do much to confirm that.

After two years of constant re-shoots and re-editing, Nicholas Ray traveled to France in May of 1973 to show the rough cut out of competition at Cannes. Jonathan Rosenbaum describes the premier as less than optimal, a situation that pitted an aggressively unfinished film against a slew of exhausted film critics and attendees. Patrick McGilligan notes in Nicholas Ray: The Glorious Failure of an American Director that some say the film — Ray’s first in a decade — received a standing ovation, but biographer Bernard Eisenschitz says the film “went unnoticed” by everyone.

After the showing and subsequent interviews, Ray quickly ran through his funds, forcing him to crash at the homes of a series of acquaintances in Paris. He ran up enormous bills others ended up footing and was in dire need of cash. A few years prior, Ray had come to the defense of Henri Langlois, and to return the favor, Langlois introduced Ray to a Dutch film producer in late 1973 in hopes of scoring Ray some paying work. The producer was putting together a cinematic project designed to express the erotic dreams of artists on film. Ray agreed to contribute a segment, one he would write, direct, and star in. On his way back to the United States from France, he stopped for a few days in Amsterdam and, during his brief stay, filmed the 10-minute segment entitled “The Janitor.” 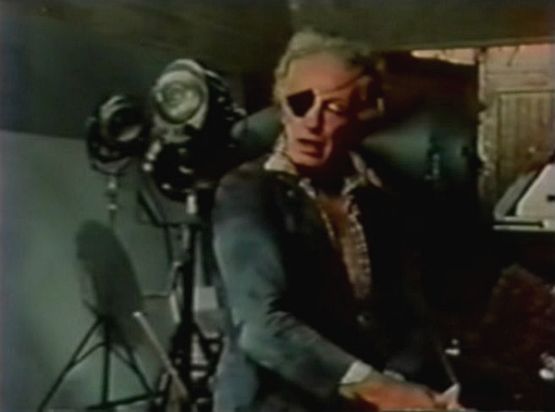 The janitor of the film sweeps what appears to be a film studio while a black-capped preacher and his young teen daughter walk through to their upstairs loft. She propositions him but he declines, stating that the sermon is about to begin and she needs to take collection. It is at this point that we realize the timelines for the preacher and the janitor have split, the preacher giving his sermon in the past and the janitor sweeping up after him in the cinematic present. 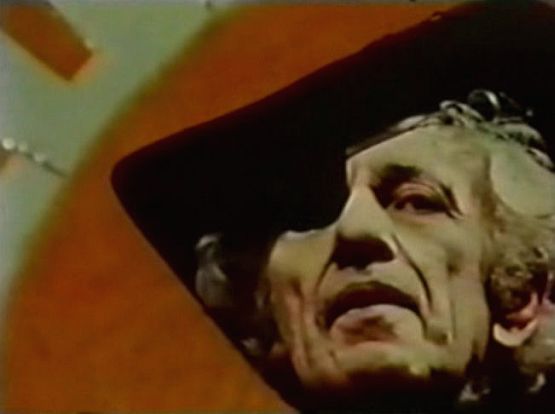 Dubbed in a deep, resonant French voice, probably by Alpha France for their Paris release, Ray preaches to the assembled about Moses, the Ten Commandments, and the theft of a ruby ring he bought from collection money gathered at previous sermons. Almost immediately the assembled begin to praise his spiritual wisdom, and the congregation is moved to sexual expression. He tells them to stop, he has more to say and he wants them to listen, when a pretty and bookish follower kneels before him, asking if she may service him. Flustered, the priest agrees, and she is followed by a second female follower, then a third — his young teen daughter. 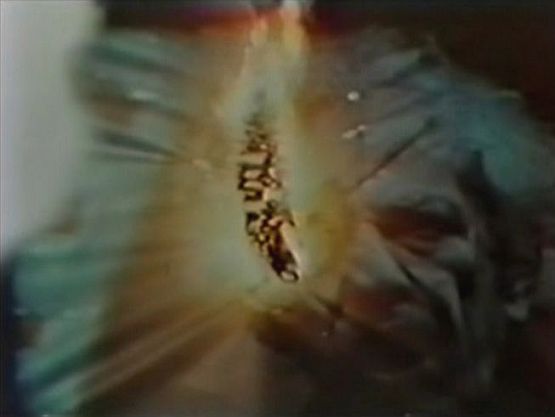 Ray’s depiction of himself as misguided, flamboyant proselytizer to adoring subjects mimics his teacher-student and mentor-protege relationship. Ray seems to have felt, rightly or not, that the adoration he so much enjoyed was indulgent wankery. He also understood that he was at once two people, a worshiped and indulged priest and a lonely, ignored working stiff. The janitor literally and metaphorically cleans up after himself, picking up the pieces of the priest’s life left amongst the detritus. When he destroys the priest on the screen, is it with vengeance for the wrongs that have been committed, or with the desire to take over as the priest himself?

The incest angle is ignored by most critics and reviewers, who mention it but deliberately avoid analysis. In such a biographical vignette, one that mentions Ray’s real life psychologist by name, comparison of course drifts to Ray’s second wife Gloria Grahame caught sleeping with Ray’s 13-year-old son Tony, her stepson. According to Vanity Fair‘s article on the making of Rebel Without a Cause, Tony and Gloria shared a mutual hatred of Nicholas that bonded them. 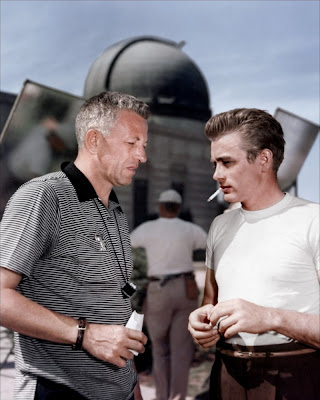 Interestingly, the same article says that Nick was sleeping with a 16-year-old Natalie Wood when he cast her for Rebel. Gavin Lambert is quoted as saying that Nick had an attraction to young teen girls his whole life, a trait that cannot be ignored when we see a 62-year-old Ray portraying a man being blown by an underage girl. And it is with Wood that Ray creates a the character of Judy in Rebel, a girl whose father puts up a wall of hate in part to sublimate his own incestuous desire for his daughter.  The themes of “The Janitor” were not new to Ray at all.

Scandalous enough in its own right, “The Janitor” has been given a reputation of outright salaciousness that it does not deserve.  In part, this is due to its proximity to segments containing softcore sex acts and graphic closeups, but I also believe the reputation derives from understandable astonishment of seeing a legendary director create a rough, cheap, and in no small part egotistical cinematic creation such as this.

These producer-supplied actors were from the adult industry, which Eisenschitz seems to think proves that the sex, even in “The Janitor,” was real. As informative as Eisenschitz is on other topics, I suspect he never had a chance to see the film. No one who sees “The Janitor” could possibly believe the oral sex was real. There is not a single hint of Nick’s flesh beyond his hands, and in fact the women look as though they are randomly mashing their faces into Ray’s very zipped pants; it’s decidedly silly, especially to our jaded modern eyes. 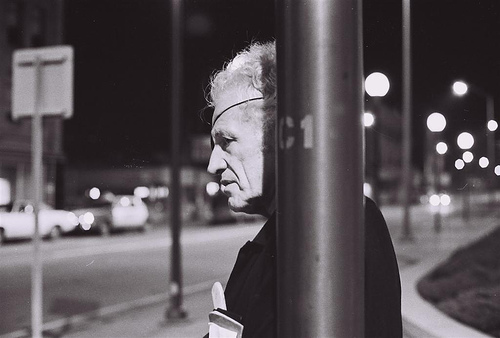 Our opening quote from Nick Ray appears in the documentary I’m a Stranger Here Myself (1975), filmed during the years he made We Can’t Go Home Again with his students, seems to contradict everything we see in “The Janitor.” The vignette is a veritable grocery list of Ray’s well-known neuroses, yet there is no deep insight into Nicholas Ray by the finale, and that’s because even in 1974, when he showed you his insecure, self-destructive, egotistical, neurotic, lustful side, he wasn’t showing you anything you didn’t already know. You knew, you simply did not speak about it openly… much like sex and pornography, the subjects of the other short segments.

It is apparently tempting to dismiss “The Janitor” as a product of Ray’s drug use and despondency, his desperation for money, essentially whoring himself out for a few bucks. The first time I heard of “The Janitor,” some long-forgotten soul on Usenet speculated that Ray was so disgusted with himself that he wrote this short as a kind of spiritual atonement for his artistic sins. That’s interesting, romantic even, but I disagree. I think Nicholas Ray struggled against authority and cultural constraints, and in “The Janitor” he is having a bit of a laugh at us and himself. His wife Susan has said, “Nick was a provocateur, a master wizard. …he was perfectly capable of running us all in circles and enjoying himself to the hilt while he did it. It wasn’t always easy but it was never dull, this sneak-magician part of him.” Nicholas Ray by 1974 was a cultural creation as much as he was a man, and the failings and neuroses we see in “The Janitor” are more about his image and the audience than they are about Ray himself.

This is my entry for Tony Dayoub’s Nicholas Ray Blogathon, a celebration of Nicholas Ray on his 100th birthday held at Cinema Viewfinder.

A new, reconstructed cut of We Can’t Go Home Again is appearing in Venice currently, will be shown next in New York and is to be released on DVD in 2012.

Citations:
* Beyond the Subtitle: Remapping European Art Cinema by Mark Betz.
* “Wet Dreams (1974)” by Giles Clark at Psychotic Cinema.
* “We Can’t Go Home Again” by Tom Farrell at La Furia Umana.
* “The Janitor” by Cullen Gallagher at Not Coming to a Theater Near You.
* I’m a Stranger Here Myself (1975), directed by David Halpern.
* “Dangerous Talents” by Sam Kashner, Vanity Fair, March 2005.
* Nicholas Ray: The Glorious Failure of an American Director by Patrick McGilligan.
* I Was Interrupted: Nicholas Ray on Making Movies by Nicholas Ray and Susan Ray.
* “Bigger Than Life: The Man Who Left His Will on Film” by Jonathan Rosenbaum at JonathanRosenbaum.com.
* Rebel Without a Cause: Approaches to a Maverick Masterwork by John David Slocum.
* Fantasies of Femininity by Jane Ussher.
* “Nicholas Ray’s ‘The Janitor'” by Ignatiy Vishnevetskyat Sounds, Images.
* Movies in the World.