Edit 07/06/2013: For anyone interested in doing their own project or research on Marie Prevost, please read the note at the bottom. Thank you.

This post originally appeared at https://www.shebloggedbynight.com/2011/03/marie-prevost-project-4-1918-and-1919.html and a copy can still be found at the Internet Archive here.

Here we are, languishing in another stretch of unavailable Marie movies. The credits on the IMDb have changed since I started this project, and some websites I had linked for notes have disappeared and are not cached, so this was a fun post to write.  No, wait, not “fun”… what’s the opposite of fun?

I’ll tell you what is fun, though: Discovering that El Brendel and Marie Prevost lived in the same apartment house! The gorgeous building at 1737 Whitley Ave in Los Angeles, known as the La Leyenda, was home to both El and Marie in the 1920s. Neat!

You know that I’m joking when I say this was a pain to write, though. It’s difficult and time-consuming, but ultimately I enjoy it. Otherwise, I wouldn’t do it. I have a terrific track history of ditching projects (and jobs and people and wardrobes and snacks and diets) that become too much work, so if I didn’t want to do the Project, I’d have stopped a long time ago.

***
* Those Athletic Girls (1918) – Released March 24, 1918. This was a 20-minute Mack Sennett short which I believe is lost. It’s interesting to note that Marie has an uncredited supporting role in this film, the first one released after her starring role in “His Hidden Purpose.” For the next several films — all shorts — she’s the lead approximately half the time and an uncredited background actress the other half. 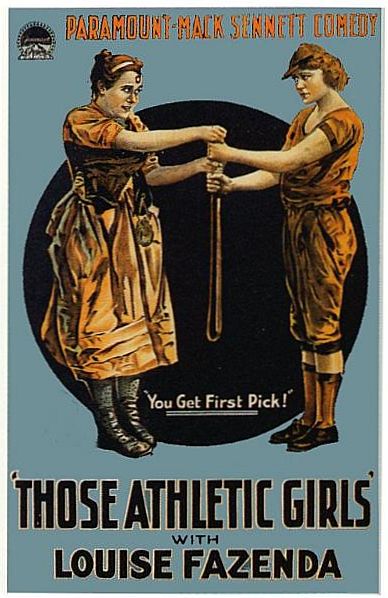 * Friend Husband (1918) – Released April 7, 1918, a few months before the Madge Kennedy movie “Friend Husband” was released. This short is obviously not the same film as the movie with Madge Kennedy, which apparently exists. This short doesn’t, though, and I can find nothing online about it. 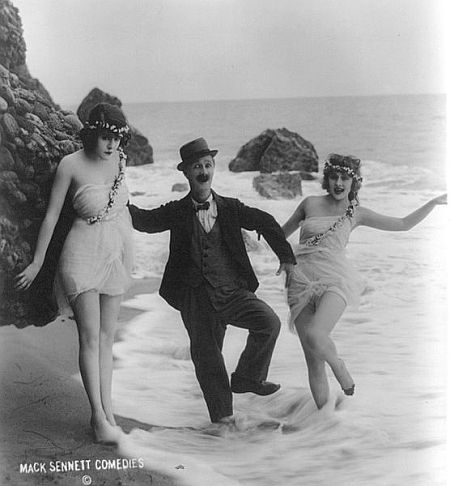 Ben Turpin and two lovely Bathing Beauties circa 1917, courtesy Mythical Monkey’s terrific post “Buster Keaton’s Pie Recipe”, which is highly recommended reading. Years ago I found a smaller copy of this photo from a fashion forum with the Beauty on the left credited as Marie Prevost, but it’s not her.

* His Smothered Love (1918) – Released May 6, 1918. Listed in the MoMA archives per Derek Boothroyd, who was enormously helpful by providing a ton of information that I used to compile this list. I can’t find a copy of this film available commercially or in, er, “rootpeg” form. Bruce Calvert has on his excellent Silent Film Still Archive site an advertisement for “Cupid Angling” which includes a mention of “His Smothered Love.”
* Her Screen Idol (1918) – Released July 1, 1918 per the IMDb. According to Wikipedia, a 1918 review in the Utah Examiner states the film is different than other Sennett shorts, and called the film “a humorous satire on the matinee idol of motion pictures.” I know nothing about the status of this film but presume it’s lost. 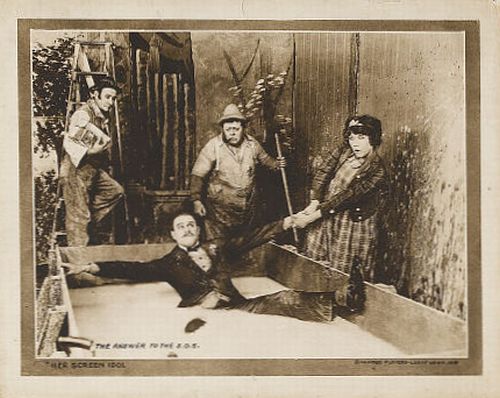 Lobby card for “Her Screen Idol” with Louise Fazenda. 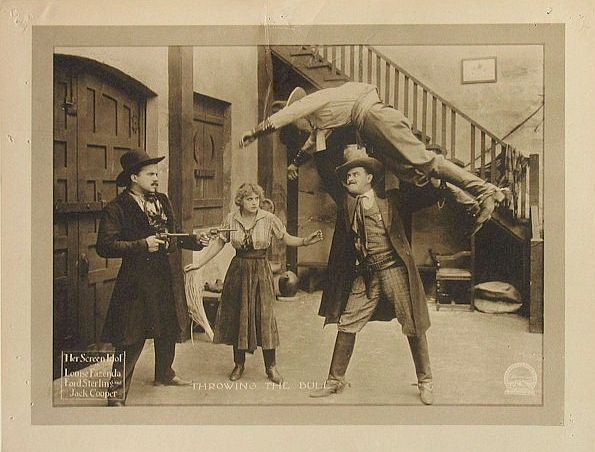 * She Loved Him Plenty (1918) – Per IMDb, released Aug 1, 1918. Robert M. Quackenbush wrote in Who Threw That Pie? (p. 32) that, “In ‘She Loved Him Plenty’ he (Ben Turpin) played a clerk in a pawnshop. The clerk began the morning by calmly and efficiently burning and wetting down a pile of clothes, then putting a sign in the shop window that said ‘Fire Sale.'” Ha!

I found very little about this film save a brief mention that this “scenic feature” appeared at the Rialto as the short before “Green Eyes” (1918). At the Peerless Theater in Greymouth, New Zealand, this “screaming two-reeler” was paired with the Dorothy Dalton film “Tyrant Fear.” 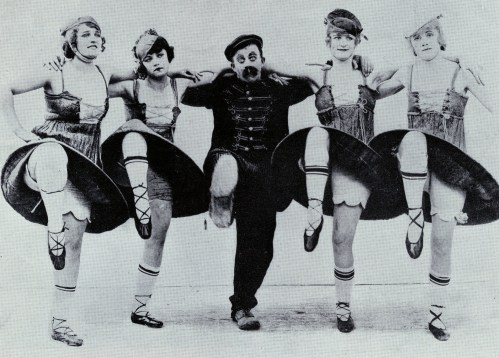 This one is a puzzler! I originally saw the photo above on Chained and Perfumed a couple of years ago. It’s credited as being a 1917 comedy, and that is obviously Chester Conklin the middle, with a dancer that looks like Marie just to his left. I asked on Nitrateville, where Richard Roberts speculated the far left dancer was probably Sybil Seeley, and in comparison I would have to agree. Now, per the IMDb, Marie and Sybil and Chester all appeared in “Secrets of a Beauty Parlor,” but Richard Roberts then informed me that they ran “Secrets” at Slapsticon in 2005 and discovered Chester was not in the film at all. Short story: No idea what film, if any, this picture is from. My guess is that is is from a film and not just a publicity photo, because that would explain the costumes, but why Marie looks unhappy and why someone took a grey editing pen to her bloomers is beyond me.

There is a cute ad from New Zealand here which states “It is a comedy upon which the management can stake its reputation.” 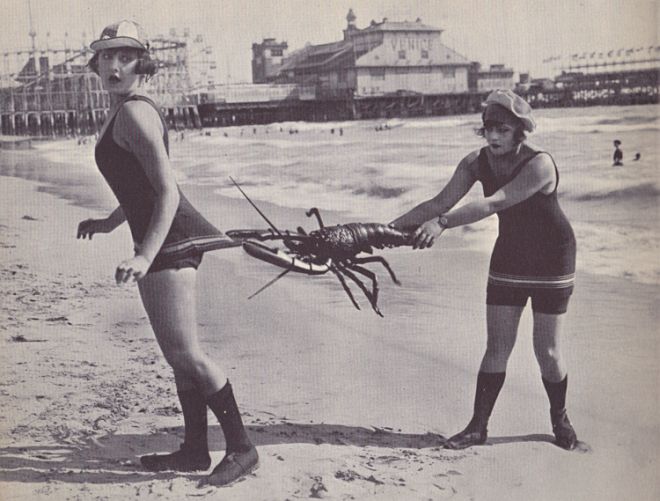 Above: From the 1933 book The American Procession: American Life Since 1860 in Photographs. The photos were compiled by Agnes Rogers, with commentary by Frederick Lewis Allen. This photo, credited to Culver Service, is from “Whose Little Wife Are You?” Per Allen, “The bathing costumes look quite orthodox to present-day eyes, but in 1916 such suits were worn only by motion-picture bathing girls.” Other photos of swimsuits are also featured as comparison, with Allen claiming that suits like this weren’t even worn until 1920, and not common until 1923. Interestingly, in the post I recently wrote here, the LA Times says the Bathing Beauty type suits had to be banned in 1920; obviously, enough women wore them that banning was required, so I think Allen’s memory may be off by a few years.

The above photo is a scan from my own copy of the book, which was part of the MGM library and used as research for costumes. It’s falling apart and, while readable, isn’t worth anything, but it’s fun to imagine someone may have used this book for costumes in an MGM film.

* Sleuths (1918) – Released Sept 22, 1918. The IMDb had this listed with a 1919 release date for a long time, but I think this updated 1918 date is the correct one. I know nothing about this film except that it was a 2-reel short and, sometimes, is credited with wacky punctuation: “Sleuths!” 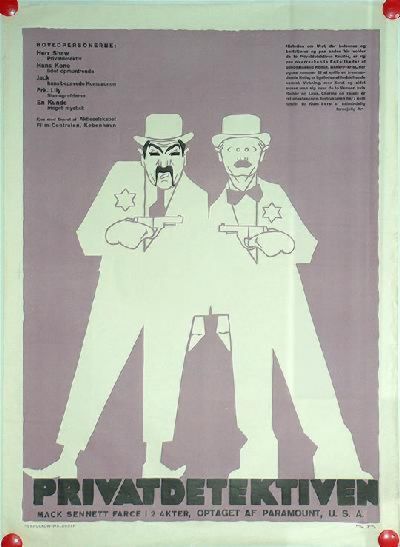 * The Village Chestnut (1918) – Released Dec 29, 1918 per the IMDb. I uncovered very little about this film, although All Movie Guide has a pretty comprehensive summary indicating it was a 2-reeler that Variety liked because the animals — I assume Pepper the cat and Teddy the Wonder Dog — were not part of the cast: “This is a Paramount-Mack Sennett comedy of the usual type, minus the animals… The picture has a wild laughing finish and on the whole is one of the most amusing of the Paramount-Sennett comedies.” I don’t believe the film exists. UPDATE April, 2014: A copy of the film not only exists, it’s currently being restored by the UCLA film archives! 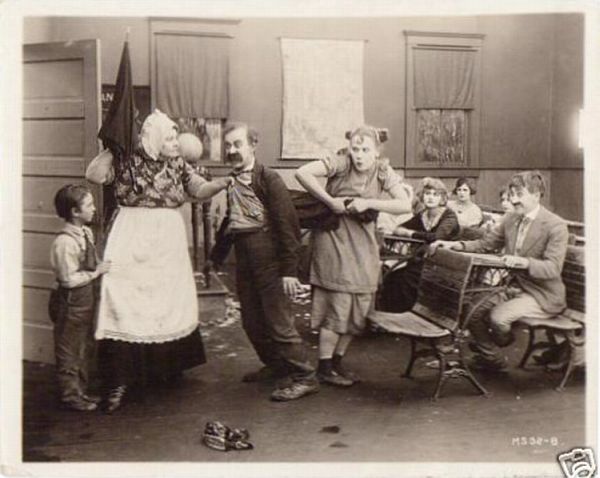 Someone correct me if this is wrong, but I believe this is a still from “The Village Idiot,” and that’s Chester Conklin being grabbed by Eva Thatcher on one end and Louise Fazenda at the other, while Paddy McGuire and his fake moustache laugh.

* Rip & Stitch: Tailors (1919) – Released Feb 9, 1919 per the IMDb, Marie’s part is uncredited and unconfirmed. If she’s in this film, it’s likely a cameo appearance, but since I can hardly find anything about this film I’m basically skipping it. 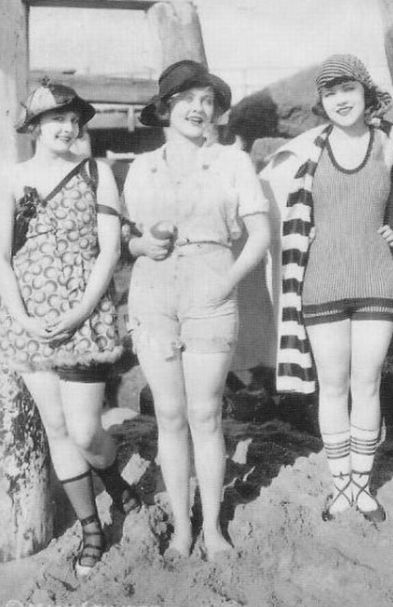 A Mack Sennett promotional postcard circa 1917. I have had this picture for years and unfortunately don’t remember where I got it, but joltenjoeswife on Flickr has the same card, and she identifies the Beauty on the left as Harriet Hammond. That’s Marie on the right and Phyllis Haver in the middle. Note Harriet has a suit either made of the same fabric as Alice Maison here, or it’s Alice’s suit modified to single-shoulder and with some fur edging added. 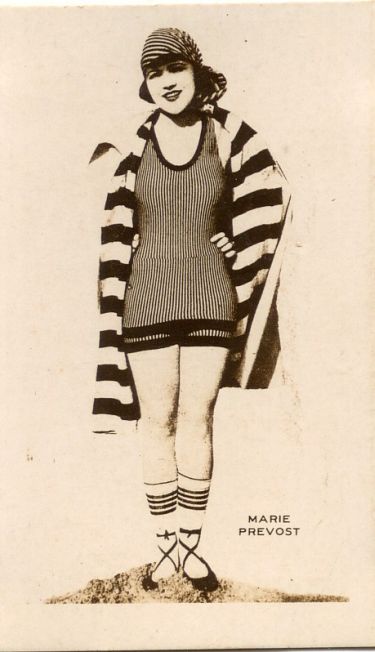 A Magpie Cigarette card from the same photo session. I believe Magpie cards were made from 1914 through 1918. The seller I bought this from didn’t know the year, but I will assume it’s about 1917.

* East Lynne with Variations (1919) – Released Feb 24, 1919 per Wendy Warwick White’s book Ford Sterling. For the curious, a picture of the advertising lantern slide for ELWV can be seen here. The film exists but is not commercially available. It’s listed in the archives at Filmmuseum (Amsterdam) per Derek Boothroyd.  “East Lynne with Variations” was a spoof on East Lynne, a British Victorian-era melodrama and the basis of 27 quajillion film adaptations. This 1919 spoof is probably based on the hit 1916 Theda Bara version of “East Lynne.” The Bara film is not available commercially but does exist in an archive, one of only a handful of her films that survive.  Bara’s film was apparently a hot tragic mess just ripe for parody. 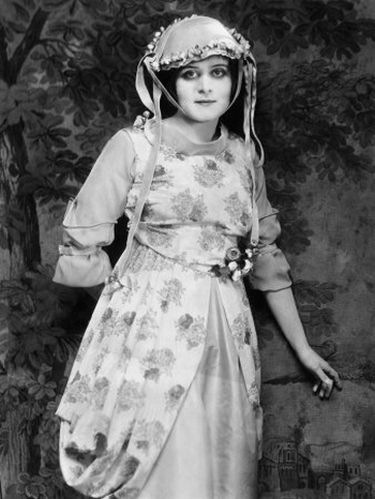 The serious East Lynne featured a long-suffering heroine who endured a variety of increasingly melodramatic ordeals in rapid succession. Marie Prevost plays the heroine in the spoof and apparently becomes humorously bored with the constant peril.

I don’t have many photos of ELwV, and two pics I do have are covered with enormous watermarks, so I will only link to them: Marie, bored and about to be sawed in half while the villain kills time reading a newspaper, and Marie trying to prevent the villain from taking a rug from her or something. Hal Erickson notes that the lady chained to a log about to be sawed in half gag originates from ELwV rather than the Theda Bara film, but I suspect the 1916 film had just as many silly perils as the parody did. 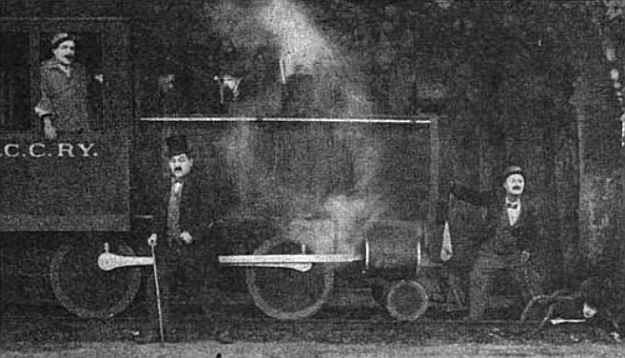 Photo from The Santa Fe Magazine, December, 1918. Note a tiny Marie in the very bottom right corner. The caption from the magazine: “In ‘East Lynne With Variations,’ a Paramount-Mack Sennett comedy, the contemptible villain tied the heroine to the rails just before train time, hoping thus to get rid of her so he could hog the balance of the reel. But here we see how the hero rushed in, pushed the engine back with his mighty right hand, while with his left he freed the heroine. Note how careful the heroine was to spread newspaper so her raiment might not become soiled.”

Ben Turpin is the hero of ELwV, and the book Vaudeville, Old and New described his performance in ELwV as one of his “best burlesks of the brave, glamorous, and powerful.”

Of all the missing Marie shorts and films, this is the one I most wish this film was available.  I am so obsessed with the idea of seeing this film that I’ve been dreaming about it. Plus, though I’ve seen dozens and dozens of silents, I have yet to see any damsel tied to the tracks, which I find unendurable and unfair.

Marie’s next film was “Yankee Doodle in Berlin.” There is no reason to be coy about whether it exists or not, as it was recently on TCM. But I have another quick post on Marie to finish up before we get to the movie about a drag queen who tries to take down the Kaiser.

If you’re doing research and would like to use these posts, please note the following:
1) You can use my blog posts for sources, but they must be credited in footnotes or bibliography (as should any book, blog, magazine, or other source). You cannot just cut and paste sections of my blog into your own work. Please know that I will not just ignore copyright infringement, should it occur.
2) There may be errors in my blog posts. You’re responsible for doing your own research and verifying anything you read.
3) I will not help you with your Marie Prevost research. Please don’t ask.
4) I own some memorabilia, photos, archival docs, etc., but I do not lend them out for any reason. Please don’t ask.
5) Despite any claim you may have heard to the contrary, I have not assisted nor collaborated with anyone in their book or article on Marie Prevost.