Edit 07/06/2013: For anyone interested in doing their own project on Marie Prevost, please read the note at the bottom of this post. Thank you.

This post originally appeared at https://www.shebloggedbynight.com/2011/03/marie-prevost-project-marie-in-news.html and a copy can be found at the Internet Archive here.

Note: As of 2013 some of the pictures that originally came with this post have been lost in a server move. They will be restored eventually. Thank you!

Larry Harnisch, researcher and blogger at the always wonderful Los Angeles Times Daily Mirror, sent me an epic tonne of articles on Marie Prevost from the Times archives. Since that was over a year ago, he probably wondered what the hell I did with all those articles. Well, I read ’em! And now I’m going to post about a few, not just because it’s interesting, but to help us all get a bit of an idea where Marie is at this point in her career.

Marie and Harriet Hammond, circa 1918.

Marie was publicized to a surprising degree during her 22-year career, so much so that it still shocks me that she would likely be forgotten today were it not for the mostly-exaggerated circumstances of her death. As I’ve mentioned before, she was on at least one magazine cover per month for several years in a row, and the Los Angeles Times entertainment publicity department certainly loved them some Marie.

Fascinating, too, is the use of Sennett Bathing Beauties for illustrations on basic human interest news articles in the Times, articles that ostensibly had nothing to do with films or Hollywood. It is an article of that type where we see our first mention of Marie in the Times, on August 1, 1916:

Original caption:
Marie Prevost
Of the Keystone Company, riding the surf board at the trials of the Balboa Water Carnival.

Yes, it’s a bad scan of a 95-year-old newspaper, and yes, that is a ridiculous title.

This particular article is about the Balboa Water Carnival at Balboa Beach, a 4-day affair which includes competitions, yacht racing, sports, and exhibitions. While there is nothing about acting or movies, I note that a Vera Steadman is listed as the national ladies diving champion runner up in the article, so there is a tangential connection between Bathing Beauties and this news story.

I couldn’t find the exact photo used in the article, but this appears to be from the same photo session:

In 1916, Marie is new to films, having started in the acting biz a year prior. I should note that much of Marie’s past was invented by Sennett as part of his publicity machine, and that author Charles Foster dispels many of those fake facts in Stardust and Shadows. A contemporary 1924 bio of Marie in The Blue Book of the Screen (courtesy Golden Silents) makes some false claims: Marie was not brought up in a “home of plenty” with a family that sent her to the finest schools available, let alone one in Denver. It also says Marie started films in 1917 when she really began in 1915 — that’s probably the result of a little age-shaving — and it states she didn’t work between that 1917 film and “East Lynne With Variations;” in truth, she was in 20 or more shorts prior to ELWV.

The Blue Book of the Screen article, however, does not mention another common claim from both Sennett and Marie, that she left for New York after high school and almost immediately landed on Broadway in “Midnight Follies,” then traveled to Hollywood to make it big in movies. Per the IBDb, there was no play on Broadway called “Midnight Follies,” and per her sister, Marie was a legal secretary in Los Angeles right after school, not a chorus girl in New York, and never had acting aspirations.

The truth is that, in 1916, an 18-year-old Marie was just a year into an accidental acting career, one that she was not yet taking seriously, and having the time of her life as a Bathing Beauty. When the Times article about the carnival was published, Marie had been a background Beauty in only 5 films. We don’t see Marie in the Times again for a full two years, until September 22, 1918. At this point, she was a 20-year-old Beauty who had garnered a lot of fan mail and occasional featuring roles in Sennett shorts, and she was now clearly invested in her acting career. Here, she is used for a photo in an article on The Reservist, a newsletter sent out by the U.S. Naval Reserves:

Humorist John P. Medbury of the New York Evening Journal created and edited the paper, but there is not a single word written about this newspaper, at least not online, which is ironic given the title of this article.

The original photos used in the article:

Not to skip ahead too much, but I thought this was amusing. Marie was featured in a 1920 Times article as an illustration of a prohibited bathing suit at public pools. It seems the city council decided Bathing Beauty-type suits were improper, and they issued an edict stating that women had to be dressed in the lengthy skirt suits of yore. A photo of Marie was used: 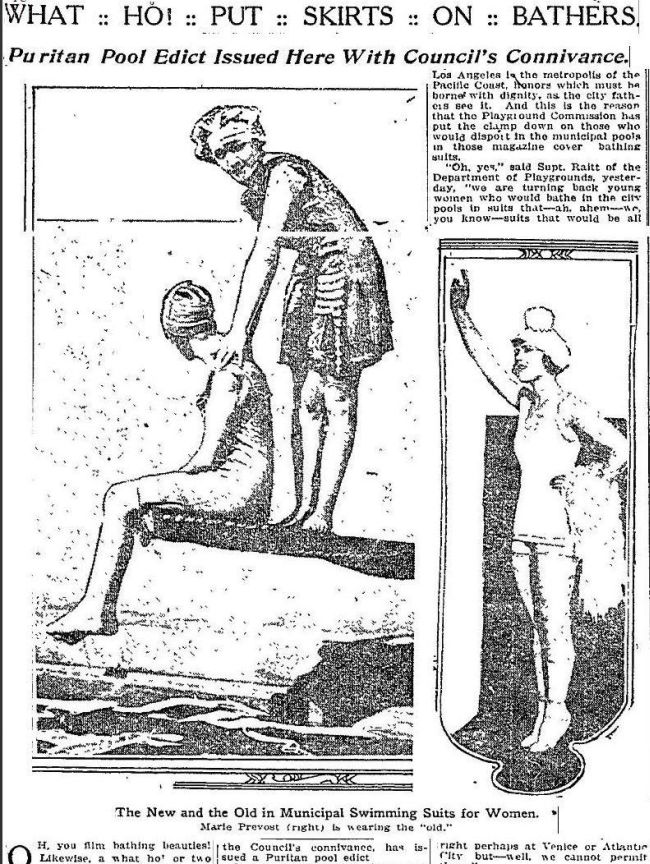 (You can see the full article here in .jpg format. Be warned: It is huge.)

But the Times apparently cropped a bit to edit out poor Teddy the Wonder Dog driving the boat. Now, I love Marie and all, but a dog driving a boat is always the best part of any photograph:

A cropped copy of the original photo, which you can see here at Dr. Macro.

Imagine my surprise when I changed my Silent Film calendar to March, only to see this exact photo of Marie… credited as Gloria Swanson! After a little investigation, I first speculated that the mistaken credit was because this looks like a promotional for the Swanson film “Teddy at the Throttle” (1917). I mentioned this to Rodney Sauer who promptly informed me that the throttle in question was a train, not a boat, and Marie doesn’t appear in the film anyway. But that’s not gonna keep me from seeing “Teddy at the Throttle”! Critics apparently hated Teddy the Wonder Dog, and to them I say, “Thbpt.” You can quote me. Also? Gloria allegedly gets tied to railroad tracks! Finally, I will see this silent movie cliche in action. 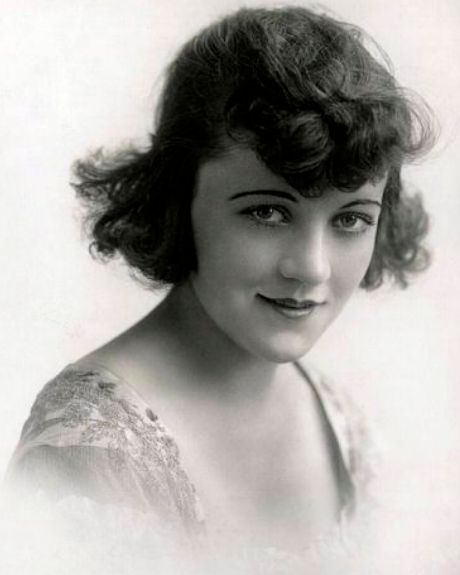 Marie, circa 1918.  Compare with this photo of Beauty Mary Thurman, who worked with Marie in Sennett shorts at the same time.  It is often difficult to tell them apart.

We’ll learn more about Marie as we continue on with this project. Right now, it’s 1919, early in Marie’s career but transitional, as her first role in a feature-length film is moments away, leading to her hitting it big by growing out of her “premier bathing beauty” role into a vivacious flapper. Soon we’ll be visiting “Yankee Doodle in Berlin,” a 1919 war spoof filled with so much WTFery that you will plotz. Also, I will provide proof (proof!) that Mack Sennett had a fruit fetish.

If you’re interested in doing research on Marie Prevost and would like to use these posts, please note the following:
1) You can use my blog posts for sources, but they must be credited in footnotes or bibliography (as should any book, blog, magazine, or other source). You cannot just cut and paste sections of my blog into your own work. Please know that I will not just ignore copyright infringement, should it occur.
2) There may be errors in my blog posts. You’re responsible for doing your own research and verifying anything you read.
3) I will not help you with your Marie Prevost research. Please don’t ask.
4) I own some memorabilia, photos, archival docs, etc., but I do not lend them out for any reason. Please don’t ask.
5) Despite any claim you may have heard to the contrary, I have not assisted nor collaborated with anyone in their book or article on Marie Prevost.