It may be the end of 2011, but I have no year-end lists or resolutions or anything of substance to say, really. Just a few goals for SBBN, a slight modification to my previously-announced plans, and a bit of randomness.

One of the best and first film bloggers I have encountered in our vast blogoverse was Arbogast on Film, whose keen eye for sublime cinematic visual moments and incisive analysis made his blog a must-read for anyone.  Arbo has announced his blog is shutting down, and while I am happy to hear that he’s retiring from blogging because his real life work has picked up, I’m still ridiculously sad. I learned an immeasurable amount from his blog over the years and Arbo has earned my undying gratitude. Thank you, Arbo, for everything, and best of luck!

My dear SBBN readers, there is no schedule for this month, but I would like to refer everyone to my BBFF Ivan’s January TCM schedule post. It is comprehensive and uncommonly good, just like those cookies made by tree-dwelling two-dimensional freaks of nature.

As for the schedules posted on SBBN, if anyone really really reallyreally wants me to keep including Sundance Channel, this is your last chance to say so. Their schedule is more TV shows than movies, plus the online schedule webpage is clunky and late to update, so I’m inclined to drop Sundance altogether from my future schedule posts.

Things have been a bit sparse around here lately, but at least it’s because I’m working too hard instead of not working at all, so that’s a change. This current project is kicking my ass, leaving me semi-conscious on the pavement while rifling my pockets for all my spare time, but I think it’s ultimately a good thing. I think. I… think. Remember when I wondered aloud how hard this serious writing stuff was going to be? Now I know! Ha ha!

Sure, maybe I’ve lost some of my sanity, but I’ve also learned that I cannot do a series of these projects end-to-end as I had originally planned. Once this project is done, expect the shorter posts and the Phantom Creeps series to continue apace. I’ll need the breather. But until the project is done, things will be dead as fried chicken around here. If you simply cannot go more than a few hours without reading my unbelievably genius prose, there’s always Twitter. I am on the Twitter; I’m given to understand many of you are, too. Perhaps we can exchange geniusness on the Twitter?

I have little to say about 2011 except that it has been anything but boring; it has been exciting and frustrating and has stretched the limits of both my thigh muscles and my sanity, so that’s neat. Unless the Mayans come down in their calendar-shaped spaceships and take us all to Valhalla, naked and in tubes, 2012 looks to be like another doozy of a year.

My very sincerest thanks to you all for reading SBBN, humoring and encouraging me, and inspiring me with your own blogs and comments. Have a wonderful 2012 full of the kind of excitement you most desire! 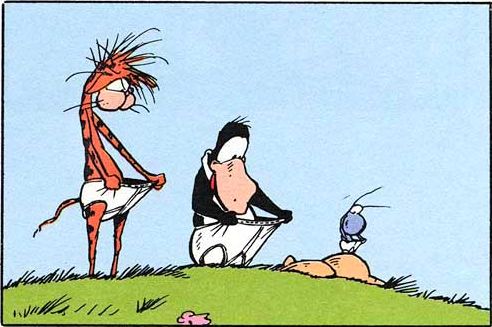