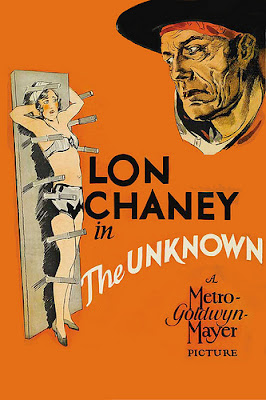 Related: the first of what should be many Flickr sets: The Unknown.

There are, apparently, multiple prints of the Lon Chaney classic The Unknown (1927), though sorting the whole situation out is difficult to the point of impossible. In June and December of 1997, TCM showed an amber tinted print of The Unknown (1927) that I really enjoyed. By August 1998 they had begun showing the black and white version we see today, which is the historically accurate version, or at least is probably the historically accurate version.

We had a nice discussion about it on alt.movies.silent several years ago. The black and white print on the DVD and on TCM is from a French copy that was basically lost for a while, filed away with unknown/unidentified films thanks to a confusion with the movie’s name. The titles on the current version were inserted in 1978 if I’m reading the Roman numerals on the copyright notice correctly, and are not original to the film. I believe the content of the titles are original, but I do not know, because someone on that alt.movies.silent thread indicated that his old 9.5mm print had significantly different titles.

Also, Joan Crawford’s name is different on the print I saw: She was Estrellita. According to Jon Mirsalis’ excellent website, the original cutting continuity lists the character as Nanon, but Mordaunt Hall of the New York Times saw her name as Estrellita in 1927. Not only did the amber tinted print I see exist, but there was a report of a sepia toned print shown in theaters in France in the 1970s. Though the consensus on AMS was that the film was originally black and white, there was some question as to whether MGM simply didn’t bother listing any original tinting/toning in film records by 1927. That might mean Unknown was tinted or toned but just not noted as such in MGM files. 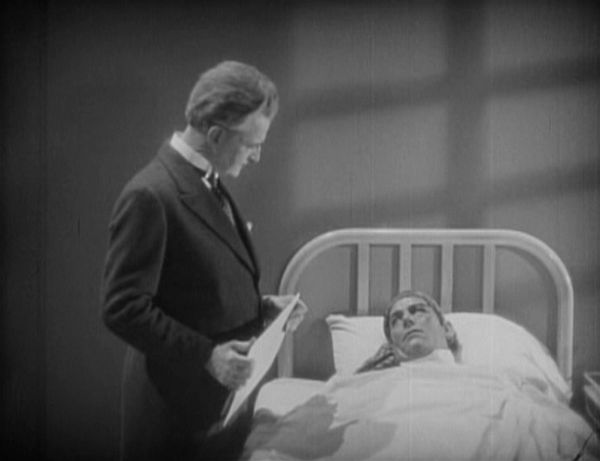 I laugh every time I see this: Alonzo in a hospital recovering from major surgery… with his gypsy scarf still on his head.

I bring all this up not just because it’s interesting, but because these differences change how I perceive the film. My first viewings of The Unknown were the amber tinted Estrellita ones, much softer because of the condition of the film, and that’s the version I really came to love. It’s been well over a decade of nothing but the black and white, sharper, crisper Nanon version, and I just cannot warm up to it. The more modern title cards are jarring to me. Yes, if I see a font that doesn’t jibe with the era the movie was made in, it rattles my nerves. I’m delicate.

What I liked most about the amber tinted version was the trick of the gauze over the lens. It looked like straw and had a glow. This is how it looks in black and white: 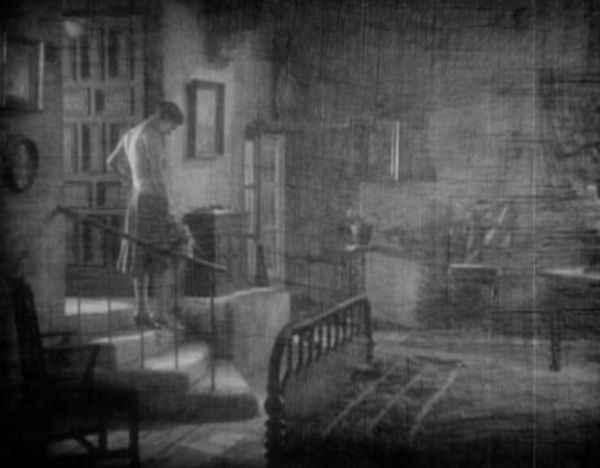 Visually interesting but somewhat flat. Perhaps my memory is overwhelmed with nostalgia and the old TCM print wasn’t very good at all… but let me put out into the Internet ether again that if you have a copy of the old tinted/toned print, I would love to see it again. 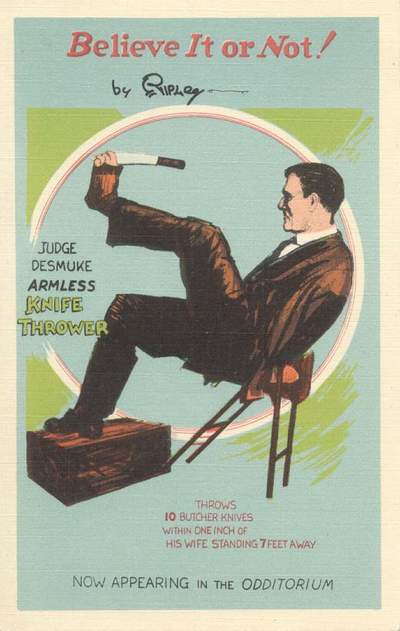 Paul Desmuke was an armless circus performer who doubled for Chaney and did many of the leg movements. As far as I can tell, the promotional material in 1927 claimed Chaney did all his own work with no mention of Desmuke. Read more about his life in the circus and his career as Judge Paul Desmuke, justice of the peace in Atascosa County, Texas.

As I’ve become older and, I hope, a more educated film viewer and critic, I see less to love about The Unknown. That’s not easy to say, because it is single-handedly responsible for my love of silent films and TCM. That amber tinted nasty old print got me hooked for good on old films; yet, I have to admit The Unknown has some flaws. 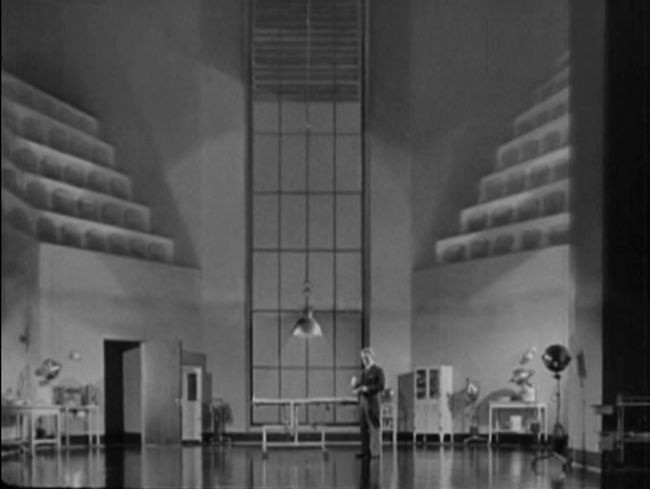 A surprising, brief moment of art deco in the middle of The Unknown.

Chaney’s character of Alonzo is a psychopath, but for inexplicable reasons, he’s portrayed as a man who truly loves Nanon. My bestest movie reviewer boyfriend Mordaunt Hall noted this in his 1927 review, stating that Alonzo “deteriorates from a more or less sympathetic individual to an arch-fiend.” I disagree somewhat because Alonzo doesn’t deteriorate. He’s not revealed as a monster as the film progresses but rather wavers back and forth, at the end snapping because of circumstance and a broken heart. 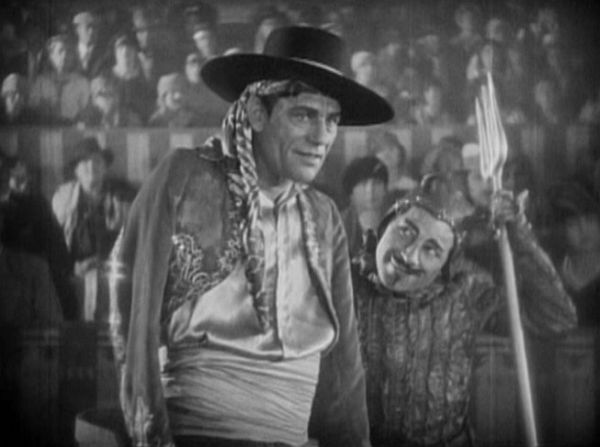 We first see Alonzo gazing sweetly at Nanon with Cojo (John George) as the devil, making Alonzo look metaphorically saintly by comparison. When he kills Nanon’s father, it’s after we have learned Nanon has an intense fear of men touching her because, she says, men have wanted to paw her for her whole life. Since she’s roughly 20 years old when she reveals this, it’s safe to say she was “pawed” as a child, possibly by her drunk and brutish father. Nanon’s father’s death is not problematic; the audience figures he deserved it.

But we also see during this time Alonzo willing to trick strongman Malabar (Norman Kerry), who loves Nanon himself, into manhandling Nanon; Malabar doesn’t realize this will have the opposite effect he’s looking for. 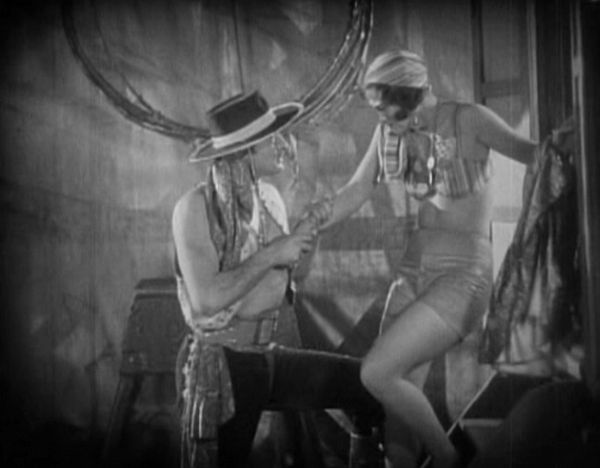 A man like Alonzo who is willing to put his beloved through psychological torture is not a sweet, kind man. And when Cojo suggests Alonzo should leave Nanon alone because it will probably not work out anyway, his outburst suggests possession rather than love.

Cojo is frightened because he knows about Alonzo’s past, and we are given a brief glimpse into it with a note sent to a surgeon Alonzo once knew, and the fact Alonzo is pretending to be armless to evade the law. These things in the past are revealed during the film to make it seem like his sweetness has turned to psychopathy, but I think most in the audience are going to do the chronology in our heads and realize this was a man with a problem before he even met Nanon. We see him screaming that he will do anything to own her. We know what’s what.

But then Alonzo acts sweet in Nanon’s presence, and he’s not a master manipulator faking emotions to possess the girl. He’s genuinely portrayed as the giddy schoolboy when he’s kissed by Nanon. 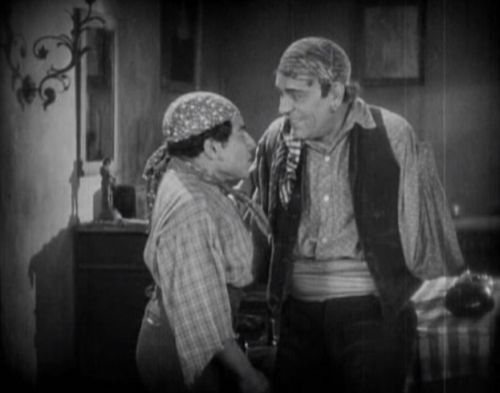 The attempt to turn overt evil into mere sinister undertones is not effective, and it’s a detriment to the film. We already get undertones with the reason Nanon cannot have a man touch her, with Malabar’s insistence on manhandling women, and with the unspoken reason Cojo sticks with Alonzo despite his violence. We need big sloppy delicious evil, but sadly, Alonzo does not deliver.