I have dithered about posting any of this publicly for a very long time, and because of the way discussions about these issues tend to go, I have disabled comments. Further, because I will be mentioning names and blogs for clarity’s sake, I do not want anyone to go off in comments on any of these people, deserved or not. I’m not interested in insults or retribution. What I want is to state publicly, with as much information as possible, why I had problems with the online movie organization The Large Association of Movie Blogs, i.e. The LAMB.

I quit LAMB almost exactly a year ago, in the summer of 2011. It’s come to my attention that there has been a bit of a dust-up amongst LAMB members over the last few days, about the Best Classic Blogger award given by The LAMB. My concern is that the way it is being handled is exactly how my issues were handled, or rather not handled, two years ago.

The LAMB was founded by Dylan “Fletch” Fields in 2007, and bills itself as “the premier movie blog directory – a one-stop shop for readers and bloggers alike.” Film blogs of every genre join, are featured in an introductory post, and can participate in various events.

After participation on LAMB for a while, I didn’t feel it was a very good fit for me, but I stayed in it because there are, frankly, only two movie blog associations I could join. (The other association, the CMBA, asked me to edit my posts to meet their personal standards and I refused. Call me a snob or a jerk or whatever, but I’m not going to join an association that wants me to censor myself.) The LAMB, though problematic, was the only one SBBN was eligible for, and I wanted to network.

But my first problem was that the networking on LAMB was haphazard and time-consuming. There are forums, a blog, Twitter, podcasts, and a Facebook, and because information was deliberately spread across all these media, it was impossible to keep up with everything without investing a lot of time. In return, SBBN got almost nothing by way of increased exposure or events that I could participate in, because events at that time were geared entirely toward bloggers who wrote about new movies or, sometimes, horror blogs.

Then came the awards. Every year in June, The LAMB holds The LAMMY Awards, where members vote on best blogs, best blog names, etc. My first year to be nominated was in 2009, where I tied for Best Blog Name with Careful With That Blog, Eugene.

Except the final vote, which is still available at Mister Poll, doesn’t match the announcement. Careful With That Blog, Eugene had 15 votes, SBBN had 16, but suddenly CWTBEugene lost one vote, I lost two, meaning we tied at 14 each.

There are other examples of the votes shown on Mister Poll not being reflected in the LAMB official post but which did not affect the final outcome. In fact, almost every vote shown on LAMB was different than what was seen on Mister Poll, but the difference was never consistent. Some blogs would have a difference of one vote in a category, but a difference of two votes in a later award category. So I don’t think this was a case of someone voting twice.

I asked in email about the voting discrepancies and received no answer. I want to note that I have no evidence of any “wrong-doing,” just a feeling that things weren’t as transparent or explained as they should have been.  Others must have felt similarly, because there were a lot of titters amongst LAMB members at how much Dylan wanted his own blog, Blog Cabins (now defunct, I believe) to win awards.  And perhaps not incidentally, the 2010 voting tallies were made private so people could not see the results.

So, about those 2010 awards. They were announced via podcast with Dylan “Fletch” Fields and Rachel of Rachel’s Reel Reviews. As my friend Ivan pointed out on Thrilling Days of Yesteryear, Dylan stated he wouldn’t go to classic or horror film blogs at all, and Rachel said the awards for classic and horror blogs were mostly unnecessary.

As you can see in comments on that TDoY post, Dylan and I engaged in a brief back and forth on the issue. My point then, as it is now, is that everyone in LAMB who was eligible or nominated for one of those awards they trashed now got to feel uncomfortable about it. The owners and maintainers of LAMB said multiple times they didn’t like “genre blogs,” didn’t read them, and entertained the idea of doing away with the awards altogether because of their dislike.

Very quickly, Dylan dismissed what was said by blaming the voters for the award results, which would be fine if those votes in 2009 matched what LAMB posted in the results. And I felt Dylan deflected what I said by getting hurt feelings over my specific examples of what I felt LAMB had been doing that kept members from participating. LAMB doesn’t have a lot of participation; according to The LAMB’s Twitter, there are over 1200 members, while according to Dylan on Twitter (see below), only 80-something take part in the final votes, which is the way it has been since 2009.

After the 2010 incident, LAMB did start a new weekly feature called Classic Chops to promote classic movie blogs. They already had one for horror movie blogs, though despite having the feature to promote horror blogs they still had complaints about “genre blogs.”

And in 2010, SBBN won that Best Classic Movie Blog LAMMY that Dylan and Rachel had mused about doing away with completely.

At this point, I felt LAMMY went from being not worthwhile for SBBN to actively problematic. I didn’t want SBBN to be the recipient of an award that was (and probably still is) so undervalued by the people who are giving it. I quietly stopped participating in anything on LAMB, and in 2011 emailed Rachel to ask to be removed from any nominations for 2011 LAMMYs. Then I changed my mind and decided to quit altogether. Rachel, despite having been part of the podcast issue the year before, asked what was going on, as she claimed to have no idea why I wanted to quit.

I know it’s mostly frowned-upon to post emails, so I hope that you will all forgive me for quoting some parts of Rachel’s and my email exchange. When asked by Rachel why I wanted to leave LAMB, I said in part:


Dylan … shut down my attempts to discuss my concerns… Then She Blogged By Night ended up winning one of those awards you didn’t think should even exist.

It was extremely uncomfortable both for me personally and for the blog, and I think it’s a pretty good sign that LAMB and SBBN do not have a mutually beneficial relationship. I was genuinely shocked to find out I was still on the membership list, to be honest.

Though my personal opinion on the subject may have created some hurt feelings, I had my reasons and do not apologize for what I said. However, now that I’m the “shepherdess” I feel inclined to stay impartial, despite the insults and name-calling hurled in my direction over the matter.

I never asked for an apology nor wanted one, nor do I recall any “insults and name-calling” during the incident. I even asked around after getting her email because I thought perhaps some other drama had gone on that I wasn’t aware of, but if there was, I never found it. My suspicion is that she was saying I was the dispenser of personal insults; that is, after all, pretty much what Dylan had said in 2010 on that TDoY post I linked above.

Rachel, as far as I know, is not a LAMB “shepherdess” any longer, and I don’t know Dylan’s official role on LAMB. What I do know is that several bloggers I follow on Twitter had — or at least tried to have — a discussion with Dylan about an incident that happened recently. Because I’m not a member any longer, I am not at all privy to what happened except to know that there is a problem, once again, with The LAMMYs Best Classic Blog Award; my understanding is that a blog that was not a classic blog won the category.

This is how Dylan responded to bloggers who had concerns:

Many issues have been brought up to him in the past. I just outlined a whole bunch of issues, and we’ve seen how he dealt with those.

Here’s the next amusing part of the conversation. Note: Read in reverse order, from bottom to top. (Twitter is weird.)

It’s the old “the voters are to blame” argument again, exactly like what he told me two years ago. And another fun one:

That is a definition of “gone out of my way” that I am not aware of.

The worst part, the thing that got me to write this post in the first place, was his response to Garbo Laughs in this exchange. This one can be read from top to bottom, and it starts, as you will notice, with him snottily acknowledging that this LAMMY issue has come up before. Since Brandie was making the exact same comments I had made two years ago on that TDoY thread I linked above, I guess he decided it was futile to keep claiming he had never heard of any of these concerns: 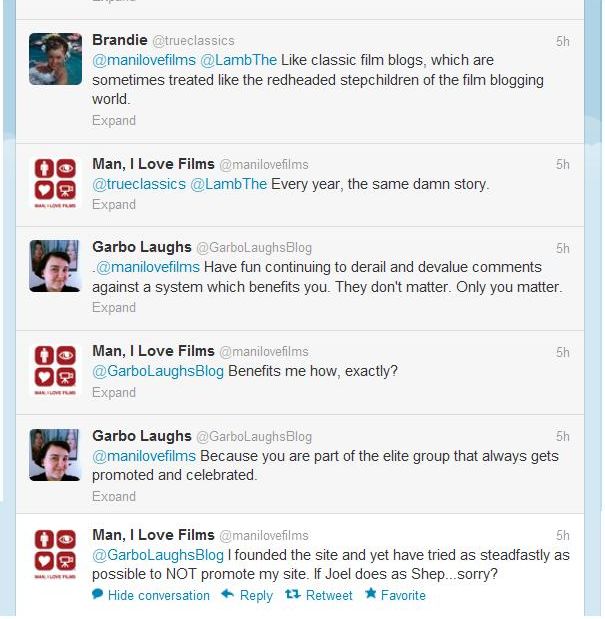 And the hilarious conclusion: 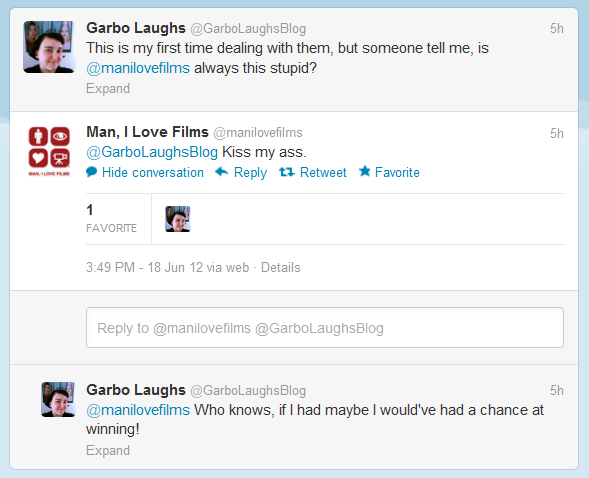 To answer Garbo Laughs: Yes, Dylan is always like this.

My experience with The LAMB has been almost universally unpleasant. Well, that’s true with both movie blog associations; I (and others) have been banned from some blogathons held by members of CMBA and have had CMBA members demand I stop writing the way I do — I get this and I was never even a member of CMBA! With The LAMB, I made a lot of blog friends early on.  Relationships with multiple LAMB members were strained after my problems came to a head in 2010. Most other bloggers didn’t want to hear what I had to say, basically, especially since it dealt with awards and people assume any complaint about awards is “sour grapes.”

It’s far too easy to dismiss problems in this manner, which is why The LAMB has had problems with their LAMMYs for four solid years now. It’s because they constantly say it’s sour grapes, it’s all the fault of the voters, we’re not a clique, you never told us there was a problem, you’re just mean, also kiss my ass.

And the problems continue in part because people like me never made the issues public.  That’s why I feel like I have been a part of the problem. When everything happened in 2009 and 2010, I was constantly dismissed, but I didn’t help matters because my frustration welled up until I was rude to a few fellow bloggers who didn’t deserve it. In the aftermath, it was easiest to clam up and pretend the whole thing never happened, which is what I did. I now regret it, because history is repeating itself, only The LAMB members didn’t know there was a history in the first place.