Welcome to the fourth repost of The Phantom Creeps recaps, brought over from the old She Blogged By Night blog. If good things happen — and it won’t; listen to Louis CK, kids, because he’s right about everything — once the reposts are all moved over, I’ll finish the recaps, giving me time to move on to the next poorly thought out project of mine.

By all rights, this should have been called Chapter 4: Officially Out of Both Sanity and Ideas. Watching this chapter was one of the most pointless 20 minutes I have ever spent and was only redeemed — slightly redeemed — in that it captured on film the emotional and physical pain Regis Toomey had to endure to make a living in Hollywood.

Chapter 4 starts out well enough by not completely cheating on the cliffhanger. While the crashing antenna missed the car, Regis’ expert defensive driving technique does cause the vehicle to careen off the road and down a mild hill. 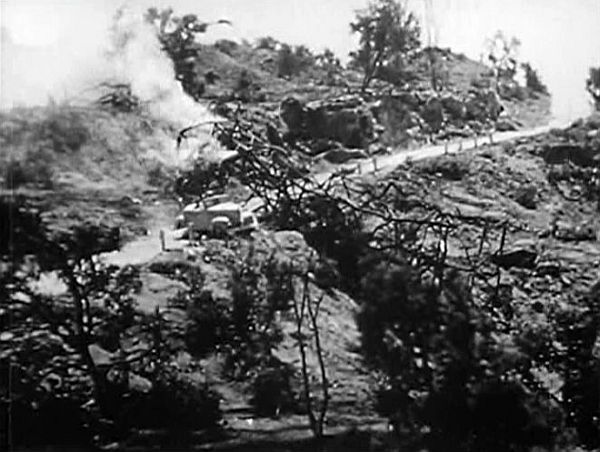 Pretend this cute little model is an actual car.

The prisoner Monk escapes during the chaos. G-Man Bob is unscathed as always (I hold out hope that around Chapter 10, it will be revealed he is a robot made of Teflon and fiberglass), but the Toomster gets knocked out again. By all rights he should have experienced enough head trauma to be entertainingly off-kilter at this point; alas, he is no Zaroff or Uncle Charlie. He does however have the presence of mind to be very cranky when G-Man Bob rouses him in the middle of a field. Toomey knows that unconsciousness is the best case scenario: A paycheck without having to actually do any work. 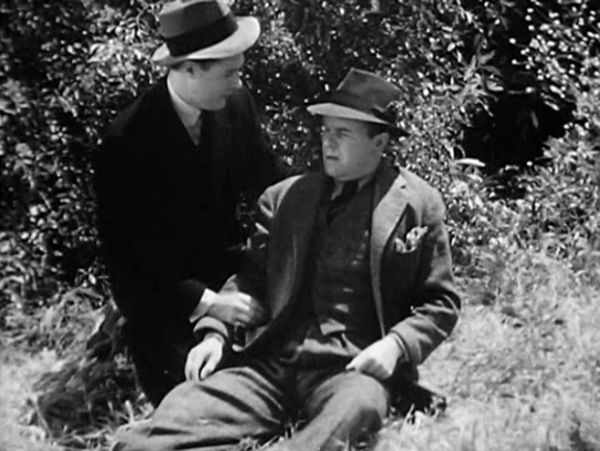 Toomster also knows that this production is in so much trouble that it’s about to embark on five full minutes of tiresome repetition just to fill out a chapter. He suggests they go after Monk, but G-Man Bob again says apprehending the bad guys is not important. Instead, he trots to the nearby car to retrieve Dr. Zorka’s magic meteorite while Regis dusts himself off. Monk knocks Regis unconscious again and steals the meteorite again. Bob shoots Monk in the arm again, he loses the meteorite again, Bob retrieves the meteorite again and rouses Toomey from his stupor again. Regis suggests they go after Monk again and G-Man Bob says it’s not worth it again. Zorka discovers the meteorite missing and, when Monk returns, is again convinced by Monk — who is a shitty damn liar, by the way — that he had nothing to do with the loss of the meteorite again. Again again fucking again with this movie. This is so sad, you guys. I feel sorry for the innocent shrubbery and blades of grass that were slightly disturbed in the making of such a pitiful excuse for entertainment.

The only redeeming moment in this entire sequence is when Zorka threatens Monk with the Iron Man: 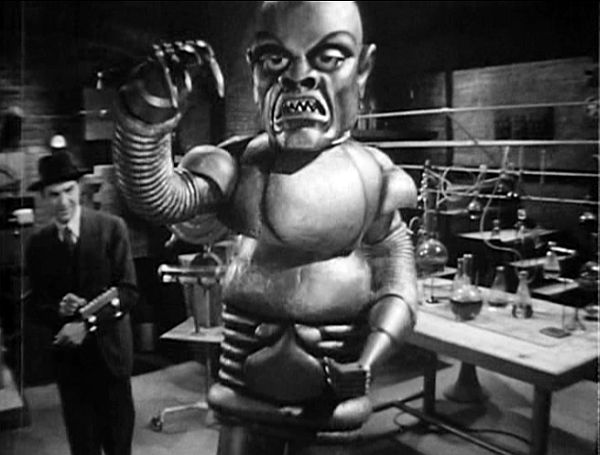 Watching Iron Man flail around with clumsy evil claw arms through Monk-O-Vision is pretty awesome, and frankly it was the only thing that kept me from chewing my own foot off in despair.

Zorka feels sorry for Monk, so he proceeds to tend to his sidekick’s gunshot wounds with a special healing ray. The ray is a spinning glitter-covered fan with light bulbs attached. It looks all the world like something you would find in the back room of a small Midwestern head shop, nestled between a stack of decades-old Zig Zag rolling papers and a dust-covered, impotent Lava Lamp that can barely manage one pitiful blurp every 10 minutes. 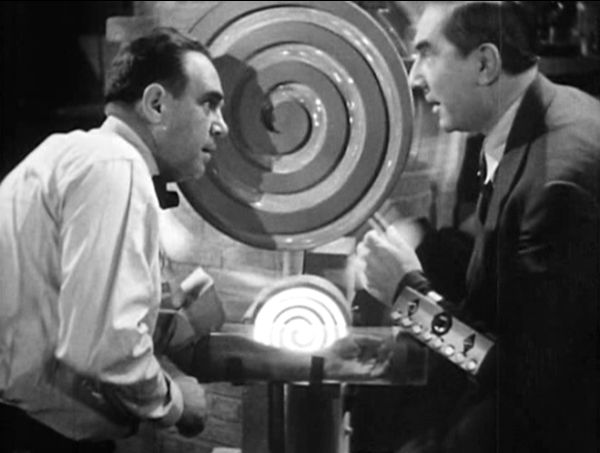 The glitter fan looks even sillier next to the spliced-in footage of some of Kenneth Strickfaden’s delicious Frankenstein equipment. To this day I’m not sure why I didn’t just hit STOP and watch Frankenstein instead of finishing this hot mess of a serial.

Regis — whose character’s name is Jim Daly, by the way, but since he didn’t bother trying to act like Jim Daly, I’m not going to bother calling him Jim Daly — arrives back at the lab with G-Man Bob and the meteorite safely encased in that rickety wooden crate. Such safety precautions they take. The pair is accosted by Plucky Girl Reporter, who has obviously emotionally checked out of this serial. 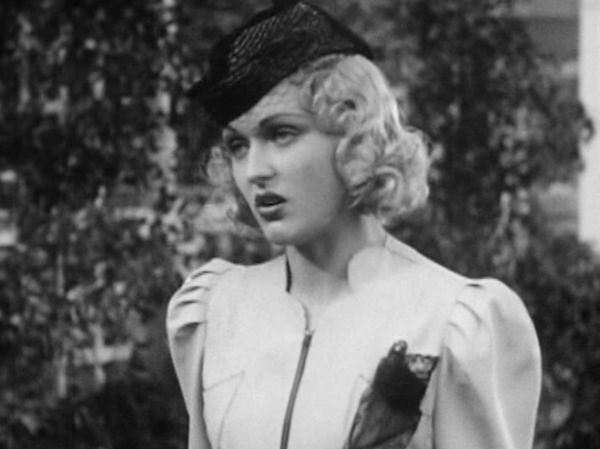 Oh god, those dead eyes of hers. Heavy-lidded and vacant, they’re reminiscent of the Iron Man’s, yet Iron Man only acts when directed to. PGR has free will, and she is so bored and belligerent you expect her to start dousing extras in kerosene and throwing matches at them just to feel momentarily alive.

The meteorite is delivered to the good doctor while PGR pretends to care. She doesn’t care. She barely reacts when an Invisiblated Dr. Zorka opens a door behind her and sneaks past her, although I am certain she knew the doors didn’t open by themselves. She knew it was Zorka and was actively hoping he would start disemboweling and skullfucking everyone in the lab, which is why she let him pass by unchallenged. InvisiZorka doesn’t do anything at all, so she wanders off while the Toomster and the doctor drive somewhere — does it really matter where at this point? — with the meteorite. 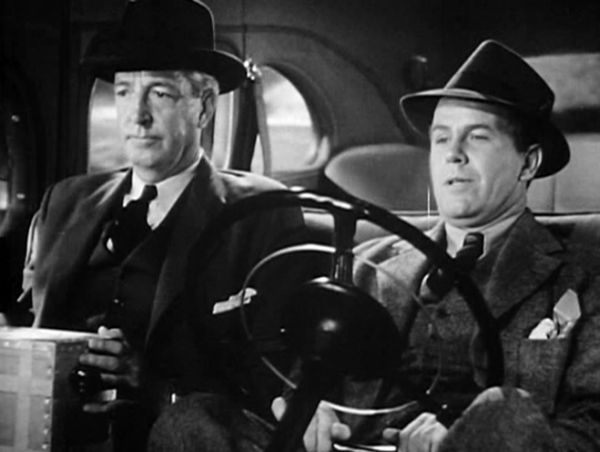 Hey Toomey, you think you could at least try to put your feet where the pedals in a car would really be? Or is pretending too hard for you?

The spies chase them down and get the meteorite (again) while Zorka, bored and sullen because he barely figures into this episode, explodes some ArachnoBlams in his lab for the lulz. Eventually he decides to attempt to reclaim his meteorite, which the spies have taken to their secret airfield. 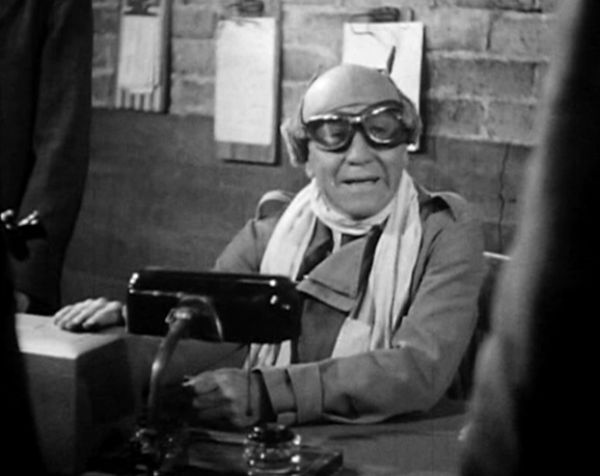 The leader of the spy ring, looking dignified.

The G-men and PGR are held against their will, with one of the extras making sure he pushes Regis around extra hard as they’re herded into a corner to await their fates. The head spy guy looks so ridiculous that when the camera pans to the captives, you can see Regis Toomey trying not to laugh at him: 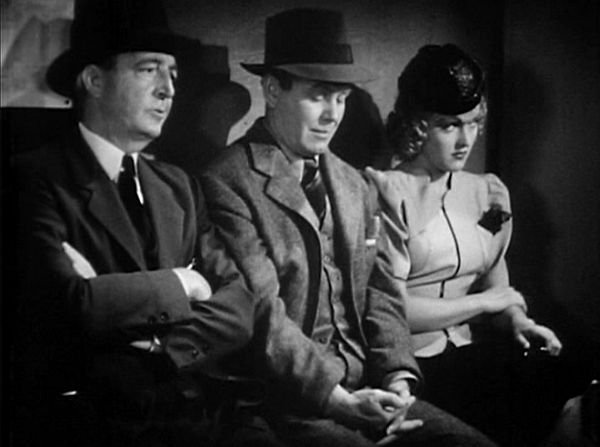 About this time, G-Man Bob realized that the doc, Regis and PGR were in trouble when he found their abandoned car. While searching it, he discovered they managed to stash the meteorite in the vehicle and hand over a fake to the spies.

Hilariously, this error in lighting makes it seem as though it took hours for G-Man Bob to search that car; it was afternoon when he arrived, the dead of night when he finally found the box, which had been sitting in plain view in the back seat the whole time. He left his friends in the captivity of a creepy dude dressed like an incidental Mel Brooks character for hours out of sheer stupidity. 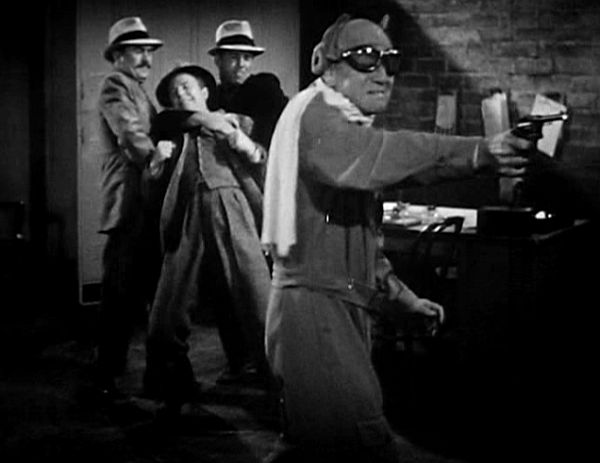 There is nothing about this that I do not like. Henchmen with fake moustaches jostling Regis Toomey while the doughy and ridiculous ringleader is so scared of his own handgun he looks like he’s going to burst into tears.

Just when the chapter is starting to redeem itself after the initial endless repetition of the first third, we get another oh-no-maybe-the-plane-will-crash cliffhanger. PGR falls into the gears of a waiting airplane and causes it to take off on its own, which is very believable. G-Man Bob is on board but, having gotten his fool ass shot by the ringleader, is completely unresponsive, yet PGR spends her time trying to wake him. He wasn’t able to fly the plane in Chapter 2, honey, what makes you think he could fly it now?

The plane flies directly into some power lines as Regis Toomey looks on helplessly, although I imagine he is one smug bastard at this point since he ends this chapter completely conscious for the first time.

I’d ask you all to stay tuned for the next episode to see if G-Man Bob and Plucky Girl Reporter survive, but frankly, I don’t give a good goddamn about those two anymore. I only want to see Iron Man, Zorka, Regis, and the ineffectual spy ringleader who obviously gets off on wearing a series of cheeky LARP costumes while on the job. So stay tuned for the next installment to see if we were lucky enough get rid of the two dimmest, least likeable characters in Chapter 4.