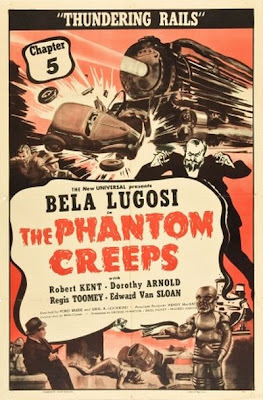 This is the recap for the fifth episode of The Phantom Creeps. Originally published on the old She Blogged By Night, I am reposting them here as a lead-up to the final episodes. Enjoy, won’t you?

When we last left our least favorite characters in The Phantom Creeps, they were languishing in an unmanned plane flying through fog at low altitude, yet we all knew damn well that there was no reason to get our hopes up. No explosion leading to a fiery, comet-like decent ending only with a satisfying slam into the cold hard earth was forthcoming, at least not this early in our 12-part serial. And indeed, PGR shakes G-Man Bob awake — a sure cure for any cracked skull — just in time for him to take control of the plane and thwart all our hopes and dreams. Er, I mean thwart disaster. Whatever, they’re alive and I’m disappointed, that’s all I know. 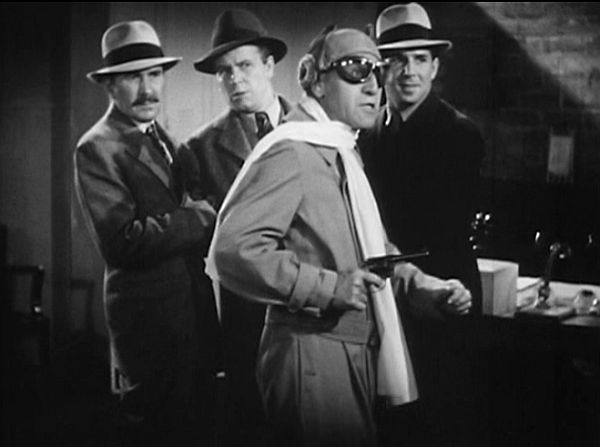 Meanwhile on the ground below, this is still going on. Damn hipsters, stinkin’ up the place with their goggles and fake moustaches and tweedy three-piece suits.

The plot quickly gets back on track once a couple of spy goons toss Toomey into a car and drive away from the airfield. G-Man Bob remembers he can fly an airplane. PGR has nothing to do now that she’s done shaking him, so Bob suggests she make herself useful and look around for the briefcase full of grenades that is standard issue on every airplane. 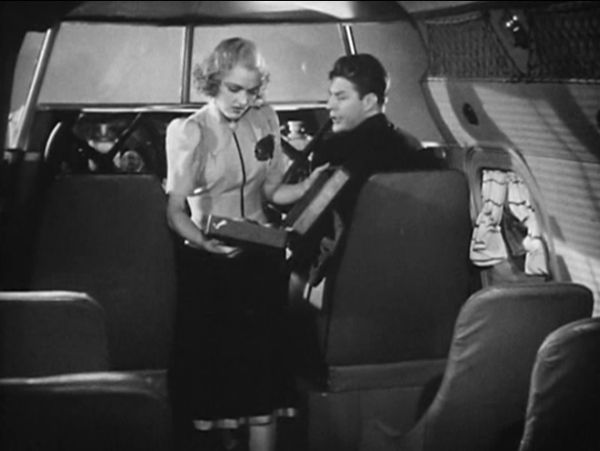 There it is, laying on the co-pilot’s seat right where it should be! Oh, airplane grenades, how often we take you for granted.

G-Man Bob sees the spy goons driving away on the road below and decides for once that he should try to stop them, so he instructs PGR to toss some of those grenades at the speeding car. When things start blowing all to shit around them, the spy guys are flummoxed; they had brought The Reeg along with them to avoid this exact situation! Surely Bob wouldn’t be trying to kill them if he knew Regis was in the car with them… but Regis Toomey knows better. 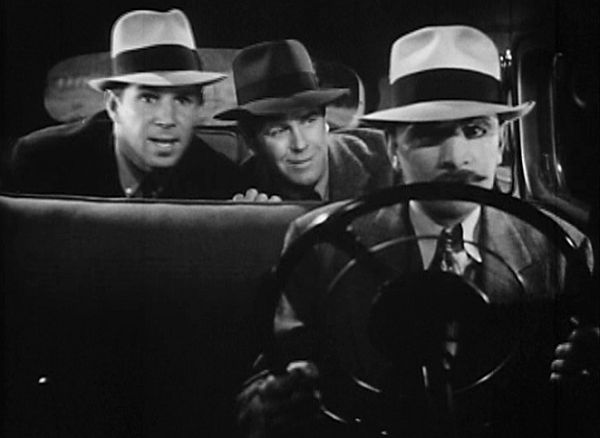 In shocking news, PGR turns out to have a super power: Long-distance aiming accuracy. She noncommittally tosses grenades out the airplane window — an airplane flying low but which must still be at least a few hundred yards above the car, mind you — and manages to hit near the car every time. Finally, a direct hit… 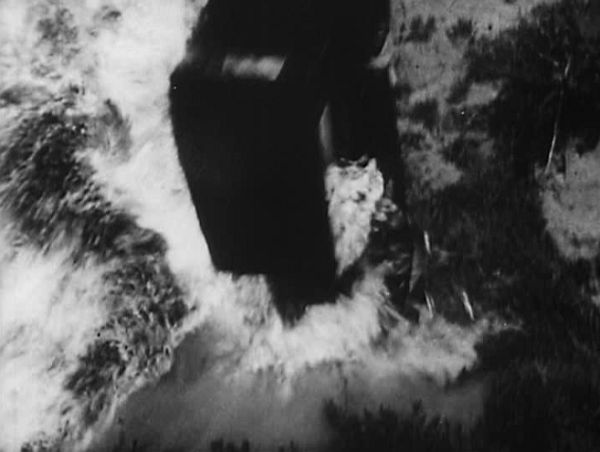 …and there goes Toomey again. But do not fret, my friends, because despite being in a car consumed with a conflagration surely summoned from the very bowels of Satan’s hellfurnace, The Regis walks away unscathed. 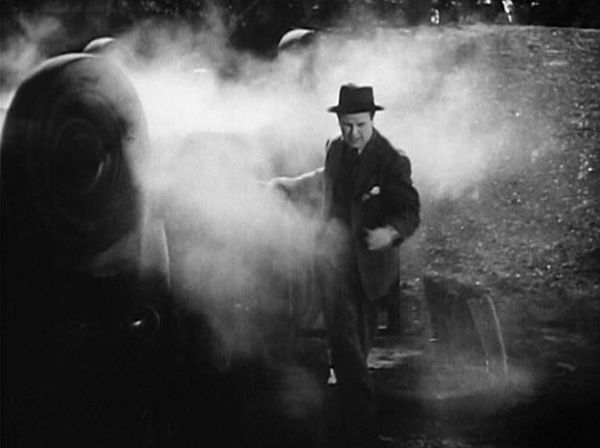 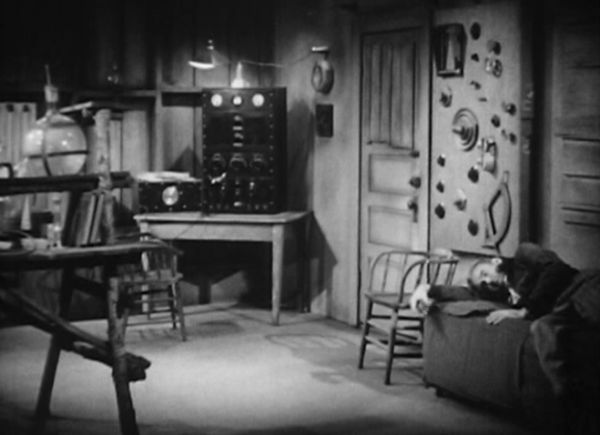 The spy ringleader, who has changed into a sensible suit by this time, takes a blindfolded Dr. Mallory out to an abandoned warehouse inhabited by a sleepy dude with a lovely assortment of doorknobs on display. Because when you’ve kidnapped a doctor, where else are you going to take him? Doorknob Man is tasked with holding Mallory hostage until he can flange the widget from the confrabulator matrix or, you know, whatever. He’s doing something with the meteorite and Doorknob Man is supposed to make sure that something actually happens.  As Mallory fiddles with the meteor, he tricks Doorknob Man into inhaling toxic fumes.  What a mean thing to do!  Boy, that meteorite sure can do a lot of neat stuff, though.

So what do you think was in the Pulp Fiction briefcase?  Grenades or a meteorite?

Doorknob Man is revived, left alone to keep an eye on that shifty Dr. Mallory, but gets tricked and knocked out again. Unfortunately for him, Dr. Zorka arrives with a fresh batch of ArachnoBlams here at the abandoned spy hideout that was once Acme Storage Co. 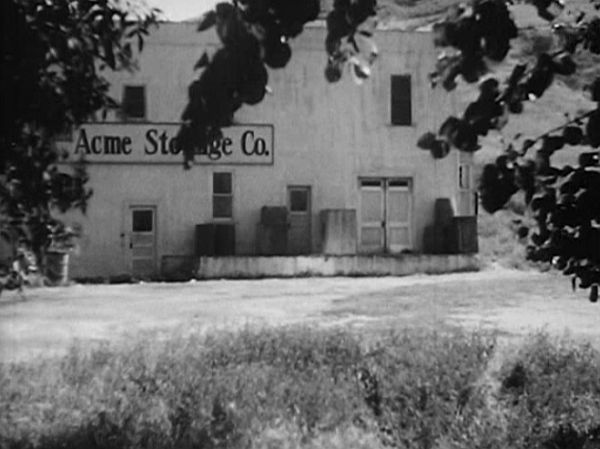 So Doorknob Man is already knocked out but Zorka ArachnoBlams him and makes him even more unconscious than he was before, which seems like a waste of a perfectly good six-legged googly-eyed fake spider that explodes, but I’m not the scientist here. Mallory is distracted by Doorknob Man sliding down the unconsciousness scale into death — death! — while an invisible Zorka steals the meteorite. A few moments later, Bob parachutes down (don’t ask) and rescues Mallory, who at this point is completely useless because he’s lost the meteorite and is partly responsible for the demise of our dear departed Doorknob Man. Bob finds a swanky car nearby and steals it to drive Mallory to a drug store (again, don’t ask). As he leaves, some spy goons give chase and, in an effort to lose them, Bob drives right into an oncoming train. 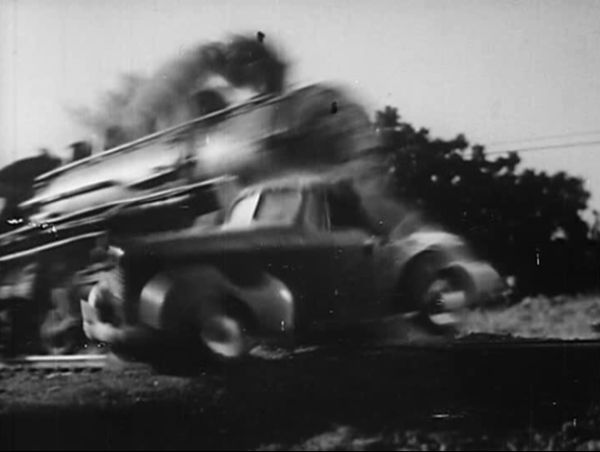