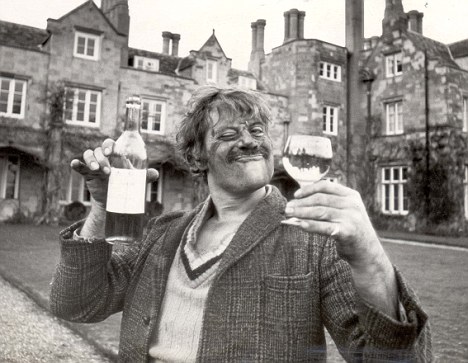 This picture has no bearing on anything (probably) (maybe) (I make no promises), I just thought it was hilarious. It’s Oliver Reed circa 1975, after he was banned from a pub for being a little too Oliver Reed-ey. (ETA: I originally said this was Alan Bates, and if you want to know why — and read the very funny original caption that went with this pic — check out comments!)

SBBN will be a little sparse this month, as August will be extremely busy. I have a lot of reviews for Spectrum coming up — as always, you can see them by clicking the links on the sidebar — plus a vacation at the end of the month. It’s the first real vacation I’ve had as an adult, which is why we have to actually buy a suitcase; the only luggage we had is the stuff my parents bought when I went to the International Science and Engineering Fair in 1988. That’s the last time I flew, too. It’s all very nerve wracking. I suspect I will not travel well.

This month, I will try to get some more Phantom Creeps recaps up, though I doubt much else will be posted. There won’t be a September schedule, either, so keep that in mind.

I do want to make a couple of brief announcements. First, I’m finishing up the sidebar blogroll, so if you don’t like the picture I’m using for you, let me know. I have several blogs to add, and if you want me to add your blog I will try, but the space is limited so I may have to forgo a few blogs I’d otherwise list. My apologies in advance.

And finally, I want to mention that a second SBBN blogathon is in the works! It’s a Camp & Cult Film Blogathon, an idea I have been playing around with for about a year. The official post and rules and such will be up after Labor Day, along with banners, which are undeniably the best part of any blogathon.

As always, drop me an email or comment here on the blog if you need me, and thanks for being patient.

REGIS TOOMEY WILL RETURN IN:
MOONRAKER.