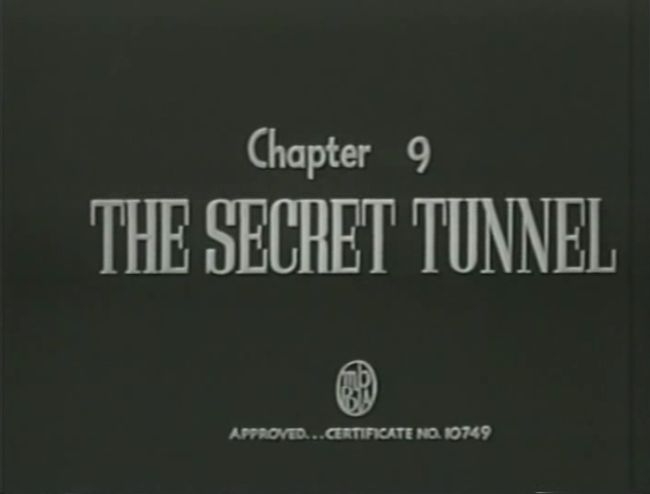 The Monster and the Ape #9
The Secret Tunnel

The story thus far: Robot salesman Ken, along with robot inventor Professor Arnold and his daughter Babs, are fighting against evil robot-coveting scientist Ernst, who has henchmen and a large gorilla named Thor. The possession of the robot and the wonder metal that powers him, Metalogen, has been alternating between the good but stupid guys and the evil but overly-concerned-with-feelings guys. Of note, our excitable narrator today calls the henchmen “hirelings,” which is adorable. When last we left our alleged heroes Ken and Babs, Ken was in the basement of a boarding house, being smooshed by two compactor walls, while Babs was locked in a room upstairs, not even trying to get out by kicking the door or picking the lock or anything.

For those of you playing The Monster and the Ape home game, this episode begins about 2:45:00 on the OV Guide version.

As the recap continues, Ken keeps fistfightin’ away, while Babs’ yells of “Help! Heee-elp!” make everyone laugh. Suddenly, police cars arrive, their sirens blaring. “That must be the cops!” says the boarding house owner. Wow, you are on the ball, sister.

The cops bust in and the henchmen run off, leaving the middle aged boarding house owner behind to get nabbed by the fuzz. What nice guys. Meanwhile, after seeing Ken nearly crushed and unconscious at the end of last episode, this is the closest he gets to being crushed today. 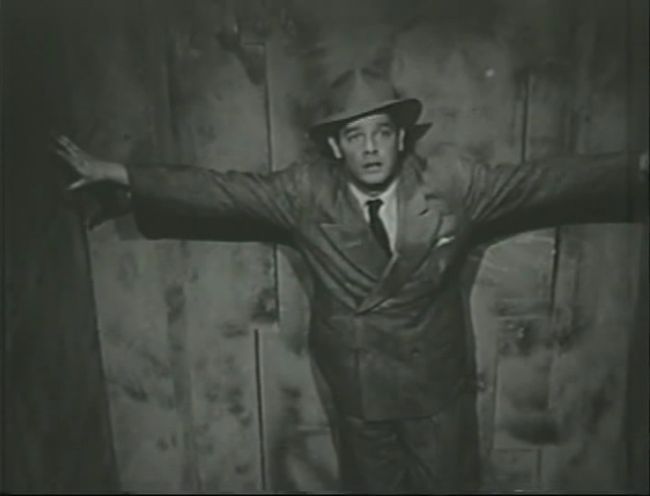 He’s a bossy bottom to boot, too, ordering the cops around and being snotty to them. It’s no wonder that, moments later, the cops just wander off without telling Babs or Ken. 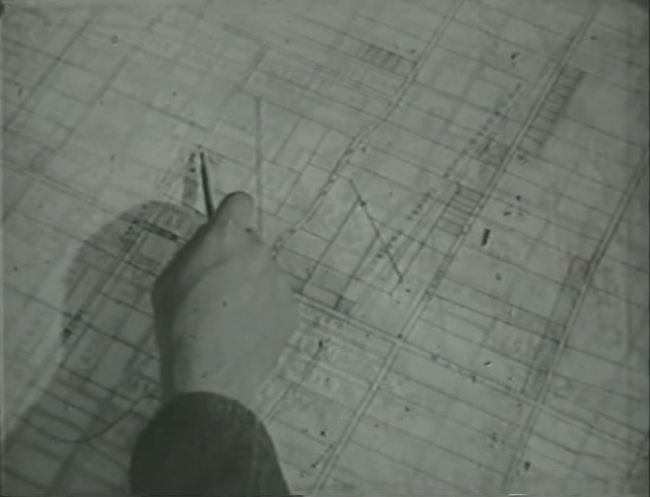 Upstairs, Ken and Babs find these plans. Plans for things! Big plans! No, they have no idea what they’re for, though they suspect they were left behind by henchmen.

They take the map back to the lab and read the instructions. It seems silly for Ernst to have written his plans down, but what do I know, I am not an evil scientist. Ken notes the map says to “triangulate to find point of contact” and none of them, not even the perfesser, know what that means, and are clearly too stupid to consult a dictionary, encyclopedia, or next-door neighbor for assistance. 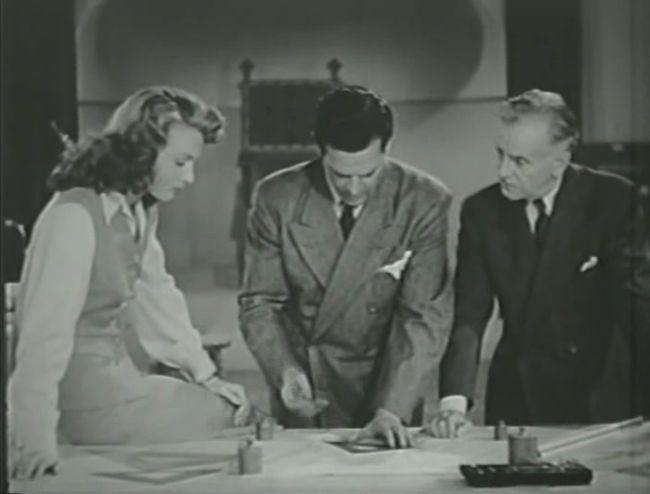 Carole is in the middle of botching her two lines a minimum of five times here, at one point pausing, clearly expecting a “Cut!” which never comes. Meanwhile, Ken finds a metal triangle and slaps it down on the map, while the professor, a man with an advanced degree, asks “What’s the triangle for?” Quality entertainment, ladies and gentlemen.

Knowing Ken has the map and won’t call the cops even when the cops are needed, and apparently also knowing that no one at Bainbridge Laboratories could possibly understand the concept of triangulation, Ernst assumes our alleged hero will simply visit the places marked on the map. The first marked location is the boarding house, but the second is our pasty henchman friend Flint’s own body shop. Ernst sends a second “hireling” to Flint’s, so they can both lay in wait for Ken. He arrives just on time, and begins browsing for clews. 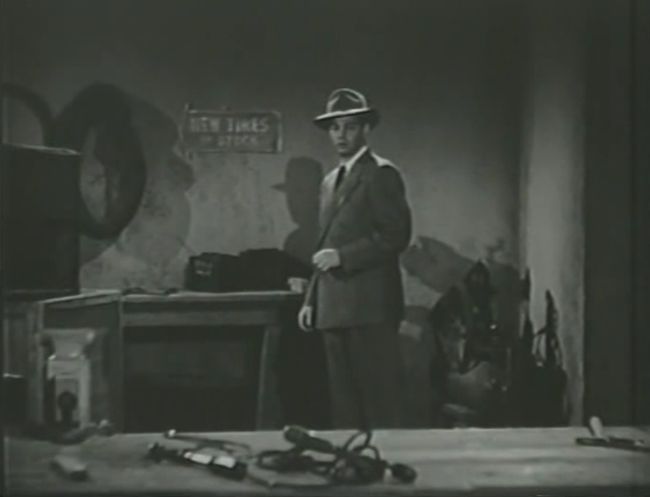 Just before he’s attacked, a pair of calipers land on the map in the exact way necessary to show him how to triangulate things (herp), thus revealing the “point of contact” mentioned on the map. 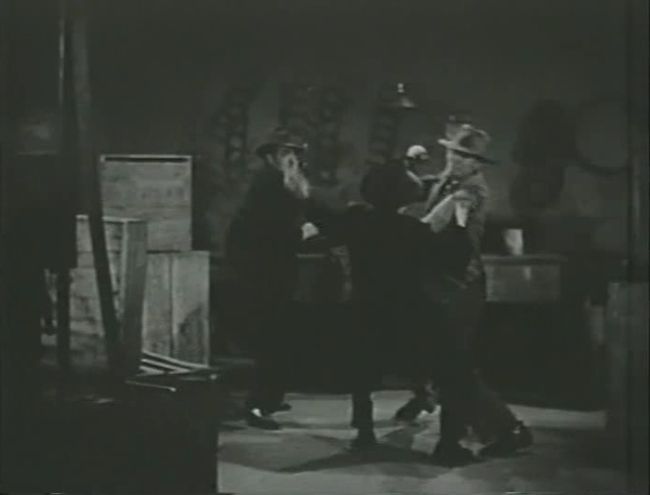 And there it is.

These two henchmen, Flint (the actor that looks like Hugh Herbert) and Blake (Eddie Parker) aren’t too bad at this fake fighting thing, and at one point, Blake throws what appears to be a carburetor at Ken, something I think we’d all like to see more of.

Shit gets a bit real, though, when Flint gets all territorial and starts to take out his past aggressions by knocking Ken out and then continuing to kick and punch him (“And that’s for my dad! And that’s for my football coach! And this is for the fucking fax machine!”). Blake has to stop him, telling him to go move Ken’s car from the front of the building. Blake trusses Ken up like a delicious Cornish game hen and shoves him in a corner while Flint brings the car in, then leaves it running. This will surely confuse the cops, who will assume Ken left his own car on, tied himself up, hopped over into the corner and laid there until dead. 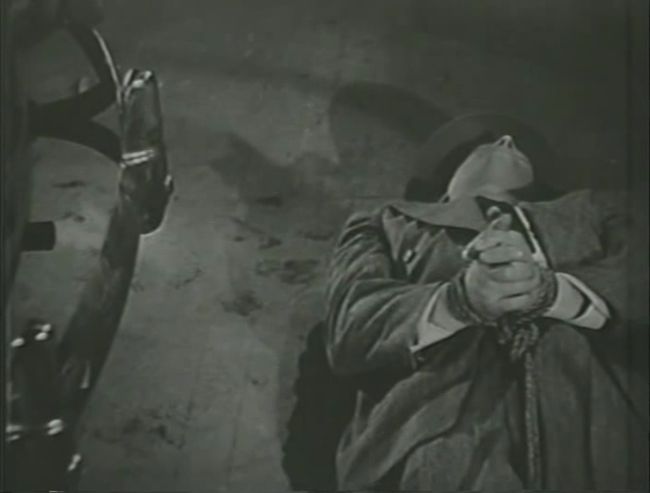 Woah woah hey now, I didn’t sign up for this kind of movie.

Ken comes to, and kills the car by putting his shoe over the exhaust (does that really work?) and buttscoots in a manly and dignified manner to the table, where a vice and a hacksaw are conveniently placed, and our actor doesn’t bother to even pretend to look elsewhere or do anything that might make this convincing. 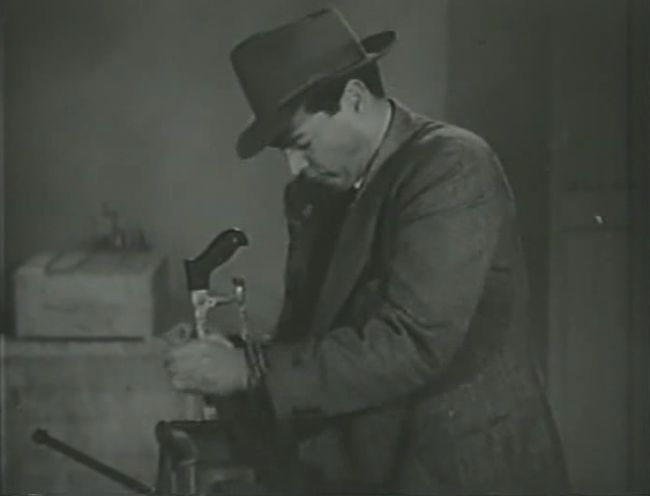 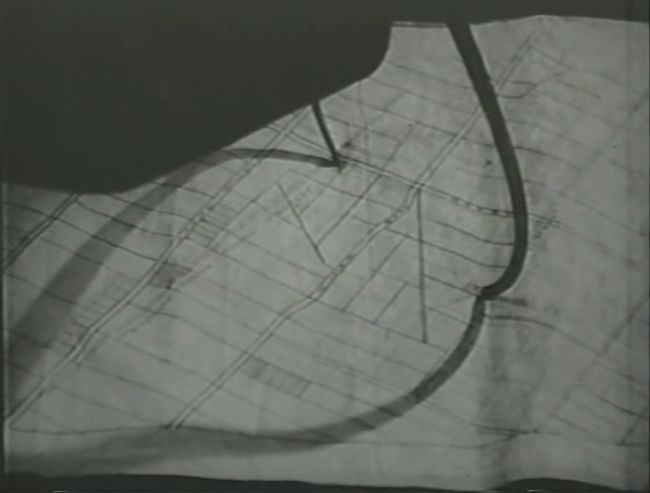 Ken, freed by a convenient hacksaw and enlightened by accidental calipers, busts out of the shop. Really, I wouldn’t do that to the business owned by the guy who just kicked you in the ribs a dozen times while you lay unconscious on his floor. 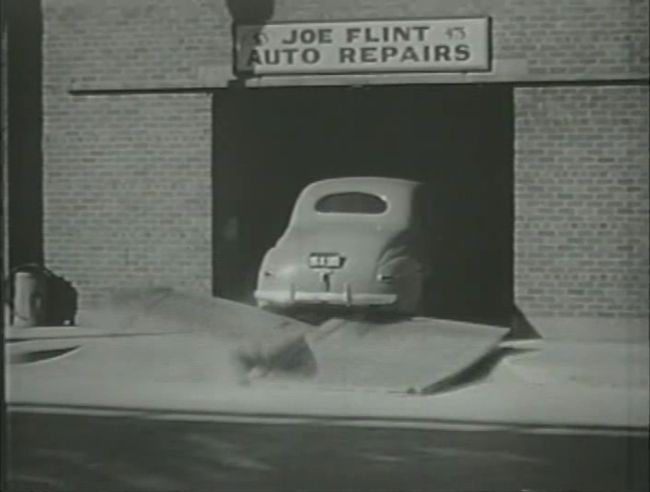 Back at the lab, Flash helps Prof. Arnold piece together a new invention, the details of which we are not privy to, likely because the scriptwriters hadn’t actually written that part yet. Prof. Arnold, who had been nice to Flash for half this serial, has been curt and snotty to him in the last two episodes, so I’m left to believe the sympathy shown the character early on was either a mistake or wishful thinking on my part. Also, when Flash helps the professor by cutting the board, he cuts furniture in half on accident because racism. Thanks, 1945, you’re swell. 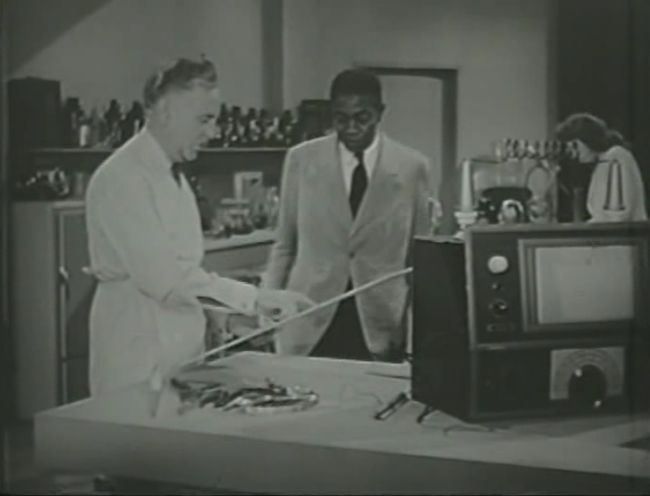 Now, the reason no one notices Flash’s mistake in progress is because Ken returns, announcing that he’s been a “dope” who didn’t know what “any five-year-old child” could have figured out. He then explains triangulation to the assembled who, because they are not five years old, have trouble understanding. 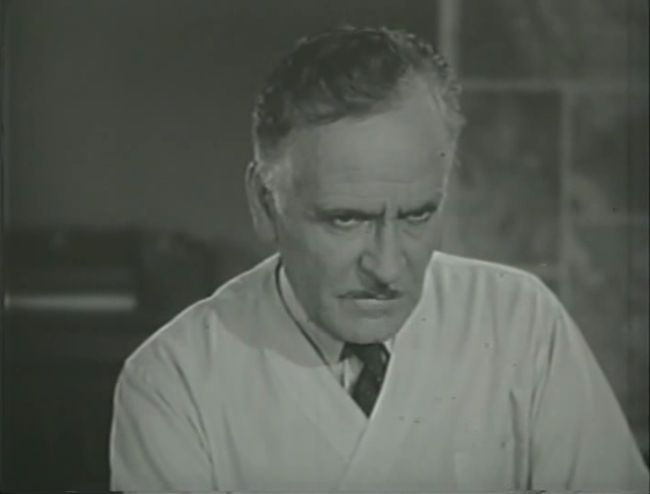 Prof. Arnold is about to call the police when Ken stops him. He wants to go to the third point on the map which he’s just discovered — which, by the way, is the paint factory closed for the duration that he was already at only two chapters ago — and he doesn’t want the cops to know. Arnold looks like he’s about to swat him with the telephone receiver, but doesn’t, so Ken and Flash head back to the paint factory.

Surprise! There’s a secret tunnel underneath the factory, and M-Bot is hauling rocks around, as one does in a tunnel. 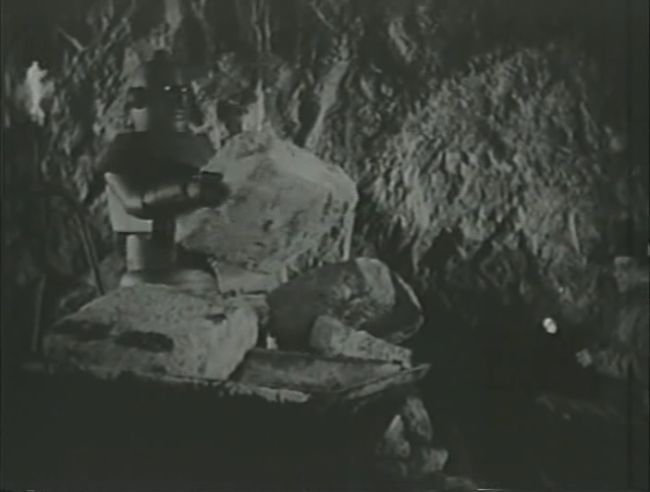 The three henchmen are about to blow more tunnel in the tunnel when they see Ken arrive. While chuckling, they have M-Bot smack Ken unconscious, leave the area, then they push down on that awesome box with a plunger on it that was standard issue for every movie serial of the era, and BLAMMO. Ken is knocked out, but of course he’s not, because this serial sucks. 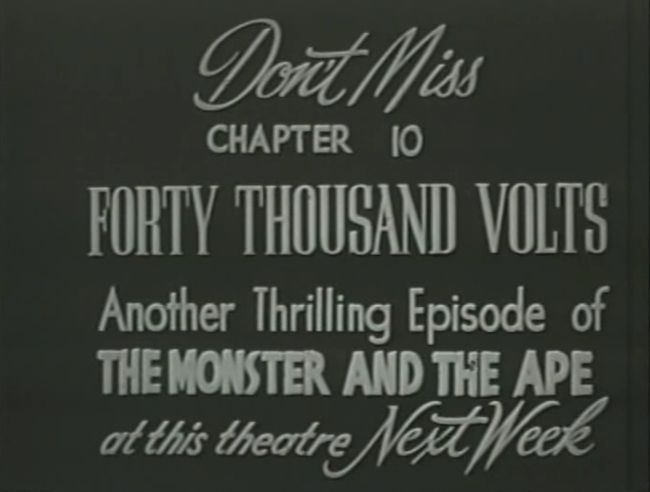 I’m scouring the internet for humorous tunnel-based puns as I type!