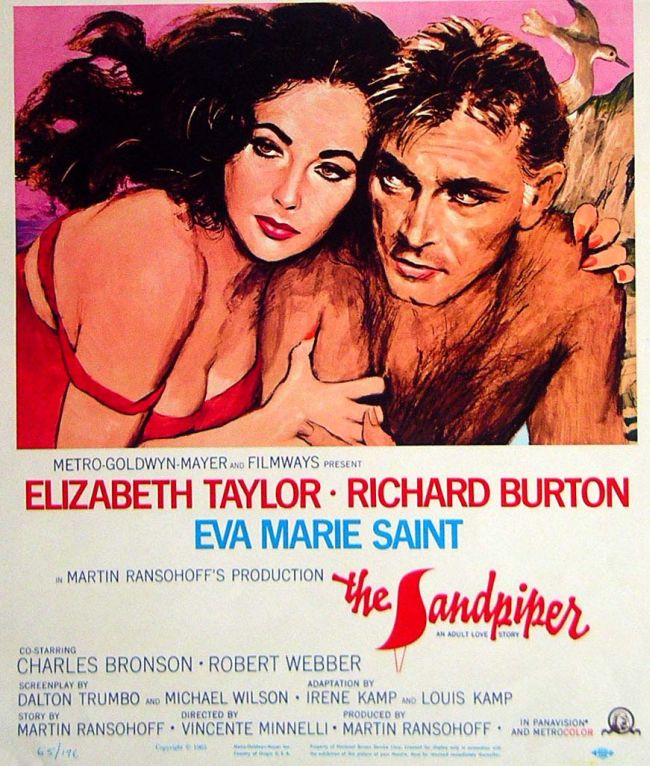 Here’s what I’ve been working on this week here at SBBN and elsewhere, as well as nifty bits of things from around the internets.

* The Sandpiper (1965) at Spectrum Culture for the Oeuvre series. It’s not the film’s fault that supporting actor Chuck Bronson became a cultural icon a few years after The Sandpiper, but you still have to laugh at him jabbing away at the nude sculpture, pretending to use Liz as a model; he just destroys the thing, obviously chipping wood away from the finished product, which sadly wasn’t very good to begin with — the nipples were crooked and it looked like Sally Kellerman more than Elizabeth Taylor, anyway. Your chuckles will devolve into full-blown guffaws when he growls, “You gonna seduce him?” to Liz, but that’s okay, you’ll cheer your head off when he punches the hell out of Burton, and if you’re sane, as Burton comes to, you’ll turn The Sandpiper off and go watch Death Wish again.

* U Want Me 2 Kill Him? on SBBN. Don’t let the terrible title, occasionally stylized as uwantme2killhim?, turn you off. This is a nice, tight little thriller, with an understated tone that works really well with the subject matter; as Mark (Jamie Blackley) gets further sucked into the strange tales he reads in chat rooms, everything is so downplayed that you wonder if there’s some actual truth there.

* The Art of the Steal at Spectrum Culture. Yet another film I liked better than most other critics. The Art of the Steal is hilarious and fun, even if Matt Dillon is truly awful in it. Dillon is very seriously working my last nerve lately; between him and Rob Lowe, we’re full up on mediocre aging 80s-era has-beens and cutting back on our consumption would do the culture a hell of a lot of good.

* Glickman (2013) at SBBN. My post on this HBO documentary just went live earlier today, so if you haven’t read it yet, go take a gander.

And a few things from around the web to keep you informed and delighted:

* Anton Dolin’s “The Strange Case of Russian Maverick Aleksei German” at Film Comment. A terrific article on the director, who passed away last year.

* “The Ghosts of Harlem’s Jazz Heritage” on The Jazz Trumpet Project by Thomas Heflin. Excellent pictures of former jazz-age locations in Harlem, along with fascinating history.

* A “Cinema Cinemas” retrospective and interview with Sterling Hayden from 1973: