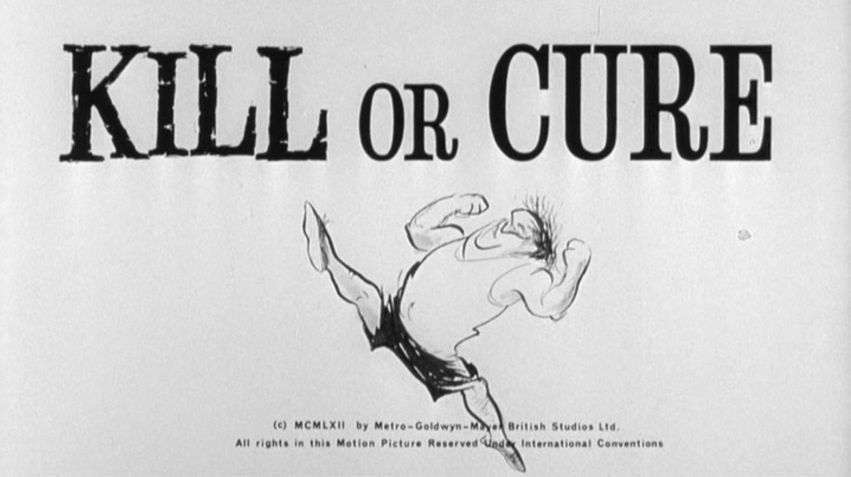 A series of cute pencil sketches and a light mambo-esque theme song in the opening credits hardly prepare us for the first frames of Kill or Cure (1962), a wacky British comedy-murder mystery starring the delightful Terry-Thomas. As the theme song (featuring someone who sounds an awful lot like Thurl Ravenscroft) fades out, a slow pan reveals that one Captain Barker-Rynde (Terry-Thomas) is a private investigator, the sneaky-sneaky-picture-takey kind of PI who specializes in divorces. Disgraceful! He receives a call from one Mrs. Clifford (Canadian singer and comedienne Anna Russell) to come visit her at the Green Glades estate, where she wishes to meet him to discuss a job. With the dreams of pounds sterling dancing in his head, he arrives at Green Glades, only to discover it’s not the posh vacation spot he had expected. 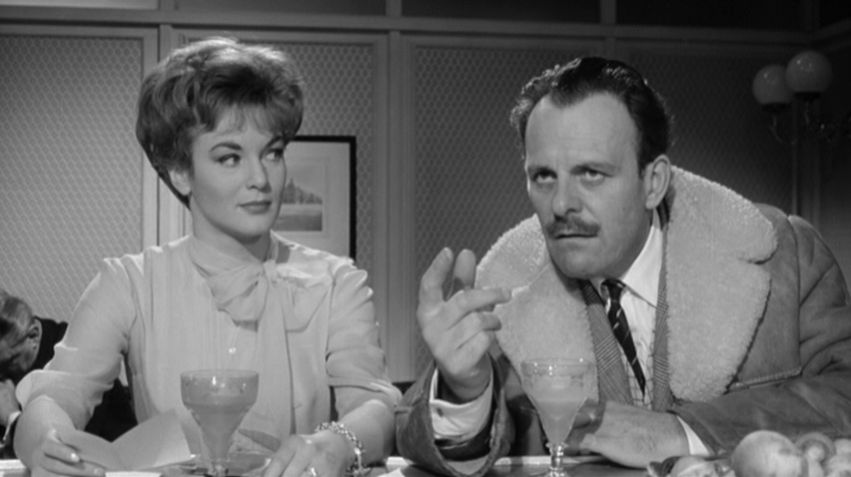 The moment Barker-Rynde discovers Green Glades is a health resort.

Before he gets a chance to talk to Mrs. Clifford, she’s poisoned… with ricin! Her assistant Frances (Moira Redmond) is also poisoned but survives, yet cannot give any clues to her employer’s death. An investigation by Detective Inspector Hook (Lionel Jeffries, in fine form) ensues, and a £2000 reward is announced for anyone who can help capture the murderer. Barker-Rynde once again sees an opportunity to make bank, while Green Glades health consultant Rumbelow (Eric Sykes) does as well; unfortunately, Rumbelow is certain that Barker-Rynde is the killer, and Detective Hook is starting to suspect the same. 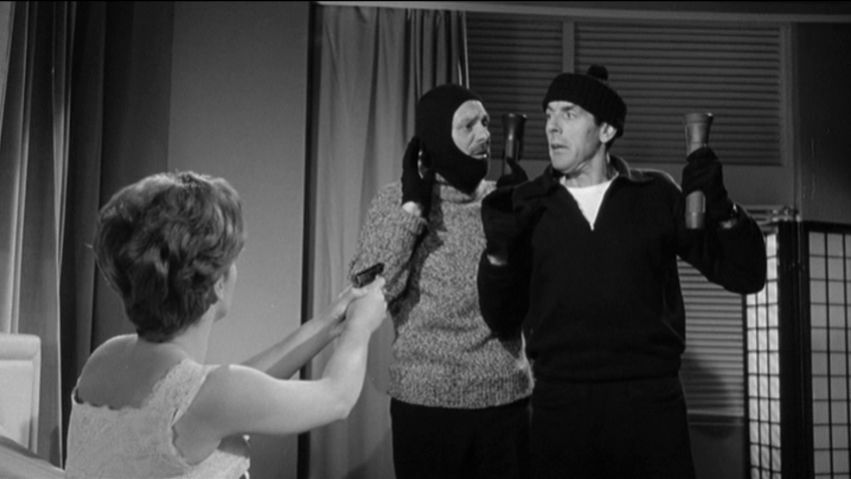 What Britmovie condemns Kill or Cure for is, at least to me, the movie’s saving grace: its emphasis on the murder mystery rather than overripe comedic elements so many other early-60s British comedies relied on. There are a few slightly saucy bits here and there — dunking some drawers into a pool, the implication of nudity, a hint that cute little dogs sometimes do their business in the bushes — but it’s mostly a very gentle, mild film, appealing and fun and as comfortable as an old cardigan on a cold winter day. 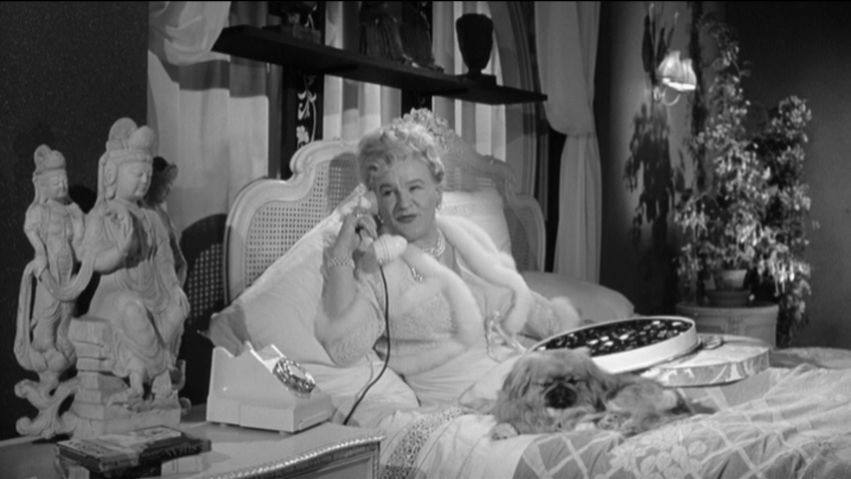 It’s impossible to talk about Kill or Cure without mentioning Horatio, Mrs. Clifford’s adorable Pekinese played by canine actor Mandy. She — or he, I’m unsure which — is adorable, perky, and a good sport. The supporting doggie lead is an enormous Great Dane named Junia, who was trained by Barbara Woodhouse. Junia went on to star in a couple of TV shows, including “The Avengers,” and was featured on the cover of Woodhouse’s best seller Almost Human.

But it’s Mandy who steals the show. Horatio features heavily in the solving of the mystery, and does so without giving a performance that looks like it was pieced together in the editing room. I’m reminded of a few reviews of old Mack Sennett shorts I’ve stumbled across, where critics have declared certain shorts to be good simply because of the absence of Teddy the Dog and Pepper the Cat. Rest assured, even the most stalwart of critter haters will find Kill or Cure charming, and the canine performances done well.

That’s to say nothing of the rest of the cast, who are all in fine form here. Redmond and Jeffries both give solid performances, and even Katya Douglas, consigned to a thankless role involving lingerie and pitchforks, has good scenes. 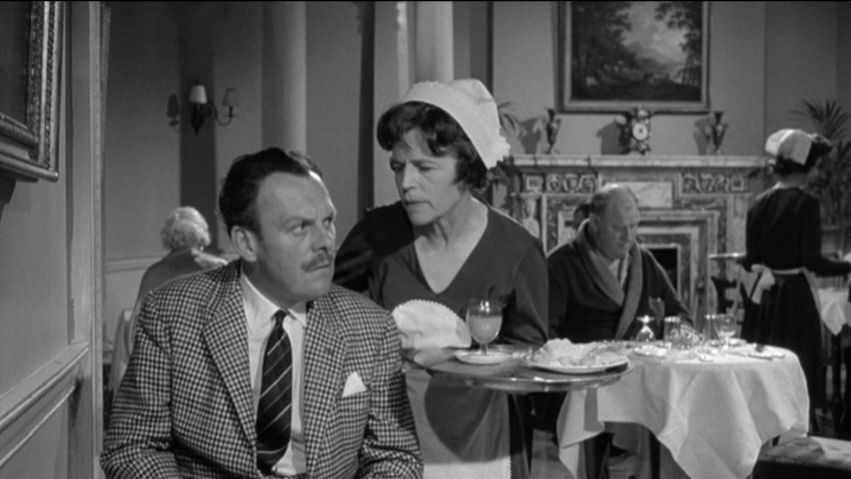 And Patricia Hayes of “Hancock’s Half Hour,” A Fish Called Wanda, Went the Day Well and a million other terrific roles, has a cameo.

Terry-Thomas is hilarious and understated, nothing like his broader characterizations seen later in the decade. After a lengthy career on stage, radio and eventually starring in a series of well-received films in the 1950s, Terry-Thomas was just on the cusp of breaking into American films when he began filming Kill or Cure. His U.S. roles were frequently smaller than those he enjoyed in his home country, sometimes just cameos (and never leads), and he found as much work on television as he did in film. Kill or Cure is one of if not the last film he starred in, and he does an impeccable job carrying the film, making it as much a bittersweet what-if about his career as it is a gentle comedy.