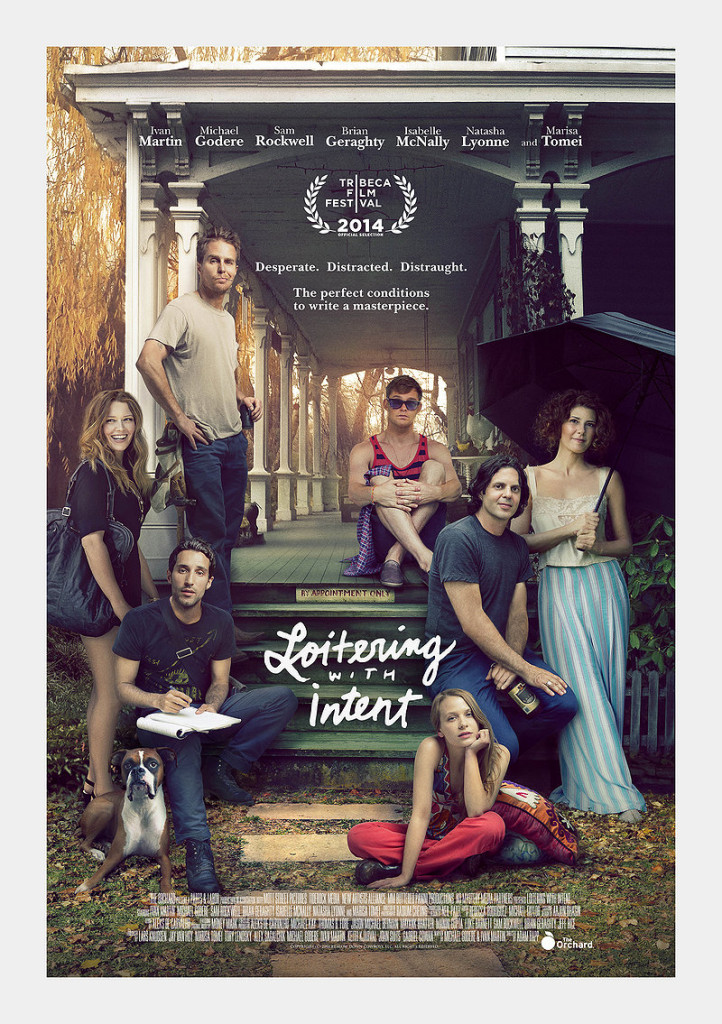 “What do writers do?” Dominic (Michael Godere) asks his friend Raphael (Iván Martín). “They go to the country. We’ll go to the country.” The chance to write and star in their own low-budget indie has just magically fallen into Dom’s and Raph’s laps, and the pair scramble to get a script together in 10 days in Adam Rapp’s gentle comedy Loitering With Intent. After a brainstorming session or two — a few of their ideas are good, a couple hilariously awful — the tranquility at the beautiful home of Dom’s sister Gigi (Marisa Tomei) dissolves, interrupted first by the arrival of Gigi’s friend Ava (Isabelle McNally). Soon, Gigi herself arrives, drunk off her ass and in obvious trouble, with news that her war veteran boyfriend Wayne (Sam Rockwell) has gone just a touch crazier than usual. By the time Wayne reappears with his brother, the annoying surfer bro Devan (Brian Geraghty), Raphael has thrown himself into the drama around him, while Dom sequesters himself, refusing to give up on what he believes is his last big chance at success.

Loitering With Intent comes pre-packaged with a comfortable and familiar plot. It features the requisite whimsy and heartfelt emotion of a low-budget indie, plus plenty pf introspection and meta references and a handful of 30- and 40-something white guys who realize they finally need to grow up. But there’s something else here, too: honest and messy lives that no one is really trying to fix. Characters are allowed to be unexceptional, their quirks so common that you can’t help but relate to them. Best of all, their dialogue is real, sometimes even clumsy, and with this refreshing lack of pretension and overworked quotables comes a chance for the audience to personally connect with the group.

That’s not to say the film eschews all cliché, because it most certainly does not. Every scene is packed with great food, gorgeous and sparkly outdoor lighting, beautiful hair, trendy clothing, and that one big, unasked question of so many low-budget films: how can so many unemployed people afford all this? But Loitering With Intent recognizes the tropes for what they are and plays them down, and is successful thanks to fine cinematography of Radium Cheung, as well as the strong performances of the cast, especially Tomei and Rockwell.

Tomei was never a bad actress, but the last few years have seen her become one of the best, most underrated character actresses of our time, and her performance in Loitering With Intent is a fine example. Exuberant and charming but never vapid, she’s in complete control of her character. What in almost any other actress’ hands would be a pleasant but typical role, Tomei turns into an interesting woman with depth, not just the wacky sister but a fully fleshed-out character whose every movement hints at a rich backstory. Rockwell, too, gives a surprisingly understated turn; there is more conflict and emotion in just one look on Wayne’s face than there is in the entire rest of the film.

Make no mistake: that’s entirely intentional. Loitering With Intent knows that Dom and Raph have the same dreams the rest of us do, and that sometimes, like it or not, our lives are stereotypical, and that’s okay. And even when dealing with difficult topics, the conflicts and moments of testosterone-fueled head-butting, the film is so good natured, accepting and tolerant that it becomes almost aspirational. There may be a lot that we’ve seen before in Loitering With Intent, but there’s still a world of pleasure in the details.