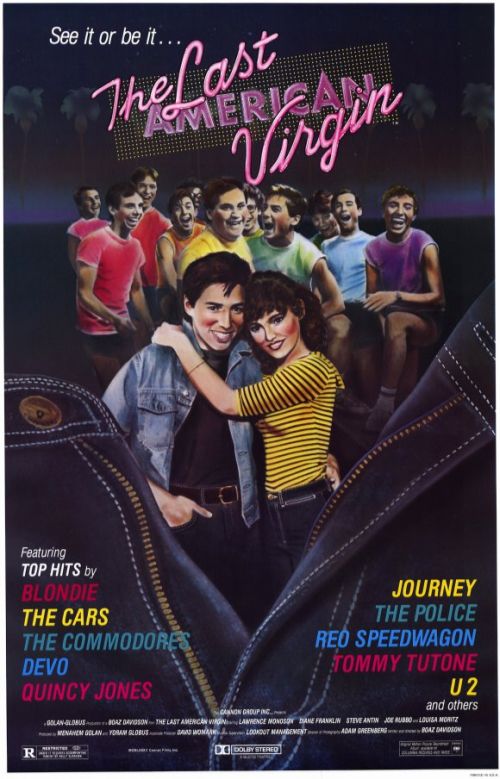 Dismissed by many as just another crass teenage sex romp not-so-secretly marketed to pervs a generation older than the stars on the screen, The Last American Virgin (1982), in truth, doesn’t disabuse anyone of that notion during its first half. Opening with our young kinda-hero Gary (Lawrence Monoson) struggling to find time to hang with friends despite a busy pizza delivery job and being saddled with a large pink station wagon for a ride, Last American Virgin feels like it’s about to turn into Caddyshack II: The Puberty Years at any moment. Gary’s core group of friends include Rick (Steve Antin), the hot stud who beds pretty much any girl he meets, and David (Joe Rubbo), a big guy who still scores more often than Gary ever has, which is never.

At a local hangout, Gary spies the cute new girl Karen (Diane Franklin) and her friend Rose (Kimmy Robertson). He falls for Karen immediately and plots to connect with her, while at the same time picking up other girls with Rick and David and hoping to score with them, too. His early encounter with Millie (Winifred Freedman), the chubby girl in a trio of young ladies looking to party, is alternately funny and offensive, and, not coincidentally, the last time we see Gary actually trying to get laid.

From the moment his parents walk in on him struggling to remove a disinterested Millie’s bra, Gary lets himself get talked into romantic situations by David and Rick, but he is never really engaged. His obsession with the distant Karen is so intense that it’s uncomfortable to watch. He can’t stop gaping and staring, he can’t control his emotions, and that he doesn’t end up dead through misplaced teenaged love-angst or drunk driving within the first half of the film is a surprise.

Critics and audience members alike have noted that the film seems sexist, in part because we never get to know Karen. She’s a one-dimensional character without question, but let’s be real: Gary doesn’t know her, either. From the first meet cute where he pretends to not be able to remember her name and on through the rest of the film, it’s clear that he only knows what she looks like, and has absolutely no idea about her personality, her character, her life, anything. Last American Virgin reminds us of this by going for lengthy periods of time without bringing her into any scenes, and when we do return to her, it’s with close-ups of her pretty but blank face.

Last American Virgin gets a lot about high school life right, at least as far as I’m concerned. That said, it’s a little depressing to realize my own small-town Kansas high school was so behind the times that what’s portrayed here in the film in 1982 looks like what I experienced in 1990, right down to the same fashions — I owned a polka-dot shirt exactly like the token nerd’s shirt, though I’m pleased to announce that I never wore a pocket protector with it.

Complications arise in Last American Virgin thanks to Karen falling for the hot, sexually promiscuous Rick, straining his friendship with Gary. But it’s also notable that pretty much every problem Gary and his friends have is because they don’t realize women are human beings with minds of their own and free will and other really inconvenient stuff like that. Every awkward situation Gary ends up in is thanks to women, which is par for the course for this sort of sex-based Bildungsroman, but the women aren’t acting inappropriately at all, and there are none of the usual follow-up bitchfests where the guys grouse that if it hadn’t been for those stupid women, they would have succeeded.

Instead, their lack of understanding that women are human beings is the uncomfortable underlying motivator for all of the boy’s actions. The scene with Millie early in the film goes on uncomfortably long, for instance, and if you’re not feeling really sorry for her by the time she’s looking scared and eating a bowl of chips in hopes of driving Gary away, then you’re not paying attention. Rose is set up to be the stereotypical girl Gary is meant to discover was really meant for him all along, but instead she’s fun and quirky and sexually independent, qualities that seem to increase Gary’s morose demeanor by an order of magnitude.

When people talk about The Last American Virgin, they talk about the ending, which seems to really upset a lot of men in the exact way sad endings in so-called chick flicks upset women. In other words, it’s a sentimental sadness in a movie that was designed down to the last molecule to appeal to the heterosexual male audience the same way “chick flicks” appeal to heterosexual women, but it seems the kind of criticism those female-oriented romantic comedies get never applies to Last American Virgin.

What’s interesting about the pass it gets for being a heart-stomper is that Last American Virgin seems, at least here in the far-off distance, to be more about inappropriate “white knight” male entitlement in our society than about young teen love, and how women get bounced around and used in our culture. A late scene involving an abortion clinic shows one of the female characters in a very vulnerable place, for instance, and critics have lashed out at this scene for being exploitative.

But I don’t think that’s exploitation. I think that scene very clearly aligns the self-appointed male hero as being just as predatory as the greedy, judgmental abortion clinic staff, but predatory in a socially acceptable way. Neither the nasty clinic worker nor the white knight in question know the girl in that office, but they think they do, thanks to outward appearances. They both expect something — love and gratitude for him, money for the clinic — and feel they are owed it because of what this girl has done in her own life and through her own choices.

On top of all that, Gary is a loser, ostensibly because he’s a virgin, but also in part because he gets himself bounced around and used in the same way the women in the film do. There is a contempt for him from his friends and classmates while we in the audience are being asked to sympathize with his plight, and once you realize that his character is feminized (for want of a better word), an interesting, albeit upsetting, subtext emerges.

A Golan-Globus Production, The Last American Virgin was a remake of the film Lemon Popsicle, released in Israel in 1978 and also directed by Boaz Davidson. Lemon Popsicle had been a huge hit and was clearly relying on the performance of movies like Grease, and in turn, The Last American Virgin used 1950s styles in their poster and publicity photos, though the film is hardly comparable to Grease at all. Last American Virgin did well domestically and features a soundtrack people are still talking about. It’s mostly Top 40 New Wave and Alternative Pop — The Police, The Cars, Blondie — but there’s some Gleaming Spires and Waitresses and Plimsouls in there, which makes the Journey easier to take.

Olive Films releases The Last American Virgin on DVD and Blu-ray today, August 25, 2015. This is a bare-bones Blu-ray with only chapters available — there are no special features or subtitles. The image is clear with just enough grain left to maintain the warm ‘n’ fuzzy nostalgic look of the original, and the audio is very good, with a nice mix on the music that keeps it up front without overwhelming dialogue. For more tech spex see Blu-ray.com here. The featured image is also from Blu-ray.com.