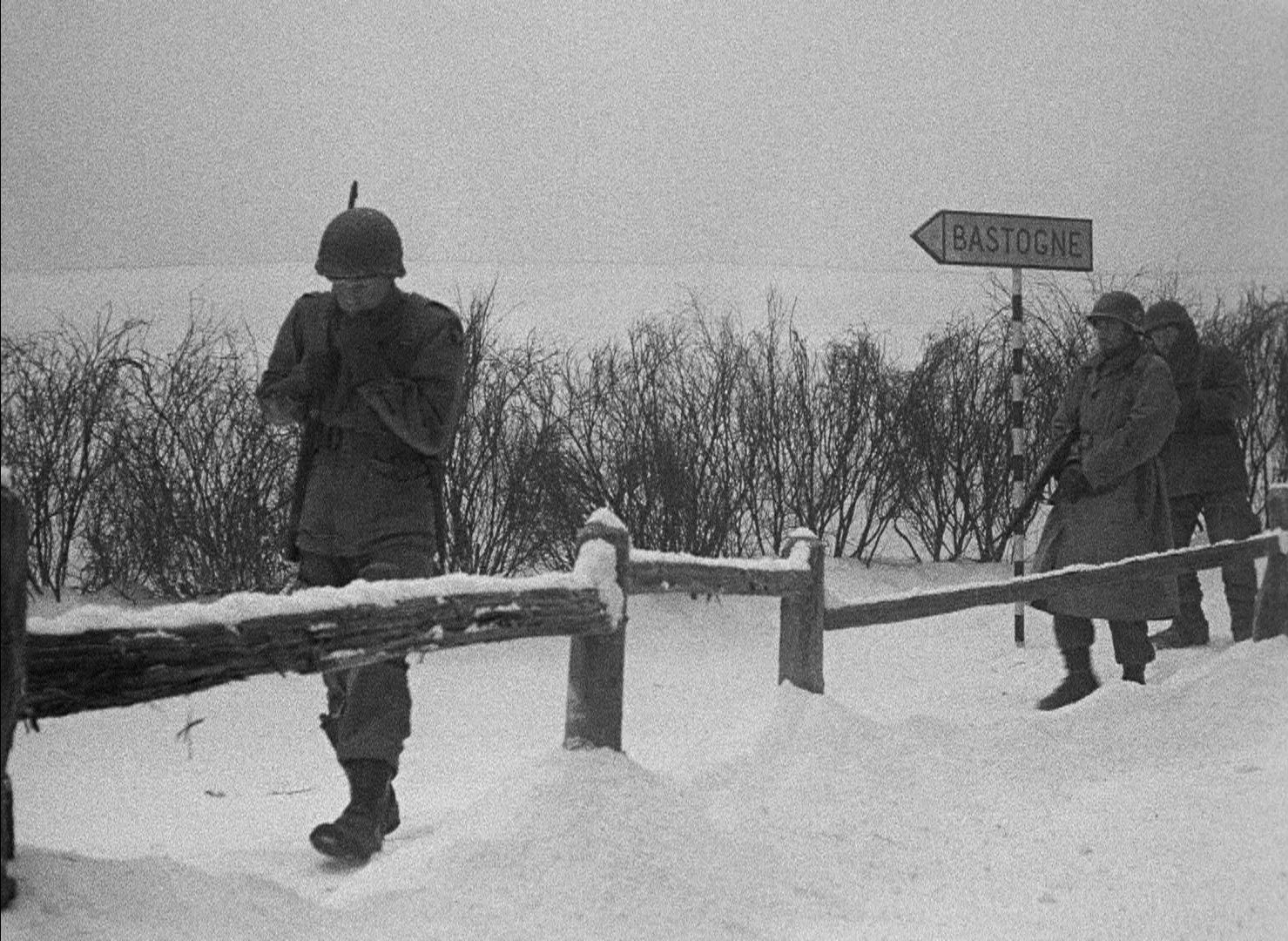 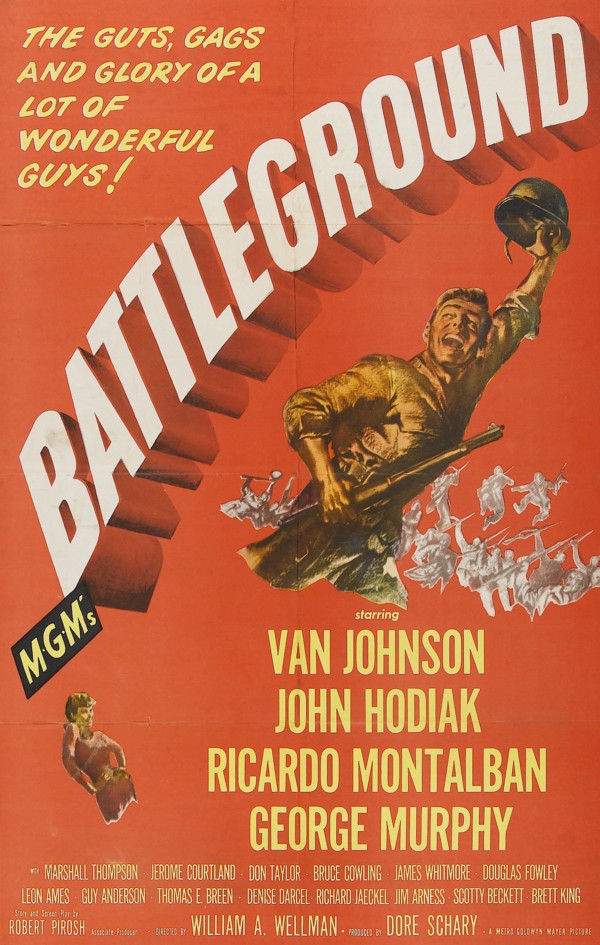 William Wellman’s Oscar-winning Battleground (1949) opens with two fresh-faced young buddies about to be separated thanks to new assignments during the Battle of the Bulge. Layton (Marshall Thompson), idealistic and excited, has been assigned to the famous 101st Airborne Division, but his idealism is soon tested as he finds his fellow tentmates unwilling to even let him sleep on a cot. The college-educated Jarvess (John Hodiak) is seconds away from beaning country boy Abner (Jerome Courtland), who can’t stop himself from being stupid. Pop (George Murphy) is waiting forever for the discharge that should have come in weeks ago, while Kipp (Douglas Fowley) keeps clicking his false teeth and needling everyone, especially Holley (Van Johnson), just back from being wounded and derided by half his pals as either a wimp or a malingerer. 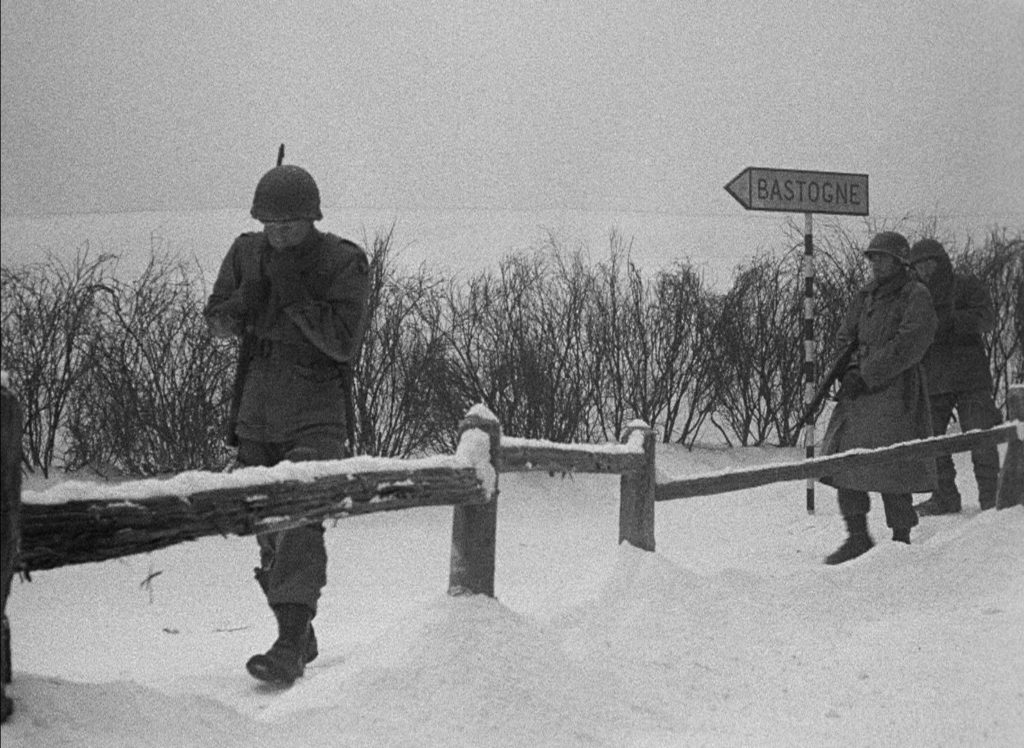 Warner Archive has just released Battleground in a much-needed MOD Blu-ray, with two inspired shorts as bonus: the Tex Avery “Little Rural Riding Hood” and the MGM Pete Smith Specialty “Let’s Cogitate,” both included as a little nod to Abner’s and Jarvess’ terse relationship. This print is a restoration (the original nitrate was lost in the infamous 1978 fire) and it looks just fantastic, and even in the scenes where a lower-quality print had to be used the grain is not particularly intrusive.

This print may be gorgeous, but Battleground is grimy. You won’t find a scrubbed and pressed Errol Flynn here, or even a lengthy sequence set in a lovely pub with lots of pretty girls surrounding the soldiers on leave. This is a film that is down in the dirt and the snow, eye-level with the foxholes (and, presumably, latrines) as they’re being dug.  Everyone is caked in dirt and lord knows what else — in Kinnie’s (James Whitmore’s) case, it’s post-chewed tobacco and saliva. They’re underfed, under-informed, used and abused and forced to wear boots that don’t fit while marching about a thousand miles a day.

This may sound strange to say to the uninitiated, but it’s the filth that makes Battleground so great. These guys are devoted to each other and can barely stand each other. They’re individuals thrust into such extreme circumstances that you can hardly tell them apart from each other by the second or third day in Bastogne, or wherever the hell it is they’ve ended up; they usually have no idea. It was revelatory in 1949 — my good pal Bosley Crowther, in an uncharacteristic rave, called it “the best of the World War II pictures that have yet been made in Hollywood” — and remains powerful even today. 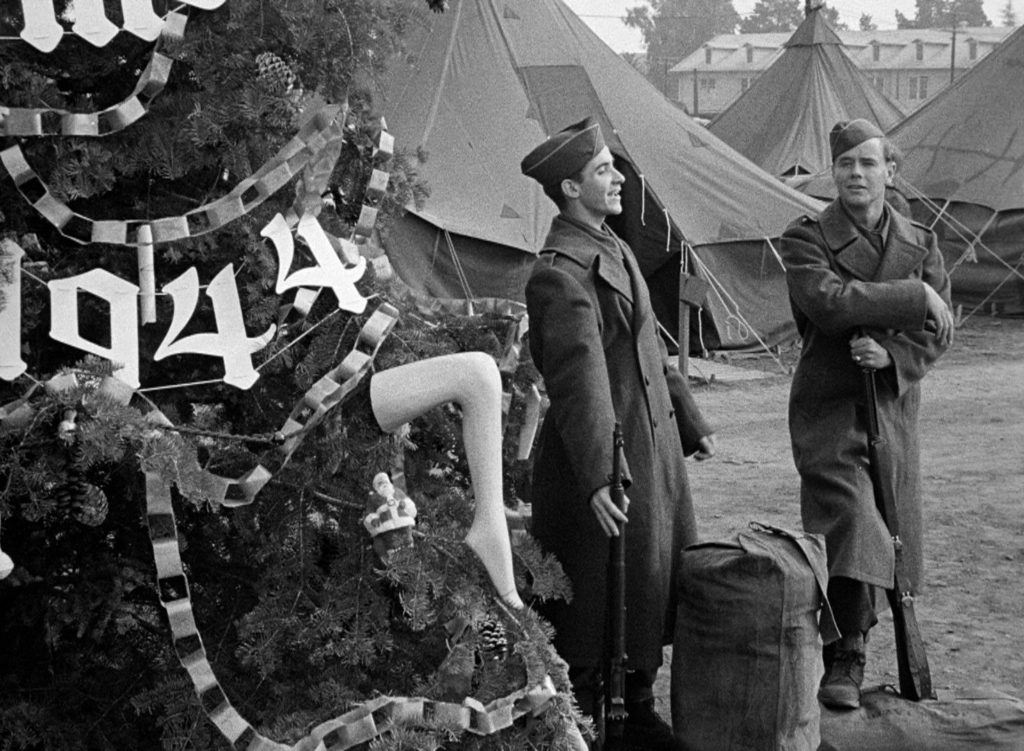 One of the two pals in the opening scene is Scotty Beckett (above center), one of my favorite child actors, but who came to one of the most notorious bad endings of any Hollywood stars from the golden age.  Battleground came out just as Beckett’s wild lifestyle started to catch up with him, and it became one of his final major performances. As a teen, he’d spent plenty of nights partying with the likes of Elizabeth Taylor and Roddy MacDowell, but in 1948, he was picked up by the police for drunk driving. He tried to get his life back on track, or at least that’s what he told the trade papers, and was eventually cast as Winky in the Rocky Jones movie series (1954). As his eventual replacement Jimmy Lydon said, Scotty “was a very bad young man” and a sore loser who tried to cheat some gangsters out of money; that and the drinking caused him to get arrested again in 1954, and he lost his last good acting job.

By 1959, Scotty was permanently disabled after a drunk driving accident. More arrests and drinking followed, and after several of his more self-destructive periods, he would often attempt suicide. He may have finally succeeded in 1968, though the coroner was never officially sure. His former co-star Robert Blake said in an interview that Beckett, along with a lot of other child stars, was just “worn out and defeated by life.” [1] 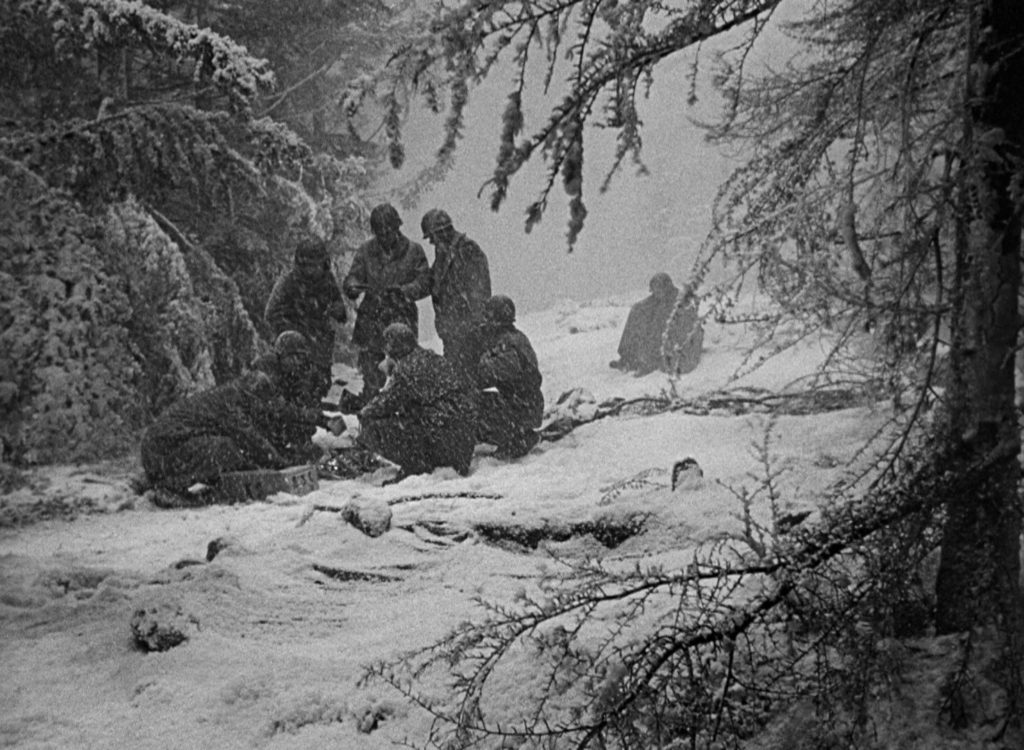 It’s ironic then that he would play such a chipper, charming young soldier, a guy with remarkably few worries considering where he was and why he was there. But just as in life, there are no guarantees as to who will live and who will die, though you can make a few decent predictions by comparing the box office power of the co-stars. When the deaths come, they tend to be on the ironic side, a pathos-milking maneuver that doesn’t jibe with the rest of the film, but was probably necessary in 1949. Battleground at least has the good sense to prevent the characters from commenting upon the irony — well, most of the time — and when a soldier’s irritating catchphrase becomes a bittersweet memory, there are no quiet smiles in the background to reassure the audience that this was intentional. 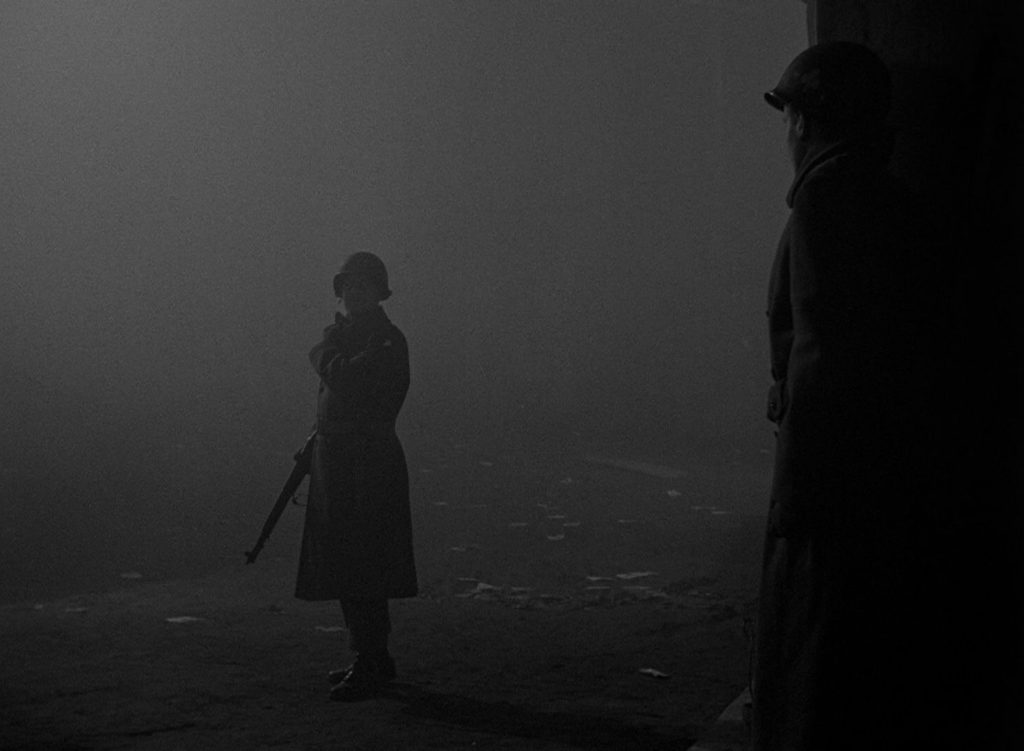 The script, which would go on to win an Academy Award, was based on screenwriter Robert Pirosh’s own experiences in the war. Also included were bits of actual events, most notably the famous “Nuts!” incident, and the fun phrase “take a flying leap at a rolling doughnut,” the origin of which seems to have confounded people for some time. Most trace it back to Kurt Vonnegut’s 1976 novel Slapstick, though his version replaces “flying leap” with “flying fuck,” turning it into a fine phrase which rolls nicely off the tongue. American servicemen in WWII apparently knew that quite well, as Paul E. Carrigan of The Fighting Weathermen[2] reports using the phrase in WWII — and that would be the Vonnegut version, not the Battleground version which, at least to my ears, sounds as though it was originally the one with the f-bomb (no pun), edited for mass civilian consumption but included to give veterans in the audience a little chuckle.

Battleground was a huge success, the biggest MGM film in over five years. It was nominated for several Oscars and took home two, as well as plenty of other awards, but it wasn’t just a critical darling: Battleground is one hella entertaining film. The performances are fantastic, even from the background extras, among whom you’re gonna see a lot of faces you recognize, like Jerry Paris, Tommy Noonan, Bill Irwin, Ian MacDonald and a good dozen more.

Battleground is out now on MOD Blu-ray from Warner Archive. There’s a lot to say about Battleground and you’re gonna want to read more, and here are two places to start: the (sadly now-defunct) Goatdog’s page, and W.B. Kelso’s Schary’s Folly Anything But.
—
Sources:
[1] I Talked with a Zombie by Tom Weaver, Suicide in the Entertainment Industry by David K. Frasier, Blood Cold by Dennis McDougal and Mary Murphy, and The Hollywood Scandal Almanac by Jerry Roberts.
[2] The Flying, Fighting Weathermen of Patrol Wing Four (PDF).
All screenshots are from the original Blu-ray. While they accurately represent the quality of the film, some compression of the image may have occurred when formatting these screenshots for this article.