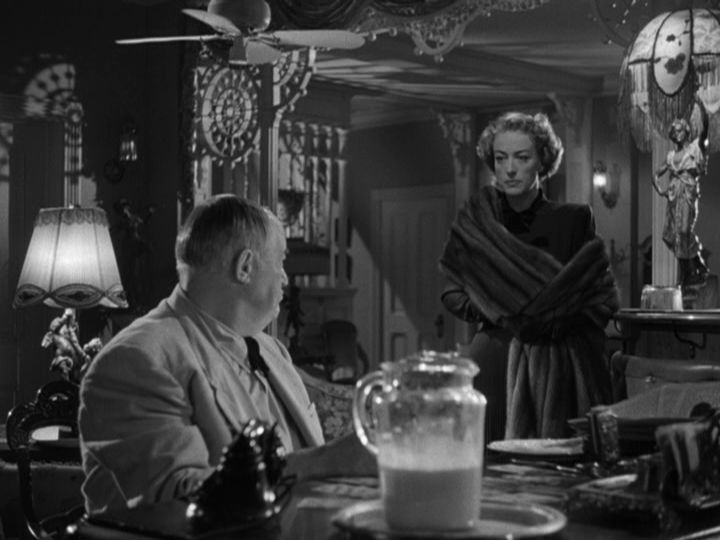 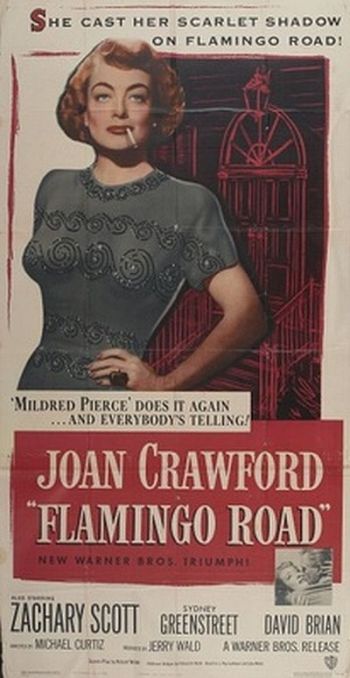 It’s a one-two punch of Joan Crawford tonight here on SBBN, and up next is another Warner Archive MOD DVD release of a formerly out-of-print movie: Flamingo Road (1949).

Lane Bellamy (Joan Crawford) is a hoochie dancer at a sketchy traveling carnival who decides that she’s finally had enough of one-night stands and being chased by the carnival owner’s creditors. She sets up a tent on the outskirts of Boldon City, and fledgling deputy Fielding Carlisle (Zachary Scott) stumbles across her while trying to serve a summons. Instead, he takes her out for dinner, helps her get a decent job, and falls for her. Hard. But Carlisle’s boss, Sheriff Titus Semple (Sydney Greenstreet), has plans to use Carlisle as a political pawn, and he doesn’t want his golden boy involved with a common tramp. He convinces Carlisle to marry the rich girl he’s half-heartedly been courting (Virginia Huston) and frames Lane on a prostitution charge to get her out of town. When she gets out of the clink, she resolves to make her way to Flamingo Road, the swanky area of Boldon City where the rich folks live. 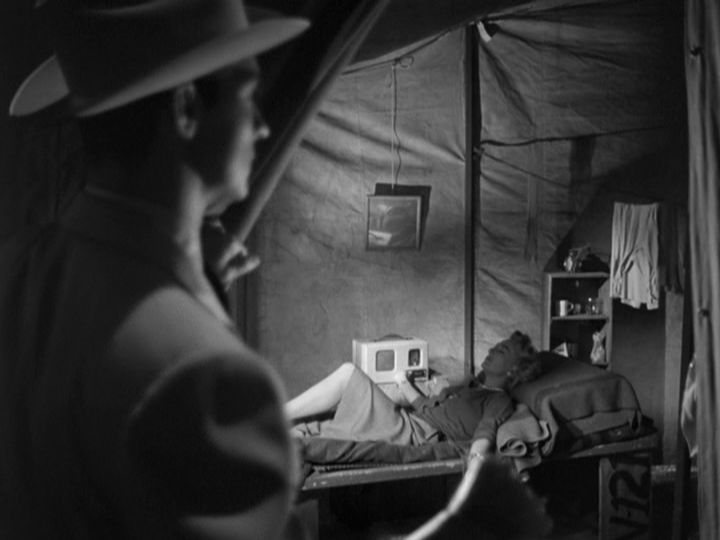 And somehow she actually gets there, despite immediately going to work for Lute Mae (Gladys George), a local madam. Her brothel hosts plenty of parties for state politicians, and handsome Dan Reynolds (David Brian) is a frequent customer. He’s taken with Lane and eventually marries her, and decides to clean up his act, at least a little. Unfortunately, the loathsome Sheriff Semple has other ideas. 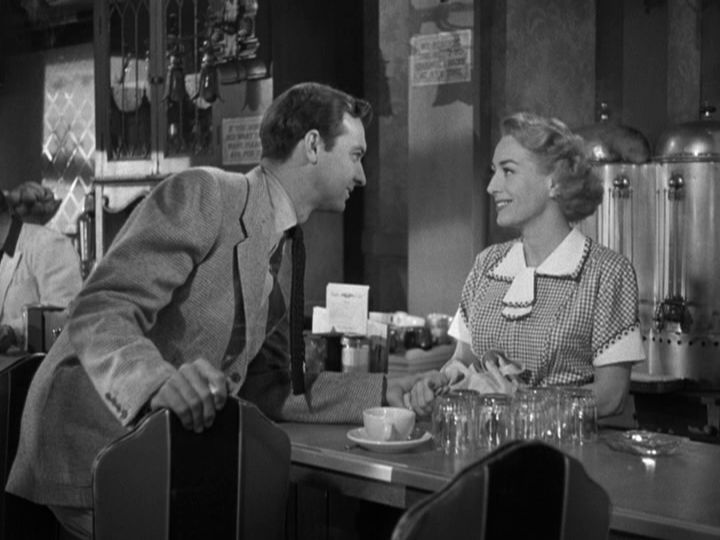 Flamingo Road was one of Joan’s last films with Warner Bros., made just a couple of years before she became a free agent. I’ve always loved Joan’s work at Warners, even though my heart truly belongs to Bette Davis, and the rivalry between the two has turned into such a huge cultural thing that I often feel guilty for enjoying a Joan Crawford Warner Bros. flick. To make matters worse, Flamingo Road was originally intended as a vehicle for Ann Sheridan, and I think she would have been amazing in it. (Check out that studio copy in the linked article. Oh, brother! They sure laid it on thick!)  In fact, the property was bought specifically for her, and studio notices sent out about the film in its early stages very clearly mention the fact that the corrupt politics all centered around the KKK. By the time the film was made with Crawford — per Mark Vieira, she demanded it be taken away from Sheridan and given to her instead, and Warners acquiesced — all mentions of the Klan were removed.

Despite being very much toned down, there’s still some pretty saucy stuff here. There’s a definite post-war attitude in the film; Dan, for instance, makes a point of asking Lane her name after he’s slept with her, and a bad guy gets shot and no one has to go to prison for it to satisfy the Breen Office. Politically, though, the film is a completely neutered version of the novel. It gets the full Hollywood treatment in that no one really gives a hang about corruption: one or two dirty politicians bite it and suddenly everything is just fine. Variety’s own Herm, however, insisted that the political corruption in the film was heavily exaggerated for cinematic effect. I suppose he may have been referring to a hilarious moment when we learn a “mother’s committee” has organized a violent pitchforks ‘n’ torches protest against a woman with a naughty past, where they throw rocks through her windows in an attempt to literally stone her. Because nothing says “we want a clean and respectable town” like trying to bash someone’s head in with a rock.

“You just wouldn’t believe how much trouble it is to get rid of a dead elephant.”

Flamingo Road is pretty standard Warner Bros. fare for the 1940s, a little edgier than usual but with the slick production values and solid character actors everyone had come to expect. That said, there are some errors of continuity that you don’t generally see in Warner films of the time. An alternate take of Lane in her tent when Carlisle first shows up is briefly used, notable because her mouth isn’t moving even though she’s supposed to be singing, and her hair is a different color and style. Several scenes of Greenstreet’s have his clothes going from rumpled to tidy back to rumpled again, and the less said about his accent, the better. 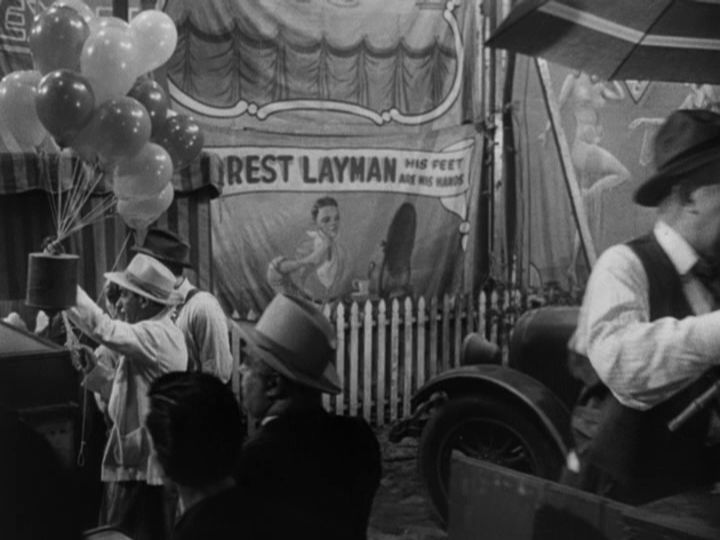 Lane is first seen working at a carnival that features an armless man who does everything with his feet. A missed opportunity for a reference to The Unknown! Not that Joan would have appreciated a reminder in 1949 that her career began in the silents.

Greenstreet is good, though, even if he’s been given a character without much to do other than be evil. Zach Scott is great as usual, and Gladys George as Lute Mae (pronounced Looty May) is just a whole lot of fun. Fred Clark, still early in his career, has a small role that he plays so well you wish it were a larger part.

Lane runs the gamut from fallen carnival dancer to girl trying to make good to rich society dame, with all the requisite melodrama that entails. Politically, some of the men around her do bad things for power, some go bad because they’re weak, some bad men want to stop being bad. It’s all kind of vague and not very interesting, as Semple’s evil nature is only of concern when it hurts Lane. Lane, and by extension, Joan Crawford, is the center of this particular universe, and if anything happens in the film, it has to be about her. 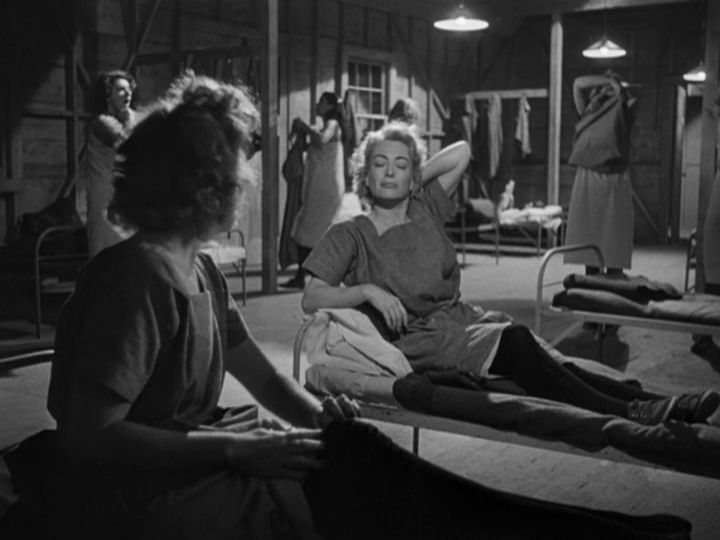 Lane ends up in the hoosegow, as one does, and in the same prison garb she wore in Paid (1930).

The Warner Archive MOD DVD comes with the same special features as the original release: “Curtain Razor” cartoon, an episode of “Playhouse Radio” featuring Joan in 1950, and the standard featurette that was produced for most of the Warner releases back in the mid 2000s.