Based on the excellent A. Scott Berg biography Goldwyn: A Biography

, made-for-TV documentary “Goldwyn: The Man and His Movies” (2001) tells the life and career of Samuel Goldwyn, legendary movie producer. The book, published in 1989, is a lengthy and detailed account, while remaining highly readable and entertaining. Berg was also one of the credited writers of this documentary, as well as occasional interviewee. Unfortunately, the documentary doesn’t compare to the book at all.

There’s not much about Goldwyn I can tell you from this documentary that you can’t find almost anywhere online, so I’ll sum up:

Born Schmuel Gelbfisz in Warsaw in 1879, as a teenager he walked across Europe to emigrate to London. It was there he Anglicized his name to Sam Goldfish. He earned money — his daughter says relatives told her he stole the money to afford ticket fare — to sail to America, but he got off the boat in Canada to avoid immigration officials. Again, he walked on foot from Canada to New York City and eventually landed in Gloversville, New York, where Goldfish became a successful glove salesman.

One day while walking to his office, he stopped in a movie theater and immediately decided the film business was for him. He convinced his brother-in-law, 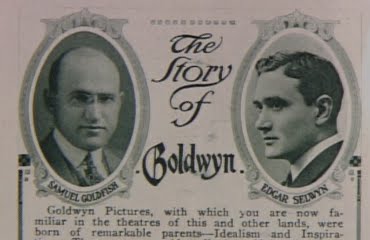 Jesse Lasky (a former vaudevillian) to invest in films with him. Together they hired playwright Cecil B. DeMille to direct their first film, The Squaw Man. The film was a success and their company soon merged with Adolph Zukor’s Famous Players to form Famous Players-Lasky.

Goldfish left Famous Players-Lasky rather acrimoniously and formed a new company with Edgar and Archie Selwyn. The company, called Goldwyn Pictures — “Goldwyn” being a combination of the first half of “Goldfish” and the last half of “Selwyn” — was somewhat successful. Goldfish legally changed his name to Goldwyn, but again, fell out with his business partners and was kicked out of his own company. The company partnered with Metro Pictures and Louis B Mayer to form Metro-Goldwyn-Mayer. The use of Goldwyn’s name in a company that he never was a part of upset him his entire life, but Goldwyn’s son said in the documentary

that if he could get free publicity from people thinking he was involved with MGM, he’d always take it.

In 1923, Sam Goldwyn formed his own studio and independent production company. He was in business until 1959, well-known for his frequent malapropisms and for producing many critically-acclaimed films such as The Best Years of Our Lives, “Wuthering Heights, and Stella Dallas. Goldwyn retired in 1959, and died in 1974.

The documentary, narrated by Dustin Hoffman, tells us the basic details of Goldwyn’s life and career. While there are some interesting interviews from people who worked with Goldman, by far the most fascinating interviewee is his daughter Ruth. Goldwyn was a difficult man, and his first wife, Blanche Lasky, wasn’t about to put up with his temper or philandering. Their daughter, Ruth, went largely ignored by Goldwyn for most of her life. A lively woman with lots to say, she was both tactful and honest in her interview. Ruth revealed much about her father, but also about her grandmother, a large, angry woman who Goldwyn both hated and honored. We’re also treated to reminders of just how important it was for Sam Goldwyn to be fashionable and socially well-connected. His second wife Francis, a beautiful former actress, spent her entire life making sure Goldwyn threw the best and most well-attended parties in Hollywood.

Despite the lack of in-depth information, there’s plenty to see. The documentary includes lots of stills and 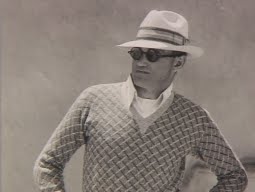 clips from Goldwyn’s career, as well as family photos.

The biggest flaw in the documentary is the narration. Dustin Hoffman narrates with a stumbling, disconnected manner that sounds like he’s having trouble reading the script. His pronunciations are off; when he says “Merle Oberon”, one gets the impression that he’s never heard the name before in his life. The writing in the narration is quite bad, as well. A prime example was this gem about Goldwyn: “This time, he would not make the same mistake twice.” What does that even mean? It’s not only cliche, it’s confusing. Unless they were deliberately attempting a malapropism of their own as a sort of in-joke, it doesn’t make any sense.

For those wanting to know more about Goldwyn, I recommend sticking with A Scott Berg’s 1989 biography.