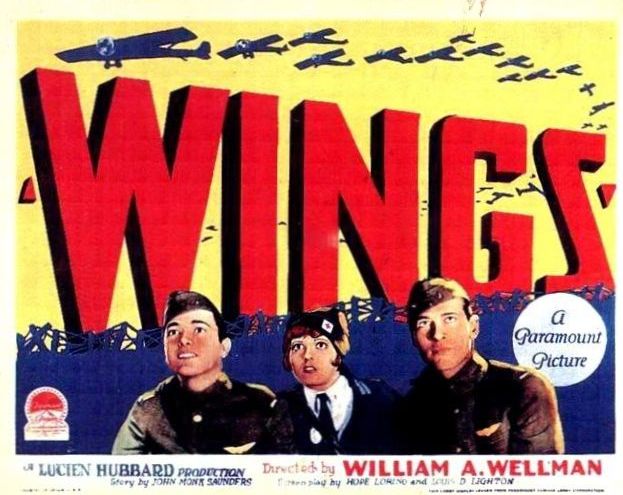 Eighty years ago today the silent movie classic Wings premiered to general audiences. Wings, directed by William Wellman and starring Clara Bow at the height of her career, originally premiered on April 12, 1927, at the Criterion Theater in New York, four months before its general release.

Wings is about two young men, Jack (Charles Buddy Rogers) and David (Richard Arlen), who sign up for military service as pilots in the U.S. Signal Corps during WWI. However, complications arise through a classic love quadrangle: Mary (Clara Bow) loves her neighbor Jack, but the poor boy is oblivious. He’s in love with Sylvia (Jobyna Ralston), so much so that he doesn’t realize she and David are lovers. Just before he leaves for the war, he visits Sylvia and mistakenly believes a locket she’s intended for David is actually for him. Sylvia doesn’t have the heart to tell Jack that the locket was for David, and lets Jack take it.

David and Jack end up in basic training together, along with comedy relief Herman Schwimpf (El Brendel). Now, I know it’s not cool to like El Brendel, but I can’t help but be charmed by the little guy. He was the personification of the goofy Vaudeville ethnic performer, and his trademark line “Yumpin’ yimminy!” wouldn’t elicit even a chuckle today. What viewers need to remember, though, is that Brendel was a relatively fresh face in 1927. After a career on Vaudeville, he entered films in 1926, and Wings was only his fourth movie appearance. He was wildly popular and, according to film critic Richard Barrios, was the most popular comedian in the country by 1930. Today, he’s largely forgotten.

I had intended on including El Brendel in one of my “In the Background” posts, but Brendel’s role in Wings is no bit part. After providing the comedy relief during basic training, we discover Herman (Brendel) has flunked out, only to become an airplane mechanic who appears throughout almost the whole movie.

The real bit part in this movie is Gary Cooper’s role. Cooper became a star soon after Wings was originally released, and movie posters for the 1929 re-release of Wings list Cooper as a co-star. In fact, Cooper is only in the film for about two minutes, and gives one of his trademark half-bored performances. I’m not a fan of Gary Cooper, and it’s somewhat disheartening to see his stiff acting style so solidified even in his small early roles. Many critics have complained that Richard Arlen was only hired for his good looks, but I think in this film that charge can be leveled more squarely at Gary Cooper.

Jack and David dislike each other at first, but by the

end of basic training, they’re fast friends who support each other throughout the war. They always bunk together, fly together, and even go on leave together. What keeps this from becoming a trite and boring buddy film is the simmering intensity of Richard Arlen’s performance, especially when contrasted with Charles Buddy Rogers’ boyish enthusiasm. David always appears to be brooding over something that no one else around him knows, or would even understand if told.

Rogers gives a good performance as the naive Jack, especially during the scenes where he and David are on leave in Paris and have hooked up with some French floozies. After drinking too much champagne, Jack charmingly hallucinates bubbles during his extended drunken stupor. Mary (Clara Bow) is now a soldier herself, having joined the Women’s Auxiliary as a driver, and she sees Jack while he’s on leave. She immediately realizes Jack’s about to lose his virtue to a floozy and, in a scene that’s almost believable, she rescues Jack by changing out of her uniform and into gorgeous slinky dress. The thin plot here is of no importance: while Clara’s getting back out of the evening dress, the audience gets a brief glimpse of her breasts. Who’s going to complain about that? Nobody, that’s who.

Clara Bow is absolutely luminous in this film. She’s perky, charming, lovable, and wears her heart on her sleeve. It doesn’t hurt that she’s drop-dead gorgeous. Her role isn’t particularly meaty, even in the more salacious Paris scenes, but she gives it a fun-loving realism that’s incredibly entertaining to watch.

Wings is often criticized for having a weak, uninspired plot, a complaint that’s far too harsh for the reality of the film. The comedy and romance isn’t deep by any means, but if you’re expecting deep, you’re expecting too much. The comedy is simply relief from the war, and the romance provides little more than the necessary friction between Jack and David.

The battle scenes and dogfights are as intense now as they must have been eighty years ago. The effects are simply amazing. Wellman not only filmed experienced pilots re-enacting WWI dogfights, but he attached cameras to the fronts of the planes to film the pilots head on as they flew. The effects of burning planes crashing to the ground are quite good for the time. Smoke canisters were attached to the planes while flames were added via animation in post-production. The result is spectacular.

Wings doesn’t hold back when it comes to wounded or dead soldiers. In one scene a huge explosion results in a soldier being thrown violently across the screen. Wounded pilots cough up lots of blood and writhe in half-conscious pain until their plane crashes into the ground.

The winners of the first Academy Awards were announced months before the ceremony. The dinner and ceremony itself, held at the Hollywood Roosevelt, attracted almost no media in the small audience (pictured). However, the 1928-29 awards the next year attracted quite a bit of attention, including the first live radio broadcast.

Midway between the date of general release and today, Wings celebrated its 40th anniversary by appearing on an episode of “Petticoat Junction”. Stars Arlen and Rogers attended the “premier” of the film at the Hooterville theater; the joke, apparently, was that the theater was so far out in the sticks that it didn’t get a chance to show a 1927 film until 1967. In 1967, the audience for “Petticoat Junction” could be counted on to remember a 40 year old film. That’s just no longer true.

Despite being touted as the first movie to win an Academy Award for Best Picture, Wings is difficult to find. It’s available in old laserdisc and VHS versions, as well as in two recent Hong Kong DVD releases which have Mandarin subtitles that can’t be removed. However you can get it, Wings is definitely worth watching, and I hope to see it released in an English DVD version soon.

Note: This post originally appeared on another, now-deleted blog, on the 80th anniversary of the premier of Wings to a general audience. Updated December, 2014.