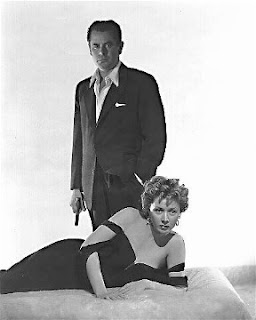 The Big Heat (1953, dir. Fritz Lang) is the quintessential classic 1950s film noir. The film begins, as they say, at the beginning: The suicide of a police officer and his hard, greedy widow looking to cash in while the body is literally still warm. She reads the cop’s suicide note and calls crime boss Mike Legana. The dead man apparently was on Legana’s payroll, so the widow blackmails Legana with the note.

Det. Sgt. Dave Bannion (Glenn Ford) is quick on the scene with the rest of the officers and a coroner. No one’s too concerned about the suicide, not until Bannion makes a stink. He interviews the widow and becomes more suspicious. Since the audience knows she’s up to no good, at first it doesn’t occur to us to wonder just why he is suspicious. We think perhaps he’s possessed of terrific instincts, or maybe this is a bit of a contrivance, and move along.

Sure there’s something more to the suicide of a fellow cop, Bannion is excited when an unknown woman calls his home to tell him she knows something. He meets the woman, politely referred to as a “barfly”, and asks her hard, direct questions in front of a bar crowd that any experienced police officer would know is not friendly, not to him or to the woman.

The barfly told Bannion that her boyfriend, the married cop who killed himself, had no reason to commit suicide. She’s sure was murdered. Bannion doesn’t trust the barfly — nobody does, she’s just a B-girl — but he still feels his suspicions are somewhat vindicated by what she tells him. Bannion leaves and the barfly remains, garnering a lot of hard stares while she orders another drink. The first time I watched this scene I literally yelled at the film, “Don’t do that! She’ll get killed for talking!” And she does.

The barfly’s murder was, according to the coroner, a psychopathic sex crime. Her body is covered in cigarette burns; Bannion replies, “Yeah, I saw them, every single one of them.” Bannion experiences a bit of regret when the barfly’s body is found, but quickly shrugs it off and charges forward. He questions the widow again, more harshly this time, and starts bothering Lagana personally. He is warned off by the police chief who, as Bannion’s wife later says, is probably in a tight spot: between the powerful Lagana and his many friends in high places, the chief just wants to retire in peace. Bannion is sure it’s much more sinister, that the chief is corrupt and probably on Lagana’s payroll. 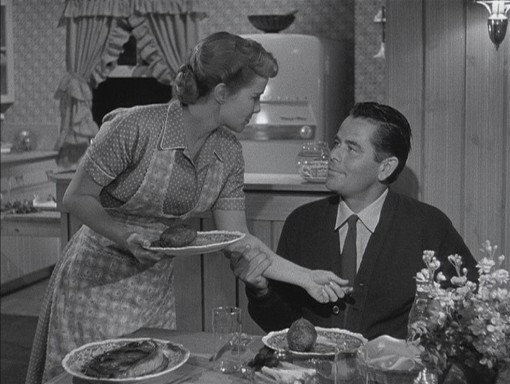 We’re treated to a few scenes at home with Bannion and his loving, understanding wife Katie (Jocelyn Brando, Marlon’s older sister) and his little girl. Home is comfortable, of course, a nice little house with a nice little family. As the nice wife serves her husband a nice steak dinner, their banter becomes rather overtly sexual, ending with Bannion roughly grabbing Katie by the arm. Katie hardly notices and keeps serving, dutifully feeding her husband a bite of raw, dripping steak. Maybe things aren’t so nice after all.

When Katie gets a frightening phone call from someone who suggests Bannion should back off the case, Bannion gets angry. He storms into the crime boss’ house and disrupts his party and his home; Legana retaliates by sending Vince (Lee Marvin) and another henchman to kill Bannion by rigging his car to explode upon starting. Unfortunately, Katie was in the car and not Bannion, and she’s killed instead.

This now gives Bannion a retroactive reason to justify all his previous actions, although by now most viewers realize there’s something not quite right with the story. Bannion’s initial incorrect hunch that the cop was murdered is somewhat responsible for the situation escalating into actual, multiple murders. Sure, a cop on mob payroll offed himself, and the widow blackmailed the mob boss for money — but it’s not the kind of thing a cop usually sacrifices his entire idyllic domestic existence for. Maybe Bannion’s just fed up with the system and is willing to sacrifice everything to change it… or maybe Bannion didn’t so much sacrifice his life as he rejected it.

Bent on revenge, Bannion, within a few days of his wife’s funeral, has given up his badge, shipped off his little girl, stored the furniture and sold the house. Now based out of a seedy hotel room, he confronts Vince at the bar. Lagana has chastised Vince for screwing up the car bomb, insisting that he doesn’t want to work like that, but Vince isn’t much moved. Vince is prone to violence, and we see this at the bar where he burns a B-girl (Carolyn Jones) with his cigarette. Bannion obviously remembers the barfly’s burns and accosts Vince, who leaves in a panic, forgetting to take his beautiful moll with him. 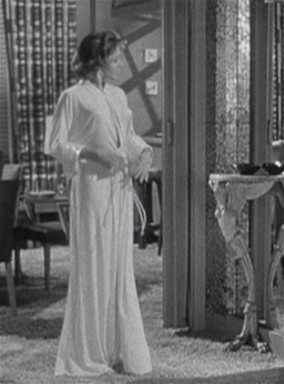 That moll is Debby (Gloria Grahame), a vapid and narcissistic mob girl who is obviously a bit conflicted about her life. She loves the lush house and fancy clothes she’s given, but she chafes at Vince’s disregard for her and his love of slapping her around. Debby sees Bannion stand up to Vince and, when she’s left behind, follows Bannion back to his hotel room for “research”. She’s clearly making sexual advances to Bannion, but he’s having none of it, lumping her into the same category as the dead barfly. “You’re about as romantic as a pair of handcuffs,” she sulks when he refuses her advances.

Debby leaves and returns to Vince with an unconvincing lie about where she’s been. He knows the truth, and enraged at the thought of Debby in Bannion’s hotel room, Vince hurls boiling hot coffee on Debby’s face. In a panic she’s sent off to the hospital. After treatment she escapes and runs back to Bannion’s hotel room, face half covered in thick bandages, scared out of her mind.

Her injury redeems her somewhat for Bannion. He allows her to stay while he digs around. At a junk yard he’s approached by a disabled older woman who tells him what he needs to know. She alternates between being scared for her life if they find out she talked, and grateful that anyone, even the mob, would hire someone “like her”. Bannion has no compunction about using this woman who obviously physically cannot defend herself as a decoy to identify Vince’s subordinate. She does so, Bannion beats up the henchman, and decides to confront the widow Bertha once again.

When we first saw Bertha she was an asexual, hard-edged 50-something woman, but now has somewhat softened. Her face has less lines, she’s wearing nicer clothes, her home is well-lit and welcoming. Bannion isn’t fooled and threatens to kill her so the her dead husband’s suicide note will be released, ruining Lagana. He doesn’t go through with it.

He returns to his dingy hotel room where a little scene of faux domesticity takes place between Bannion and Debby. He brings her food while telling her about Bertha, the letter, and how Bertha’s death would ruin Lagana and his men, even though he knows Debby wants nothing but revenge against Vince for ruining her looks. As he leaves to go check on his daughter, he tosses the gun on the bed, practically inviting Debby to kill Bertha for him. And she does. Debby arrives at Bertha’s home, they’re both in mink coats, wrapped in the trappings of their successful manipulation of mob men. Both are at a new point in their lives; Bertha, unable to use sexual manipulation, had to resort to blackmail. Debby, now unable to use her looks to grab a man, doesn’t know what to do, so she chooses revenge. After shooting Bertha, she sneaks in on Vince and scalds him, too, revealing her own disfigured face to show him what his immediate future will bring.

Bannion arrives, there’s a shoot-out of course, and Debby is caught in the crossfire. Bannion turns Vince over to the cops and consoles a dying Debby with tales of his former life and of his dead wife. We end with Bannion back at his old job, smiling and cheerful, welcomed back on the police force and apparently satisfied with a job well done. As he leaves for a case he’s offered coffee, but tells the sergeant to hold on to it: “Keep the coffee hot.” Behind him is a sign appealing to readers to “Give Blood Now”. Everything is back to normal.

Like many classic film noirs, The Big Heat is crammed full of cliches. It’s difficult to tell what elements of the genre were invented with the film and what were already cliche at the time, though since The Big Heat comes at the end of the classic film noir period, one can assume all film noir elements were already well-established by the time of its release. Some elements are pushed to their limits, such as the sexual content, which was bold for 1953. Other elements, like the obvious comparison of guns to penises, are so blatant as to be almost camp. 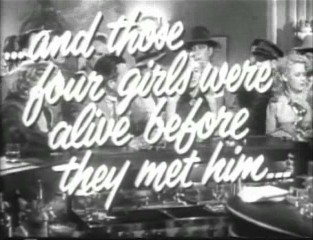 The juxtaposition of urban decay versus suburban domesticity is quite well done. Plenty of examples of false domesticity are given, but one also wonders just how true the “real” domesticity of Bannion’s home was. Was his unconscious disregard for the safety of the women around him bad luck or sabotage? Roger Ebert notes Bannion never accepts responsibility for his part in the deaths of four women, but I’m not sure a character like Bannion ever could. Death for him is redemption, it’s justification for his own actions and resolution to his problems. That it involves others making the ultimate sacrifice simply cannot occur to him without destroying him.