The Maltese Falcon was, of course, a novel before it was a film. Written by Dashiell Hammett and published in 1930, the novel was used as the basis of a film three times between 1931 and 1941.

The first film, “The Maltese Falcon” (1931), starred Ricardo Cortez and Bebe Daniels, two mainstays of the silent era who managed to make a relatively smooth transition to talkies. The 1931 version of the movie was made in the pre-code days before the Hays office clamped down on so-called indecency, and therefore is notable for its many sexually suggestive scenes. Due to Hays code restrictions, the film could not be re-released until the 1960s except in edited form; when it was re-released, it was given the new title “Dangerous Female” to avoid confusion with the 1941 “Maltese Falcon” film. (The Warner Bros. DVD release of the film restores the original title.)

Possibly because the 1931 film could not be re-released, Warner Bros. made a second version of the film in 1936, this time called “Satan Met a Lady”. Starring Bette Davis and Warren William, this second film based on the Hammett novel featured several plot changes, including a focus on humor rather than mystery and a ram’s horn instead of a falcon statuette; the film was a flop. 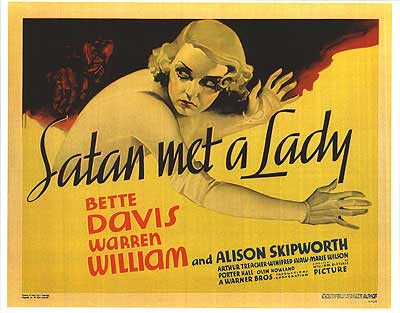 In 1941, first-time director John Huston made “The Maltese Falcon”, again for Warner Bros. Starring Humphrey Bogart in a role that would define film noir detectives for decades, the film is considered an American classic.

But what of the actual falcon, the MacGuffin, the dingus everybody wants? It’s said there were two Maltese Falcon props made for the movie. Both were made of lead and weighed between 42 and 50 pounds — sources list 42, 45, 47 and even 50 pounds as the official weight. Most sources claim the second lead prop was made after the first one was dropped and noticeably dented during filming. The story varies, but either Sydney Greenstreet, Lee Patrick or Humphrey Bogart was responsible for the denting of the tailfeathers; one story claims that Patrick actually dropped the falcon on Bogart.The dented falcon is owned by movie memorabilia collector Dr. Gary Milan, a California dentist, who has loaned the falcon out for various public appearances. Milan counts the piano and an exit visa from “Casablanca” among the many amazing movie artifacts in his collection.

For years, it was believed Milan’s lead falcon was the only legitimate falcon from the film.That was until a second undented lead falcon was found in actor William Conrad’s apartment after his death. This falcon was given to actor William Conrad by Jack Warner and was sold at an auction of Conrad’s estate in 1994 to a private collector. It has not been shown to the public since, although Wikipedia reports it is in the possession of Ronald Winston and was used as a model of a solid gold replica made for the 69th Academy Awards. This may be inaccurate, as Milan’s dented falcon is the one in the Warner Bros. museum at this time. While the provenance of the second falcon is well-documented, how Milan came into possession of the first falcon is unknown. 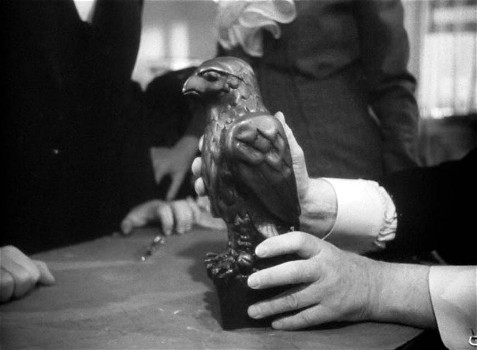 It’s debatable whether that undented falcon made it onto the screen or not, although some reports state that both lead falcons have knife marks from being used in the scene where Greenstreet tries to scrape the paint off the falcon. According to the founder of thefedoralounge.com (and creator of some very nice replicas of the falcon based on an original lead statue) both falcons were in the Warner Bothers prop department for years, forgotten and used for various utilitarian tasks due to their weight.

However, the falcon Bogart carries around was not a 50-pound lead monstrosity. Milan refutes the idea that there are lighter falcons, and says that the two lead falcons are the only original falcons in existence. Yet in 1991 a resin (or plastic) falcon was found at a flea market. In determining the authenticity, Meta Carpenter, the script supervisor on “The Maltese Falcon”, confirmed that a lighter resin falcon of about 6 pounds was made for several scenes; it even appears in some publicity stills. Collector Gary Milan rudely dismissed her recollections as being nothing more than an old woman’s confusion. Richard Roeper, film critic, mentioned a resin falcon during a blurb about the recent Christie’s auction of “Star Trek” memorabilia. Even Roeper concedes the resin falcon simply “may” have been used in the film. Be that as it may, the idea of many actors being forced to carry a 50 pound lead falcon for several takes seems unlikely. They may have been used for close-ups and shots where the falcon stays on a table, but not much else. 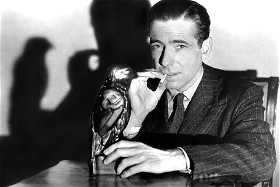 Despite the controversy, Profiles in History, a Hollywood memorabilia auction house, sold this resin model at auction for $92,000 in the mid-1990s. Their catalogue page for the falcon has some terrific pictures and a bit of history, too. (The Profiles in History main page lists several amazing auctions of memorabilia; it’s definitely worth checking out.)

We’ll probably never know how many real falcons were made and how many exist today. While reports vary, it’s certain that two authentic lead falcons exist, and likely at least one resin falcon as well. However, there were allegedly more falcons made for backups and photos. One replica made for publicity stills was kept at historic John’s Grill. The replica was stolen from the restaurant in 2005, and a replacement has been made and will be installed this month. Gary Milan has also suffered through a robbery, losing many irreplaceable, original movie artifacts. Movie memorabilia is a dangerous business.