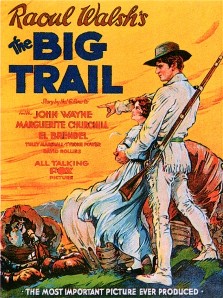 When “The Big Trail” (1930) arrived at the house a few weeks ago, it was the last of a long string of John Wayne films I’d decided to watch for what might be called “educational purposes”. To say Wayne is not my favorite actor is to understate the situation, yet I hadn’t given Wayne much of a chance recently. I figured if I was going to continue to publicly state my rather strong opinion about his films and his acting ability, I should do so with at least a couple dozen Wayne films under my belt. After viewing “The High and the Mighty”, “The Searchers” and “The Long Voyage Home”, the arrival of “The Big Trail” was no surprise to me, although by the time I popped it into the player, I had completely forgotten my original reason for wanting to see it: my hero, El Brendel.

You’ve heard me say this before, and you’ll hear me say it again: “The Big Trail” is not a good film. John Wayne was young, tall, and beautiful — my gods, he was beautiful — but he couldn’t act his way out of a cool damp sack. He was clearly hired for his beefcakey attributes. This is made clear early in the film when he gets his hair wet and tousled and strikes an obvious pose for the camera. Not that I’m complaining, I’m just here to inform. 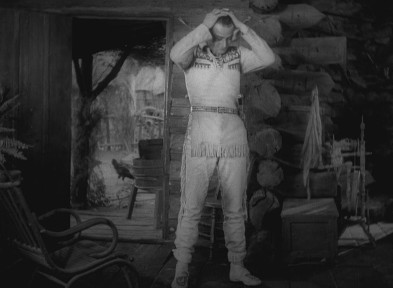 This early talkie could be used as a checklist for all the techniques that had been utilized in silents but were once again absent, thanks to the limitations of sound technology. The film features static blocking, poor dialogue, dated acting and unintentionally amusing microphone placement. The plot is thin and the tension nonexistent. This film isn’t a total loss: it can always serve as a bad example.

The film begins when Breck Coleman (John Wayne) catches up with a large wagon train on the Oregon Trail. He and his old friend Zeke talk a bit, and we learn that Coleman is after the killers of his friend, a fur trapper. A “certain lowdown coyote” robbed and murdered the fur trapper, and Coleman is out for revenge, which takes him on a different trail than the wagon train: “Our trails fork here,” he tells Zeke.

In some rather unsubtle editing, we immediately cut to the grizzled visage of Red Flack (Tyrone Power, Sr.), the nasty, mean, flea-ridden wagon train boss. He and his sidekick Lopez are clearly responsible for the murder of the fur trapper. Within minutes Coleman finds some of the stolen furs and suspects Red of the murder, too, so he decides to stay with the wagon trail. It helps that Coleman has just met David and Ruth (Marguerite Churchill), brother and sister who are traveling by wagon to meet their family who has gone ahead of them. Coleman immediately takes a liking to Ruth, but she is decidedly uninterested.

Bill Thorpe (Ian Keith), a Louisiana gambler, also finds Ruth attractive. Thorpe first met Ruth on their steamboat journey to meet the wagon train, and he asks her repeatedly to return to Louisiana with him. At some point early in the film, though, Thorpe’s murderous past is discovered and he is told he cannot board the steamboat when it continues on to Louisiana, but he’s also not allowed to stay in the port town without risking hanging. 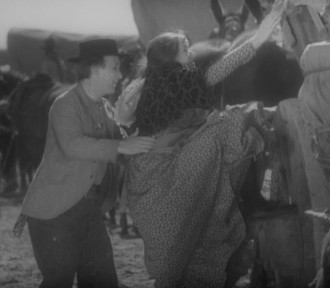 He approaches his old friend Red about his dilemma, and Red offers to let Thorpe come along on the wagon trail. He, like Coleman, plans to spend his time on the trail wooing the beautiful Ruth.

And of course there’s El Brendel, who plays Gus, the “comical Swede”. Gus arrives at the same time Ruth and Thorpe do, I assume on the steamboat. Gus is accompanied by his wife, her sister, and their mother. Thank goodness for the portly mother-in-law! Otherwise we wouldn’t have jokes involving El carrying her large butt over some slick mud and shoving her large butt up into a wagon. Wait, was that sarcastic enough?

I shouldn’t complain about El Brendel’s lowbrow humor, as Brendel is clearly one of the best actors in this film. This is ironic, as I just got into a bit of a snit with someone on a film forum who was angry because he thought I considered El Brendel an actor. At the time I didn’t consider him an actor, more of a comedy personality, but now I realize I was wrong: he is an actor, and is quite natural in front of the camera. His old Vaudevillian shtick just doesn’t translate well into film. 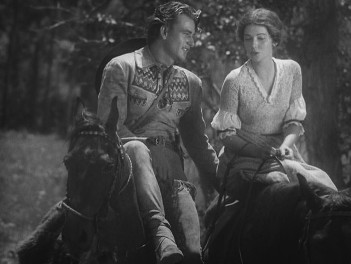 Another actor, Tully Marshall as Coleman’s pal Zeke, is quite good, and Ian Keith as the Louisianian is bland but competent. These three actors are the most accomplished and confident of the bunch, and they are the sole reason that this film doesn’t devolve into a complete joke.

Marguerite Churchill has an astonishing lack of presence and shows occasional confusion in her motivation. As long as she’s scowling she’s okay, but when she gets out of that comfort zone she’s clearly lost. Wayne reads every line as though he were struggling just to remember the words.

Power’s gruff, nasty-looking Red is played so broadly that he’s more suited for a Hal Roach comedy short than for this film. Every line Power utters is spoken in a forced, over-pronounced dialect. When he says “thar” or “whar”, he says it exactly as it’s spelled. Indicating a jug of liquor, Red says to Thorpe in a slow, deliberate voice: “That rum’s for you and me, HAR HAR HAR!” He doesn’t laugh, he instead says the word “HAR” three times in a row. It’s terrible, just terrible. What the heck was Raoul Walsh doing during this film? He certainly wasn’t directing his young, inexperienced, and/or confused cast. 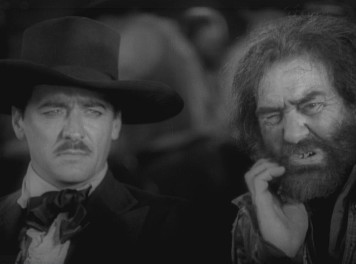 Yet, like other bad movies before and since, “The Big Trail” has a definite place in movie history. It’s John Wayne’s first starring role, and it’s a prime example of an early, epic talking film. What “The Big Trail” achieves in cinematography is important. The film was shot with the Grandeur filming system, a 70 mm early widescreen method developed by Fox Film Company. Grandeur was in use primarily in 1929-1930 and almost completely discarded by 1931, so it has a rather limited legacy.

“The Big Trail” was filmed in both standard 35 mm Movietone process and 70 mm Grandeur, so there are two versions of the film in existence. Probably the most famous Fox film to be filmed in both Movietone and Grandeur is “The Bat Whispers”; you can see a comparison of the title screens in 35 mm versus 70 mm here at the Widescreen Museum. Cinematographer Arthur Edeson wrote an article about the use of Grandeur during filming of “The Big Trail”, which you can read here, also thanks to the Widescreen Museum. 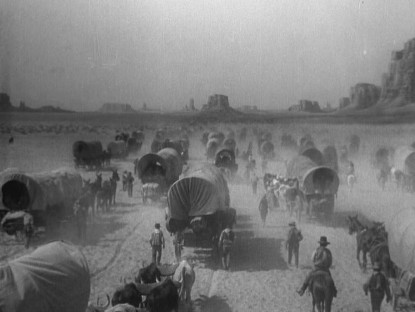 Many of the scenic shots are nice in the Movietone version, but I would love to have seen them in Grandeur. In Movietone, the backgrounds look flat and lifeless, almost like backdrops, as you can see in the footage filmed at Devil’s Tower. The foreground action is spectacular, though, especially for a 1930 film. It gives it a modern feel which is a stark contrast to the old-fashioned intertitles that pepper the film.

The scene where the wagon train first moves out is enormous in scope and a real treat to watch. Later scenes with buffalo are the same. Unfortunately, these scenes are nearly ruined by incompetence. First, the microphone placement is so poor that you can hardly hear the sound of the wagons or buffalo. Instead, you can clearly hear a single extra hooting and hollering in authentic frontier gibberish, drowning out almost all other sounds. The second problem is the editor’s decision to use fast motion. It’s distracting and, let’s face it, fast motion has never achieved anything but laughter. It’s great for “The Munsters” but not for a serious film. 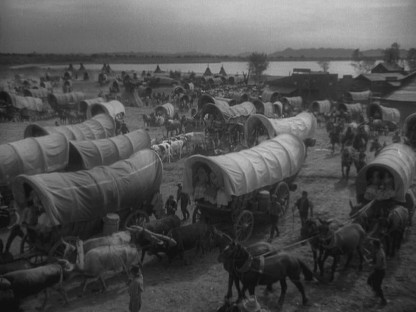 Once on the trail, very little happens. Coleman tries to woo Ruth, but she is only hostile toward him. Red and Lopez realize Coleman knows they killed the fur trader, so they decide to get their Louisianian friend Thorpe to murder Coleman to save their hides. (No pun.) Gus provides humor on occasion, first when his wagon falls off a cliff — his mother-in-law was unfortunately not in the wagon at the time — and later when his wife has twins. He’s pleased to discover they’re both his, and he celebrates by having two drinks, one for each twin. The wagon train survives an Indian attack and crosses a harsh desert on the way to California.

Meanwhile, Coleman’s friend Zeke discovers Thorpe’s plan to shoot Coleman. Zeke shoots Thorpe while he’s searching for Coleman, but complications arise when Ruth’s brother sees Thorpe get shot but doesn’t see the shooter. When he tells Ruth, she assumes Coleman murdered Thorpe in cold blood. She tells everyone that Coleman is a murderer, and when Coleman returns from a walk in the woods, the wagon train has decided to hang him. Zeke intervenes and tells them what really happened and why. Both Zeke and Coleman are spared, of course, and Ruth realizes she’s been wrong about Coleman all along, and you know what that means: true love.

Later that night Lopez tries to kill Coleman but fails. Figuring their luck is up, he and Red run off into the winter to escape Coleman’s (and the wagon train’s) wrath. Coleman goes after them the next morning after saying goodbye to Ruth, telling her “Our trails will cross again.” During the chase, Lopez becomes frostbitten and falls into the snow, unable to go on. The evil Red leaves Lopez to die as he screams and begs not to be left alone, but not before taking all the valuable furs off Lopez’ body. 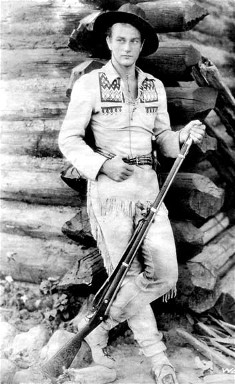 Coleman comes across the frozen stiff body of Lopez and continues on until he catches up with Red who, under cover of a very obvious snow machine, is skulking about the wilderness. Coleman shoots Red Flack, who dies in the traditionally bad silent movie way: hands straight up in the air and twirling. Coleman returns to Ruth, who has set up home in a cabin in California, and all is well.

A bit of a personal note is in order. I’ve been working on this post for more than a week, but have had no motivation to finish it. I could not get interested in this movie. It was just one in a long line of bad films I’ve recently watched in an attempt to educate myself in film. And that’s what this blog is: a record of my travel through the world of (mostly) American films. I focus on films and actors which are lesser-known or almost impossible to find because I want to provide information that may not be widely available. What I’ve discovered is that not all hard-to-find films, not even the ones recommended to me by fellow cinephiles, are the kind of films to agree with me. I really pushed it too far with this recent John Wayne project of mine; I failed to recognize my own limitations.

So instead of getting bogged down in all this no-good not-fun nonsense, I plan on taking a diversion through my old friends Cult Films and Pre-Code Films. I want to watch and blog about a bad film that is fun, maybe even a little naughty. Every effort will be made to keep things safe-for-work, but I may push the limits now and again. I hope it will still be entertaining for my loyal readers, and it may be more educational, if you know what I mean, and I think you do.

Now if you’ll excuse me, I’m off to watch “Road House”.