For anyone interested in using these posts in research, please read the note at the bottom of the page. Thank you.

This post originally appeared at https://www.shebloggedbynight.com/2008/03/three-wise-girls-1932.html and a copy can still be found at the Internet Archive here.

Note: The old screencaps from the terrible copy of this film I viewed in 2008 were lost in a server move and are no longer on this post. Further, please note that there are several errors in this post. An update with pictures and corrections will be available sometime in 2015. Maybe. Please stay tuned!

Several weeks ago I decided to focus on movies that I want to see, rather than films I feel I “should” see. I haven’t forgotten that promise to myself, but at the same time, I have a backlog of about 50 movies in the “should” pile. “Three Wise Girls” is one of these movies. “Three Wise Girls” is a simple morality tale about the sins of city life and kept women. It’s mostly notable for being an early Jean Harlow performance and one of the last films Harlow made before going on to lasting pre-code fame at MGM.

Cassie (Jean Harlow) works as a soda jerk and is jealous of her friend Gladys’ high-paying New York job. Cassie’s mother says they make plenty to get by on, but when Cassie sees Gladys’ mother with a brand new car, courtesy of Gladys, Cassie goes to New York.

We cut immediately to New York where Cassie is working… as a soda jerk. Same job, different town, but check out those Cupid’s bow lips! A rich guy in a tux, clearly stumbling home from an all-night bender, orders some Bromo-Seltzer and frowns at the platinum Harlow while grousing that he doesn’t like blondes. When Cassie decks her boss for hitting on her in the back room, the rich guy comes to her rescue in getting her last two days’ pay before she leaves to find another job.

The rich guy is Jerry Dexter (Walter Byron), and he asks to drive Cassie home. She refuses, but as she walks away Jerry says a few random sayings, ending with “You don’t understand…” as the scene abruptly cuts to Cassie and Jerry in the back of his limo, where she asks him, “What have you got against life?” 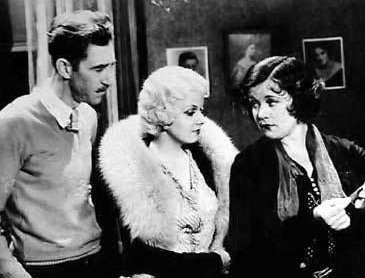 Er, what now? This exchange makes no sense. This cut is original to the film and not a product of the poor quality of copy I found. Copies of “Three Wise Girls” are easy enough for die-hard enthusiasts to find, but these copies have horrible video quality. You can see from the few screencaps I included here that this film is difficult to watch. Many scenes are so washed out that you can’t tell who you’re watching. However, the film does show regularly at film festivals such as Cinesation, the Riskin Retrospective, and Cinevent, and the print there must be better than this one.

Jean returns to her small flat and to roommate Dot, played by Marie Prevost. Marie is the best actor in this film by far. She has the best dialogue, the best delivery, and keeps “Three Wise Girls” from being total dreck. Prevost had been a leading lady in silents in the 1920s, but by the early 1930s had gained weight and was no longer considered sexy enough for the roles she used to play.

Not that she was huge by any means. Chubby by movie star standards, sure, but not so large that she couldn’t have had a solid acting career as a “regular person” and not just the “fat friend”. Then again, we all know of plenty of lovely women who were held as examples of large or full-figured women, despite not being fat in the slightest: Valerie Harper, Vivian Vance, Jane Russell… it’s no surprise Prevost was, too. What ultimately happened to Prevost was unfortunate and sad, a downward spiral of personal tragedies and alcohol that lead to her demise. I don’t feel like going into it here, because what most people really want to hear about Prevost they can find in the crap-shoveling Hollywood Babylon.

Dot makes money by addressing envelopes at home. She spends her days fussing with difficult-to-type names and worrying about money. When Cassie mentions being fired at work for not giving in to the boss’ sexual overtures, Dot wryly notes that a woman in that town can’t have both virtue and a well-paying job. It’s her plan to grab the first man that comes along, and Cassie should do the same.

Cassie gets a call from Gladys (Mae Clarke), who she goes to meet for lunch at a ritzy restaurant. She stops by Gladys’ workplace first, an exclusive fashion salon where Gladys is paid well for live-modeling haute couture. Gladys decides to make Cassie a model on the spur of the moment, which of course works out perfectly, because this is a short 68-minute movie and time cannot be wasted on reality. After Cassie’s fabulous modeling debut (which we don’t see), Gladys stops by her own apartment, an enormous, luxurious place that obviously costs more than even Gladys can afford. When the slimy boyfriend stops by and hits on Cassie while Gladys changes out of her work clothes, it’s clear that Gladys is making her money by being a kept woman for some creepy, lecherous old guy.
Mae Clarke spoke a bit about “Three Wise Girls” in her oral autobiography Featured Player. Clarke said she loved to look at Jean Harlow because she was so “pretty and clean”, with skin as though “she was carved out of marble.” Clarke also shows a bit of resentment, noting that while she had experience working in film and worked her way up in the industry, Harlow never had to “pay her dues”. Because she was beautiful — Clarke makes a point of saying she was beautiful but not talented — she was made a star without having to learn the trade.

Clarke has almost nothing to say about Prevost, despite working with her in four films between 1931 and 1933. She blames Prevost’s downfall on tragedy and the studios habit of avoiding actors who have personal problems, but then states she doesn’t want to talk about Prevost because she only wants to talk about “happy people”.

Clarke comes across as a bit snotty in Featured Player as well as in her character Gladys. She has a few lengthy speeches, mostly moralizing and hand-wringing, and her demeanor is unpleasant throughout. While Variety hands the acting honors to Clarke in the film, they still note her speeches are “stilted”.
After making her excuses to get away from Gladys’ slimy boyfriend, Cassie goes back to her small apartment where Dot is making dinner out of old leftovers. Holding up an aged frankfurter, Dot notes, “that’s one of the finest little weenies that ever graced a paper plate. It’s a little shriveled from old age, but of course you can’t have everything.” Best line of the film, folks. If you ever watch this movie, after this scene just fast forward to the end where Dot and Gladys have it out, because there’s nothing else worthwhile to watch.

Jerry shows up at the apartment to take Cassie out. Cassie reluctantly agrees, while Dot has eyes for Jerry’s chauffeur, played by Andy Devine. After fabulous dinners and a trip on Jerry’s yacht, we see Jerry meet with … his wife! My goodness, Jerry is married! We certainly didn’t see that coming. Oh, no, wait, we did. My mistake.

Jerry’s wife Ruth (Natalie Moorhead) wants to meet Cassie before giving her approval for a divorce, per an agreement she and Jerry once made. What is it with crazy marital agreements among the rich in 1930s films?
Cassie discovers Jerry is married when Ruth visits the fashion salon. Ruth decides she won’t give Jerry a divorce. Cassie has to decide whether to keep seeing a married man or not, and since she loves Jerry, the decision is difficult. Gladys and Dot both pull at Cassie and have it out in front of her, arguing over how a woman in hard economic times should make her living. Gladys wants to talk Cassie out of carrying on with a married man, but Dot encourages the arrangement, pointing out Gladys’ opulent lifestyle. A momentary wacky hijink occurs when Jerry thinks Cassie is already a kept woman — he thinks Gladys’ apartment and boyfriend are really Cassie’s — and he accuses Cassie of feigning propriety. Cassie dumps Jerry then and there.

Gladys said being a kept woman isn’t all roses, and she was right, as her boyfriend left on a second honeymoon with his wife without telling her. She finds out by reading it in the social section of the newspaper and calls Cassie in a panic.

Cassie gets there in time to find Gladys has poisoned herself in remorse. Well, thank goodness for that, we can’t have trollops like her bandying about New York City. Society would collapse.

Cassie goes back to work as a soda jerk. Jerry shows up at the soda fountain announcing he’s getting divorced — via society headline, which is kind of tacky, given Gladys’ suicide and all — but no one cares much about the dead hussy, so all is well.
Wendy L. Marshall notes in her book William Beaudine: From Silents to Television that director Beaudine had a terrible time with “Three Wise Girls”. The film was rushed through production and there were clashes between Beaudine and studio management. When the final product was released, critics didn’t care for the bland morality lesson, and audiences stayed away. While Jean Harlow moved on to an even bigger career after this film, William Beaudine found himself unable to get work for half a year after “Three Wise Girls” flopped.
FURTHER READING:
1932 New York Times review of “3 Wise Girls”
Fallen Star: The Story of Marie Prevost
Variety Review for “3 Wise Girls” from 1932

Note: The first still of Harlow, Prevost and an unidentified man may or may not be from “Three Wise Girls”. It seems to be taken on the set of the film, but neither this scene or the actor on the left appear in the movie.

If you’re interested in using these posts for research, please note the following:
1) You can use my blog posts for sources, but they must be credited in footnotes or bibliography (as should any book, blog, magazine, or other source). You cannot just cut and paste sections of my blog into your own work. Please know that I will not just ignore copyright infringement, should it occur.
2) There may be errors in my blog posts. You’re responsible for doing your own research and verifying anything you read.
3) I will not help you with your Marie Prevost research. Please don’t ask.
4) I own some memorabilia, photos, archival docs, etc., but I do not lend them out for any reason. Please don’t ask.
5) Despite any claim you may have heard to the contrary, I have not assisted nor collaborated with anyone in their book or article on Marie Prevost.