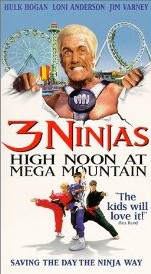 This post contains adult language inappropriate for kids and spoilers for the movie “3 Ninjas: High Noon at Mega Mountain.” Parents, do not let your children read this post. I tell you this because I am your friend.

“3 Ninjas: High Noon at Mega Mountain” is the fourth and last movie in the “3 Ninja” franchise. Rex Reed allegedly said “The kids will love it!”, but keep in mind I can find no confirmation of such a thing being uttered from Mr. Reed’s lips. He may be completely innocent. Please do not judge him.

The actors from the original film play the grandfather and parents, but all new kids were cast in the title roles. The youngest of the 3 brothers, Tum Tum, is played by James Roeske II. His mother Ellie owns Burbank Family Martial Arts, where son James and daughter Emily are also instructors at the school, as is fellow actor Michael O’Laskey who played middle brother Colt. The eldest brother, Rocky, was played by Mathew Botuchis, and had only a few years of karate training.

In some scenes the kids do their own stunts, but many stuntpersons are employed as well. Adult stuntpersons who are often a full or more taller than the actors they stand in for, I should note. Roeske as Tum Tum had his stunts finagled with the use of a really hilarious disembodied mannequin leg.

Oh, did I forget to mention that this is my entry

in Lucid Screening’s 3rd Annual White Elephant Blogathon? Bahahaha! I didn’t choose this film to review, it was chosen for me by some sadomasochistic bastard fellow participant in the Blogathon. You can breathe a sigh of relief now. I’m sure most of you realized it was April 1st, but perhaps a few of you thought I had gone completely off my chum. After this movie, well, maybe I did. About 15 minutes into it, this conversation could be heard in my living room:

HUSBAND: Ha ha! You got owned!
STACIA: Shut up, motherfucker, you’re watching the movie, too.

The plot, as Hank Venture would say, was mostly awful. Grandfather Mori is a retired ninja — does that come with a pension plan? did he get a gold watch when he retired? — who has been teaching his grandsons the ninja arts of ninjaing. He worries that he’s losing his grandsons when he overhears the eldest two talk about moving on in life, because you can’t be a ninja forever, or something pretty deep like that. The youngest feels no need to move on or grow up, as illustrated by his love of television superhero Dave Dragon (Hulk Hogan), host of a blatant Mighty Morphin Power Rangers knock-off. Sadly, Dragon’s show has just been canceled, but in a remarkable coincidence Dragon’s last public appearance will be at nearby Mega Mountain on the same day the three boys were planning on going. 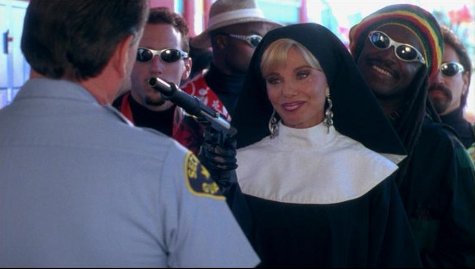 an amazing coincidence, that same day evil prison escapee Medusa (Loni Anderson) and her henchman Lothar (Jim Varney) plan on holding the entire park hostage for $10 million. They take over the park by hijacking the computers, and the three brothers and their new neighbor Amanda are left to rescue everyone. Amanda, in a stunning coincidence, happens to be both a computer wiz and the daughter of a Hollywood special effects guru. In an uncanny coincidence, she has her super high powered computer and a few special effects knickknacks with her to help the boys get their ninja on.

In a wild coincidence, the boys’ father is also the FBI. I’m entirely serious: when a police officer says “We have to call in the feds,” they call this one dude sitting alone in the office. This dude is, apparently, The Feds. So the cops and The Feds sit outside the park helplessly while the kids, Amanda, and their hero Dave Dragon kick some bad guy butt.

The emotional conflict comes from the eldest kids considering abandoning their ninjaness, as well as Rocky not wanting to hang around his younger brothers. These points are resolved by pretty much forgetting that the conflict was ever constructed. Also, Dave Dragon is about to be cancelled and he gets his ass handed to him by the bad guys a couple of times. His manhood is rejuvenated when he 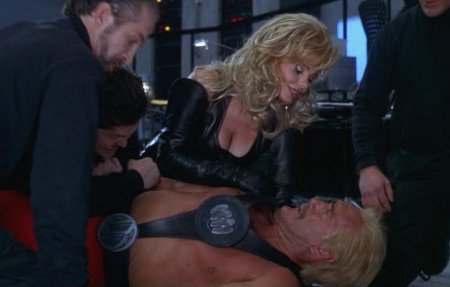 bucks up and kicks the ass of the bad guys, and his show is saved as well.

Speaking of rejuvenated manhood, at one point Medusa — in her skin tight black leather S&M gear — practically straddles Dave Dragon while telling him she’ll make him her boytoy. Frankly, and I say this with all the maturity and dignity I can muster, I would have much rather seen the movie that would have led to.

The brothers fight with all sorts of bad guys even after being told to let the adults handle it. Of course, the point of this kind of kids’ movie is that the kids get the better of the adults. Just like in cereal commercials. This is some pretty boring shit for adults to sit through, and while there was some token acknowledgment of parents by including actors they would recognize in the main adult roles, for the most part, adults are on their own. 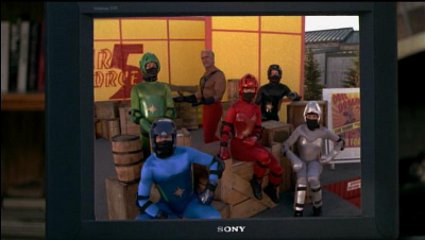 I was struck by how much of this movie showed something happening on a television. In every scene we see a kid watching TV, people talking through video uplinks, security cameras, computer screens, you name it. I’m sure the fact that every monitor and screen has the Sony brand clearly showing has absolutely nothing to do with it.

The child actors in this film are just awful. I wish I could say otherwise, but really, this is some of the worst acting I’ve ever seen, and I’ve seen nearly every episode of MST3K. The adults are often no better, but at least many of them have some experience behind them to make their roles tolerable. One kid (and I won’t name names here, because hey, I’m an evil bitch, but not that evil) could be seen mouthing everyone else’s lines. Another actor blatantly shoved a younger kid out of the scene in the most egregious example of scene stealing ever. But it wasn’t just the acting that sucked, oh no, the special effects were awful as well. Here you can see Rocky and Lothar atop 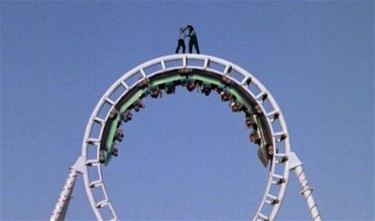 the roller coaster tracks. Note the size of Rocky and Lothar versus the size of the people in the coaster cars. Compare and contrast, if you will.

The finale involves the brothers battling with some of the henchmen while the two main girl characters, Rocky’s girlfriend and Amanda, get tied up and are in peril. Because they’re icky, icky girls. The bad guys make their way back to their old oil tanker out at sea, but the brothers blow it up with the help of two (2!) oxygen containers that were made into missiles.

Wow. I… I have no words. If this movie is any indication, kids don’t want to think about, let alone imagine, themselves in even moderately perilous action. Kids want to feel safe all the time, even in pretend. This is difficult for me to understand. I grew up in the 1970s and enjoyed a lot of children’s films, books, and shows which were allegedly more realistic when depicting real-world dangers. I don’t know if it was a short-lived trend or something based on the favored child psychology of the day, but this kid-oriented entertainment often featured children in actual peril. Kids like me were being burned in their schoolhouses on “Little House on the Prairie” or being chased by Nazis in “Bedknobs and Broomsticks.” We were yelled at and abused by a psychotic Willie Wonka, scared shitless by George C Scott in “Beauty and the Beast”, and fed a constant diet of funky psychedelia masquerading as education. The Three Investigators were pursued by adults who seemed ready to do actual harm. The concept of a child needing to feel safe, to know the characters he relates to on the screen will never truly be harmed, is foreign to me.

Then again, considering how scary Jim Varney’s face got a few times, maybe there was some legitimate peril.

This film is very much for little kids. Everything is all 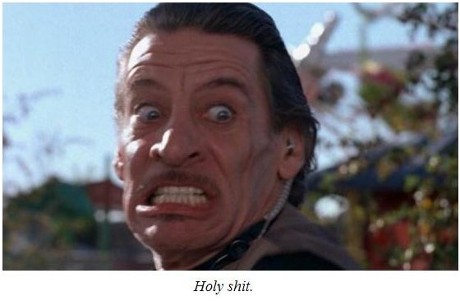 bright colors and flashing lights and short, easy to understand words. The slapstick comedy is embarrassingly lowbrow and involves a lot of crotches being crushed and hinders being kicked. I haven’t seen this many kicked butts since “Tillie’s Punctured Romance”. Characters are wild stereotypes, including the stupid fat guy, the funky Rastafarian, the stupid hick in overalls, and the goofy-looking dumb guy with a Steve Perry wig. Okay, well, I don’t know what that one’s about. The Steve Perry Wig Wearing Dude is apparently the voice of Crash Bandicoot, and the funny fat guy was in “Road House” — he’s the one who says “A polar bear fell on me” toward the end of the movie. Ah, memories.

There are a few good points to this movie:

2) The critical dialogue in the action-packed finale can be summed up with this line: “It’s no good! We need a 3-prong outlet!”

Now if you’ll excuse me, I’m gonna crawl into bed with a bottle of amaretto. Good day.