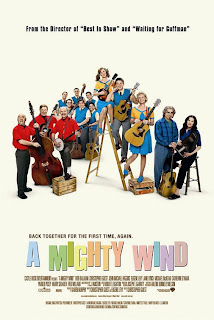 This post originally appeared on Film For the Soul during Ibetolis’ amazing Counting Down the Zeroes series, a celebration of films from the 2000s. The year of 2003 was a terrific one, so much so that it was difficult to decide which film I wanted to do for the year. Eventually deciding on a list of 6 or so, I had to have Ibetolis make the final decision for me. Decisions are hard.

“A Mighty Wind” is a documentary-style chronicle of a reunion concert honoring the recently-deceased Irving Steinbloom, folk musician manager in the 50s and 60s. Three acts, all former contractees with Steinbloom, are invited to the memorial performance and are featured in the film. Through archival footage, and interviews with the players as well as experts in the field, we’re given a glimpse into the life of folk musicians whose glory days are many decades behind them.

Irving’s son Jonathan (Bob Balaban) organizes the concert, booking The Folksmen (Michael McKean, Harry Shearer, and Christopher Guest) first. The Folksmen are a trio which had had one hit in the early 1960s, and continued to play in concerts and TV shows of the day with some lesser but still popular tunes. McKean, Shearer, and Guest are startlingly comfortable in their roles. Of course, this trio is also responsible for aging rockers Spinal Tap, but Guest and co-writer Eugene Levy were actually in folk bands in the 1960s. Shearer’s goofy baritone, McKean’s handsome and toupeed front man, and Guest’s overused tremolo all combine to make a really enjoyable group, one that is more novelty than standard though, which is why their single-hit status surprises no one. 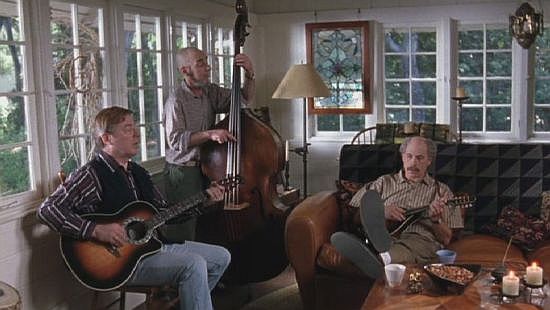 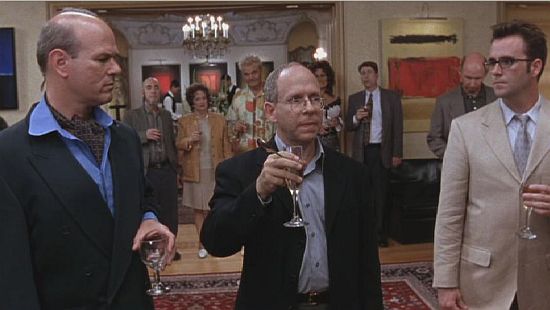 Finally, Steinbloom wants to book the most popular group of his father’s career, the sweetheart duo Mitch & Mickey (Eugene Levy and Catherine O’Hara). The couple went through a bitter split decades earlier and haven’t spoken since. Mickey is now remarried to a catheter salesman who enjoys toy trains and The Powerpuff Girls, and Mitch is barely holding it together after a series of rather public breakdowns. After a lot of cajoling, Mitch agrees to do the concert.

Mitch & Mickey are unquestionably the stars of this show. Mitch is bewildered, confused, perpetually stunned, and simply speaking is, for him, a true struggle. Yet Levy never overplays the character and we never laugh at Mitch because he’s a broken man. O’Hara imbues Mickey with a joy and sincerity that is captivating. Early on when Mickey is first being interviewed, O’Hara has this beautiful, compelling glint in her eyes that is nearly indescribable. 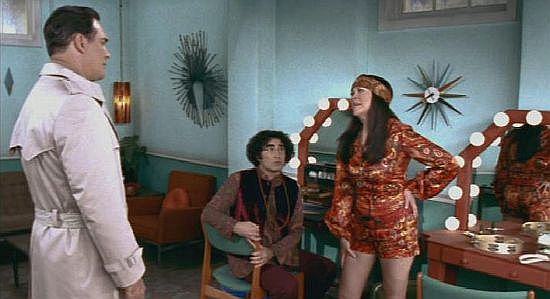 In an interview, Guest said “if people see Eugene Levy and Catherine O’Hara as a couple, then in the next movie you don’t want to do that again.” Far be it for me to tell an accomplished director that he’s wrong, but… he’s wrong. They were so great as a couple in “Best in Show”, and their chemistry in “A Mighty Wind” was remarkable and moving. I suggest an entire series of films featuring Levy and O’Hara as a couple. They could be hippies in one film, morticians in another — that would be a comedy, of course — and maybe a couple of high-powered New York attorneys. Cash in on the remake craze by casting them in a new version of “Adam’s Rib”! You can take those ideas for free, Mr. Guest. It’s my pleasure.

Mitch & Mickey were a phenomenon, appearing on TV shows, in concerts, and releasing a series of hit songs. Their most famous song was “Kiss At the End of the Rainbow”, a song which culminated in the sweethearts actually kissing as part of the act. A folk musician historian tells us that the power of that kiss in the public conscience could not be overstated. Through interviews we discover that Mitch’s and Mickey’s relationship began to crumble, ending during one particularly vicious fight in the recording studio. Mickey started yelling at Mitch, who snapped and completely lost it, ending up in a mental institution for a while.

We never know the catalyst of the fight, but Mitch toward the end of the film reveals that back in his heyday he would prepare for a concert by playing “find the cobra” with the motel’s chambermaid. So Mickey probably had a good reason for yelling at Mitch. Ultimately, the tension in the film derives from the unspoken feelings the two still have for each other, and wondering whether Mitch & Mickey will kiss during “Kiss At the End of the Rainbow” at the reunion concert. 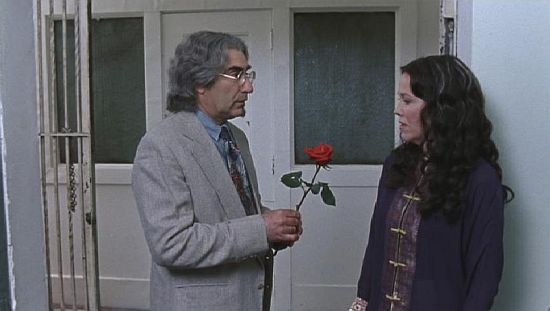 Christopher Guest is best when he works subtly. The players in “A Mighty Wind” approach their characters with a sincere directness that never becomes farce, never shows disdain. The moments of outlandishness are few, with characters revealing themselves as more neurotic and dysfunctional as the film goes on. Occasional wild silliness is laughed at but not lingered on, as though we were listening to an otherwise-sane friend tell one of his rare crazy stories. 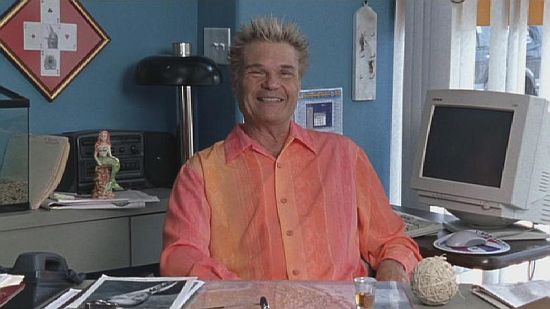 Comparatively, Guest’s earlier films often rely on caricature, ridiculous behavior and stereotype. His first outing, the legendary “This is Spinal Tap”, had some genuine emotion involved, although Guest has made it clear he considers the film to be about a group of “over-the-top idiots”. Guest also says he doesn’t like the term “mockumentary” for his films because they are all intended to be reality-based and not mock anyone, although I find it hard to reconcile that thought with Guest describing the real life folk musicians he knew as “cruel”, “self-important”, and “jealous”. Catherine O’Hara has said that while they don’t intend to mock, “I know we’re kidding ourselves, but it doesn’t feel [like mocking] when we’re doing it.”

If the members of Spinal Tap aren’t exactly idiots, the play participants in Guest’s next film “Waiting for Guffman” certainly were. The film serves up an ensemble of over-the-top performers who engage in unbelievable hijinks. There is more than a hint of ridicule hurled at provincial, uncultured Missouri rubes who simply don’t understand what real art is. His next film “Best in Show” was less about making fun of a group of people and more about a satirical insight into a world most people know little about, yet there was still a sense that the film was laughing at real-life breeders and showers, not with them. 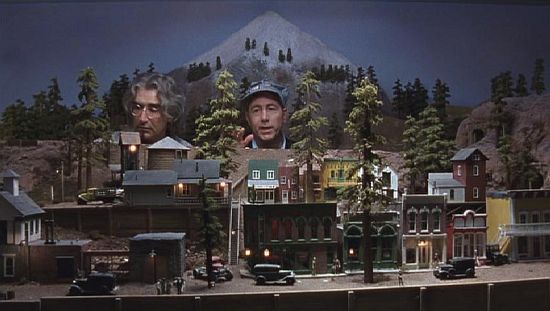 In almost stepping-stone fashion, Guest’s films have become more mature, more tolerant of the subject matter with each release. The folkies in “Mighty Wind” can hardly be characterized as over-the-top idiots. Yet Guest has said “I’m attracted to performers who are not very good or successful at what they do and yet take themselves enormously seriously. That’s the basis of nearly all my comedy.”

Perhaps this is the one place where “Mighty Wind” fails on some level. The bands aren’t bad at all, either in reality — the actors are accomplished in voice and instrument — or in fiction, where they all had some hits, especially the famous Mitch & Mickey. The music in the film is compelling, and coupled with the genre-accurate and entertaining music, the songs become wistful and enjoyable. The lyrics to most songs are obviously silly on paper, but when performed live the jokes get lost. Guest and Levy say on the DVD commentary that the two main jokes of the eponymous song were often overlooked by audiences because of their relative subtlety, a subtlety that belies Guest’s intention of creating cruel, self-important idiots. Whether Guest intended it or not, in “A Mighty Wind” he didn’t base the film on the premise that this group of people was ridiculous. These are endearing characters in an accurate, perceptive, sweet, and divinely funny film.