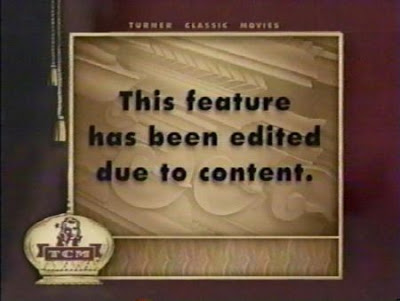 I thought this was interesting: Today I was going through some old VHS tapes to get to some “Ultra 7” episodes I recorded in about 1995 or 1996, when I found a copy of “Victor/Victoria” I’d recorded off TCM at the same time. Did you remember that TCM used to show edited versions of films? I didn’t! This notice (shown at left) appeared when “Victor/Victoria” aired, between Robert Osborne’s intro to the film and the movie itself.

Again, I can’t specifically date this, but the other things on the tape make me think this was about the summer of 1995. (EDIT: TV.com notes that “Ultra 7” started showing on TNT again back in 1994, meaning this movie could have been taped as early as 1994. However, we didn’t get TCM on cable until it had been around for at least several months, so I’m sticking with 1995 for a date. And as a serious tangent, I’d like to point out that an Internet friend of mine started a write-in campaign to get TNT to show “Ultra 7” and I participated, so I’d like to think I was part of the reason they showed the reruns. Ha!)

What’s interesting is that someone who claimed to work for TCM posted to Usenet at around the same time, i.e. the mid-1990s, I think to alt.movies.silent — these posts aren’t archived, this was in the days before Deja News or Google Groups — and they insisted movies weren’t shown edited. Any time an edited print was shown, they said, it was a case of the wrong print being shown and not a case of editing. 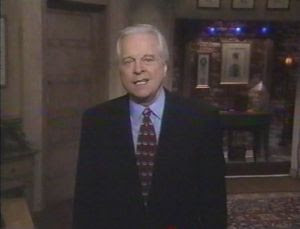 I’ve heard this since then so, even if this was someone just pretending to be a TCM employee, it’s obvious that TCM’s policy now is to show unedited copies of films. And as I’ve mentioned before, TCM back in the mid-1990s once showed a half-edited print of “Rich and Famous” which had to have been an error. Why else edit some profanity but not all?

But this intro warning shows that TCM once did show purposely edited for content prints on their channel. How odd.

And because I felt like it, here is a really bad screencap of Bob on the outro to this showing of “Victor/Victoria”. It was a 14-ish year old VHS tape, recorded on the worst quality possible, so this was the best I could do.