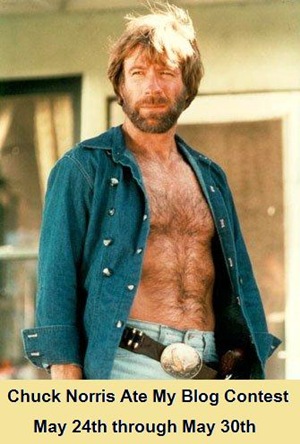 My Chuck Norris Ate My Blog Contest entry is the 1982 semi-horror flick “Silent Rage.” CNAMB’s list of submissions is here!

Originally, I had planned to watch “Code of Silence,” but when I told my husband this he asked “Hey, is that the one with a zombie?” There’s a Chuck Norris movie… with a zombie? Oh, I had to see that. However, it’s equivocal whether the bad guy in “Silent Rage” is really a zombie or not. The movie’s promotional material seems to take great pains to frame him as a product of genetic science gone wrong, but genetics were a bigger marketing ticket than zombies back in the early 1980s, so I’m not fully willing to dismiss the zombie theory.

The film — which is sadly in 1.33:1 ratio on the DVD — opens with boarding house roomer John Kirby having a freak out, on the phone with his doc and sweating heavily. An annoying landlady and some screaming kids drive him a bit battier than he probably would have been otherwise, so of course he walks out into the back yard, grabs an axe, and starts choppin’ the people around him. 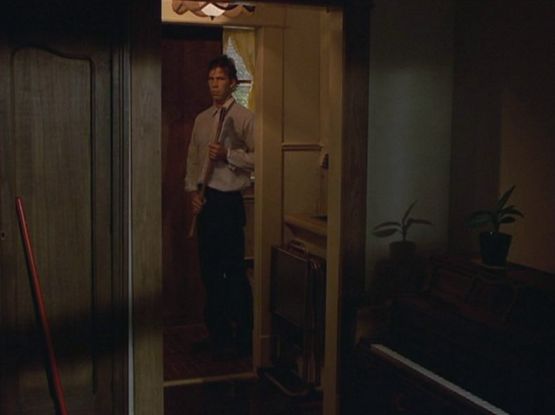 Not the kids, though. Chuck wouldn’t have stood for that. Kids don’t get chopped into chum in his movies no matter how much they might deserve it. After Kirby makes quick mincemeat of a fellow boarder and the landlady, our hero arrives: 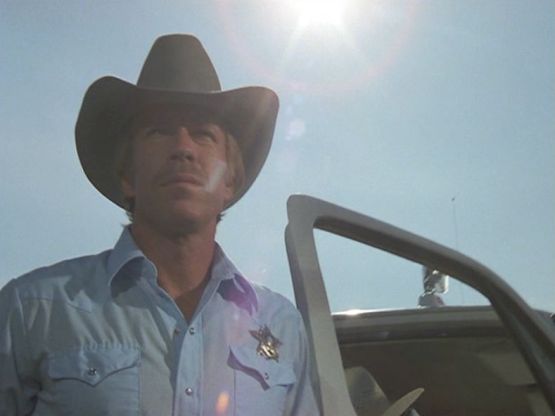 At first, it’s tedious watching Sheriff Dan just mosey through the murder house, but actual tension builds for a precious few moments. In what would become a running theme in this film, the tension is wasted on a rather weak surprise entrance from killer axe dude. Sheriff Dan chases Kirby through a field behind the house, gets him cuffed, but Kirby has superhuman strength (d’oh) and breaks his chains. Several deputies empty their shotguns into him just as Kirby’s doctor (Ron Silver) arrives on the scene.

At this point I should mention that all the deputies have the same outfit: Light blue Oxford shirts and khakis. But not Chuck, oh no, he’s in Action Jeans! Jeans that he models several times throughout the film by unnecessarily propping his leg up on something while chatting with another actor. 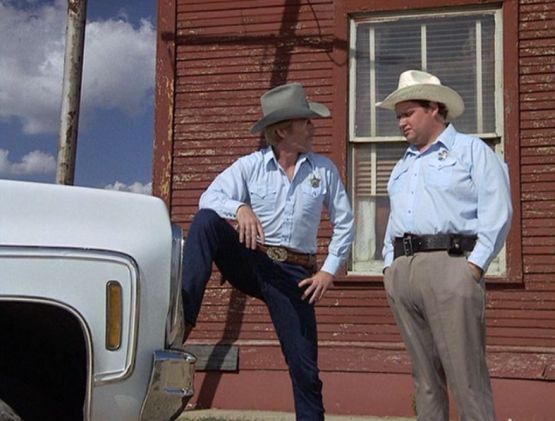 But here’s the kicker: The doctors have been working on a genetic serum called Mytagen 35 [2] and Phil wants to try it on the brain-dead Kirby. Surprise surprise, it works, but Tom ain’t fer it, he’s agin’ it, so they pull the plug on Kirby… until Tom leaves, then they inject him again with a few gallons of Mytagen 35 and hide him in a basement laboratory while telling everyone else he’s dead. Kirby heals rapidly while remaining unconscious, and Phil and Paul think he’s still brain dead. Ha! 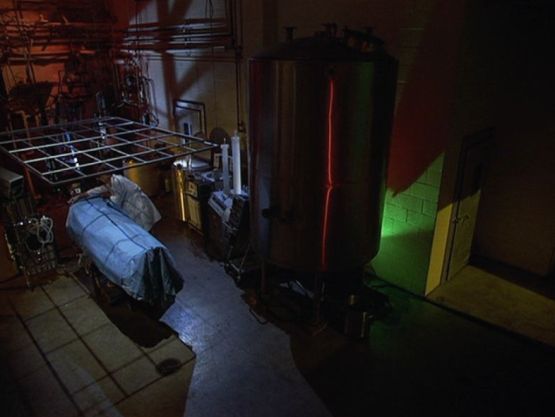 Meanwhile, Tom’s sister Alison runs into Sheriff Dan, and we discover they used to date several years earlier. She’s mad at him but of course sleeps with him immediately after reconnecting, thus starting a really insipid romantic plot line that just does not work on any level, unless “boring the whole damn audience to tears” was their goal.

So Kirby escapes the hospital, as the technically-dead bodies of psychotic criminals who have been brought back to life through artificial means are wont to do, and he kills Dr. Tom and his wife. The wife hiding in the attic from Kirby is the best part of the film, by the way. Alison comes home to discover their bodies and screams for a few thousand hours while Ron Silver hangs on the door trying really hard not to laugh while he’s supposed to be playing dead. It’s actually quite endearing, kind of like Craig Reynolds in “The Case of the Lucky Legs”, so I can’t hate on him. 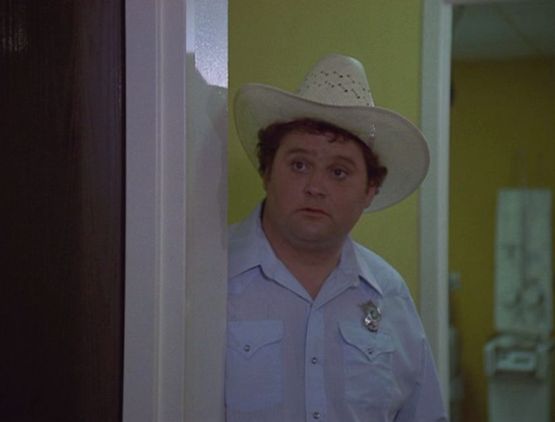 Thus commences the part of the film where Sheriff Dan goes to find Kirby and stop him. Kirby makes short work of Drs. Phil and Paul and even chubby sidekick Stephen Furst, which upset me more than it should have. Kirby is shot, blown up, burnt, and he still keeps comin’, but of course Chuck’s martial arts save the day. Which, look, I don’t care if you’re Mr. Bruce Freakin’ Lee, if being explodiated doesn’t kill you, several kicks to the torso won’t kill you, either. Guess that’s why the final freeze frame of the movie has Kirby jumping up out of the water he was allegedly floating about dead in, although I got the impression that was more about possible sequels than for authenticity.

“Silent Rage” was so much better than I expected. It’s the kind of bad B movie I like to watch voluntarily, so I’m pleased I saw it. It was also fun to pick out the visual and plot elements stolen directly from other films: “Apocalypse Now,” “Night of the Living Dead,” “Way of the Dragon” (aka “Return of the Dragon”), “The Shining,” and of course “Frankenstein.” There are plenty of breasts to be had and occasional gratuitous beefcake: 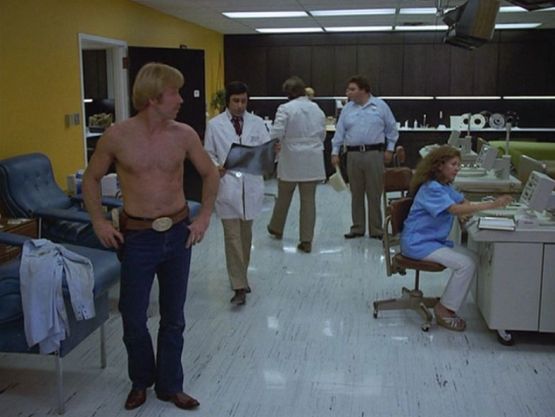 What makes a really good B movie is the stellar supporting cast. I like Chuck, I really do, but the poor guy has one facial expression when in front of the camera. It’s beyond awesome at one moment in “Missing in Action” when he tries to smile and just kind of squinches up half his face instead, but in “Silent Rage” it is a liability, as horror films rely so much on extreme emotion that Chuck comes across as a wee bit miscast. Then again, when they killed off his sidekick, his stone cold expression worked pretty well, ’cause you knew some maybe-zombie butt was about to get kicked.

[2] Maybe. It’s an invented word; I do not know how to spell it. Besides, doctors never pronounce the names of medicines correctly anyway. This is truth.