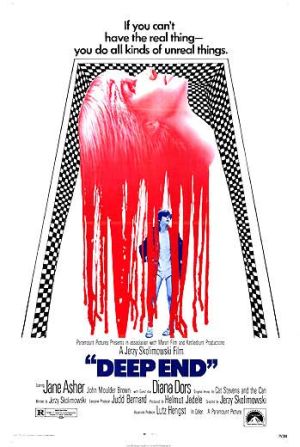 Jerzy Skolimowski’s Deep End (1970) is messed up.  I know that sounds weak, that I should properly be calling it “disturbing” or “dark,” but those words gives the film an air of propriety that I don’t think even Skolimowski intended.

I caught Deep End a few minutes into it the first time it was on TCM and, without having seen the beginning, I was convinced that this was another example of lackluster shock film-making of the era. On a second and complete viewing, I confess my first impression was more cynical than it should have been.

Now, I think Skolimowski fully intended his characters in Deep End to be so selfish and confused that they appeared soulless. The film, however, seems to be exploring what happens when an excitable teen boy is mistreated and lost in the swinging, sexually free London of the early 1970s. Early in the film, you see the beginnings of what young Mike (John Moulder-Brown) has had to go through. 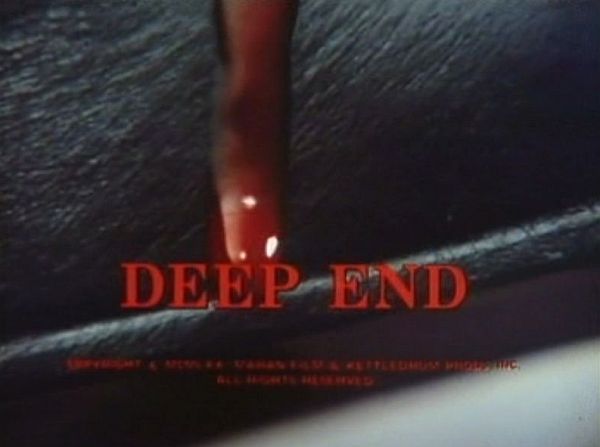 However, the transformational and abusive treatment he endures contains an undeniable undercurrent of sexism, and is often based on the alleged “fact” that women are out of control and need to be put in their place. There is a distinct difference between the female and male characters that underlines this problem. The primary male characters are Mike, the swimming instructor (Karl Michael Vogler) and Susan’s fiance (Christopher Sandford). The swimming instructor is a cad who gropes his teen girl students; the fiance is bland. And that’s it, that’s the extent of their offensiveness.

But Mike is the hero, and at the end of the film after he’s played a ton of passive aggressive mind games with Susan (Jane Asher) while helping her to find the lost diamond from her engagement ring, it escalates to a moment where she uses the lure of sex to get the diamond back. When she tries to walk off after getting the diamond, Mike kills her. She floats dead in the pool, her blood forming slo-mo ribbons around them, as he has sex with her corpse. Our hero, ladies and gentlemen.

Keep in mind that Susan is portrayed as deserving this, because she’s been an “immature tart”, a jackass to Mike by saying mean things, she’s a cocktease, and she may even be a whore who dances nude! It’s true! So clearly she deserves to die.

And Diana Dors, sadly, is part of this anti-woman theme. She plays a 40-something woman, a little overweight, her platinum dye job going south, her cheap department-store clothes unflattering. 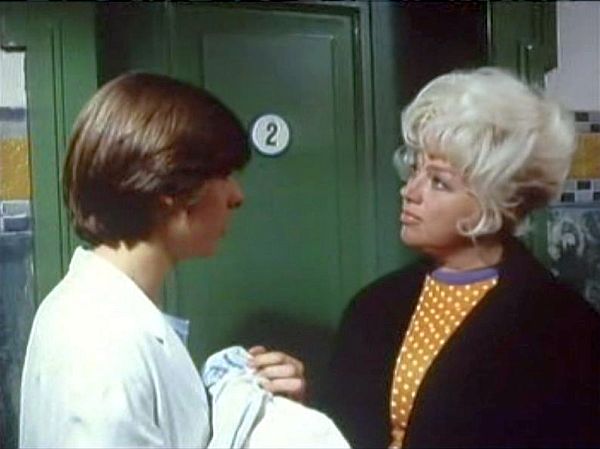 Mike works at a public bathhouse with Susan, and it is understood that they will each take some clients who come in for some kind of non-penetrative sexual release. Mike is 15 years old, I believe, or perhaps 16; he has quit school to go to work because his family needs the money. His first female client-in-quotation-marks is played by Diana Dors, and she, to put a fine point on it, sexually abuses him. 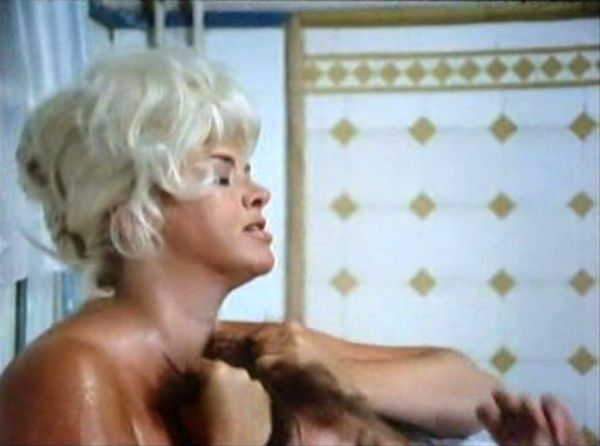 She gets off on shoving an unwilling Mike around, pulling his hair, and forcing his head against her breasts while she shouts some double entendre football talk. It’s probably supposed to be funny; however, it’s the beginning of the abuse Mike takes which ultimately leads him to murder.

I would like to point you all to an excellent reflection on the film here at Britmovie by D.R. Shimon. It’s positive, it’s insightful, and it’s well worth the read.