Today’s entry is for the John Huston Blogathon, hosted by Adam at Icebox Movies, running from August 5th through 12th. Both the submissions and Adam’s own entries have been exceptional thus far, and more are coming in the days ahead. I highly recommend checking them out! 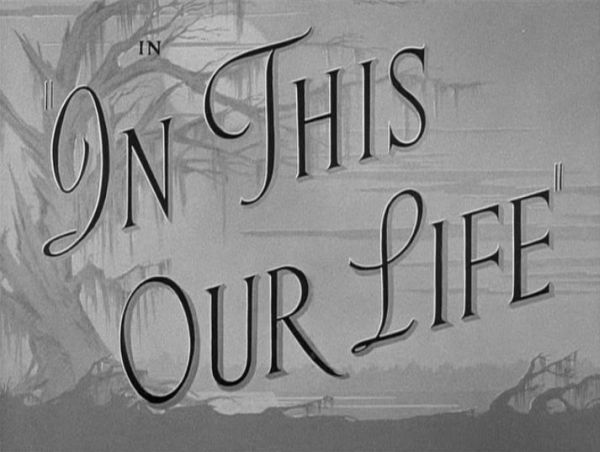 Nobody likes “In This Our Life” (1942). Oh sure, some people enjoy the camp, or like it because Bette Davis plays such a rotten woman, but that’s as far as it goes. I found some really unfortunate reviews of ITOL online, reviews that had major facts wrong, that described the movie as “icky” or “just okay” or even “obnoxious”, that repeated long-discredited rumors about cameos. ITOL doesn’t get a lot of respect, and I — self-appointed champion of the underdog — wanted to change that.

About the cameos: There are no cameos in this film save Walter Huston as a bartender. I’ve got a screencap of the guys in the bar, people, so don’t push me on this. 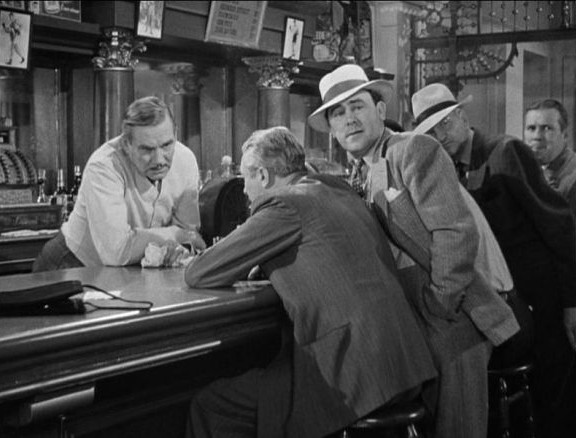 ITOL is not a bad film, but it is an odd film, as it’s supposed to be a melodrama in the midst of the languid American South, not like you would realize this without being told. No one bothers with a Southern accent save Billie Burke, and the exterior shots of the house are so unconvincing they look as though they were shot for a New England area film like “Arsenic and Old Lace” instead. It’s undeniably a standard Warner Bros. film, albeit one directed by a decidedly new director that WB had not seen before, and with a handful of performances and plot points that were quite progressive for the day. According to Jeanine Basinger, the noted film critic who provides the DVD commentary, it was the idea of a black man being taken seriously that made him decide to do the script, and I suspect Huston was intrigued by the naughty nature of the incestuous relationship between Stanley and her rich uncle William.

Stanley (Bette) is engaged to Craig (George Brent) but decides to run off with her sister Roy’s husband instead. Roy (Olivia de Havilland) is responsible, calm, and even a little meek at first, and the relationship between the two sisters mimics the divide throughout the entire family. Stanley, her mother, and her uncle William (Charles Coburn) are the selfish side of the family, to varying degrees and for varying reasons. Roy and her father Asa are the calmer, more philosophical side. William has taken the family business from his brother Asa through ruthlessness and greed; Stanley has taken Peter from her sister in the same way. 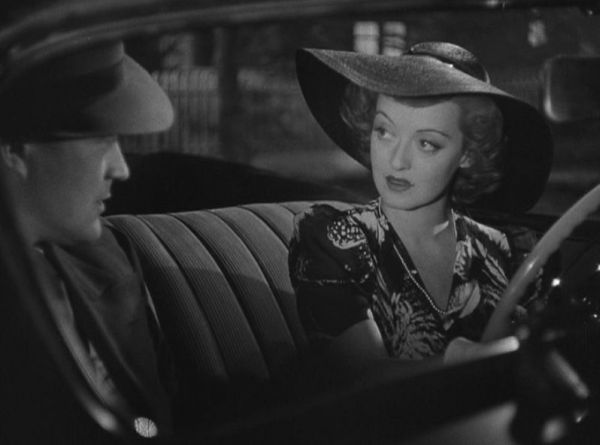 Stanley is bad. One of the best parts of the DVD commentary track is Ms. Basinger’s “Oooh, she’s sooooo bad!” at Stanley’s antics. Indeed, Stanley is so bad that, after she drives Peter to suicide, she returns to the family home and decides to steal Craig back now that he is Roy’s partner. The family employs a black maid, Minerva (Hattie McDaniel), whose son Parry (Ernest Anderson) helps around the house and in Roy’s shop, but is also studying to be a lawyer. When Stanley drunkenly runs over a mother and her child, she blames Perry. Yeah, that’s bad. 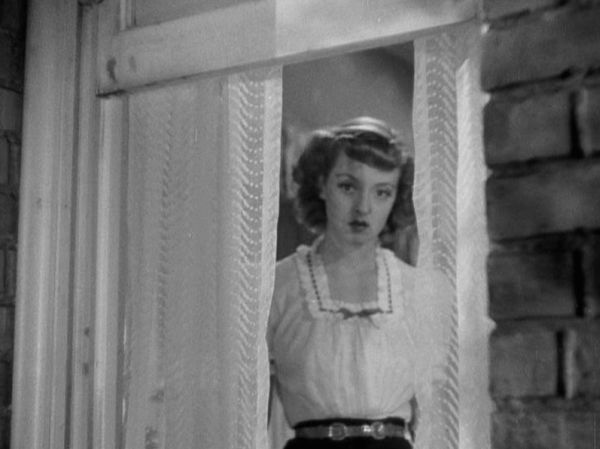 No discussion of ITOL is complete without mentioning Bette Davis’ appearance. Many comment on her garish outfits, but I have to say I love the patterned dress she puts on the day she decides she won’t wear mourning black anymore. Much is also made of Bette’s makeup, and I think the people who criticize it are (a) not familiar with Bette’s look from her early WB days and (b) old fuddy duddies. Many call the makeup “heavy”. Pfft. You think that’s heavy, go watch her in “Fashions of 1934”. But the makeup is just a little trampy. It’s designed to attract men. The wide eyes made larger, massive curled lashes, the eyebrows slightly higher, the lips made fuller yet narrowed into a bow. 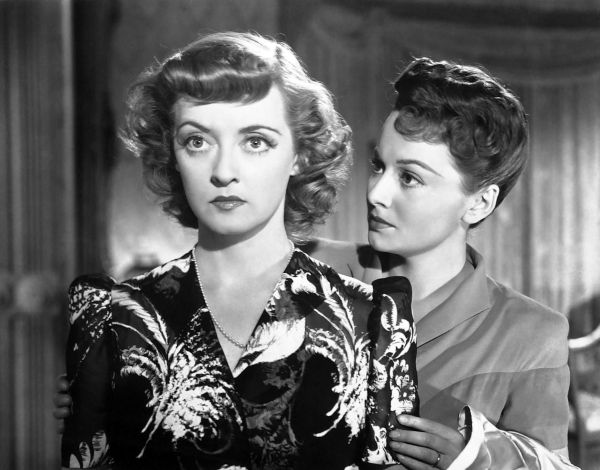 For a little comparison, see her iconic look in “Jezebel” (both pictures courtesy Dr. Macro): 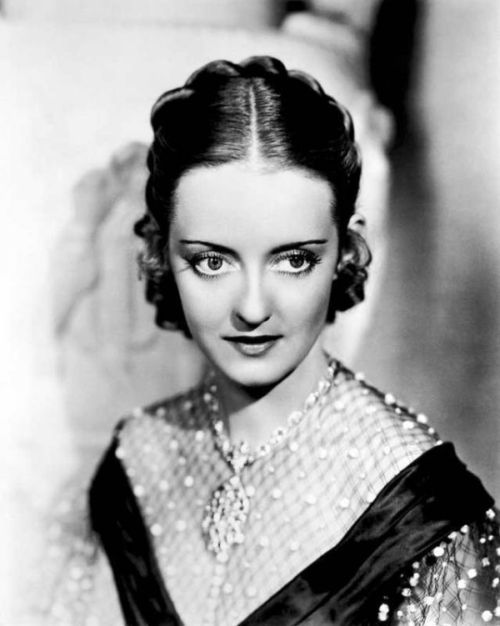 I think the ITOL look is marvelous.

John Huston was told by the studio to tone Bette down. Huston refused. He was fascinated by Bette’s performance and knew she had it under control. At the same time, Huston balanced Bette by focusing on the meeker sister in closeups and making sure to include at least two actors in every shot. There is very little back and forth editing from face to face during discussions, and Bette’s performance really does work well in the context of a typical Huston ensemble piece. But Bette wasn’t happy with the movie. She had been sick during the filming, catching the same virus that made her husband violently ill and exacerbating it with overwork and long hours. She didn’t like ensemble pieces and several at WB claimed she was livid because de Havilland got all the closeups, although Bette liked and respected de Havilland, so her jealousy may be more anecdotal than anything. 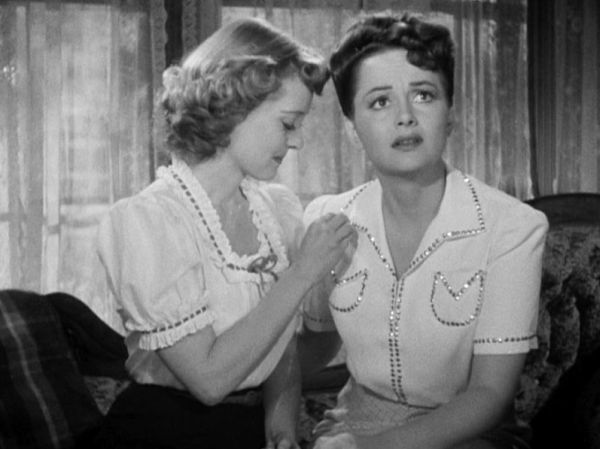 It should be noted that this was Ernest Anderson’s first film, and his performance is unquestionably one of the highlights. It’s a realistic performance, grounded and honest, and the scene where he is in jail is undeniably great. He steals the scene, so much so that Bette modifies her performance to match his, and poor George Brent is completely forgotten. Anderson’s career was sadly typical for an actor of color, as after ITOL he immediately went on to small roles of porters, valets, and the ubiquitous “black man”. It’s sad, and none of the usual classic film buff excuses of “but it was a different time back then” makes it better. Yeah, it was a different time. It was a sad time, and pretending like it didn’t happen now, when we all allegedly know better, makes it worse. 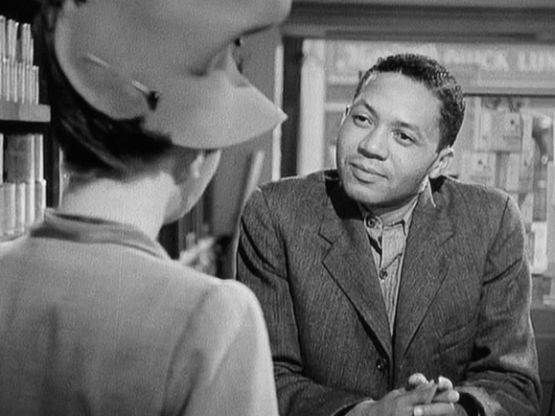 Ted Naron at A Blog of My Own talks about Anderson and ITOL in an excellent blog entry I highly recommend. Ironically, Ted notes that there are precious few pictures of Anderson on the web, and of course I lost my single screencap of Anderson when my lack of organizational skills caught up with me. I hope Ted forgives me for borrowing one of his screencaps.

The Huston blogathon is about Huston and the underlying question: Was Huston an auteur? If one is looking for an answer to the auteur question, ITOL is probably the worst Huston film to pick, as some scenes were directed by Raoul Walsh when Huston went off to war. That said, I don’t subscribe much to the auteur theory, although I respect it as a critical philosophy. To me, the idea that art requires a single author/creator to be considered art, as Film Reference explains the theory, seems absurd. There is no need to ascribe a single author to works of collaborative art. Further, in regards to movies, you can find unifying themes and styles between movies by following many of the significant players. You can find similarities in Huston films, but also in Bette Davis films, Howard Koch films, Ernie Haller films, or even Warner Bros. films. 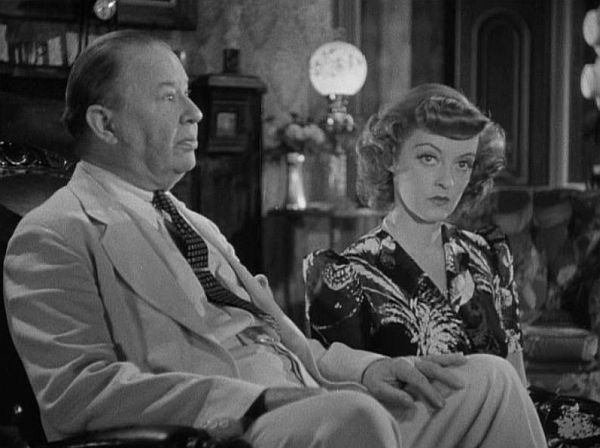 That’s where I think “In This Our Life” fits in Huston’s oeuvre, as a collaborative effort of Warner Bros. actors and crew under the direction of someone relatively new to the field of filmmaking. The years between “The Maltese Falcon” and “Treasure of the Sierra Madre” were years where Huston was clearly experimenting. Someone on Usenet once dismissed ITOL as Huston “playing around,” but I disagree. This was a man playing with perceptions, already discovering how to best utilize strong personalities and balance them with more moderate screen presences. George Brent, who spent most of his career on screen being bland, momentarily breaks the ol’ stoneface routine when he’s trying to explain why it’s okay that Stanley is lying about the accident. He can’t explain why, and for once you see Brent act out the emotional process on his face: That’s Huston. 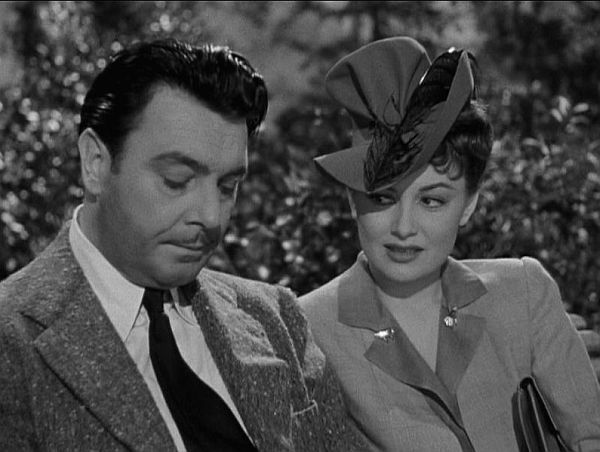 Remember, though, it’s all collaborative. Huston could not have achieved that unless he had Brent’s years of experience and specific acting style. Huston seems to have often let his actors go on their own, relying on their abilities rather than trying to hammer them into something different a la Preminger, so maybe he wouldn’t have fit the definition of auteur anyway.

Our blogathon host Andy at Icebox Movies says as much: “He has never been regarded as much of an auteur: Andrew Sarris and Molly Haskell don’t care much for him, nor did Truffaut and Godard. His career is not dominated by one single auteristic theme, unless you could try to make a case for ‘male angst’.” That passage is not only true, but it highlights another problem I have with the auteur theory: That a director should strive to be an auteur, that being such means one has reached the pinnacle of their career. For critics like Truffaut to dismiss Huston in part because he was not an auteur is missing the point of collaborative art, and it’s exceedingly unfair.