This post is part of the Summer Movie Blog-A-Thon hosted by Kate of Silents and Talkies.

As a kid growing up in Missouri and later Kansas (ugh), I didn’t watch a lot of films. I saw maybe 10 films in the theater before I was in high school and able to occasionally go on a date or with friends to movies. As a kid, most of the movies I watched were of the CBS Saturday Night movie variety. My biggest memories are of The Omen and The Amityville Horror, both of which scared the hell out of me. I also recall coming home early on Halloween night in 1980:

Behold! Undeniable proof that Halloween happened in 1980! I still have that chair and small table, and am in fact sitting between them right now; they’re part of my office furniture. Alas, I no longer have the large stuffed poodle.

I curtailed my candy plundering activities that night specifically to get home for the Jeff Goldblum Legend of Sleepy Hollow, and I really wanted to post about that, but finding a copy is depressing and it is expensive, two words I hate.

For the most part, any movies I saw during this era were made for television or showing on TV in edited form. One exception, maybe the only exception, was getting to see Raiders of the Lost Ark in Camdenton, Missouri, a few months after my Halloween Goldblum-hap. (It’s like a mishap, except involving Jeff Goldblum.) It was because we saw the first film of the trilogy that my parents drove us to see the sequel Indiana Jones and the Temple of Doom, starring Harrison Ford, Jonathan Ke Quan, and Kate Capshaw’s spiral perm. 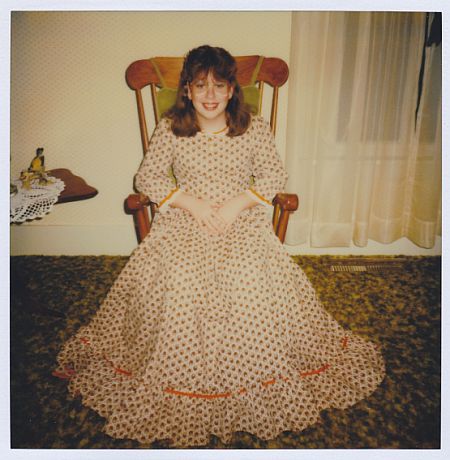 Proof I once was young: This is me, about 3 months or so before seeing Temple of Doom. I’m all gussied up for the local grade school production of “How the West Was Really Won.” Looking through the family photo albums was an experience. If the pictures are to be believed, puberty hit me hard and fast, like Brannigan’s Law. 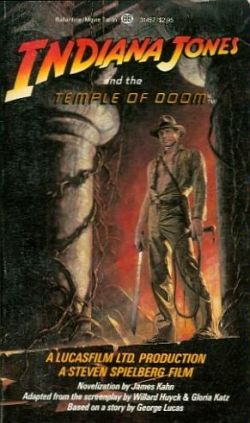 Suddenly, I went from barely remembering who Harrison Ford was to realizing he was smokin’ hot. Despite not liking the movie much, I was still obsessed with it — a conflict I suspect many 13-year-old girls go through — and I bought the novelization at K-Mart a few weeks later. I liked the book a lot more than the movie, mostly because of the cover, but also because it toned down the irritating qualities of pretty much everyone in the film.

Indiana Jones and the Temple of Doom doesn’t really leave off where Raiders of the Lost Ark ended, in part because it’s technically a prequel. Temple mainly takes the character of Indiana Jones (Harrison Ford) and removes all the drama, backstory, characterization, and just plops him into another adventure. This was deliberate, an attempt at both parody and homage of movie serials from the 1930s, and since I grew up and actually watched a few thousand movies from that era, I thought Temple would be fun to watch now.

Yeah, and I think it would be fun to run a newspaper.

In Temple of Doom, Jones finds himself stranded in India with chorus girl Wilhelmina “Willie” Scott (Kate Capshaw) and a young Asian boy he calls Short Round (Jonathan Ke Quan). Locals say their children have been kidnapped and three important stones used on religious rituals have disappeared. Jones pretty much turns into the Great White Hope as he saves all these savage brown people from being so, well, gross and lowly and gross.

Temple sadly is not only as full of bigoted junk as one of those horrible 1940s movie serials, it’s worse, because the filmmakers apparently thought that was funny. Even at age 13, in the middle of Kansas in 1984, I knew the movie was a racist, sexist piece of crap. The audience seemed to know, too. Well, to be honest, the audience was already pissed off after the opening sequence with the life raft and the airplane. There were audible groans and the laughter garnered wasn’t the hipster ironic laughter the movie was shooting for, but the “were they trying to parody something?” laughter of disbelief.

A man in the audience commented to the effect of “What the shit is this?” when Willie started whining incessantly, while a lady to my right complained that women in old movies weren’t like this. A girl at school said her mom had gone to see the film with friends and wouldn’t let her kids go see it because it was racist and violent.

The irritating, complaining, completely useless character of Willie is supposed to be pastiche of female characters from the 1930s, but I think most classic film fans know how wrong that is. The character goes beyond exaggeration and into an extreme that is downright mystifying. I can recall a few characters from post-WWII serials that vaguely resemble Willie, but nothing from the 1930s.

The racism was so blatant that, as a kid, I couldn’t figure out what was even going on in some parts of the film. It didn’t make any sense for all these Sri Lankans to constantly gather around the white people and cheer for no reason. Being unfamiliar with colonialism, I started to wonder if Indiana Jones’ reputation was so great that they knew him by sight. Then members of the dangerous cult just stood there waving their fists in impotent rage across a cavern as they watched Indy take out the bad guys, with not one of them being smart enough to try to get to the other side through the back cave entrances. That was odd. And how come none of those hundreds of kids in slavery even thought about using their pickaxes to break free? Why does some white guy need to show up to fix everything?

There is an excellent essay on the issue of racism and colonialism in the film here at The Film Journal by Dr. Kaizaad Kotwal. If you’re interested in the issue, I highly recommend this essay. Dr. Kotwal holds that Temple of Doom is not political through intention, but the film becomes political because of Spielberg’s willful misrepresentations of race and religion, and I don’t think anyone can really disagree with that. The film, for me, is also a good example of why examining bigotry in old films is important today: When people fail to examine past prejudice and simply assume things are different now, they create works like Temple of Doom. There’s no awareness that using whites in body paint to play Indians isn’t any better than the yellowface common in the 1920s and 30s, for example.

On the surface, though, the film occasionally succeeds at imitation. Willie is always in fabulous gowns or in Indy’s suspiciously clean white tux. Her hair changes from scene to scene. Indy goes from hot leather-wearin’ adventurer to a bow-tied professor with a mustache and back again, donning and losing shirts at fascinating speed. There was at least an attempt at making Willie a bit of a wisecracking dame, and the child sidekick was appropriately annoying.

Sometimes, the movie is even funny.

About 12 minutes into this movie I realized I had made a terrible, terrible mistake. I didn’t go into this blogathon with the intention of being negative. The problem, I think, is that I went to see popular movies but not good movies when I was a kid, thanks to the Hollywood summer blockbuster phenomenon. Also, Temple left me feeling a little betrayed. As a kid I loved the idea of a professor turning into an adventurer, loved the 1930s feel of Raiders the realism mixed with fantastic horror at the end. Temple just didn’t even try.