For anyone interested in using these posts for research, please read the note at the bottom of the page. Thank you.

This post originally appeared at https://www.shebloggedbynight.com/2010/11/marie-prevost-project-1-those-bitter.html and a copy can still be found at the Internet Archive here.

Sharp-eyed readers will note that this is titled Marie Prevost Project #1 when we’ve already had Project #1.  Starting now, I will be going through Marie Prevost films for the Project in chronological order, including those films of hers that do not survive or that I do not have copies of, and as such I’m numbering the posts chronologically. Previous posts in the Project will eventually be renumbered to reflect the correct order. If you want a refresher on the Marie Prevost Project, start here.

We live in a great time, my friends. Too many silents are lost — most of them, actually — yet through the miracle of home video and cable television, we have access to thousands of the titles that still exist. It’s because of this that I was lucky enough to discover that both Marie’s first and last films still survive and, surprisingly, are readily available.

According to Charles Foster’s excellent Stardust and Shadows: Canadians in Early Hollywood, Marie moved with the family to Almeda, California, at age 6. At 14, she graduated from high school and went to work in a law firm. The story sister Peg told decades later was that Marie, a 17-year-old law secretary, delivered law papers to Mack Sennett Studios one afternoon and was coerced to be in a short as a background player.  She was told to sit in a chair in the background of a scene and the chair, without warning, collapsed from under her.  Peg recounts that she later saw this scene and “Marie just bubbled.” Marie became an official Bathing Beauty the next day.

I mention all this because “Those Bitter Sweets” (1915) is considered Marie’s first film, yet there is no collapsing chair or table. In fact, I’m not even sure I can find her in the film, and I’ve spent serious amounts of time trying to decipher which blurry lady in this short is Marie, if any.

There are plenty of promotional pictures of Marie early in her career (again, see here), and she was recognizable as Marie Prevost from the very beginning, so it should be very easy to see her in “Those Bitter Sweets.” But it’s not. The IMDb lists Mae Busch as female lead and four bit player females in the cast, yet there are six bit parts: Four Beauties and two girls at the drugstore soda fountain behind Mae and Al St. John. You can see the Beauties well in certain scenes, well enough to rule them all out as Marie, although I think many assume the lady in the middle in the screencap below is Marie:

I don’t think that’s her, but hey, I can’t figure out who any of them are.  Some guesses:  I thought the third lady was Phyllis Haver, but after seeing this photo of Virginia Fox from the 1940s here, I decided it might be Virginia.   Also, I found this photo (click to embiggen) and I would say at least two of the ladies there are Beauties in my screencap.   However, I ultimately have no idea who these women are.

And hey, let me show you a picture I have of Marie from an old newspaper article from 1920: 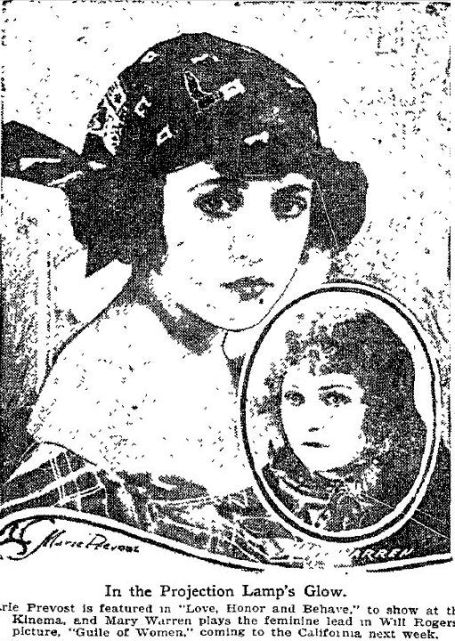 That doesn’t look like Marie to me, but it does look like the lady in “Those Bitter Sweets”!  This is when I seriously considered chewing my own foot off in frustration. 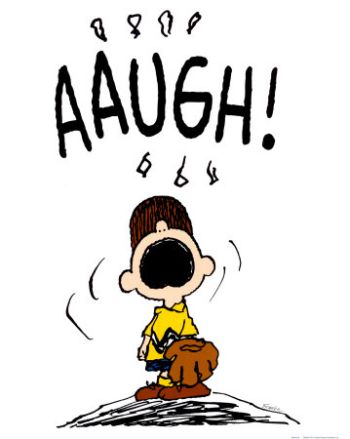 If that Beauty in the screencap isn’t her, then the closest match for Marie would be the lady sitting behind Mae and Al to the far left:

She’s got Marie’s chin and, if you watch her behavior, she moves like Marie. That’s the best I can do. I can’t tell you what film Peg Prevost was talking about in that interview, but it wasn’t “Those Bitter Sweets” unless there is missing footage.

“Those Bitter Sweets” is pretty good, though, and if you dig on old timey comedy shorts, you’ll like this.  It’s coherent and funny enough I found myself laughing out loud several times.   The plot, in short, is about two men who are fighting over Mae Busch. Harry McCoy, the loser, tries to get even by poisoning a box of candy and giving it to Mae. Mae doesn’t eat the candy, instead giving it to a friend.  Harry immediately changes his mind about that whole murder thing and tells Mae the candy is poisoned. Realizing the lady with the candy has driven off to the beach with a group of friends, everyone within 50 feet panics in Sennett-approved fashion to stop them from eating EVIL CANDY OF DEATH. Slapstick happens along the way, Mae Busch is effortlessly charming, and the story is clear, coherent, and edited well. I’m new to Keystone shorts and Mack Sennett, but I’ve discovered that a bunch of these quickie shorts don’t make a damn bit of sense and are sloppily made, to boot. In TBS, there are only two instances where crew members accidentally moseyed into the shot, for example. It’s very impressive.

You can see it online from a festival showing that was uploaded here on YouTube.

***
If you’re interested in using these posts for research, please note the following:
1) You can use my blog posts for sources, but they must be credited in footnotes or bibliography (as should any book, blog, magazine, or other source). You cannot just cut and paste sections of my blog into your own work. Please know that I will not just ignore copyright infringement, should it occur.
2) There may be errors in my blog posts. You’re responsible for doing your own research and verifying anything you read.
3) I will not help you with your Marie Prevost research. Please don’t ask.
4) I own some memorabilia, photos, archival docs, etc., but I do not lend them out for any reason. Please don’t ask.
5) Despite any claim you may have heard to the contrary, I have not assisted nor collaborated with anyone in their book or article on Marie Prevost.