For anyone interested in using these posts as research, please read the note at the bottom of the page. Thank you.

Note: The pictures that originally came with this post were lost in a server move. They will be eventually restored. Thanks!

We just visited “Those Bitter Sweets,” allegedly Marie’s first film. Was it? Hell if I know.

This #2 post in the Project is the first of probably several posts where I can do nothing but list a bunch of Marie’s films that aren’t readily available or are lost, so take a seat and buckle yourselves in. It’s gonna be a long one.

I would like to note briefly that someone in 2008 copied the IMDb listing for Marie here, and you’ll see “The Locked Door” (1929) isn’t listed. As I mentioned before, when I started this project in 2008, that mistake was not on the IMDb. I’m sure someone saw the film on TCM when it showed in late 2008, thought Betty Bronson was Marie Prevost, and added her as “roomate” (sic) because Bronson’s character was indeed William “Stage” Boyd’s roommate and sister in the film. Now that it’s there, I can’t seem to get the IMDb to remove it.

This is something I’ve talked about before, and I’m repeating myself for a reason: This is the perfect example to illustrate why this project is so difficult. There is precious little about Marie available and what’s out there is often wrong. This is especially true about her death, thanks to Kenneth “No-Talent Plastic Face” Anger and Nick “What’s An Encyclopedia?” Lowe.

It was the public perception of Marie that caused my interest in her in the first place. What I discovered when I was knee-deep in research was that Marie was one of the most popular actresses of the time, appearing on magazine covers consistently throughout the 1920s at an increasing rate, culminating in an average of once a month from late 1924 to early 1928. Her every move was reported in the L.A. Times, she received tons of fan mail, gossip reported about her was almost uniformly positive, and she was praised as highly talented by some of the best actors and directors of the day. Soon, though, I found that Marie Prevost, despite her significant fame in the 1920s, would have been completely forgotten had it not been for her untimely death; because of this, accurate details about her were ridiculously hard to come by.  So I, of course, invented the job of retrieving as much info about Marie as possible, then decided I was the best person for said job.  This is a totally healthy way to approach any hobby, by the way.

Much of what we know about Marie’s early life and career was mangled deliberately by Mack Sennett in an effort to spice up the publicity. I suspect that Sennett kept records but didn’t bother to organize them… but Brent Walker did. His Mack Sennett’s Fun Factory has probably the most complete collection of Sennett material and records available, and it’s exactly what I need for this project; however, neither the local library nor the university library will get a copy of it (low demand, high price) so I’m kind of stuck for the moment. Trust me, owning a copy of that book is my immediate mission. Donations to the Get Stacia A Copy Of Brent’s Amazing Book Fund can be made via my Paypal link in the sidebar –>

I’m only partly joking about that.

Sources are also a problem. The last primary sources of information on Marie died in the 1960s.  Most secondary information online, especially that on the IMDb, was provided by volunteers, and as you can see from my notes below, even those who signed their names to the information are impossible to contact or no longer remember their sources. If any of these provided incorrect info as someone did with “The Locked Door,” then I’m out of luck.

It doesn’t help when online databases have wacky misspellings of Marie’s name, like the BFI, who here spelled Marie’s name as “Marrie Prebout.” Pfft.

As for the Marie Project, anything dating from before about 1921 is going to be hard to verify, although I promise if I get better information, I will come back to correct what I’ve previously written. My goal is to make the Marie Project a significant online source of information about her. It’s significant enough that other websites are already stealing what I’ve written! I’m so proud!

***
On to her films. Her next four films may or may not exist anymore.  If there is nothing written next to the title, that means I know absolutely nothing about it:

* “Better Late Than Never” (1916): The All Movie Guide detailed description makes me think it might exist; however, I can find no confirmation as of yet. I have tried contacting the author of that AMG summary with no luck, so I don’t know where she got all her information.

* “Unto Those Who Sin” (1916): Again, the AMG summary is very detailed, but this time, TCM also has a summary. It should be noted that Denny Jackson contributed a bio of Marie on the IMDb stating this was her first film, and I emailed him to ask for his sources. He sadly did not remember anything except that his sources were some books on early Hollywood actresses.  It appears Denny’s sources may have been wrong, as you will see below under “Secrets of a Beauty Parlor”. With the information found online, though, I think it’s possible that “Unto Those Who Sin” exists in some form and is Marie’s first film. “Those Bitter Sweets” probably isn’t.

Marie in a Bathing Beauty promotional photo circa 1917.

* “Sunshine” (1916): I know nothing about this except it’s not a Fox-Sunshine comedy, despite the title and some of the actors.

* “A Scoundrel’s Toll” (1916):  Marie’s sixth film, another Sennett short. The Library of Congress has a print which, according to their Motion Picture Conservation Council quarterly reports, that was sent to “quality control” in 2001.  I presume other prints exist, as back when I started compiling my Marie Prevost master list, I noted that this had been seen at a film festival in 2008.  The problem is that I wrote down that it was the “LaSalle” film festival, which apparently does not exist. Such are my impressive note taking skills.

Since that time, I discovered “A Scoundrel’s Toll” has been released on a 2007 DVD set. Sadly, it appears on the “Kings of Comedy: Masters of the Silent Screen” DVD set, which is … odd. Yeah, “odd” is the least libelous way for me to put it. The shorts in the set are presented edited down to clips of only a few minutes’ length, and Madacy Home Video has added sub-par sound effects and narration. I guess they thought viewers needed a narrator to help us follow the complicated plots. Come on, Madacy Home Video, was this necessary? You couldn’t have released the shorts in full? “A Scoundrel’s Toll” is only available on DVD in this form, as far as I know, and this form has no sign of Marie.

The only still from “A Scoundrel’s Toll” I’ve ever seen is here at Bruce Calvert’s amazing silent film resource site.

The next three shorts of Marie’s were also Sennett films: 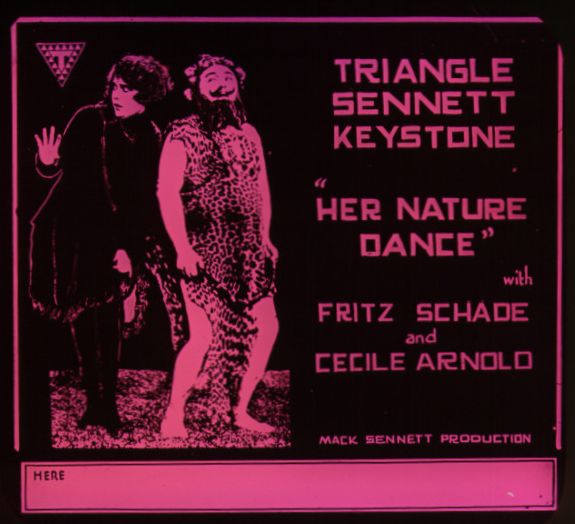 The Grey River Argus in New Zealand has been archived online, and you can see movie listings for “Her Nature Dance” here and here. An ad also appears in the Ashburton Guardian here.

The Kansas State Historical Society has the censorship records from the state Board of Review online, and they are always a hoot.  Here you can see that they wanted to eliminate “CLOSEUPS ON ALL NATURE DANCING – ALL SOLO DANCES – MAN SWINGING WOMAN IN HIS ARMS” in the film. Eliminating all nature dancing in a short called “Her Nature Dance” would very likely make this the shortest short ever shown in Kansas.

Note that Eve Golden in Golden Images: 41 Essays on Silent Film Stars says that “Her Nature Dance” was Marie’s first film. Again, it seems that information on Marie’s early works is so difficult to come by that there is no real consensus on what her first film was.

* “Secrets of a Beauty Parlor” (1917):  This is listed as preserved and restored by The Film Foundation and currently resides at the American Film Institute.  It is the only Marie Prevost film listed at Film Foundation, by the way.

Government Attic has the Library of Congress quarterly Motion Picture Conservation reports (warning: PDF) which show this short as having been shipped to a collection (I assume they mean AFI) in 2002.  It was shown at Slapsticon in July, 2005.   I have seen a whopping two (2!) people talk about seeing “Secrets” and they both thought it sucked, so it’s not likely to be in any compilation releases any time soon.  I do want to note that Denny Jackson’s aforementioned IMDb bio of Marie indicates that she didn’t work between “Secrets of a Beauty Parlor” and “Uncle Tom Without a Cabin” made two years later.  This is patently false, as Marie is verifiably in many films between “Secrets” and “Uncle Tom”, and by “verifiably” I mean I’ve either seen these films myself or have seen movie promo material that clearly has her in it.

In the next Project entry, we’ll finally get to see Marie!

***
This post originally appeared at https://www.shebloggedbynight.com/2010/11/marie-prevost-project-2-scoundrels-toll.html and a copy can be found at the Internet Archive here.

If you’re interested in using these posts for research, please note:
1) You can use my blog posts for sources, but they must be credited in footnotes or bibliography (as should any book, blog, magazine, or other source). You cannot just cut and paste sections of my blog into your own work. Please know that I will not just ignore copyright infringement, should it occur.
2) There may be errors in my blog posts. You’re responsible for doing your own research and verifying anything you read.
3) I will not help you with your Marie Prevost research. Please don’t ask.
4) I own some memorabilia, photos, archival docs, etc., but I do not lend them out for any reason. Please don’t ask.
5) Despite any claim you may have heard to the contrary, I have not assisted nor collaborated with anyone in their book or article on Marie Prevost.