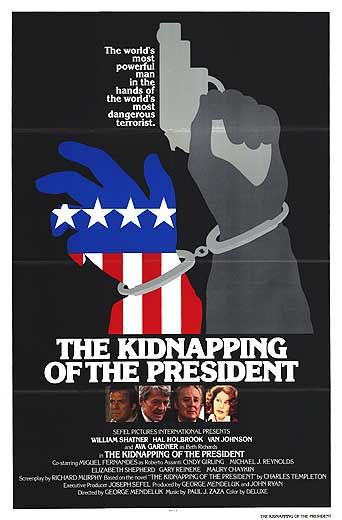 I know almost nothing about “The Kidnapping of the President.” The movie is based on the 1975 novel of the same name by Charles Templeton, who had a lengthy career as an evangelist turned agnostic turned politician turned author turned newscaster. It was released by Crown International, who also released “Deathrow Gameshow”; this explains why KotP and “Deathrow Gameshow” are available on a single DVD. Crown International is also responsible for movies like “Prime Evil”, which I won in the recent Chuck Norris Blogathon and have been wanting to see since approximately 1988, and “Sextette”, the infamous glorious atrocity starring Mae West.

Also, Stompy, the head of the Chase Masterson Official Fan Club, tells us in this thread that he was an extra in the film! That’s cool. That’s the kind of thing I’d love to be able to tell people.

KotP was a theatrical release and appears to be a relatively early example of a genre that became popular in the 1980s and 1990s, the action-packed political thriller. But as fun of a B movie this film is, I can’t figure out why it was made, and that’s what I mean when I say I don’t know anything about it. Someone just decided to make the book into a movie, I guess.

I bought a copy of KotP back in 1902 or so, a huge VHS monstrosity released in 1984 which is cheerfully labeled “Storage Case Included.” Yay! I love the cover, which is just a blurry screen grab of the president looking confused while he’s getting handcuffed to a bomb-covered terrorist.

OK, so, the plot. The opening credits is a montage of footage of presidents with their bodyguards, all presidents from FDR to Nixon, although LBJ is skipped for reasons that I couldn’t even begin to speculate on. Immediately we go to somewhere in South America where guerrilla terrorist Roberto Asanti (Miguel Fernandez) is chasing dudes down and terrorizing them.

Here is where I thought I had made an amazing discovery. One of Asanti’s henchmen: 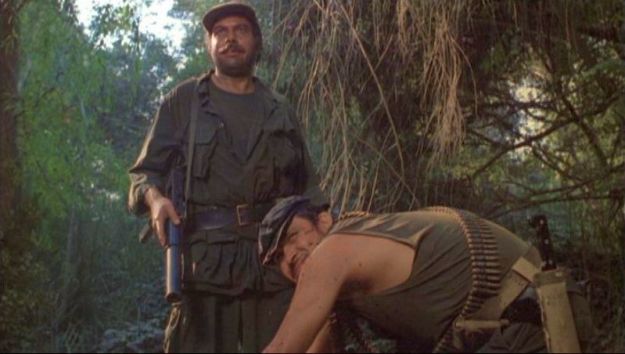 looks like Bruce J. Mitchell. I finally realized it was actually character actor Mina E. Mina who, when sporting the traditional Canadian hockey hair, looks a lot like Mitchell. Anyway, Asanti kills and terrorizes, terrorizes and kills, then slashes the throat of his rich blonde American sympathizer girlfriend. 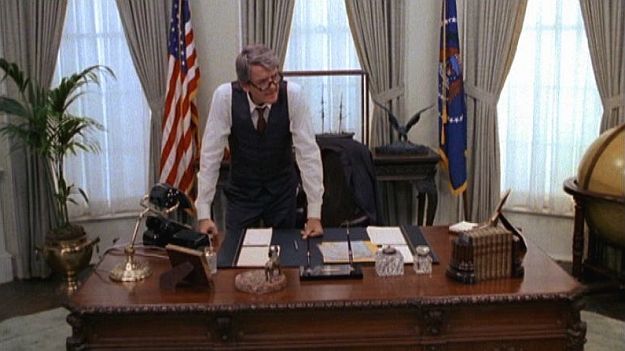 We fade into the Oval Office where President Scott (Hal Holbrook) is discussing a problem with what I assume is the CIA; namely, that the Vice President (Van Johnson) has been selling secrets or something. I dunno, this seems to be an important plot point but it goes nowhere. The Veep is married to a shrewish wife (Ava Gardner) who pushes him to be ruthless, which is why their few scenes in the film all look like this: 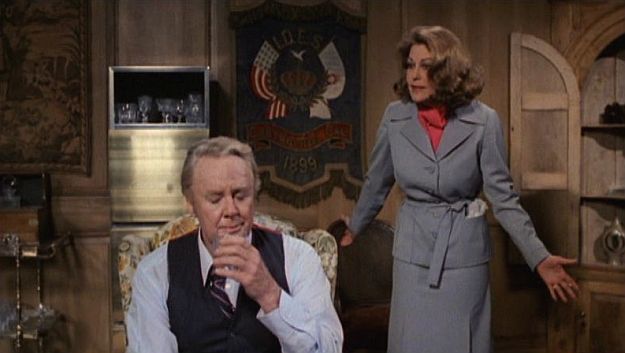 She’s screaming, he’s drinking, I’m dying of laughter. While meeting with the CIA guys, Secret Service men Standler and Jerry O’Connor (Shatner) insist on seeing the president to let him know about the danger terrorists, specifically Asanti, pose on his upcoming trip to Toronto. The president doesn’t care, he just doesn’t want to be bothered with all this safety and security nonsense. One of the CIA guys, Deitrich (Gary Reineke), snots off to Jerry and is met with this look: 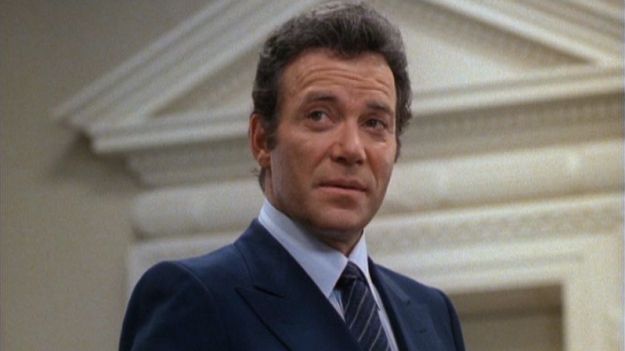 After all this blah blah blah, El Presidente decides to tell the Veep he has to resign. Van sadly agrees to resign when the president returns from Canada.

Meanwhile, Asanti makes it to Canada and hooks up with two colleagues. One is Linda, the sister of the woman he killed in South America. He lies to her about how her sister died and later pushes himself on her in this awful “if you just grope a woman long enough she’ll succumb to your desires” scene. The 3rd member of the trio is Harvey, played by Maury Chaykin, a character actor who has been in a million things and who I really enjoyed as Nero Wolfe in the 2000 TV series. Harvey is basically the Severn Darden role in this movie, and while I like Chaykin, the whole time he was on screen I was daydreaming it was really Severn instead. Sorry, Maury.

Asanti, Linda, and Harvey have a Brinks truck they have rigged with electronically-controlled explosives, so the day the president is in Toronto they set out for the big city in their truck. Along the way, they stop because of radiator trouble and catch the attention of some policemen. Harvey is killed in the ensuing shootout and enormous explosion — the price of the ticket is worth it for this explosion, by the way — and Linda and Asanti manage to escape. In Toronto they get into closed-off streets because the Secret Service is kind of bad at their job. Asanti and Linda sneak into the crowd and Asanti manages to cuff himself to the president. 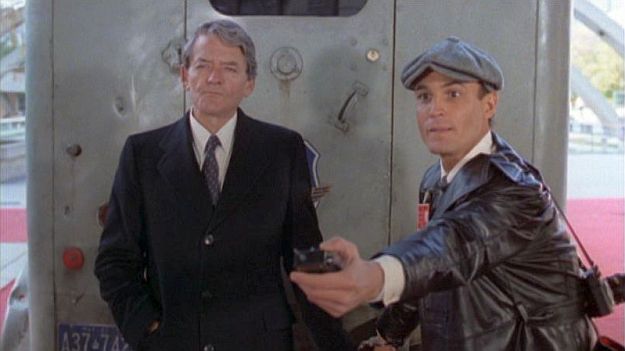 The president is not amused. The president is such a dingdong in this movie, I swear. You hear him over the radio at one point talking about how the gas shortage could be averted if people just wore long johns in the winter like he used to do. He actively ignores what the security men tell him and gets himself handcuffed to a psycho, which only irritates him. He’s all “Assholes, just shoot this guy so I can get on with my life” despite the fact that Asanti has told them he has a partner in the crowd somewhere who will push the button and blow everyone all to hell if anything happens to him.

Jerry is in charge of the Secret Service security detail right now because Standler accidentally had a heart attack on the flight to Toronto. Jerry is kind of ineffectual and overly worried, as one could tell during his security briefing moments before the handcuffing: 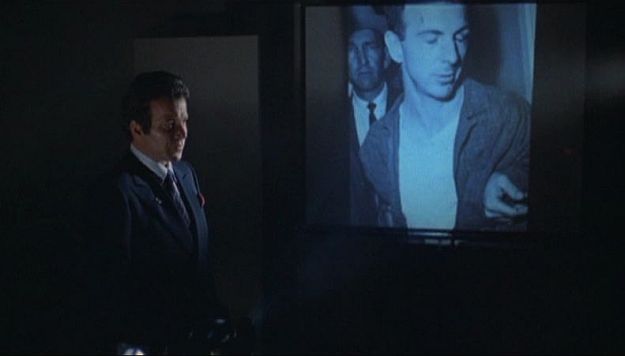 The implication is that Jerry was there in Dallas and part of the failure to protect JFK. So between his internalized insecurity and his extensive knowledge of Asanti’s ruthlessness, Jerry becomes frazzled. He doesn’t have a choice but to let Asanti take the president into the Brinks truck. A second later the CIA guys, led by Jerry’s nemesis Deitrich, arrive and are pissed all to hell that Jerry let the president get taken into the truck. 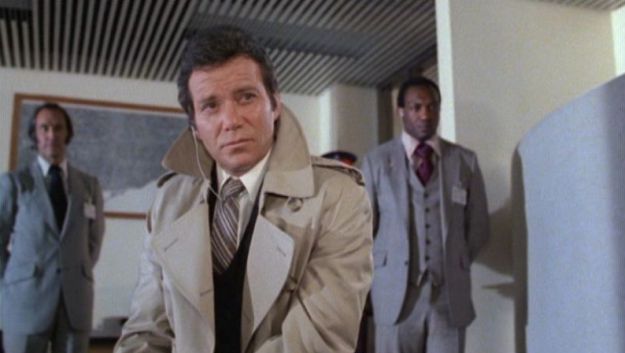 Asanti cuffs the pres inside the vehicle and comes out, informing everyone that the truck is rigged and if he doesn’t show himself to the crowd every half hour to let his partner know he’s all right, she will blow the truck up. But it’s going to blow up in 3 hours anyway if he doesn’t get his demands. He does the standard demanding of money and a plane thing, but nothing about his political causes, which is weird. We never get any real feeling for why Asanti did this other than he’s just a really mean guy.

Meanwhile, in the mostly-forgotten secondary plot, the Vice President has to choose what to tell the Secret Service to do: Negotiate with the terrorist or let the terrorists kill the president if the Secret Service can’t rescue him first. His wife wants him to negotiate so it looks like he tried to save the president, but the Veep sticks to the country’s principles and refuses to negotiate.

So the race is on to find his partner in the crowd, disarm the truck, rescue the president, and probably kick Asanti’s ass if they have a few minutes to work a beatdown in. I won’t spoil the ending, but I’m sure you can all guess whether Jerry saves the president or not. 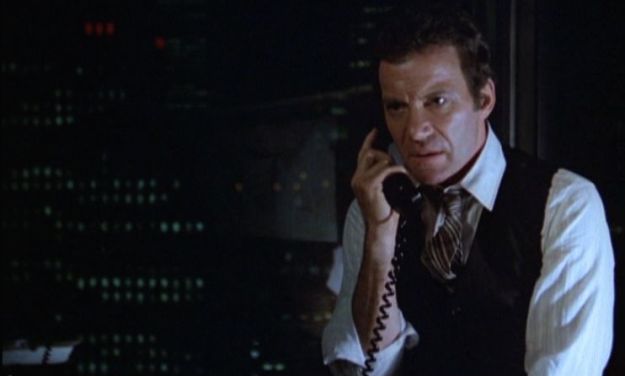 This is really not that bad of a movie, although the plot is rather implausible and the ending will cause some mild to moderate eye rolling. There are some good scenes, some action, and a disturbing and off-beat moment with a freaked out hippie dude. Every actor gives a solid performance, nothing overtly impressive, but there were no missteps or ridiculous scenes, either. William Shatner does well as a conflicted agent who doesn’t want to lose another president while on the job, but who also knows that the U.S. can’t cave in to terrorism. The low budget means there are a few cheap sets, but the use of outdoor shots, good lighting and cinematography mitigate that quite a bit. The current DVD release is a nice print, maybe a little soft, but it’s in widescreen and is easily one of the best looking of the cheap release DVDs I’ve seen.

** I’m running a little late today, so if you have any submissions you have a few hours to get them in. The submission post will be up early this evening.