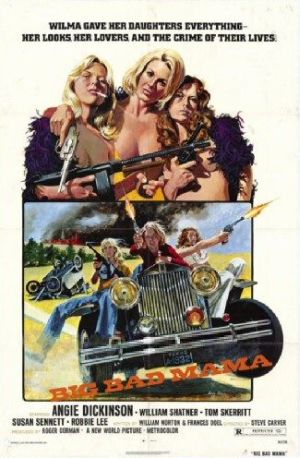 Big Bad Mama (1974) is an unabashed Bonnie and Clyde rip-off, stealing plot points and iconic moments from the 1967 film with abandon. It is also base exploitation; as in many Russ Meyer films, female character are strong and powerful, but they use sex as a vehicle to get what they need, which inevitably leads to a lot of female nudity that is less celebration than it is exploitation.

That’s not to say there isn’t male nudity in BBM, too. In fact, this is very likely the nudiest nude you will ever see William Shatner. And it’s very nude. No dangly bits are shown, but there was a moment there where I was sure we were going to see full tackle.

The plot, such as it is, involves Wilma and her two teen daughters — played by women in their early 20s, by the way, so don’t freak out — living in Paradise, Texas in 1932 and heading to the youngest daughter’s wedding. The girl is so young she’s still carrying dolls around, and the boy she is marrying truly is a boy. During the ceremony, Wilma stops the marriage and says it’s no life to have to live dirt poor with no other options. After a comedic banjo-themed scuffle in the church (the IMDb says Jerry Garcia played banjo for the film) she and her daughters go on the lam with a slick bootlegger known as Uncle Barney. 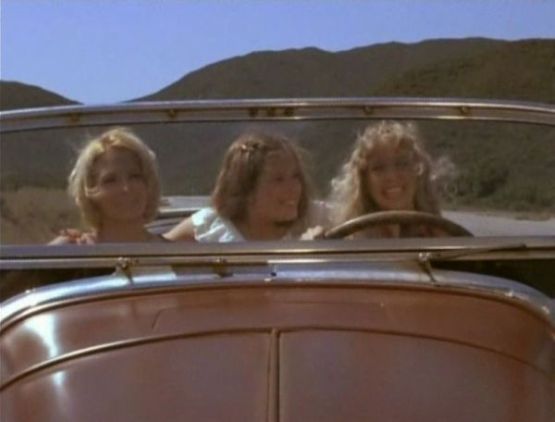 Unfortunately, Uncle Barney is wanted by the cops, and is shot during their drive. Wilma gets the family away from the cops, goes back to Barney’s bootlegging business, and takes over deliveries. They make good bank, too, until one of her daughters is caught naked and in possession of delicious bootleg gin with the sheriff’s son. A large bribe later and the daughter is free. They’re poor again but Wilma has a plan, a plan that involves Uncle Barney’s gun.

Lest one forget this movie has its fair share of sexist exploitation, Wilma’s two weapons of choice are gun and purse. Yes, she swings her purse around and conks guys on the head with it a lot. It’s pretty irritating.

Wilma works as a waitress to make a little money but finds no one bothers to leave tips. Meanwhile, her daughters sneak off to make money stripping at the local VFW stag night. Interestingly, Travis Mackenzie Hoover at Film Freak Central believes that Wilma thinks her daughters are good girls, that they truly were coerced into stripping by vets at the men’s smoker. I have to disagree, mainly because Wilma is right there watching when her daughters act “bad” most of the time. She does not, however, think bank robbing and sex necessarily make her girls bad, and I think that’s the distinction here.

While Wilma is trying to cash a fake check, bank robber Fred Diller (Tom Skerritt) and his gang bust in and rob the place. While the cops and robbers shoot it out, Wilma takes some of the cash and leaves, but Fred escapes and hops in the car with the women. Wilma and Fred team up as lovers and partners in crime, making her daughter Billy Jean jealous. 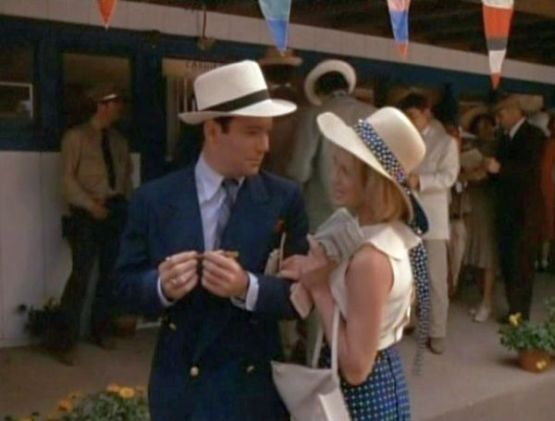 Soon, at a racetrack, Wilma meets up with suave scam artist Bill Baxter (William Shatner, who doesn’t even show up until 45 minutes into the film). He’s cultured and obviously accustomed to a good life, but has no money of his own, earning it through racing and gambling scams. Wilma, who didn’t want just money but a way into society, is immediately attracted. She latches on to Bill while Fred stands by, jealous and aghast. They all share a house, so Fred is even less amused when Wilma and Bill sleep together almost immediately after meeting.

Billy Jean (Susan Sennett) makes her move and grabs Fred for herself, which he initially seems reluctant to do, but he’s an idiot who humps anything, so he was never that reluctant. A few days later they invite the youngest sister Polly (Robbie Lee) into their bedroom escapades because “she’s lonely.” After Polly gets shot in the arm during a heist of an oil company, everyone finds out she’s pregnant with Fred’s child.

Fred is a pretty dim guy, kind of reckless, never thinking things through, and I found him entirely unlikeable. While Wilma obviously enjoyed being with Bill, I think we’re supposed to believe Fred is her real passion while Bill is a man she can make more money with. Bill, however, doesn’t like the violent route their crime spree takes them on. He’s more of an urbane con man than a bank robber and he urges Wilma to stick with him for safer ways to make money. With a pregnant daughter who just got shot, you’d think Wilma would take him up on the offer, but inexplicably she does not. 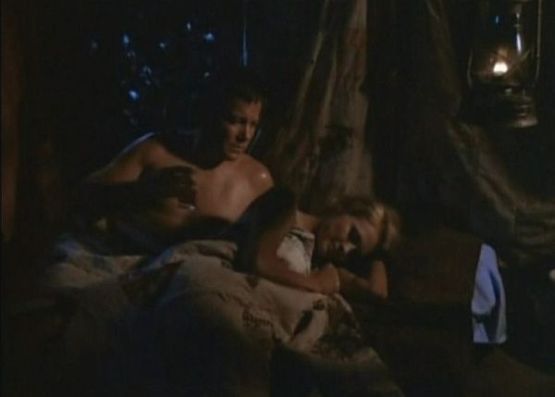 Her attraction is to the strength of the men, and while Fred is a big damn waste of time who screws everything up, he’s stronger than Bill. And she doesn’t respect Bill, either, never calling him by his first name and never showing him affection. I just can’t with Fred, really, he’s a complete tool and, while Bill is not an optimal partner, Fred is so hopeless that I can’t see why Wilma would stick with him. Especially after the confrontation on the beach after finding out Polly is pregnant. Wilma justifiably slaps the hell out of Fred after he shrugs about getting Polly pregnant and insults Bill out of petty jealousy. 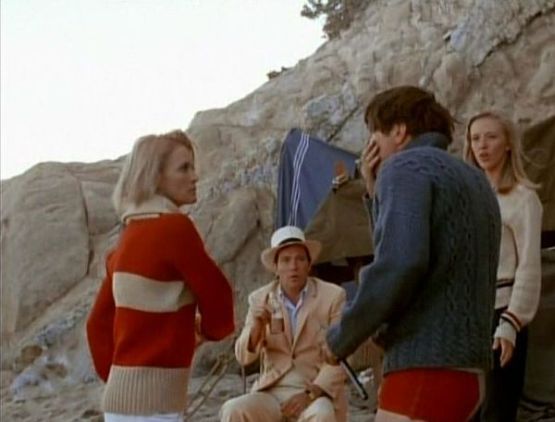 Bill sits by, drunk and ineffectual, and while that attitude is supposed to be the reason Wilma doesn’t like him, it also seemed like Bill was the victim of an unconscious bait and switch. He’s sold on the idea of working with Wilma for scams but is immediately thrown into armed robbery instead, and then finds himself in a gang where a violent and jealous Fred pulls a gun on him for almost no reason. Leaving would be dangerous, plus he genuinely cares for Wilma. The character barely works as it is because he’s essentially victimized by the anti-hero leads, so he’s not seen as pathetic but as sympathetic because of his circumstances, which I don’t think the filmmakers intended. If Shatner hadn’t played Bill Baxter with some comedic pathos, it just would not have worked at all.

When Polly gets pregnant, everything breaks down: Fred gets flustered, Bill starts drinking, and Wilma gets the insane idea of crashing a high society party and kidnapping the rich spoiled daughter of an oil tycoon. 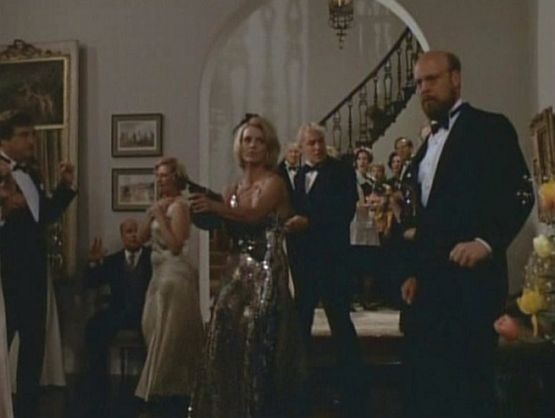 When I screencapped this, I realized that the party goer on the right was Paul Bartel. “Holy shit, that’s Paul Bartel,” I said to myself. Actual quote.

So the rich girl gets kidnapped. While Wilma and the girls are out at a pay phone making the ransom call, Fred and Bill get into a fight. The tense situation is diffused, but Bill refuses to help with this kidnapping scheme, so Fred goes to check on the rich girl. She seduces Fred (which takes like no effort, of course) and escapes by kicking him in the nuts. Bill had been watching and could have stopped her but he doesn’t, so when she takes off, he does as well. They re-capture the girl but Bill doesn’t return… until later, during the exciting conclusion that I will not spoil for you. 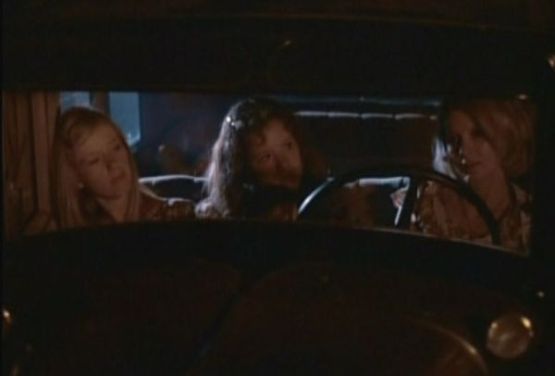 Big Bad Mama is available on a special edition DVD which, if reviews are any indication, has the same color problems as the TCM copy I saw, and which is in fullscreen instead of widescreen. Lots of scenes are cut off because of this, and since the DVD is out of print and selling for $17+ on Le Interhole, I’m uncertain that it’s worth it. Which isn’t to say I didn’t like the movie because I did, I honestly enjoyed it, but I am only capable of loving movies that are 100% Tom Skerritt free.

** Note: Today is the last day for submissions! I will be posting the Shatnerthonians list later this evening so you have a few hours left. 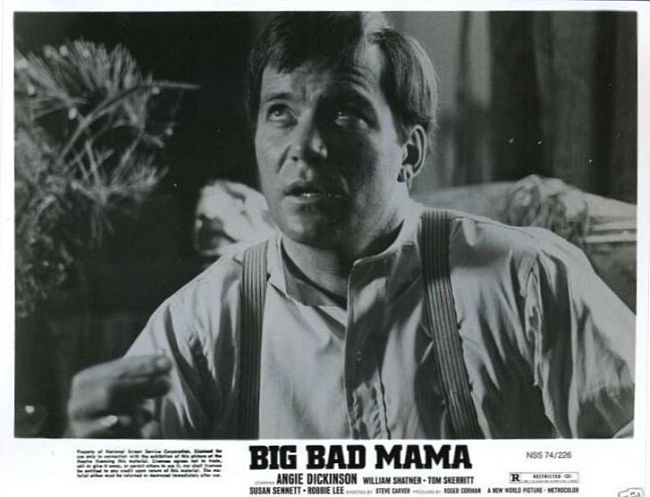