Welcome to the first installment of Short Subject, Feature Film, a name that took hours to come up with, so feel free to bask in its genius. First up is the short, an early Technicolor romp called “Okay, Jose” starring my friend and yours, El Brendel: 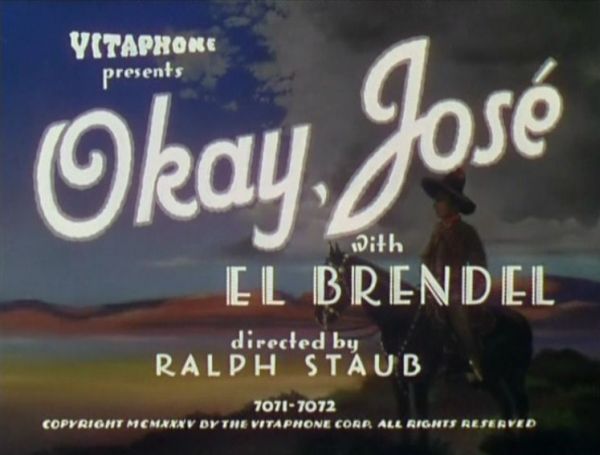 If you’re wondering how 1935 Technicolor could look so amazing, thank TCM, whose print of this short is astonishingly good. Louie at Give Me The Good Old Days! alerted us to this short a few months ago, and I finally got around to watching it recently. I shamefully admit I laughed. A lot.

El is Knute Knudsen, hapless Swede, whose car breaks down in Mexico. Extremely dangerous bandito Jose (Julian Rivero) happens by and gives Knute a ride on his horse. They get drunk in what is the funniest part of the film. 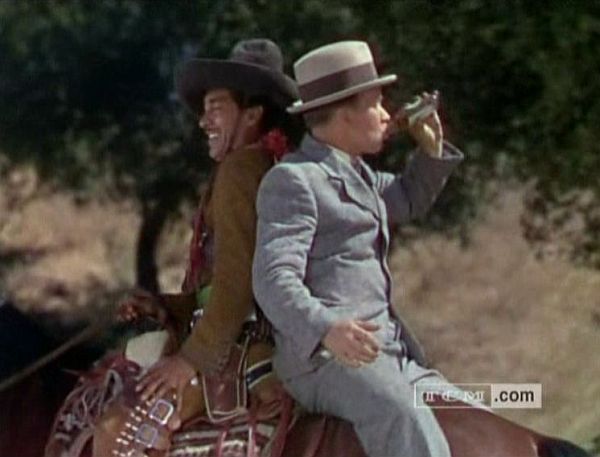 La policia arrive and arrest Knute while Jose gets away. They think Knute is in cahoots with el bandito, but Knute talks them into letting him out so he can capture Jose and bring him back. If he succeeds, they promise they will let him go. Knute disguises himself as a bandito and catches up with Jose, telling him that he knows where some beautiful blonde girls are that Jose can, erm, date. El’s disguise is silly, but his accent is all over the place, sometimes Swedish, sometimes Mexican, sometimes French, and it absolutely cracked me up.

Knute went into the plan assuming la policia would obtain a beautiful blonde girl, but they refused, so Knute was left to his own devices: 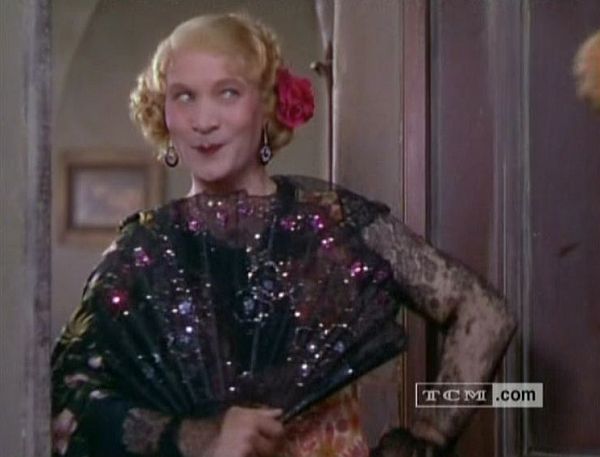 There are many entendres once Knute shows up in a dress, the funniest being when Jose’s girlfriend asks what Knute has that she hasn’t got. There’s a fleeting look on Knute’s face that conveys, “Are you talking about my penis? How rude!” I am a sucker for dick jokes. Poor Jose gets captured despite being the most likable person in this short subject, and all ends as well as it could end with El Brendel in drag. 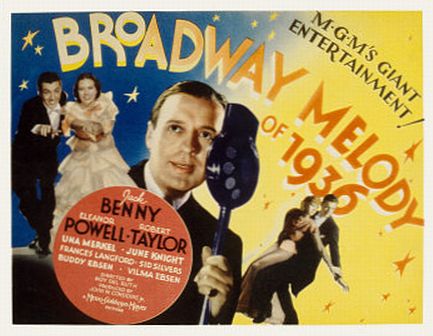 Today’s feature is Broadway Melody of 1936. I watched this because I am on a huge Jack Benny kick lately, although I have discovered that he is usually not used to his full capabilities in film. Radio and television seemed to showcase his talents better which, to state the obvious, is certainly why he was more successful in those media than in film. Which is too bad, because he looks pretty good in glorious nitrate-laden black and white film. Yeah, you heard me: Jack Benny is hot.

It’s not just Jack, though. This entire film looks damn hot, and boy, did I want to like this movie. It’s your typical singing-dancing-romancing extravaganza with luscious costumes and set pieces. It introduced one of my favorite songs, “I’ve Got a Feeling You’re Fooling”. It has Jack Benny, Una Merkel, Robert Taylor, and June Knight who I loved… …despite someone in the makeup department trying very earnestly to make her look like a poodle.

Broadway Melody of 1936 was nominated for three Oscars including Best Picture, and it won one for Best Dance Direction (the “I’ve Got a Feeling You’re Fooling” number).  The film was a huge hit that spawned yet another “Broadway Melody” sequel.  Yet I just couldn’t like this movie.

Confession time: Eleanor Powell rubs me the wrong way. I honestly don’t understand why the studio was trying so hard to make Eleanor Powell happen. Her fast tap is impressive, but in the spectacular silver “You Are My Lucky Star” dance number in this film, you can see clearly that she favors one side of her body to another. As I’ve seen it before in other dancers, and there is probably a term for this, but I couldn’t tell you what it is. It’s distracting and it prevents the dancer from achieving symmetry. In Powell’s case, about halfway during this number, she does a high kick alternating her legs, and her left obviously kicks higher and easier than her right. Her right arm is similarly less graceful. However, there are some obviously bad chorus dancers in this number, too. You can see them screwing up frequently, either out of time or doing the wrong move. Perhaps this number wasn’t rehearsed well. Still, Powell can’t act and she certainly can’t sing: She’s dubbed by Marjorie Lane. 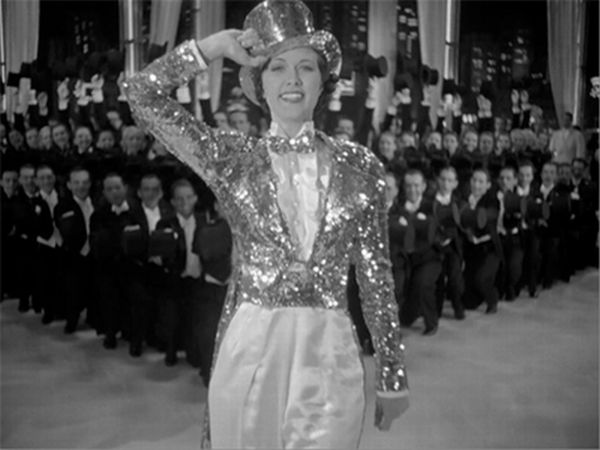 When I dislike a film personality that is almost universally praised — and face it, folks, this happens a lot — I always wonder if there’s something about me that keeps me from really getting a performance. Maybe I’m quirky.

Speaking of film personalities everyone else likes but me, am I the only one who is freaked right the hell out by Buddy Ebsen? He’s fine in Breakfast at Tiffany’s and he’s the second best part of “The Beverly Hillbillies” — the best part being the way professional hunk o’ stuff Max Baer fills out his jeans (stop judging me!) — but he always gave me the creeps on “Barnaby Jones” and in old movies. If you want to scare the shit out of me, and you will, make me watch the dance number with him and a tiny little Judy Garland in this film’s sequel, Broadway Melody of 1938. 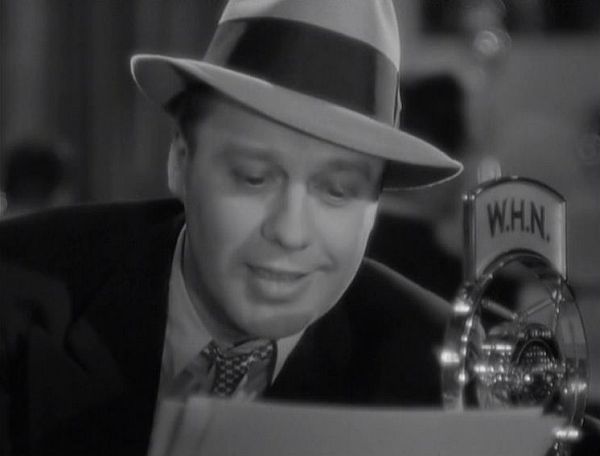 Jack Benny is Bert Keeler, gossip columnist for a big radio station. His boss is mad because all Keeler reports on are actresses who are expecting a “happy event”. He demands Keeler get some real dish, and Keeler accidentally stumbles onto a doozy.  Actually, his sidekick Snoop stumbles upon it, but the less said about Snoop the better. I’m pretending he doesn’t exist. 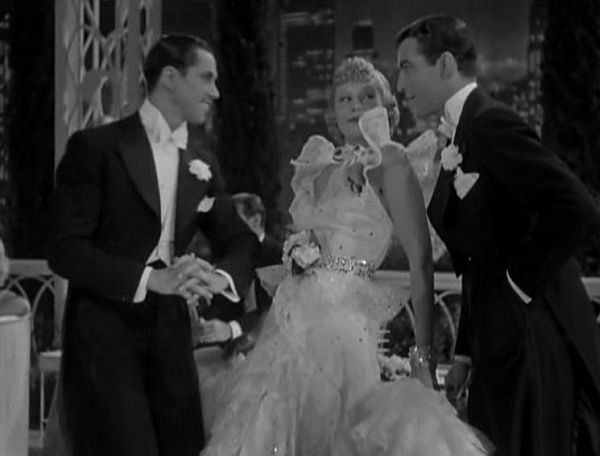 Broadway producer Robert Gordon (impossibly hot Robert Taylor) has taken up with rich widow Lillian Brent (June Knight) so she will finance his next play, on the promise that she will get the lead role. Gordon is so upset by Keeler reporting this in his gossip segment that he storms into Keeler’s office and decks him; punching Keeler becomes a running gag. Keeler plots revenge by creating a fictitious French actress newly arrived to the States, hoping that Gordon will clamor to hire her for the lead in his play, causing all sorts of trouble for him with the rich widow and ending in embarrassing publicity. 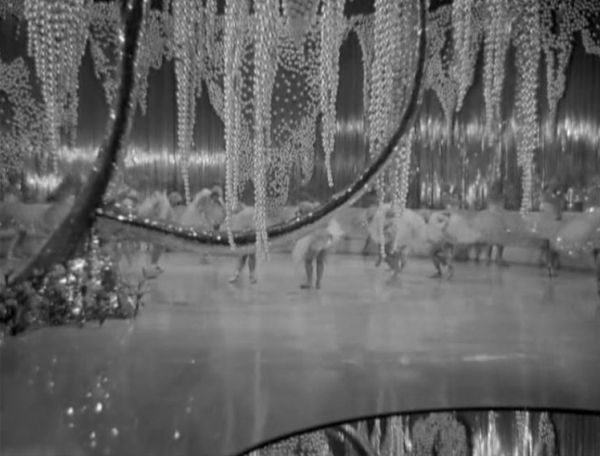 Meanwhile, Irene Foster (Eleanor Powell) shows up in town, looking for Gordon. They dated in high school and now she hopes he’ll get her a job in one of his shows. Gordon tells her to go back home, but his secretary Kitty (Una Merkel) helps try to get Irene a job. Wacky hijinks ensue, resulting in Irene pretending to be the fake French actress. Music and dancing happen along the way. Happy endings are ensured. 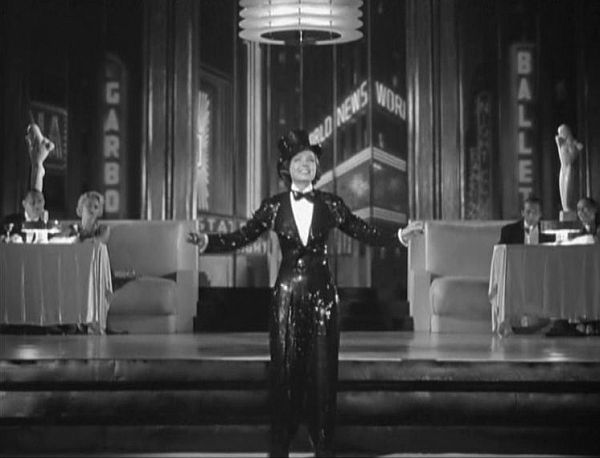 This is Frances Langford in the final “You Are My Lucky Star” number, in a delectable tux in front of a fabulous art deco set. Check out the neon on the left. There are several references to Garbo in this film, mainly Taylor twice saying a woman is “his Garbo.” This is a little jarring, as Broadway Melody of 1936 came out a year and a half before Camille, and there doesn’t seem to be any actual reason to conjure up Garbo for this film, at least not to the extent that they do. 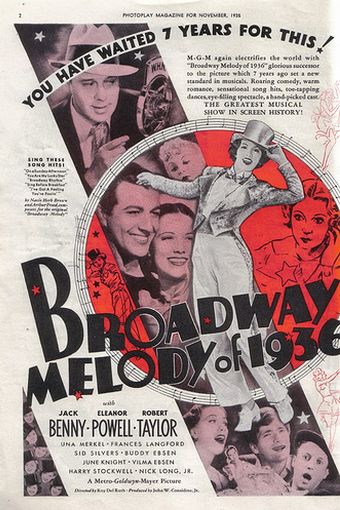