That Certain Woman (1937) is, thus far, one of my favorite Bette films and a real delight to stumble upon during this Project. Sadly, my copy of the film is poor, which you’ll confirm by looking at my screencaps. It’s available on DVD now, so if you get a chance to see this film, do! That Certain Woman is one of the few 1930s Bette melodramas that distinguishes itself from the others that so often feel like Kay Francis’ castoffs. 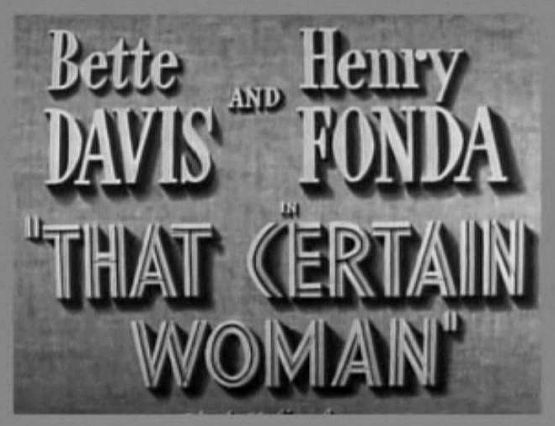 For some reason, the copy TCM has covers the edges of the title screen with a grey border so you can’t see the usual “First National Picture” credit on the bottom. No idea why. I assume it’s a re-release print with some copyright issue.

The plot of That Certain Woman is compelling in a way that your usual WB programmer isn’t. Bette is Mary Donnell, who we first see going to the cemetery on a cold, rainy evening in 1933. She’s followed there by a reporter who confronts her: She’s the former Mrs. Al Haines, widowed exactly four years earlier when her gangster husband was killed in the St. Valentine’s Day Massacre. The reporter is doing a “where are they now” series on people involved in the massacre, but Mary won’t have anything to do with it. She’s got a job as a secretary now, a new life, and is as far away from the mob as she can be. 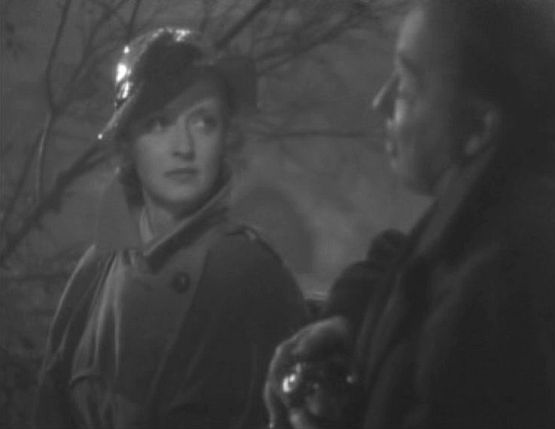 Unfortunately, the reporter knows about her new life and confronts her at her work. She’s afraid her boss Lloyd Rogers (Ian Hunter) will find out about her past, but it turns out he knew anyway. He’s smitten with Mary but, of course, Mary is smitten with someone else — a client’s son, Jack (Henry Fonda).

When Lloyd helps her out with the newspaper situation and with Jack as well, there is a moment where a positively radiant Mary runs up to Lloyd’s desk and thanks him. 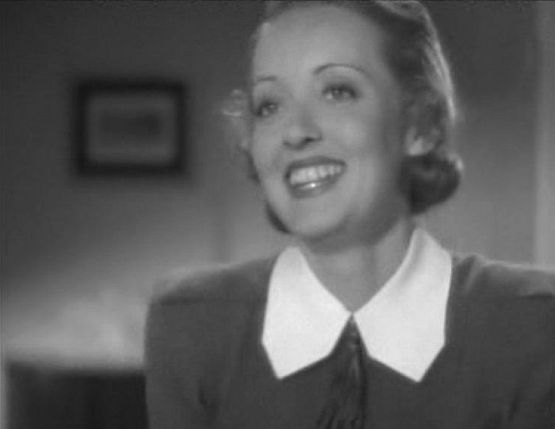 It’s an expression of undiluted joy that lasts a brief instant and is gone as Mary runs out of the office to her love. The close-up on Mary’s face is tight but doesn’t linger, although the viewer is left with the image of Mary’s happiness long after she’s left the room. When a saddened Lloyd realizes that he and Mary were not meant to be, you genuinely feel his sense of loss.

Mary and Jack elope but Jack, being your standard soaper rich boy, is coerced away from her almost immediately by his overbearing father who knows Mary’s past. In a plot point used in something like five million weepies from 1925 through 1945 inclusive, Mary is pregnant when Jack leaves and doesn’t tell him, deciding she only wants him if he comes back on his own. He doesn’t. Instead, Mary raises her son by herself with financial help from Lloyd. Meanwhile, Jack marries some society dame. He soon causes a car wreck, seriously disabling his wife Flip (Anita Louise). 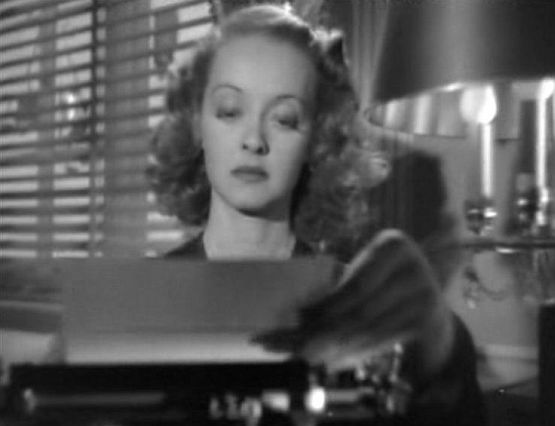 A few years pass; it’s now 1937. Lloyd, still in love with Mary, visits her while he’s seriously ill. He dies at her apartment while yet another snoopy reporter is hanging around, and Lloyd’s newly-widowed wife thinks Mary’s son was fathered by Lloyd. The press has a field day with the scandal. Even though Mary won’t reveal that Jack was really the father, Jack still discovers that he had a son and comes back to Mary, promising to divorce the now-disabled Flip and marry Mary for real this time.

Except Flip visits Mary herself and confesses she can’t be a real wife to Jack because of her injuries, she probably doesn’t have long to live, and of course she can’t have kids, so she wants Mary to take Jack so he can be happy. Mary, out of guilt and self-sacrifice and all those other things that make good melodrama, instead decides to give up her son and let Jack and Flip raise him.

At this point, the movie turns inadvertently cruel: Mary apparently goes around Europe looking fabulous and distraught, just waiting for Flip to die. 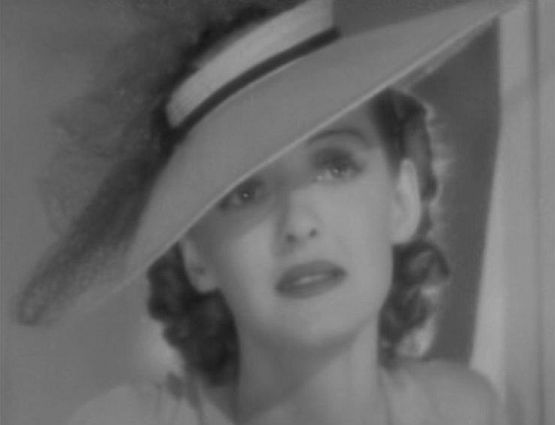 One day she gets a call from Jack that Flip’s finally dead, and she and Jack practically cheer at the news. You have to laugh, because that is some screwed up shit right there. Jack is the one responsible for the fact that Flip lived for years in pain before dying decades before her time, and he’s also responsible for Mary’s predicament in being a single mother. Why anyone thought it was appropriate for him to be calling Mary with the “good news” that his wife Flip was dead is beyond me, but I admit I enjoyed the ending immensely.

Also, Ian Hunter is terrific. I am loving the hell out of Ian Hunter right now. He is so good in these programmers because he actually works at his role, he never seems bored or like he’s holding back. (I’m lookin’ at you, George Brent. ) That said, I forget Ian is even in films like “Robin Hood” or “Ziegfield Girl,” so perhaps sometimes he doesn’t make much of an impression. Or maybe it’s just me. 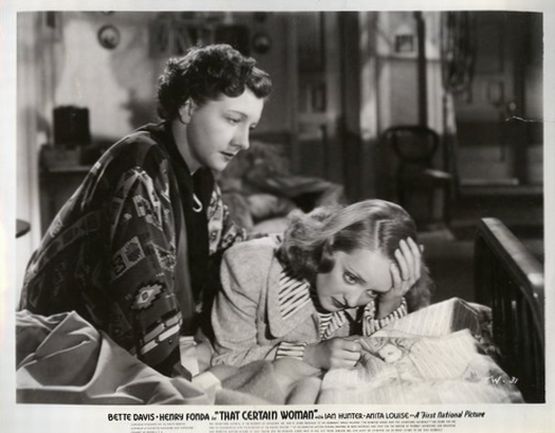 Bette rocks a lot of looks in this film. When we first see her she’s dowdied up, looking for all the world like she did in the early 1930s when at Universal, except in fashions that were out of date even in 1933. I thought that was a terrific touch, not only giving the movie the feel of 1933, but also showing Mary as a girl who hadn’t moved on from what happened to her in 1929.

It’s also obvious that a lot of effort was spent to give Bette significant movie star appeal. Bette herself said that the first time she honestly looked like a star was when director Edmond Goulding worked with her in That Certain Woman. It seems odd for her to say such a thing, since in previous years she had been in Petrified Forest and Of Human Bondage and even won an Oscar  for Dangerous, but it’s true that WB was simply not treating her like one of their big name stars. I would argue, though, that the real change for Bette came with Marked Woman released a few months earlier, and which I believe was the first film she did after her suit against WB semi-failed.

It’s hard to see because of the poor video quality, but there is a little lovely art deco in Lloyd’s office in the beginning: 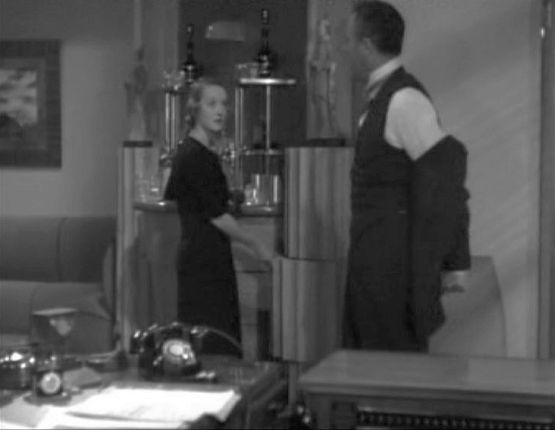 That Certain Woman is available on the WB Archives series if anyone has an extra $23.00 laying around. Silly sellers online are still charging $30.00 for their used VHS of the movie. The point is, it’s out there in legitimate copies, you don’t need to shell out for a bootleg or a nasty VHS that was a former rental copy. 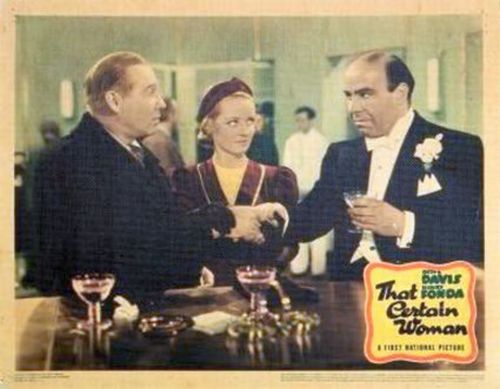