This post originally appeared on My Floating Red Couch for the Battle of the Fatheads between William Holden and Leonardo DiCaprio. Check out the entire battle for more! 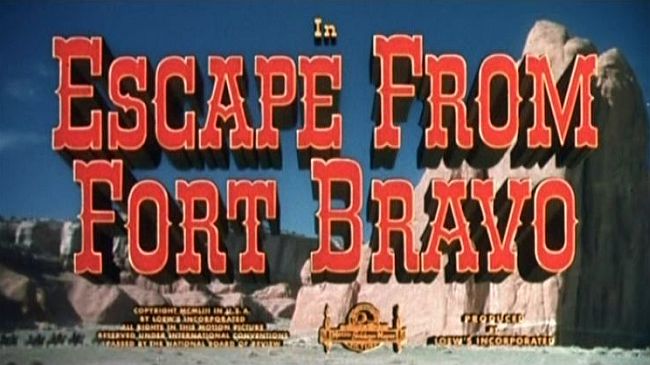 For the most part, Escape from Fort Bravo is a typical cowboys-and-Indians Western flick with little more to offer than guys in sharp blue uniforms battling against a distant, faceless enemy. At moments it threatens to veer off into something atypical and interesting but never quite manages it. Despite that, I did find the film relatively enjoyable, with the time devoted to Union Captain Roper’s (William Holden) labyrinthine emotional defense mechanisms providing the most substance.

Fort Bravo is a fictitious Civil War-era Union Army fort in Arizona, located in the middle of desert and Apache land. It’s a prisoner of war camp that holds a few hundred Confederate POWs, guarded by almost the same number of Union soldiers, the rough terrain providing the only reason the Confederates haven’t revolted and escaped. Well, the rough terrain and the “deadly Mescalero Indians,” who apparently torture and kill white people just ’cause they can. Captain Roper says that his main job is to keep the land for the U.S., no matter who wins the Civil War, and that both the Union and Rebs should take up arms against the Mescalero Apache. This evil Injun story line is tiresome, and I would have thought it was tiresome by the time 1953 rolled around, too. 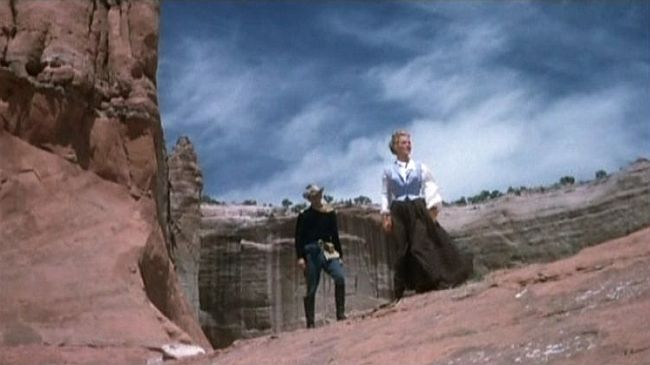 The Captain of the Confederate POWs, John Marsh (John Forsythe), plots with three other soldiers to escape, and their chance comes in the unlikely form of Carla Forester (Eleanor Parker). She coincidentally is both the secret girlfriend of Captain Marsh as well as the friend of the camp colonel’s daughter who is getting married to a Union soldier, and she arrives ostensibly to help her friend with the wedding. Her real reason, of course, is to cause a distraction to keep the hard-ass Captain Roper busy while her boyfriend and his comrades escape.

Roper has no respect or empathy for anyone, and both the Confederate prisoners and his Union compatriots dislike and distrust him. When Carla arrives and uses her wiles to distract him, his humanity starts to show as he grows to love her. Yet when Marsh and the other soldiers escape and take Carla with them, the betrayal threatens to send Roper back to his antisocial ways. 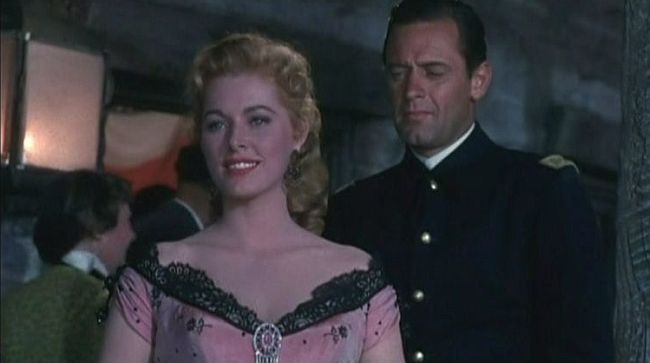 Holden’s forte is the handsome, stoic loner, emotionless except for a temper that is always set to low simmer. Fort Bravo takes advantage of all these strengths and, though his persona compares solidly with classic Western actors like Joel McCrae and John Wayne, I can’t help but feel that Holden is a bit misplaced here. Captain Roper is hated by all, home alone with no company save a servant who dislikes him and a few roses he forced out of the near-dead soil behind his cabin. Holden, however, does not easily convey quiet self-hatred borne from bone-deep weariness. Holden presents as the type of man to despair, certainly, but always in the company of others at the bar or in bed. 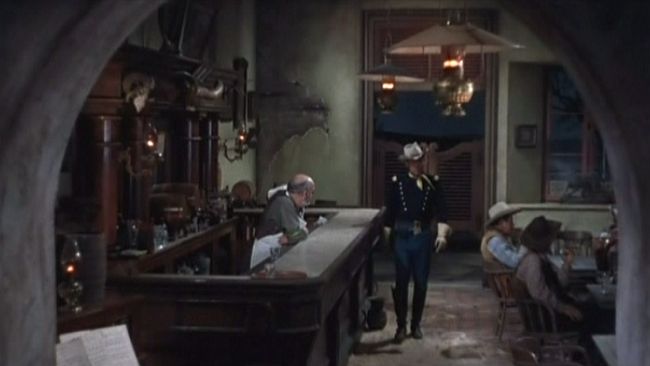 One of the more interesting elements of Roper’s and Carla’s romance is the blatant acknowledgment that Roper desires her as a sexual conquest more than he does as a lover, partner, or even friend. In other areas as well, it’s hinted that Roper cannot manage deeper emotions, and it’s highly likely that sexual desire and a promise to make Carla’s life as his wife “good” are the best it would ever get with a man who has so completely shut himself off from emotion and empathy. Carla hints at deeper character than we see realized on film, a courageous woman willing to risk her own life for the life of the man — or men — that she loves. But the shoot ’em up Western gets in the way of anything substantial in Fort Bravo, and while the showcase showdown at the end with all our main players trapped in a ravine is exciting, it also quickly becomes a play-by-play of every Western cliche available: The bravery, the buddies, the evil evil Injuns, the hero’s sacrifice, the coward learning bravery when it really counts, the Cavalry coming to the rescue at the last minute. Some have considered Escape from Fort Bravo as director John Sturges’ final move away from “prolific mediocrity,” but that would not happen until Sturges’ next film Bad Day at Black Rock.